The Center Of The Inflation Debate

The Center Of The Inflation Debate

The mainstream media is about to be presented with another (small) gift. In its quest to discredit populism, the condition of inflation has become paramount for largely the right reasons (accidents do happen). In the context of the macro economy of 2017, inflation isn’t really about consumer prices except as a broad gauge of hidden monetary conditions.

Therefore, if inflation behaves as it is supposed to after so many years of “stimulus”, then the political opposition to the status quo really is about racism and xenophobia. If, however, inflation underwhelms for now the sixth year and counting, there just might be something to this economic anxiety element of grand and growing political discord.

In many ways this isn’t a point of contention at all, merely a misreading of what policymakers are actually doing and why. The global economy really has suffered some horrible fate, but what? Inflation underwhelms because the economy does and has, but policymakers in 2017 are trying to figure out why in a way that leaves them blameless. 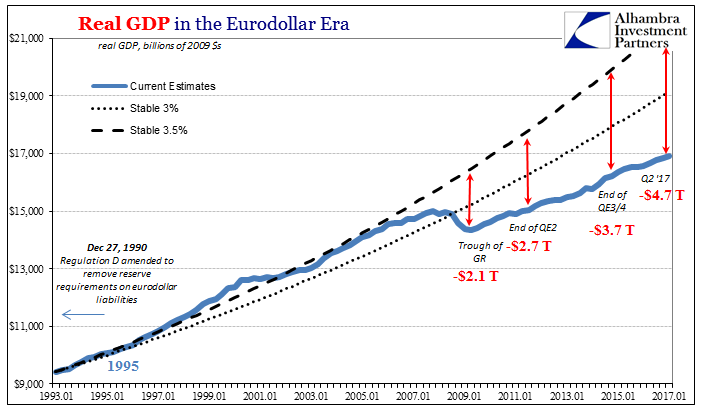 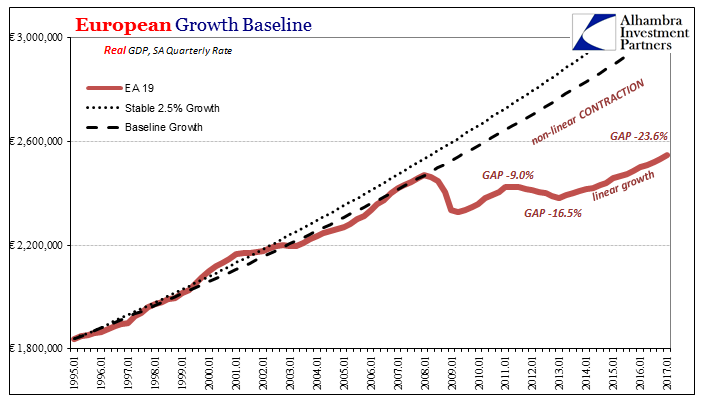 Any long-term GDP chart for any place shows clearly that it is small wonder political and social devastation took so long to start manifesting. That speaks to the power of Economics and the tremendous benefit of the doubt it began with, and then squandered. People largely believed Ben Bernanke when he said he knew what he was doing with QE2 (without ever accounting why he felt there needed to be a second) or Mario Draghi when he made his promise. The public did so because they wanted to believe such a big awful thing was fixable.

The media is still stuck on the idea of the economy being fixed, however, though policymakers have more than a year ago shifted to figuring out why it won’t ever be. Inflation for them is now the measure of who’s to blame, not what will happen.

Again, if inflation continues to underperform the 2% target here and elsewhere, even textbook Economics makes it a monetary reason. If it gets back to and above 2%, drug addicts and Baby Boomers would have been a legitimate structural drag, meaning QE failed because it stood no chance of ever working. You can see the stakes for central bankers as they have this year practically resorted to outright pleading, as if saying the thing over and over will increase the chances of it happening.

So it must have been some relief when earlier this year oil price base effects raised the CPI to above 2% for three months starting last December (and the HICP for only one month in Europe). It would stay above 2% for a total of five, but those last two were on the way back down again, clearly showing that it was oil not the opioid epidemic the public should turn to for answers. 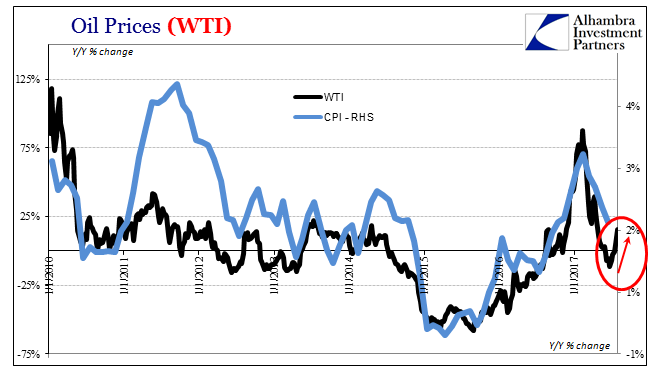 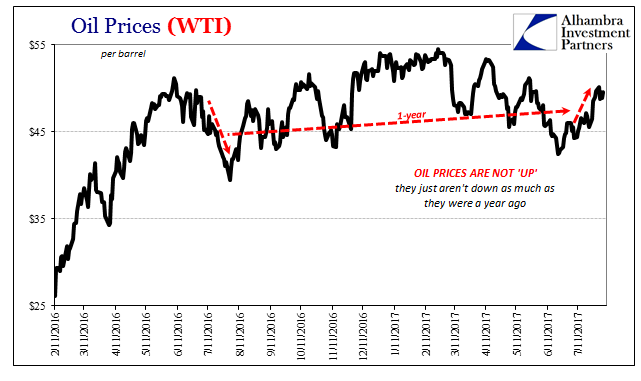 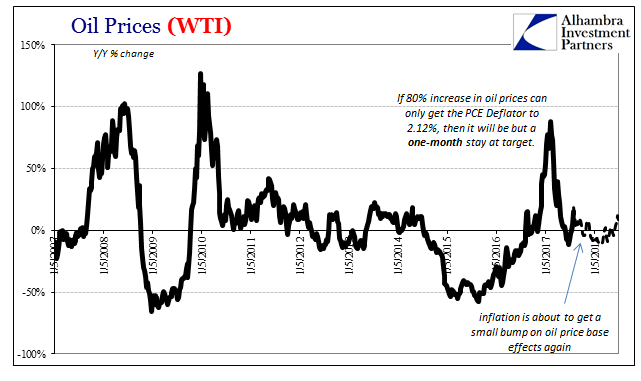 Given the nature of its annual comparison, WTI was this July on an upswing whereas in July 2016 falling again. Crude oil’s contribution to consumer price inflation last month is once more significantly positive, meaning that in all likelihood on Friday when the BLS reports the CPI for July it will be accelerated from four straight months of “unexpected” weakness. There will certainly be much crowing and rejoicing.

But it won’t matter for more than just a single news cycle, not the least of which because of the bond market that policymakers and especially economists (therefore the media) just can’t (or refuse) seem to understand.

“The market has paid a lot more attention to inflation than in recent years, simply because that has the potential to be what changes the Fed’s mind on further rate hikes,” [said Gennadiy Goldberg, an interest-rate strategist at TD Securities]. This week’s report “has a pretty substantial amount of power to push rates to annual lows or getting us off those lows and pushing rates higher.”

Once again, no, no, and no. The bond market takes no cues from monetary policy except if it views that policy to be effective. Interest rates rise because of opportunity, not because the Fed attempts to command it with the federal funds rate as in 2016, 2004, or even 1994. There is no “hawkishness” or “dovishness” by itself, instead the interpretation of “hawkishness” if things are actually getting better or “dovishness” if they aren’t. This other convention where the Fed is at the center of everything just doesn’t wash. 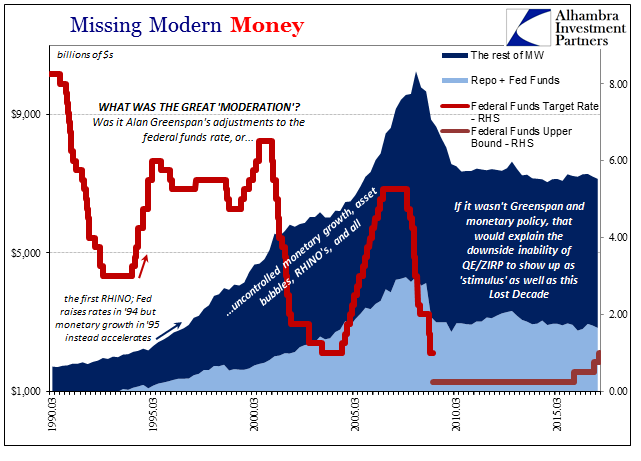 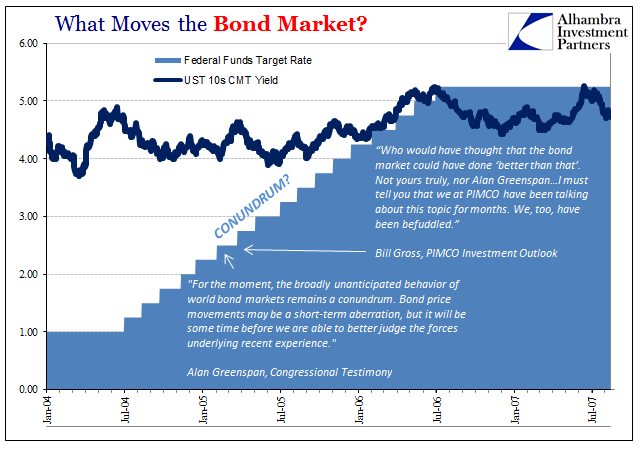 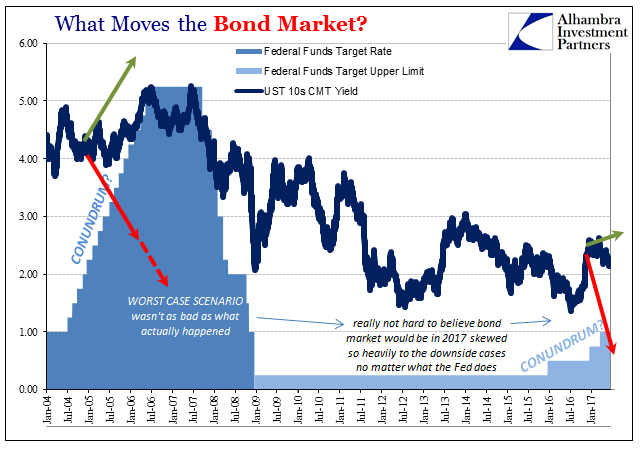 It presupposes infallibility which has been proven not to exist. Presumably the Fed’s “hawkishness” derives from its proficiency in economic interpretation. Therefore, bond rates would rise not based on monetary policy action per se, but rather agreeing with the Fed’s interpretation of what “hawkishness” means as far as economic opportunity. To claim that the bond market must follow monetary policy is to simultaneously claim that the FOMC is always right; and further that bonds must always defer in that judgment to these economists.

The bond market does not do this, though it does take into consideration central bank judgment as part of its stream of information. Before the summer of 2011, the bond market largely agreed with FOMC assessments. By and large, though, ever since 2011 the bond market which is always free to disagree with them about the economy or even the state of monetary function has exercised that freedom and in convincing fashion. From 2013 forward, nominal rates should have risen and curves steepened as economists and policymakers declared QE3 a resounding success, with particular emphasis on the unemployment rate. The bond market was correct, not economists.

And oil prices factor to a much higher degree than Janet Yellen for these reasons. It is oil that moves the CPI (or PCE Deflator) which is a very negative commentary on the economy tomorrow as well as today. Unless oil prices really break higher, then the bond market gives far more weight to what the FOMC members would all rather never consider – the problem really is money and economy rather than drugs and demographics.