The Two Parts of Bubbles

The Two Parts of Bubbles

What makes a stock bubble is really two parts. Most people might think those two parts are money and mania, but actually money supply plays no direct role. Perceptions about money do, even if mistaken as to what really takes place monetarily from time to time. In fact, for a bubble that would make sense; people are betting in stocks on one monetary view that isn’t real, and therefore prices don’t match what’s really going on.

These opinions during an asset bubble become rationalizations, which is the first part required for one. The second part is what investors are rationalizing, that the underlying fundamental conditions have nowhere to go but up. It becomes hard coded in trading regimens that whatever it is today can only be an order of magnitude better tomorrow; thus, buy today before you miss the can’t miss.

The dot-com bubble was exactly that. According to several measures of profitability, including those provided by the Bureau of Economic Statistics as part of their GDP (really GDI) data set, it was a true bubble in that sense. The BEA estimates the corporate profits hit their maximum in late 1997. Prices rose, often insanely, while underneath there was no confirmation for them.

It didn’t matter at least for a time because the economy is not the market, and the market is not the economy in the short and even intermediate terms. The big, general rationalization of that era was that earnings and profits would have to rise in the economic promise of the “new” internet/telecom economy as it replaced the brick and mortar old one. Whether self-delusion or honest mistake, the attempted “forward earnings” validation failed because earnings, meaning economy, didn’t ever follow the apparent logic.

There was no “new” economy, at least not in the United States (thanks to eurodollar expansion). 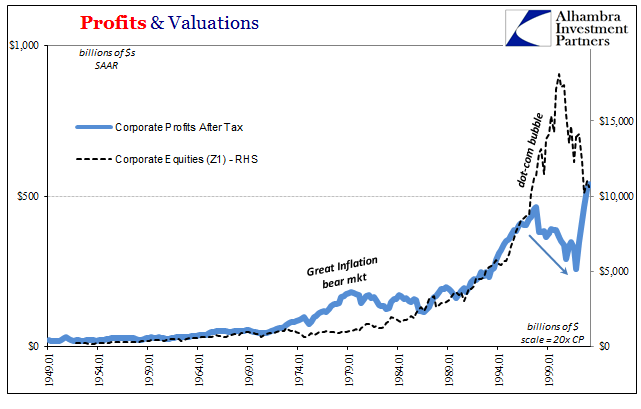 In terms of corporate profits, there was something of a recovery in them following the Great “Recession.” There would almost have to have been since the magnitude of layoffs was so immense. That was more a function of liquidity and cash flow than strictly earnings and profits, therefore it was, as in all prior monetary panics, overdone on the economy side (labor as well as capex).

The recovery in profits ended where the recovery(ish) period in the global economy did – 2012. Since then, profits have barely grown, experiencing at best a minor uptick or rebound in 2014. The “rising dollar”, however, ended that small gain. 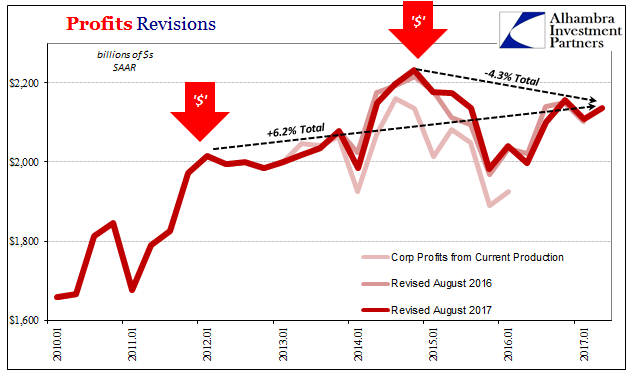 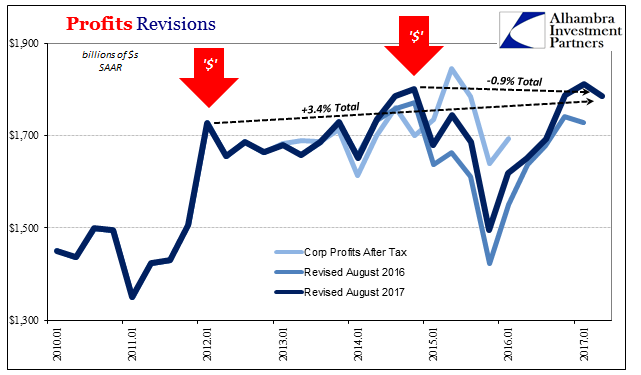 According to the latest BEA figures released today as part of the second GDP estimate for Q2, corporate profits have been unable to rebound from the downturn that resulted as a consequence of the restrictive (“dollar” shortage) monetary conditions of the “rising dollar.” After tax, corporate profits are still slightly less in Q2 2017 than in Q4 2014, and barely more (+3.4%) than in Q1 2012 five years ago.

Both the inflection in 2012 as well as the later one in 2014-16 related to illiquid monetary conditions, exactly the opposite of how money has been characterized under the QE’s. In the global economy as a result of these additional “dollar” difficulties, following the big one in 2008, economic growth weakened, never really recovered, then weakened again. More and more data from 2017 (including GDP) shows that true to the monetary pattern the economy is back again to never really recovered; including profits. 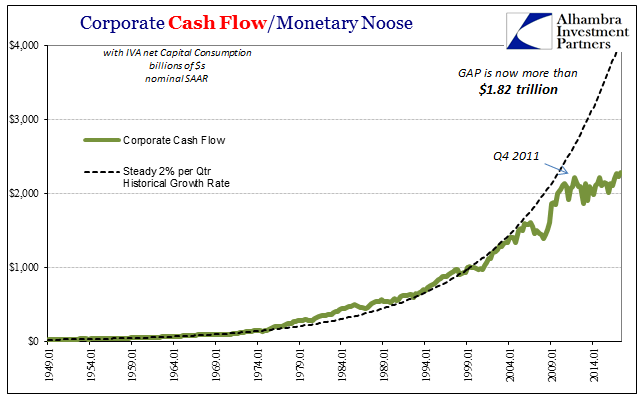 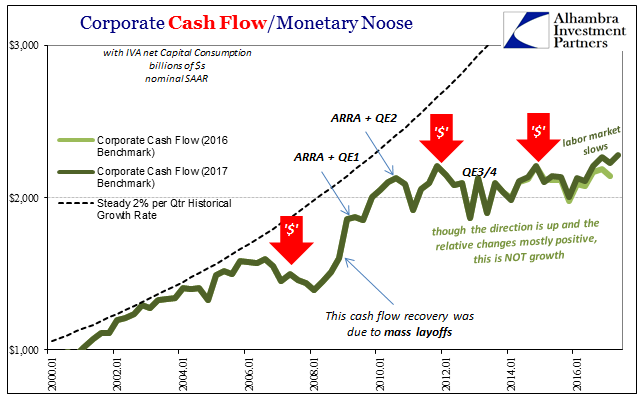 The reason for that is where profits, money (meaning liquidity preferences), and economy (revenue growth) all intersect. Corporate net cash flow rose (revised) in later 2016 not because of any economic upswing following the 2015-16 near recession, but instead as labor utilization was cut back. The only way in which cash flow to Corporate America seems able to grow is when those companies do what is worst for the economy. It has become almost a zero sum game. 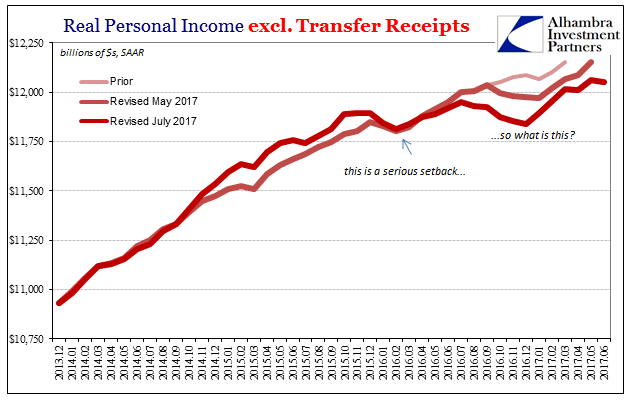 This is all contrary to what stock valuations are suggesting about future expectations. According to this conventional assessment, QE3 in particular (which was followed closely by a QE4 just to cement these kinds of perceptions) was a huge dose of money printing and therefore effective at fostering winning economic conditions. Stocks surged the year after it was introduced based on that monetary interpretation; profits over the four years since show conclusively it was another false one. 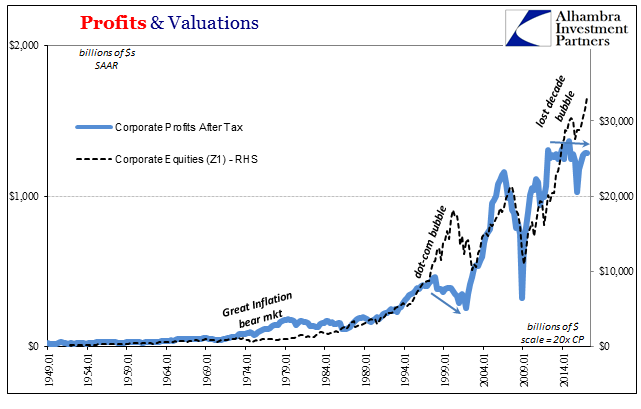 We have ended up in a similar circumstance as the late 1990’s. Earnings do one thing (over several years) while rationalizations about economic conditions lead in an entirely different direction. It is not yet to the same vulgar extreme as the dot-coms, but an extreme nonetheless. 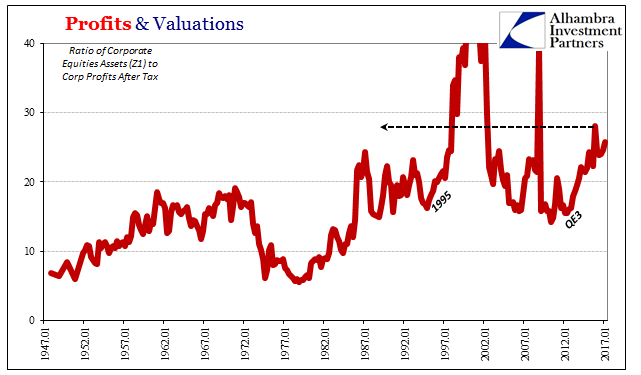 Stocks are historically expensive because they trade on still the QE3 assumption. Part of the rationalization for it is simple disbelief; it is hard and even impossible for some to imagine how the US and global economy might just stop growing and stay that way. If you think such a state an assault on logic and sense, then you might trade as if one lost decade is the absolute limit of stagnation and malaise. True growth must be just around the corner, so why wait?

An objective view of monetary conditions, however, easily disabuses such a notion. Not only can one lost decade become two, it is from the monetary realm that such possibilities become reality. 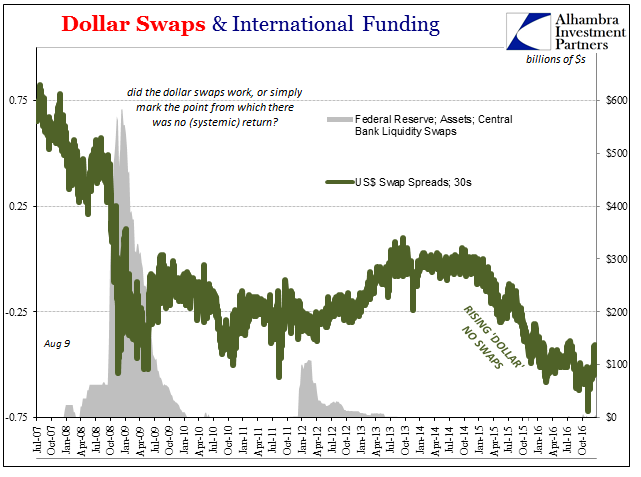 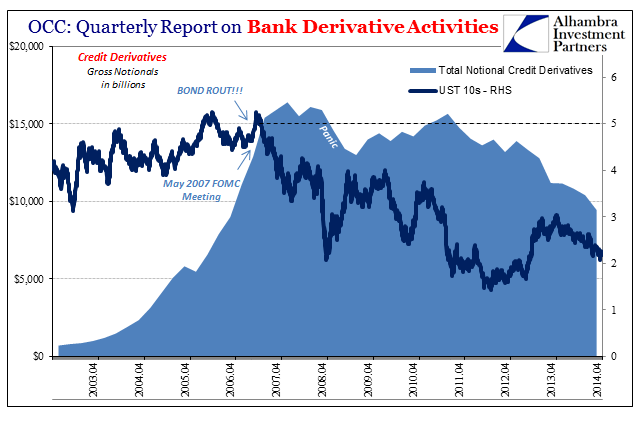 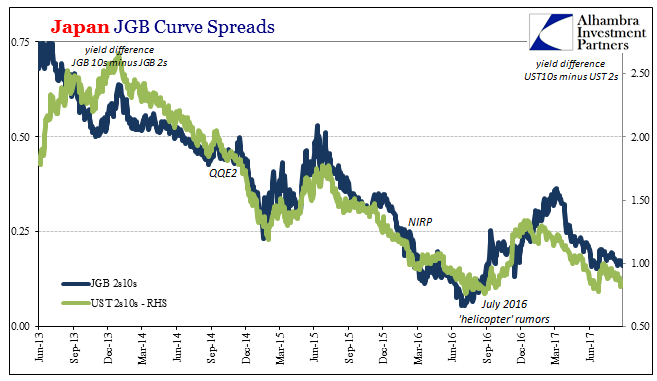 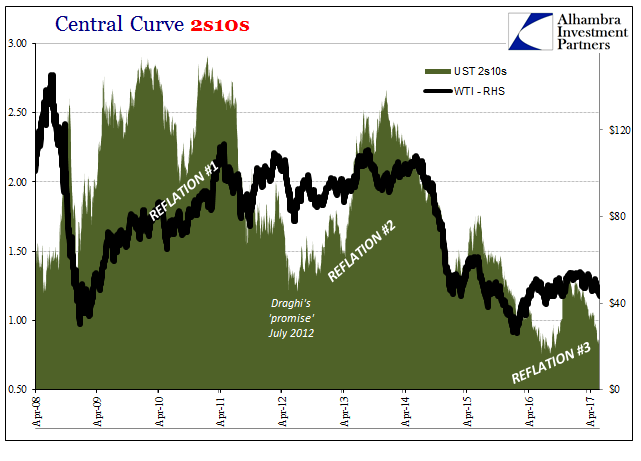 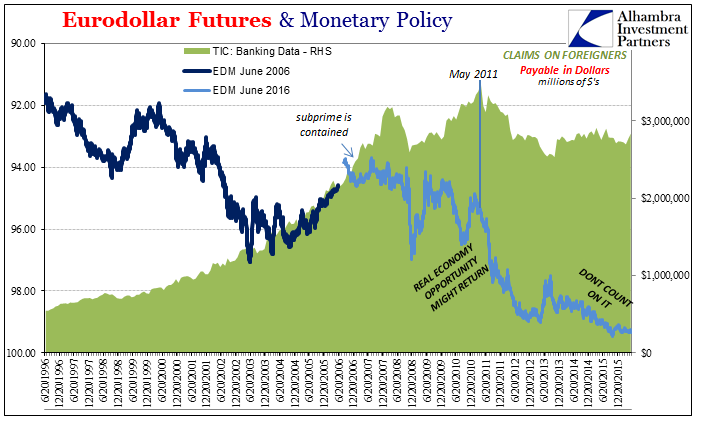 All the ingredients for a stock bubble are present. It’s not really a monetary bubble so much as an expectations bubble. Rationalizations about money have had the effect since 2012 of hardening the wrong ideas.

Everyone always wants to know when confronted by this data exactly when people will wake up from the hazy doses of self-deluded reality they have become emotionally attached to. There is no answer to that question as we can’t know when, nor exactly what it might be that draws open the curtains of disappointment (to put in mildly). All we can do is honestly analyze money, economy, and valuations and see them for the (heavy) risks that they represent. 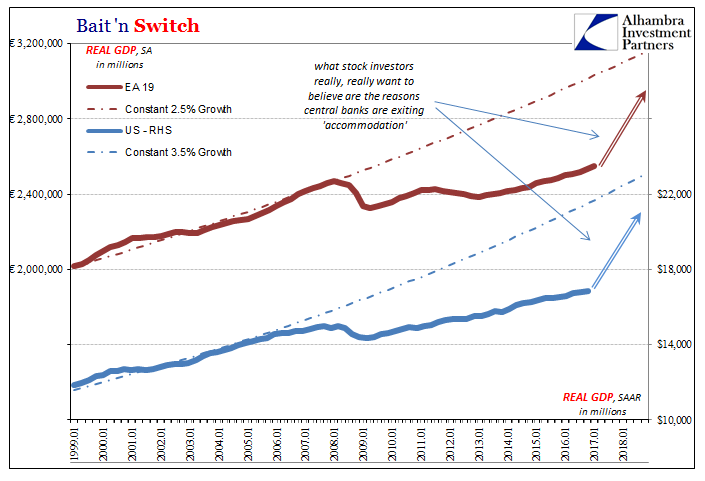 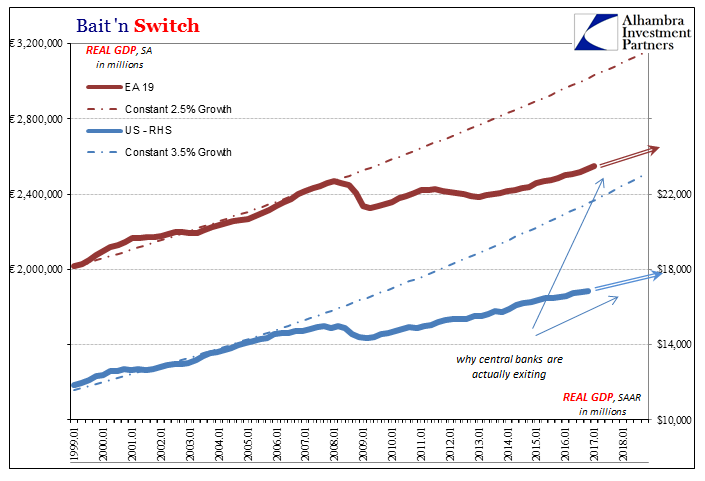