The Eurodollar Equation Begins With The Imagination Variable

The Eurodollar Equation Begins With The Imagination Variable

There wasn’t a whole lot that made sense about iron ore’s price surge through August. In the flipside of what is believed also to be moving copper, Chinese authorities have made it plain that they will take pollution control seriously this winter. For copper, that likely means shutting down mine production, tightening supplies, and could therefore be price positive, perhaps hugely so. For iron, that likely means shutting down steel production, collapsing demand, and could therefore be price negative, perhaps hugely so.

Yet, from late June until the first week in September, iron prices surged for reasons that aren’t apparent. The price often traded in correlation with copper, rather than an inverse one as you might expect.

That has continued through September, only now with both iron and copper in sharp reverse. It isn’t pollution, perhaps not even a fundamental price setting.

Iron ore prices are in retreat as the market starts to factor in realities that it has previously been happy to ignore in the euphoria of a strong rally.

As always when prices start to decline after a surge that appeared unrelated to supply-demand fundamentals, the question is will the reverse become a rout and where exactly does fair value lie?

If commodities have shifted in emphasis, of course it makes sense to address any fundamental concerns and whether price action makes sense (so far as you might be able to tell). But commodities are not strictly determined by physical quantities. They are often susceptible to monetary forces beyond. 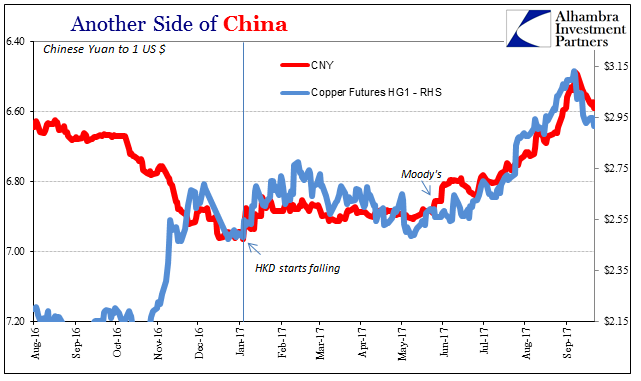 Copper more so than iron has found a correlation with CNY. Iron has reflected CNY’s enthusiasm in either direction; first up, now down. What makes all this more intriguing is CNY’s perfectly clear relationship with HKD; first down, now up. 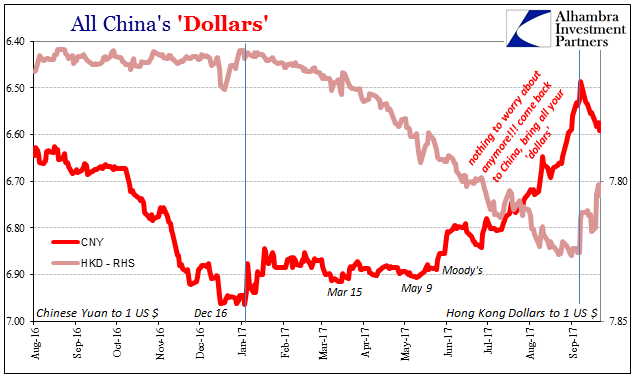 Not only that, the inflection for all these takes place during this: 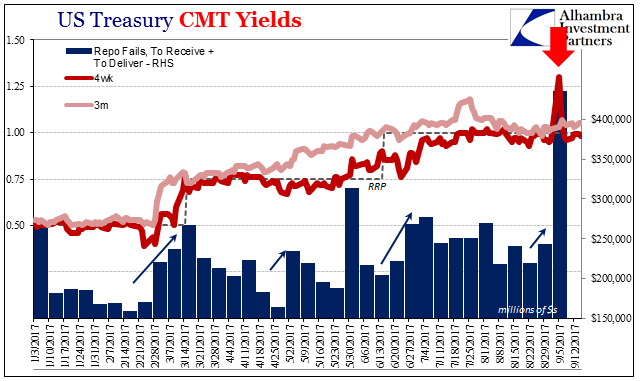 The significance of CNY in the middle is as discussed yesterday for how hollow and artificial the upward CNY leg really was:

The sharp rise in CNY against the dollar was immediately recognizable for what it was, artificial PBOC policy through whatever secondary channels.

The affected prices listed here appear to be those secondary, tertiary, or even quaternary channels. Buy iron with rising RMB, borrow HKD with iron, and sell HKD to buy dollars. Falling RMB means selling back the iron, closing out the HKD transactions (in whatever cash settlement means), and being forced to buy back dollars for CNY.

Any link in the chain could cause it to collapse backward, including sudden tightness in HKD funding (whether or not linked to a copper or iron collateral haircut). 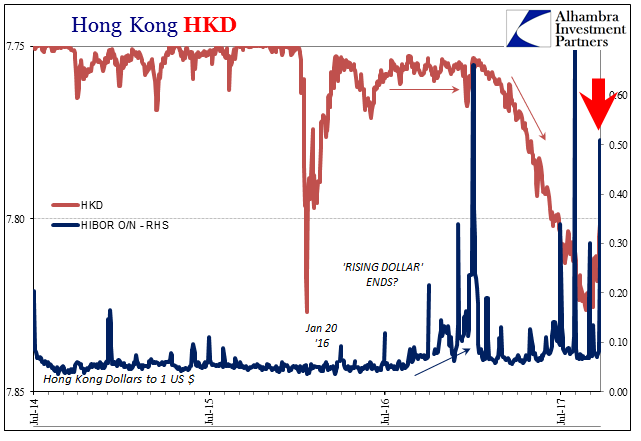 HIBOR rates (unsecured HKD) did jump on September 7, but it wasn’t anything huge. They have spiked more, a lot more, the last two days (as HKD was rising again).  But that follows the reversal instead of leading it; meaning that it wasn’t likely HKD tightness that caused the chain to go back on itself but was instead a downstream effect from it. In other words, something here is really off.

We could also guess and hypothesize a collateral swap of HKD iron/copper for US Treasury bills (for a spread) in Hong Kong so that whoever might be doing this (on whomever else’s behalf) is borrowing dollars in repo rather than buying dollars in FX (though there is no reason they might not have done both). If that did happen, what would repo problems especially with T-bills do to this liability chain working backward again?

My larger point is not to speculate (which is what that is in the two paragraphs immediately before, a fun exercise nonetheless) on exactly what is going on out there for we will likely never know. It is more subtle and general, ultimately more important; in the mainstream treatment of currencies, currency flow is treated as flows of currency. There is no currency here anywhere, only liabilities on some multiple of banks’ (at least two) computer screens.

The eurodollar system is non-reservable, meaning there aren’t pools of actual dollars that these liabilities will be converted into in these kinds of situations. It is instead convertible into whatever might be collateral that can then be in turn liquidated into the same type of thing (if maybe in a different denomination) as when it all started. It’s like a dog chasing its tail, or a computer program stuck in an infinite loop. There is no beginning nor end, no monetary pyramid upon which to rest whatever follows.

Because of this style of arrangement, “currency flows” are limited only by imagination. Or, as I alternately describe of it, what one bank may dream up that another bank will accept. On many occasions it sounds just this ridiculous, but often the truth is even stranger than we can figure even when we figure the fantastical. It’s why bank balance sheet capacity is the ultimate monetary force, because in the end the ability of any one or more counterparties to accept the imagined is dictated by what balance sheet math (especially volatility) determines as acceptable.