The erosion of social order in any historical or geographic context is gradual; until it isn’t. Germany has always followed a keen sense of this process, having experienced it to every possible extreme between the World Wars. Hyperinflationary collapse doesn’t happen overnight; it took three years for the Weimar mark to disintegrate, and then Weimar Germany.

Even Nazism wasn’t all it once. What was required was continued denial especially on the part of institutions and the so-called elite for that country to descend into (actual) fascism. In fact, that was the common theme throughout the interwar period, a gradual erosion of trust.

How it could ever spiral so far out of control is still not much cleared up almost a century later. And that is the most relevant lesson to be taken from the catastrophe. Like any engineered system, a building or an airplane, it takes not one glitch or mistake but a highly improbable series of them to bring about total systemic failure. To crash a jet, for example, requires overcoming a great many redundancies and self-corrections which is why they have become so rare. But that modernity comes with a price – arrogance.

Germany’s currency collapse in the early twenties is so often blamed on the Versailles Treaty and its foreign takeover of things like the Ruhr Valley, or the demand for war reparations in gold. These were important, of course, but more than that no matter how much worse it became the German people were always told the opposite, that it was instead getting better.

In other words, German monetary officials, particularly Reichsbank head Rudolf von Havenstein and Minister of Finance Karl Helfferich, denied that Germany had an inflation problem at all – right up until the end. Minister Helfferich declared that Germany had better gold coverage after the war than before it, despite that more than quadrupling of currency volume. One economics professor, Julius Wolf, wrote in 1922 that, “in proportion to the need, less money circulates in Germany now than before the war.” As much as the easy-to-see Versailles excuse played a part, there can be no doubt that beyond 1921 the German people themselves began to recognize that authorities had no idea what they were doing; worse, they came to see that even though policymakers were inept and incompetent, officials themselves would never admit as much and thus nothing would prevent Germany from its fate. That awakening meant an increase in danger that French occupation could never have unleashed on its own.

People will accept what is sympathetic even if it is disastrous. In political terms, that means they will ride out a storm even when the response to it is incompetence. What they cannot abide is that plus denial. It is an entirely different story when authorities see the same problem you do and bungle the solution in good faith than when authorities claim you are crazy for thinking there is any problem at all when there really is.

The issue is trust, and the last ten years have performed perhaps the opening act in disavowing it across an enormous expanse of the globe. It is a form of corruption, one that is far more devastating than any official who just outright steals from the national treasury. A politician who does that is understandable; one who declares that what is isn’t is an enigma who can only be solved, in the public mind, by increasingly radical means.

You can generally rely on the youth wing of Germany’s conservatives, even in difficult times. As the results of the first exit polls got released at 6 p.m. Sunday and flickered on a screen at the Christian Democratic Union’s (CDU) national headquarters in Berlin, the next generation of conservatives practiced the same kind of denial of reality that the chancellor would display only a short time later. The election result for the party is devastating — with only 33 percent of voters casting ballots for the CDU and its Bavarian sister party, the Christian Social Union (CSU), this is the second-worst election result in the conservatives’ history.

This is what I meant when on the fifth anniversary of Mario Draghi’s promise I declared it a failed one. The danger to the common currency wasn’t ever Target 2 imbalances or a full-on Greek default; it was always the possible consequences of elite denial of the practical economic deficits that created those potential scenarios.

His vow to do “whatever it takes” to defend the euro doesn’t, apparently, include a realistic assessment of the European situation. Like other central bankers around the world, he will declare successful conclusion to the ECB’s monetary program and an effective end to the economic disease of the last ten years. And it will be so far from reality. 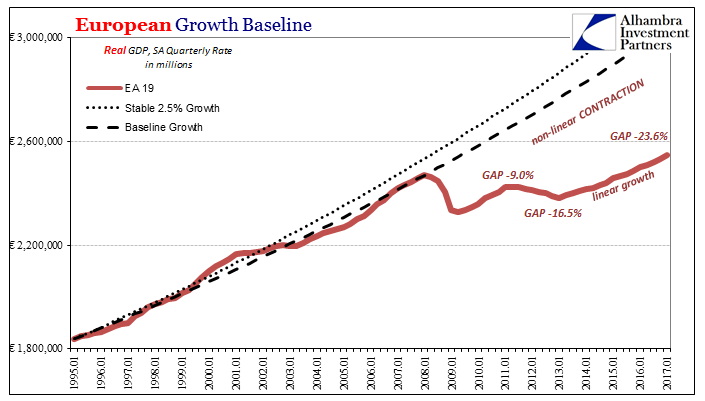 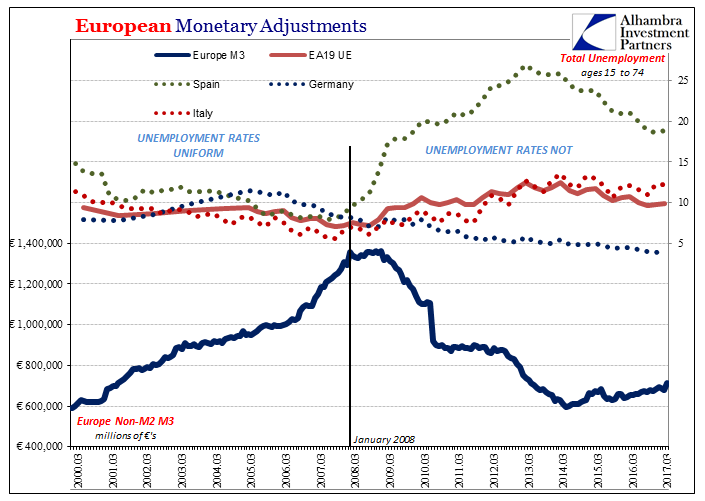 Europe’s economy is in no better state today than it was in 2009. It is, in fact, worse off today than at the official trough. The contraction has not ended, it has only become more misunderstood and complex.

It is that point which is driving political and social upheaval. In the US we have upwards of 15 or 16 million “missing” from the labor force scattered all throughout the country; in Europe they have the same kind of problem, only not scattered throughout the continent but concentrated in certain parts of it (Spain, for one).

Germany is not one of those parts, and yet political dissatisfaction is being delivered right at its doors. The media will say that is racism and xenophobia, after all Germany’s economy is booming, right? 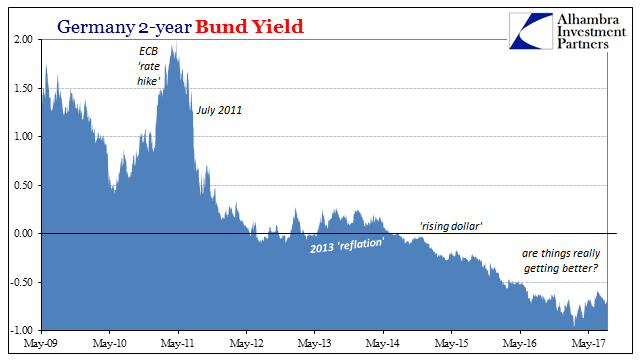 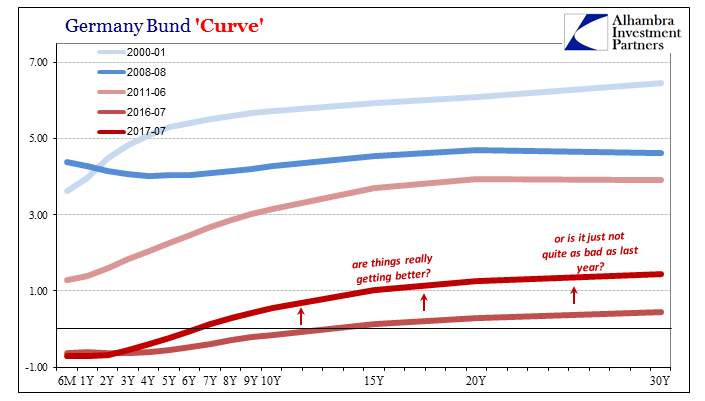 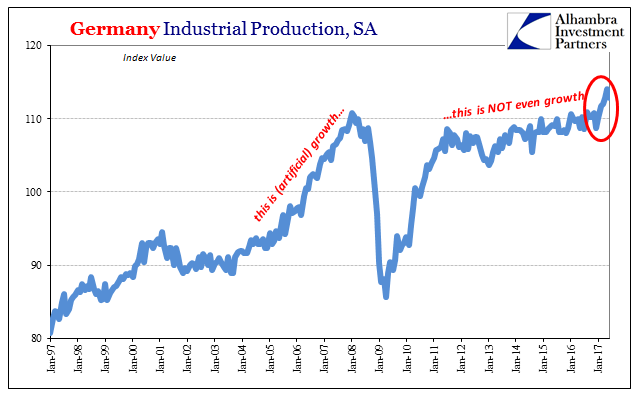 If you believe that then the global political situation will look today even more like madness, just as the Weimar Republic’s last years seemed to be. It was never insanity or irrationality but always, always denial; not from people like you or me, but the on the part of the people who are supposed to, and claim to, know better.

The antidote, one that needs to be delivered before it becomes too late, is nothing more than good faith. And with it will come electoral success, as well as many other kinds. The first legitimate political party to actually recognize (without falling back on CYA) the economy for what it is, and invoking the sinister, ridiculous wrath of Economists in the process, is the one that will set itself up for long-lived electoral success, a brand that could last a generation or more.

Political courage in these sorts of times, however, is something of an oxymoron.