At the end of Q3 2015, on September 29 that year, the overnight HIBOR (Hong Kong unsecured delivery of HKD) rate fixed at 0.0507%. That was barely changed from the days and even months leading up to that point even though it was the last of regular trading before the start of China’s Golden Week. Despite enormous illiquidity throughout the rest of China (RMB) and the world (“dollar”), Hong Kong was an island of stability and dependability during that time, holiday or not.

In fact, as it grew worse in China, HIBOR (HKD) rates had actually come down slightly as it all unfolded. What was suggested by all that was hoarding of liquidity across boundaries, and several of them (geographic as well as type). Hong Kong was the beneficiary because of its well-established reputation for low risk and high effectiveness (banking as well as the HKMA). 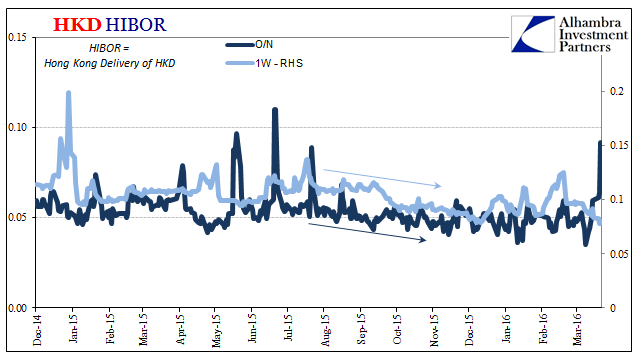 It was much different one year later at the open of 2016’s National Holiday Golden Week. The overnight rate surged to 0.217 % on September 30, 2016. It wasn’t isolated, either, as the shift in HIBOR matched a shift in SHIBOR (unsecured RMB in mainland China) leading up to the holiday celebrations. 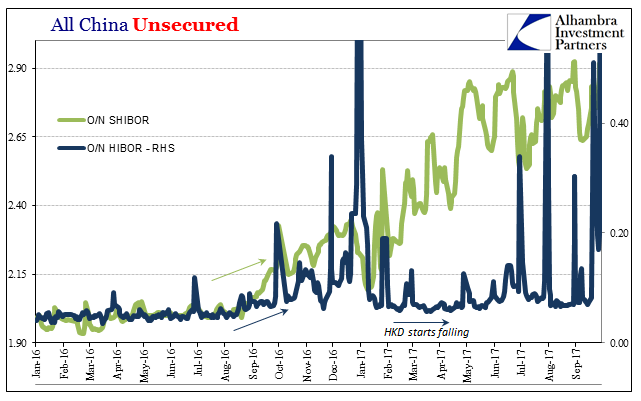 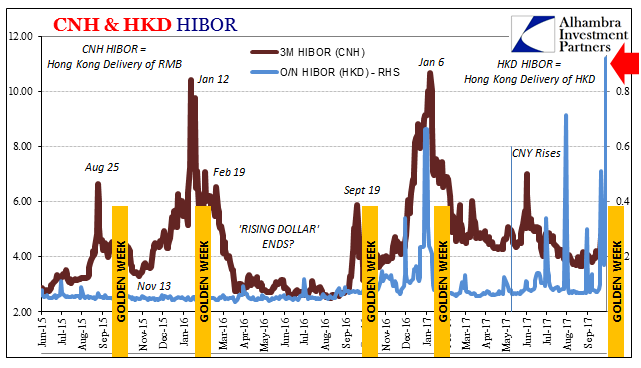 If Hong Kong CNH rates are stable in September 2017, Hong Kong HKD rates are not. The scales are not comparable, so the spike in HKD HIBOR (O/N) to 0.51018% last Thursday is equivalent in CNH HIBOR to something like 8% or 10% on the benchmark 3-month rate.

Exactly what is going here continues to be a hidden mystery, and most likely a tangled, convoluted one…Chinese authorities in a bid to disguise any further negative CNY tendencies have shifted them through unknown means onto Hong Kong – first offshore CNH (late 2015), then both CNH and HKD (late 2016), and now HKD more exclusively.

That last part is now fully confirmed with the end-of-quarter surge in HIBOR (HKD). It adds more evidence to what I wrote about earlier today, and the issues relating “dollars” to RMB, and therefore HKD (and then to who knows where else). In other words, someone is very likely “supplying dollars” (borrowing them in repo?) through Hong Kong as one way to help alleviate China’s broader “dollar” problem. Since that by definition hurts RMB liquidity given China’s monetary pyramid, it really wasn’t surprising to see the PBOC announce an RRR cut for next year. 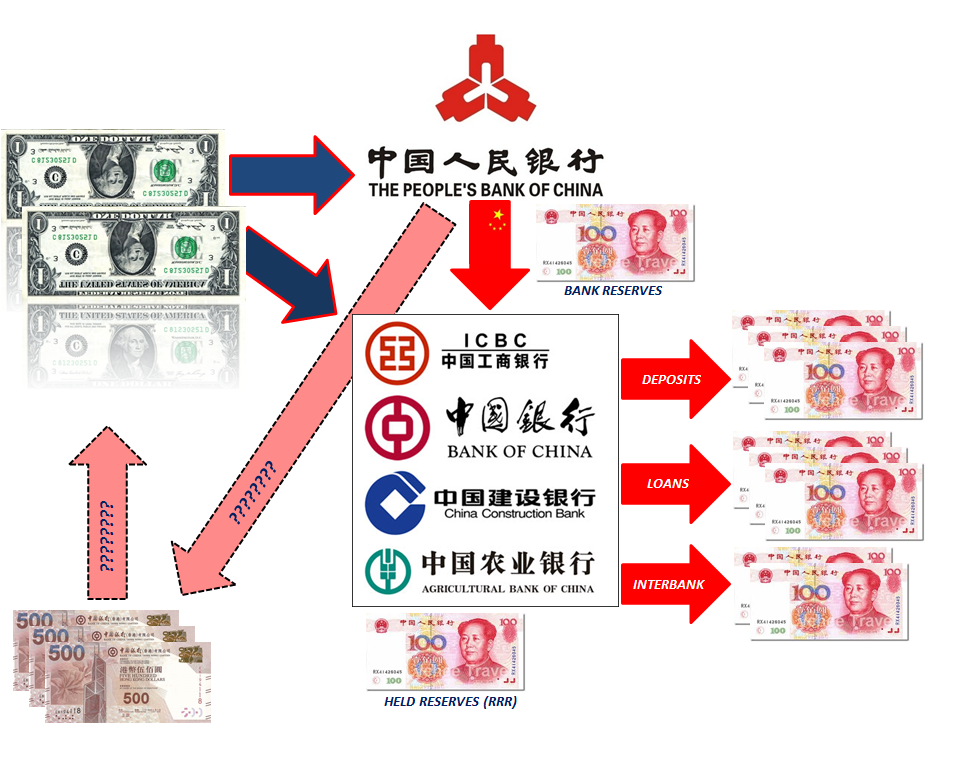 These would together cover to some degree China’s banks on both ends, “dollars” as well as RMB. What about HKD? It appears to be (part of) the cost of doing all this, one that Chinese authorities might be counting on Hong Kong’s sterling reputation to more easily absorb (at least relative to the shakiness of CNY’s). Those costs are not only one-time, however. Unless this works, they will be added to the bill coming due at the worst possible moment (in other words, just like all the previous attempts).

One other observation that applies is one I made before looking at this mess from afar.  This is not money, at least not in how it is thought about in conventional or popular terms. These are merely traded bank liabilities, numbers on some computer screen where the limitations are only what one bank might dream up, even a central bank, that another will accept.

My larger point is not to speculate…on exactly what is going on out there for we will likely never know. It is more subtle and general, ultimately more important; in the mainstream treatment of currencies, currency flow is treated as flows of currency. There is no currency here anywhere, only liabilities on some multiple of banks’ (at least two) computer screens.

The eurodollar system is non-reservable, meaning there aren’t pools of actual dollars that these liabilities will be converted into in these kinds of situations. It is instead convertible into whatever might be collateral that can then be in turn liquidated into the same type of thing (if maybe in a different denomination) as when it all started. It’s like a dog chasing its tail, or a computer program stuck in an infinite loop. There is no beginning nor end, no monetary pyramid upon which to rest whatever follows.

These are not the floating currencies that Milton Friedman hypothesized as an improvement upon gold exchange (calling into doubt the idea of floating currencies in the first place). They can’t be because, again, there is no currency let alone money.  It’s all just bank liabilities and imagination.  If you can get the next bank to consent to receive what you just dreamed up (the structure of future cash flows, as in FX), then it works.  Monetary policy is therefore convincing the next bank in the chain to do just that, through whatever means might be available.

It doesn’t always work; or even very much.