It’s Not Easy To See

It’s Not Easy To See

There are supposedly jobs that Americans won’t do, and now there are, apparently, jobs that British won’t do. In the latter case, according to the UK’s Minister of State and Commonwealth, Sir Alan Duncan, it is the Europeans who were blamed for taking work from native English. The result was, in his view, Brexit. Duncan called it a “tantrum” last week.

You could feel in the last 10 days of the campaign, traditional blue-collar urban Labour opinion going viral for leave. They were stirred up by an image of immigration, which made them angry and throw a bit of a tantrum. That was part of the chemistry that explains the result.

There is very little sympathy for the plight of workers pretty much anywhere, but especially in the US and Europe. Economists have convinced the so-called elite political class that each economy is working and therefore it is the workers within them who are themselves the cause of growing, deepening disaffection.

In the United States, the Associated Press and the University of Chicago polled Americans last month and found once more rising negativity. Just 24% surveyed thought the country was headed on the right track. That was down from 34% in June, and as much as 37% in March when tax cuts, walls, and general political difference was the incoming administration’s order.

Many will see the latter result as an issue specifically of President Trump, but this goes so much further back in time. If people are turning on the President, it’s because he hasn’t come close to living up to his promises. People are angry because they have reason to be, though that reason runs counter to the mainstream narrative being set by Economists.

From a political or “elite” standpoint, this disconnect is somewhat understandable if entirely unsympathetic. It’s not just that Economists claim there is little or nothing wrong with the economy, even those who otherwise relate to the struggle of workers fail to identify and explain the reason for that struggle.

To get closer to the truth, we have to run in a direction that seems entirely backward, or at least wholly inappropriate upon first issue. It is exceedingly difficult to believe in the cause of the problem when that is, among many similar things, Deutsche Bank not making enough money.

It sounds utterly preposterous, but consider the global bank’s ongoing problems (the key being, as workers, ongoing).

Fitch Ratings last month cut the bank’s long-term credit grade one level, saying it will take longer to revive growth. That came a week after Autonomous Research LLP said Deutsche Bank may be “beyond repair” unless there’s a “miracle” boom at its once-mighty bond-trading business.

DB CEO John Cryan approved yet another turnaround plan for the bank a mere seven months ago. In it, he pledged to resurrect actual revenue growth perhaps this year. Instead, in the two quarters since that sort of pledge the bank has done the opposite of growth, particularly in FICC. The latest projections from Deutsche show the current quarter to be at best no better than the last two, and at worst at risk of being worse.

Several of the bank’s largest shareholders are losing patience so soon in the process – because this isn’t the first turnaround plan designed and implemented. There have been quite a few, none really worth remembering that with enough repetition has become almost self-defeating. They don’t ever work, as if the bank is broken or “beyond repair.”

The issue is, as Fitch highlights, the “bond-trading business.” The term itself only clouds the global economic issue further; workers all over the world are being screwed because banks like DB can’t make enough money in bonds? Forget that. It sounds so ridiculous that even sympathetic politicians aren’t going be able to make that connection.

But in a very general sense, yes, that is the problem. “Bond trading” isn’t really about trading bonds, as within that class is carried all the global monetary eurodollar stuff that is missing from the global economy. If we quite properly change the words “bond trading” to “money dealing” it becomes quite a bit clearer: 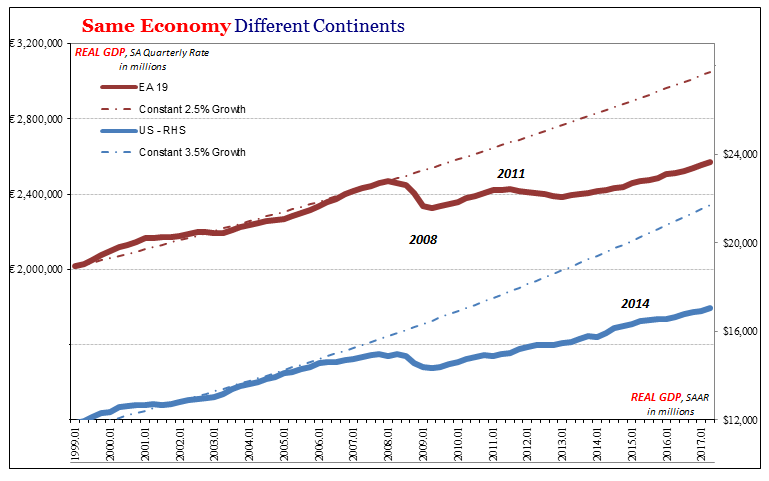 The primary issue isn’t that we might want Deutsche Bank to do so much better in money dealing, but that the system requires that to happen as it is still currently construed in order for that system to stop perpetually yanking the economy down with it. The whole thing failed (meaning no longer grows and functions in a stable fashion) in August 2007, but then has been left alone in that state this whole time. It’s a false dichotomy between wanting DB to do better or remaining stuck with the same perpetual economic misery. We can choose neither.

The real choice is between the current system that needs more profits for money dealers so that it can get more (eurodollar) money out of money dealers, and another system that isn’t dependent upon the unwise relationship of banks and money (credit-based money) in the first place. Until those and only those become the options available, the split between the working people of the world and the politicians who just want them to shut up and go away can only get worse. 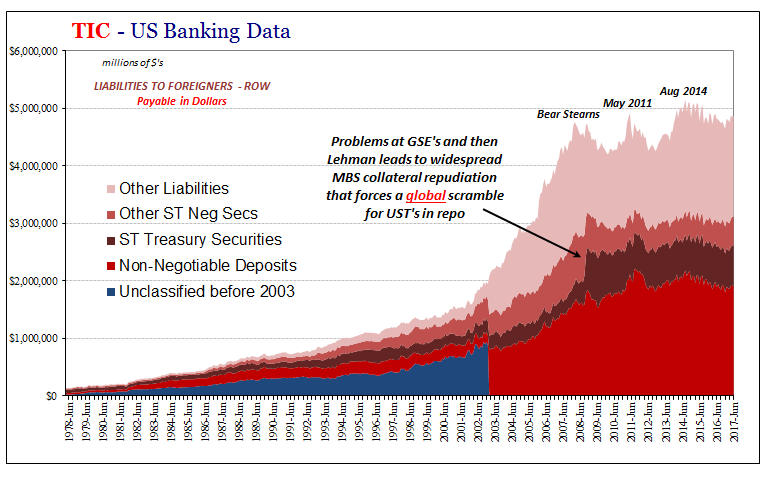