Strong Growth? Q3 GDP Only Shows How Weak 2017 Has Been

Strong Growth? Q3 GDP Only Shows How Weak 2017 Has Been

Baseball Hall of Famer Frank Robinson also had a long career as a manager after his playing days were done. He once said in that latter capacity that you have to have a short memory as a closer. Simple wisdom where it’s true, all that matters for that style of pitching is the very next out. You can forget about what just happened so as to give your full energy and concentration to the batter at the plate.

They also say in football (American football to our foreign readers) that one of the most sought after traits in a prospective cornerback is the same lack of recall. You are inevitably going to get beat one on one for a big play or touchdown, so all that matters is that you don’t let it bother you the next time you line up.

Selective memory works in sports because very often you don’t want the bad to start to affect the good, as can happen given that we are all human. The playing surfaces of whatever game leave no time for learning, that comes later after the final bell or whistle in the space before the next game.

It doesn’t really work so much in other disciplines where time is a much less impressive component. To ignore especially the big mistakes is making another one even bigger, compounding the problem in what can be a self-reinforcing cycle.

Economists and the editorial standards that dominate the media appear to have the shortest memory, and since they don’t play in professional sports leagues it hasn’t served them well at all. It was just three short years ago that everything we are experiencing now occurred then. The economy escaped a near recession experience (2012) and accelerated but to a suspiciously small, and uneven, degree.

Rather than pay any attention to those attributes, they instead focused exclusively upon the acceleration. Rationalizing their bias as 2014 being only an intermediate stage that would prevail eventually upon actual recovery, the vast majority could hardly contain themselves for how awesome it was surely going to be. What economists want more than anything, and the media too (all rooting for the technocracy), is to be right about recovery because it would vindicate their worldview and therefore their hold on political influence.

In many ways this repeat, again just three years later, is far less impressive than that one. In the middle of 2014, real GDP growth (Q/Q SAAR) reached 4.5% and 5.1% in consecutive quarters. That sounded remarkable only because GDP growth before then had been stuck so uninspiring for so long and right after the biggest contraction (2008-09) in seven decades.

None of those things added up; you expect after a large downturn a similarly large upturn, only this time there was none. Rationalizing that period again, economists let themselves believe the condition would be fixed merely by enough time (and QE). Six years seemed to them finally sufficient heading into 2015, with acceleration of any sort in 2014 all the evidence they needed for their recovery pronouncements.

Instead the economy has lurched between small upturns and near recession-like small downturns time and again; three complete “cycles” so far.

We find ourselves once more on a small upturn, though this one clearly smaller than the last. If 2014 proved so foolish to depend upon, what does that make 2017?

The U.S. economy expanded at a faster pace than forecast in the third quarter, indicating resilient demand from consumers and businesses even with the hit from hurricanes Harvey and Irma, Commerce Department data showed Friday.

The economic recovery since the 2007-2009 recession is now in its eighth year and showing little signs of fatigue. The economy is being powered by a tightening labor market, which has largely maintained a strong performance that started during former President Barack Obama’s first term.

You do have to wonder what it is these people are looking at, if they inhabit the same planet we do. They certainly aren’t seeing much apart from the plus signs, missing the key gradation that matters a whole lot as to what’s (increasingly) wrong with Planet Earth. It’s like 2014 never happened, or, more likely, as if 2015 did with only mild, transitory disappointment. 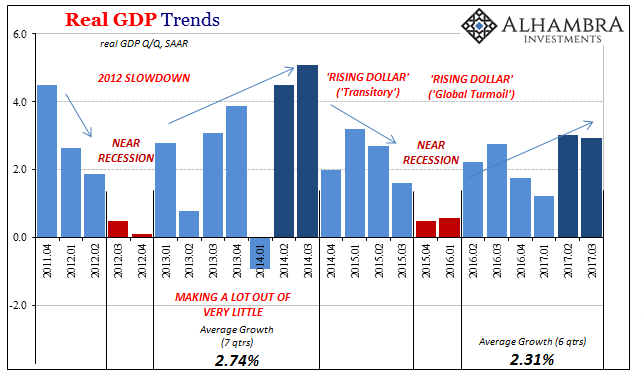 Three percent growth used to be a floor for the actually robust US economy of the more and more distant past. You can actually see very clearly how that was, but is no more. 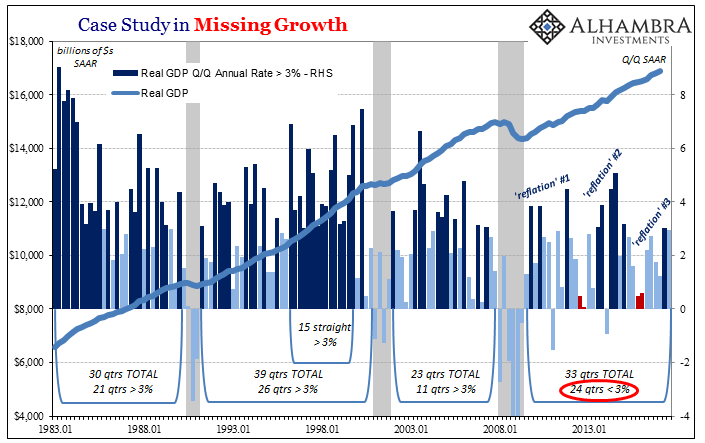 In the late nineties, real GDP expanded by more than 3% for fifteen consecutive quarters. That was growth, not just 3% GDP but clusters of more than 3% that lasted for more than just a few quarters here and there. Momentum matters a lot. Since the “rising dollar” really bit hard in the middle of 2015, real GDP has grown by better than 3% only once (Q2 2017; the advance estimate for Q3 is actually shy at 2.94516%).

As a result, the non-linear contraction only gets worse, the only thing that matters that has accelerated since 2014 (which accounts for much of the lack of economic momentum). 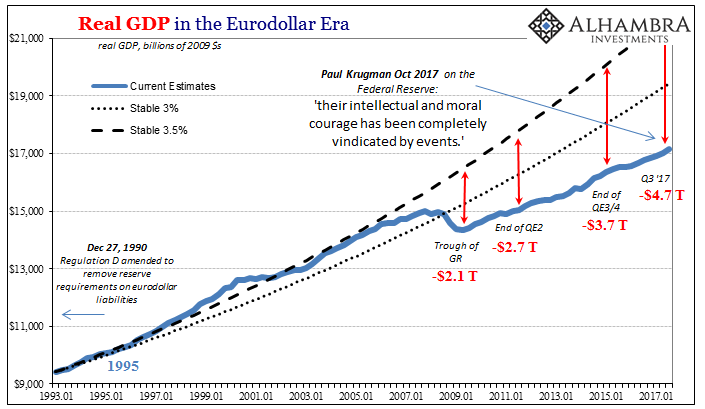 One of the factors holding back this upturn is inventory. Though growth in stocks contributed nearly three-quarters of a point to real GDP growth in Q3, that was more the exception from the past few years. In 2014 and really early 2015, businesses believed in consecutive 4.5% and 5.1% growth in anticipation of everything that economists and policymakers were talking about, all that was written in the mainstream as pre-ordained fact.

This time, one quarter at just above 3% and another just less than that isn’t nearly as convincing – not after the last three years unfolded into a downturn that economists still haven’t admitted happened (how bad, and irrelevant, does that first 25 bps “rate hike” in December 2015 look now?). 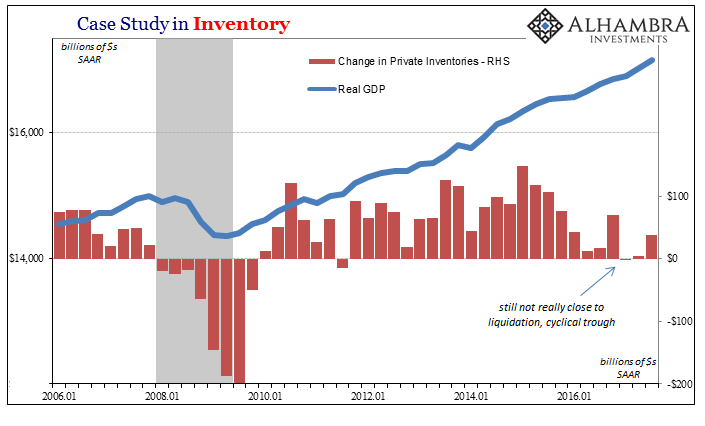 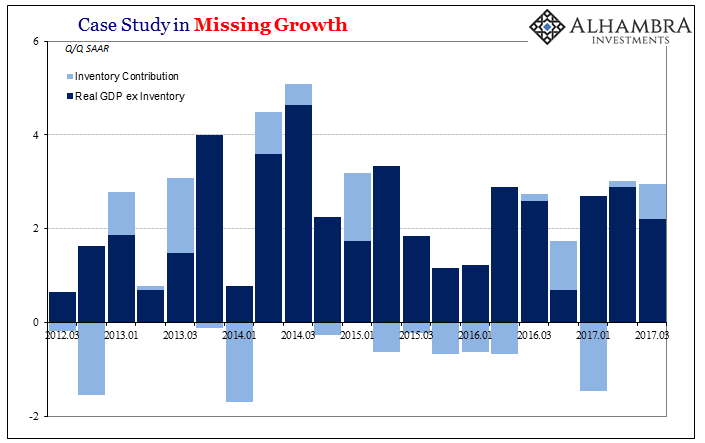 Inventory growth since that downturn has been modest and restrained, a measure of caution that is perhaps too optimistic still. Sales and overall demand haven’t really come back all that much despite now six quarters since that low point or trough. 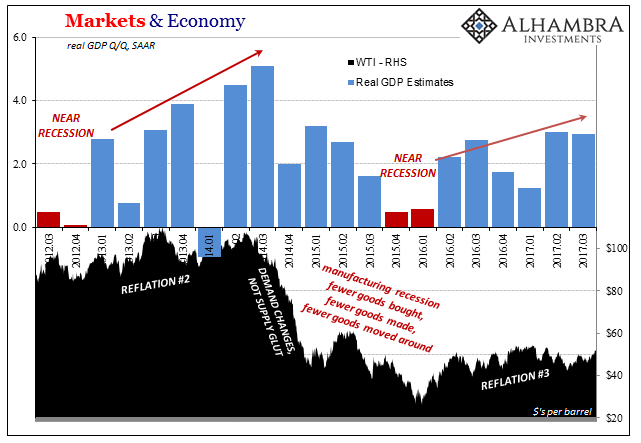 What the Q3 2017 advance GDP report confirms is what we already know, more evidence against using binary, traditional business cycle models. The economy remains stuck, dragged down overall the last decade by “something”, some great anchor that doesn’t allow even the most basic of cyclical impulses to get everything moving in the right direction with powerful momentum. Instead, it’s “expansion” continues to proceed unevenly, lurching between, again, slight downturns and slackening upturns.

This latest upturn is the slightest one yet, but it isn’t being talked about that way because Economics wants desperately to be right rather than correct. Having the shortest memory, the media continues to listen as if learning nothing from 2014-16. At the same time, the rest of the country and the world continues search for alternate explanations, or to just tune it all out. 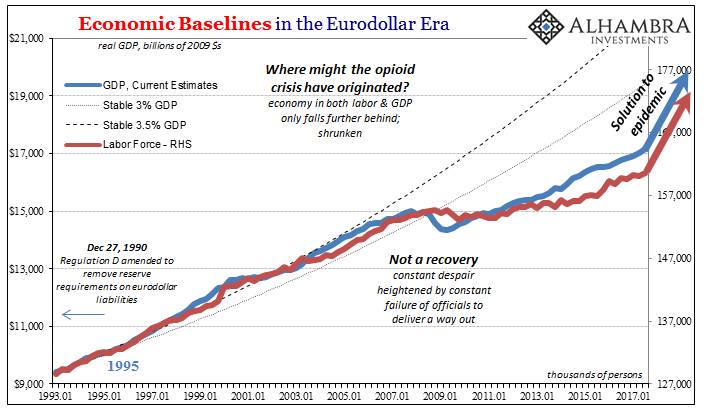