Historical Precedence For How A Bond ‘Bubble’ Ends

Historical Precedence For How A Bond ‘Bubble’ Ends

The UK government tried very hard to hold on. They had been able to raise $200 million from JP Morgan, a significant sum at that time under those circumstances. The British had also secured an almost equal amount from banks in France. The new National Government had produced a budget slashing spending by £70 million, while also raising taxes by £75 million. None of it was enough, the die long past cast.

The pound was under intense pressure in 1931, a result of the deepening depression. The Bank of England lost £56 million of its gold reserves in July ’31 alone defending sterling convertibility. By mid-September officials believed themselves out of options. On Saturday, September 19, the British government acted. Bank of England Governor Montagu Norman, on a steamer returning from the US, didn’t even know it had happened until he got back to Liverpool the following Wednesday.

Until His Majesty by Proclamation otherwise directs subsection 2 of section one of the Gold Standard Act of 1925 shall cease to have effect.

There were widespread effects as with most changes of this magnitude, including interest rates in the United States that jumped amidst deflation and depression. On October 16, 1931, the Federal Reserve voted to raise the Discount Rate by 200 bps, from 1.5% to 3.5%. American banks already crushed by illiquidity in the previous waves of bank runs liquidated US government paper to hold cash.

The long-term US Treasury bond rate that had fallen to around 3.15% in the middle of 1931, was suddenly headed back toward 4% and higher. The BOND ROUT!!! would last about five months, with the long-term yield peaking around 4.25% in January 1932. 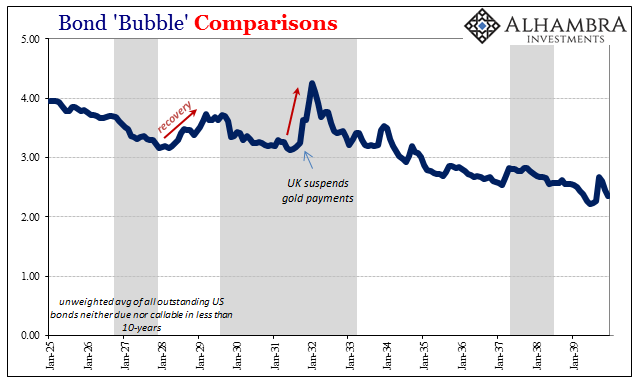 It would be the last of the great bond selloffs for some time. Treasury yields, even money rates, would remain low throughout the Great Depression. In times of stress and uncertainty, monetary as well as economic, liquidity preferences rule. 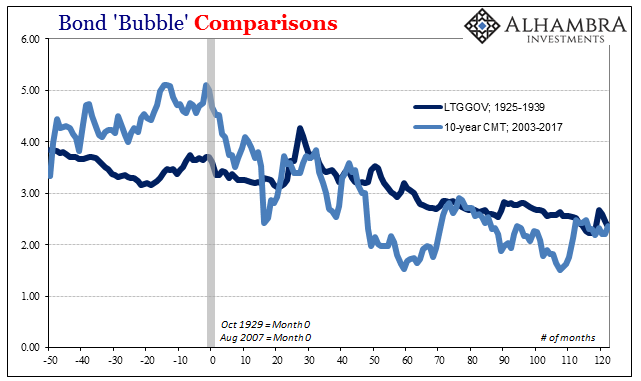 The bond market of the last fifteen years or so is on much the same trajectory, the behavior of the UST curve eerily similar. There is far more volatility to yields now compared to eight decades ago, a product of trading and financialization over that wide intervening period.

In the thirties, as today, many experts and economists called for higher yields to materialize rather quickly. They didn’t call it a bond bubble, but since the economy was recovering, or so they thought, such normalcy would mean the same thing in rates. But it would take 27+ years before the long rate (the ancient equivalent to the modern benchmark 10s) reached 4% again at the end of the fifties; it would be more than 23 years in between 3.5% yields at the long end. And when rates did start to rise, they did so gently, not all at once. There was no singular BOND ROUT!!! to pronounce the world had finally gone back right, the Great Depression finally at a merciful end.

If you understand why interest rates had only gone lower in the thirties you can easily understand why they didn’t just surge one day in the forties or even fifties. Yes, the Fed kept a ceiling on long rates from ’42 to ’51, but in all that time the central bank rarely had to intervene in the market; none at all over the final years. There was no artificially constrained bond bear lurking underneath. The Great Depression wasn’t just a single event, either. It was a series of shocks and paradigm shifts. During the collapse portion alone from 1929 to 1933 there were two or three “recoveries” (depending on your definition of the term), and then the great relapse in ’37. All the while, the entire monetary character of each economy caught up in it changed drastically.

Caution and paramount liquidity preferences were completely understandable as a natural reaction to not only what happened, but also what failed to happen. Mistrust of leaders and institutions was a full part of these trends, from the Fed to the UK gov’t officials (which had promised right up until September 18, 1931, to support the pound) to, of course, almost everything about Germany. The world had heard the song “things are getting better” and grew tired of listening. What became necessary was proof, things actually becoming better before the negative factors of the Great Depression would finally be cast off in real recovery – two lost decades later. Not even the end of WWII was sufficient for belief.

It was the steady and sustained growth of the fifties that finally put an end to the “bond bubble” of that age. Again, it didn’t happen all at once simply because financial participants had been burned before. They wanted to make sure that this new global economic prosperity looming just ahead of them was real this time, and not just some hackneyed economist or central banker’s promise.

When it proved to be an actual trend full of opportunity, only then did the great bond bear market take shape (eventually aided to a considerable degree by Economists screwing up yet again into the Great Inflation).

Many people may not find this historical comparison compelling, after all there seems little in common between now and the Great Depression. That’s true but only in a limited sense, largely at each’s front end. The size of the crash is really all that is incomparable.

A crash is a crash, both of them though of widely varying magnitudes provoking the same human instincts (caution, mistrust, liquidity preferences) all aided by the same mistakes (that there was a crash, declaring repeatedly for recovery, failing to account for uneven growth during that “recovery”). In just general terms, the bond market isn’t going to jump aboard the “growth” scenario without a good deal of hard evidence sustained over more than just a year or two, let alone a few months at a time here and there.

So long as that remains the case, and there is nothing at all going on right now to even hint that it’s not, then risks in the bond market are much lower than people think – certainly Economists who can’t seem to appreciate, or just don’t want to, their own huge role in the paradigm shift. 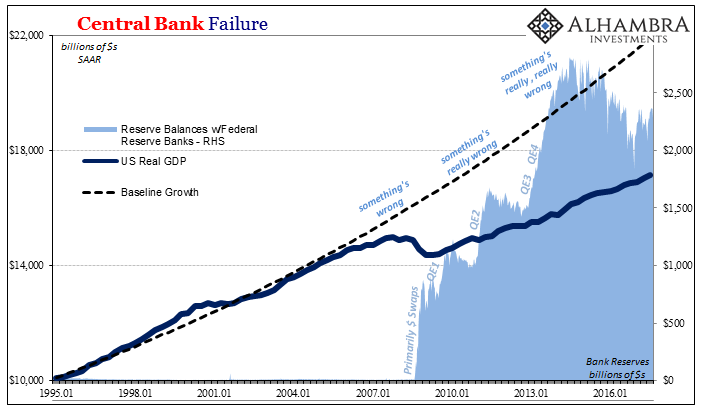 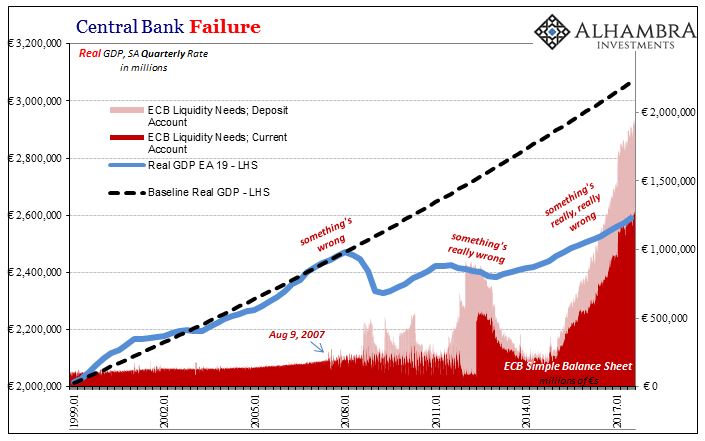