Industrial Production benefited from a hurricane rebound in October 2017, rising 2.9% above October 2016. That is the highest growth rate in nearly three years going back to January 2015. With IP lagging behind the rest of the manufacturing turnaround, this may be the best growth rate the sector will experience. Production overall was still contracting all the way to November 2016, providing the index favorable base comparisons that won’t last past next month. 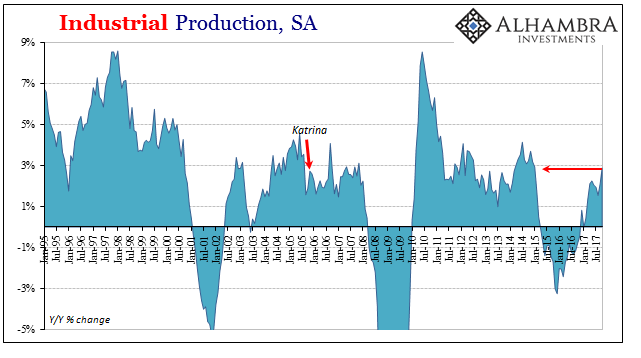 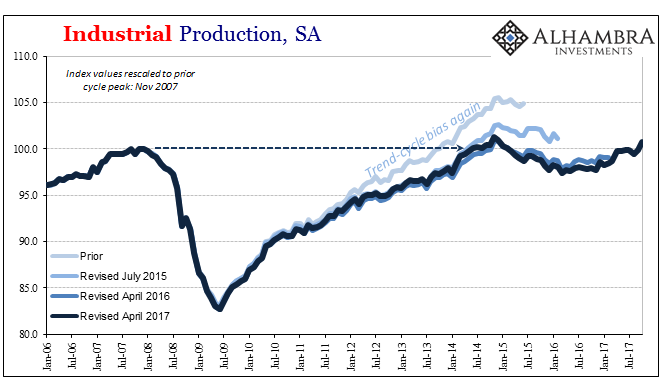 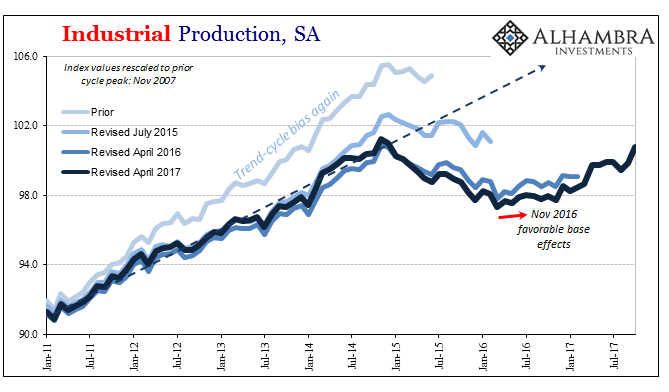 Industrial output is now again about even with the peak registered three years before in November 2014, and only slightly more than the one seven years before that in November 2007. In other words, had US industry not been interrupted by the “rising dollar” in 2014, as Economists assured the world it would not be, the industrial recovery still would have been far short of recovery in terms of both time and depth.

As it is with now a three year detour downward, the sector is that plus an additional lost three years of output. The gap is, of course, much larger than that given the clear lack of momentum in 2017 (tropical storms aside). In other words, as has become normal, even after suffering another serious economic blow US industry is in no hurry to get back to producing things. It’s never been this way before.

The Fed can’t figure out why there aren’t inflation pressures, so here is Exhibit #2 against the mainstream description for them even what might otherwise be called a good month. Exhibit #1 was the non-existent demand for goods which, unsurprisingly, leads to negligible growth in production. US industry corroborates Chinese industry in that very respect. 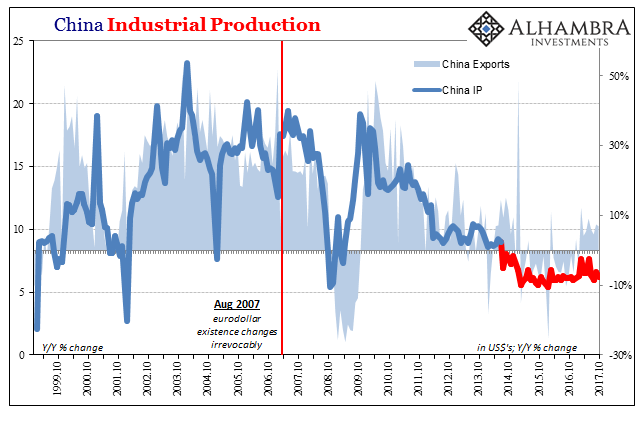 Apart from the oil sector which has of late become more volatile (only partially due to storm shutdowns and restarts), there isn’t a lot to carry US industry toward a more complete and compelling cyclical upturn. 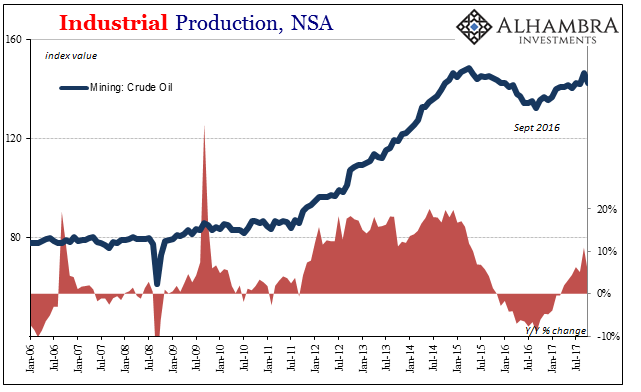 Despite a surge in automobile sales in both September and October as replacement vehicles are purchased in Texas and Florida, US-based auto production continues to be earnestly constrained. The BEA estimates that Total Vehicle sales were above 18 million (SAAR) again in October, down only a little from the 18.9 million rate in September, far better than the downward trend toward 16.5 million that was in effect up until Harvey’s entrance. 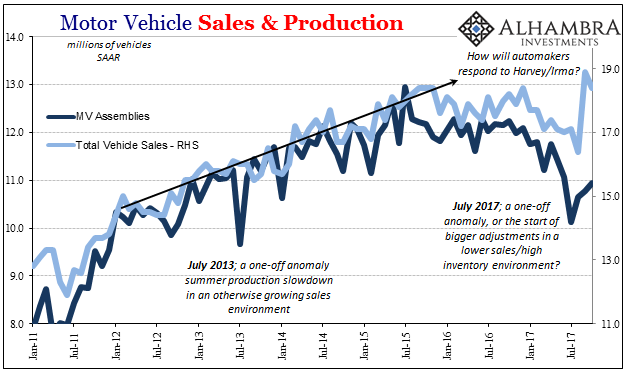 Motor Vehicle Assemblies in October remained under 11 million (SAAR) despite those higher sales. It suggests that automakers aren’t sure of the inventory problem after the hurricane boost fades. The destruction of so many vehicles certainly helped with the massive overhang at least in the short run, but it isn’t clear yet if it was enough to convince OEM’s to stop drastically curtailing production. 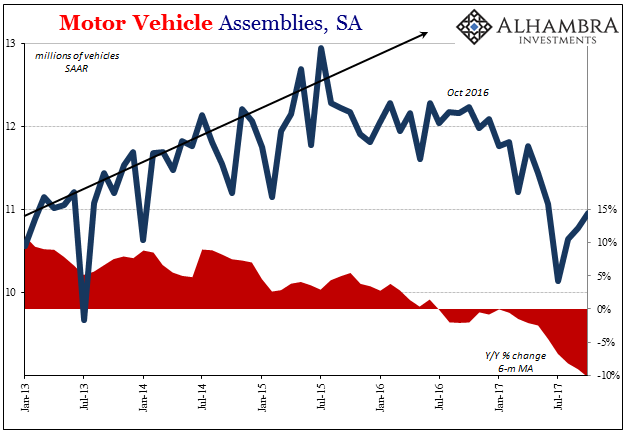 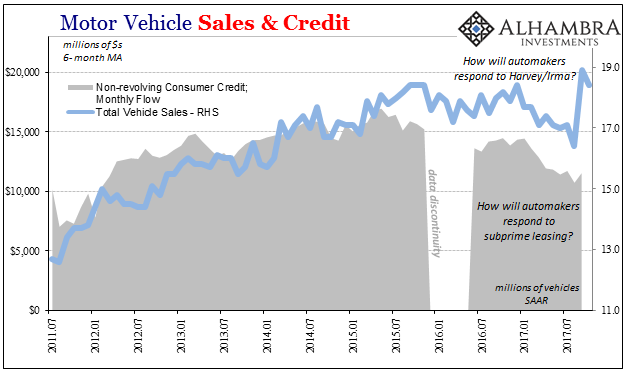 And there will be future concerns in the same places where the broken (car) windows are now a benefit, meaning that the temporary positive boost in destroyed vehicles will eventually be offset by a perhaps more-than-temporary drag once insurance premiums rise for a much higher proportion of car owners in the affected areas as insurance companies seek, as always, to spread out the costs of the storms to recoup as much of those losses as possible. 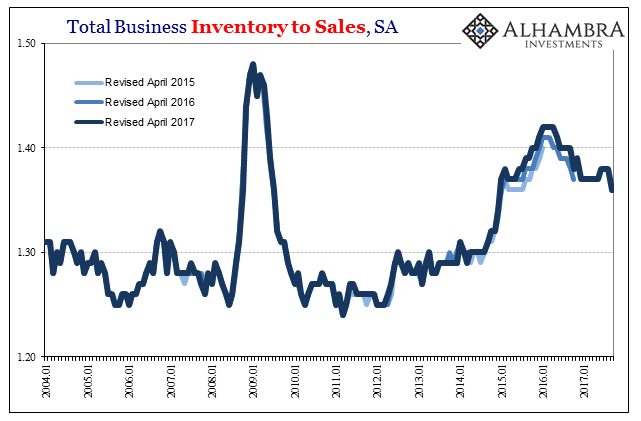 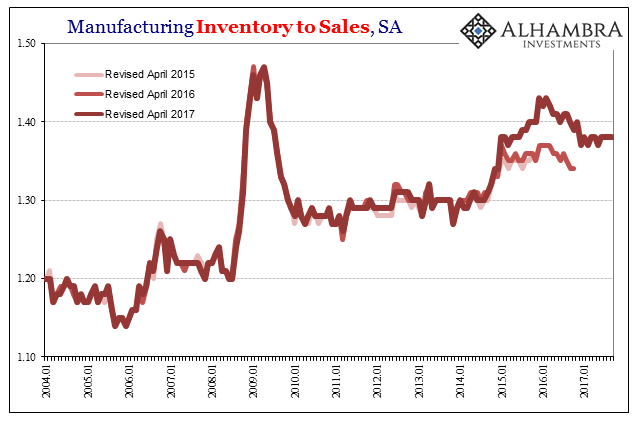 Inventory levels remain extremely elevated, especially at the manufacturing level (including the auto sector). There can’t (and won’t) be much of an acceleration for US industry until that imbalance clears out one way or the other. In a traditional business cycle that would surely mean rising demand to the level of robust, but, again, this isn’t a normal economy in almost every way.

With the view of manufacturing and industry provided by the Fed’s IP estimates picking up trends later by several months (they didn’t turn lower until December 2014, and didn’t start in “reflation” until December 2016), we may not yet be seeing in IP the full extent of 2017 weakness already showing up elsewhere. Demand for US goods at home and abroad slowed earlier this year, which hasn’t yet fully hit the IP numbers. With the background of inventory, the growth rate this month and next is likely as good as it gets for this piece of the upturn.

If that does turn out to be the case, it’s another Reflation #3 disappointment where 2017 doesn’t even match 2014. The economic disappointment about this year is by itself a big downside risk, let alone all the other stuff going on, too.