The Anti-Reflation Story Is The One That Mattered, And The Treasury Market Isn’t The Only One Telling It

The Anti-Reflation Story Is The One That Mattered, And The Treasury Market Isn’t The Only One Telling It

The Treasury market isn’t the only place where the idea of “globally synchronized growth” is proving a tough sell. The collapse of the yield curve suggests, in fact, it isn’t being bought one bit. Apart from bonds, US companies aren’t warming to the economic warming, either.

The labor market apart from the unemployment rate remains suspiciously subdued. According to the BLS’s Establishment Survey, the rate of hiring peaked in early 2015 coincident to the initial bout of the “rising dollar.” That monetary event then produced a significant (and global) economic downturn including a profit recession for Corporate America as well as small businesses everywhere.

It was right around that time labor market growth slowed that much more, including the shockingly weak payroll report for May 2016 (just +43k, not statistically different from zero or even negative). Companies squeezed by the effect of the downturn on revenue growth reacted as you would expect. They didn’t cut jobs as they might have in a serious recession, but they stopped hiring at the rate they once were (and then, apparently, forgot to send a memo to Janet Yellen apprising her of their clear economic shift). 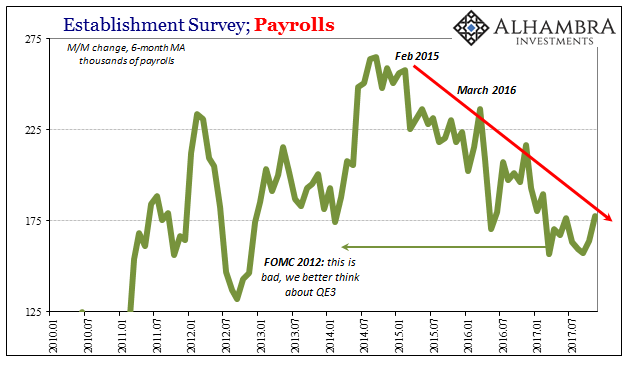 That wasn’t the only cutback in growth among business input costs, however. The Census Bureau’s estimates for construction spending now through November 2017 show that Non-residential Construction output is in contraction.

Overall, construction spending is growing very slowly, almost flat (+2.6% year-over-year). It would have been about zero in the latest month had Public Construction Spending not reversed sharply the past two months. That might have been delayed activity from several years now of steadily lower outlays, or it might have been related to storm cleanup and rebuilding in Texas and Florida. 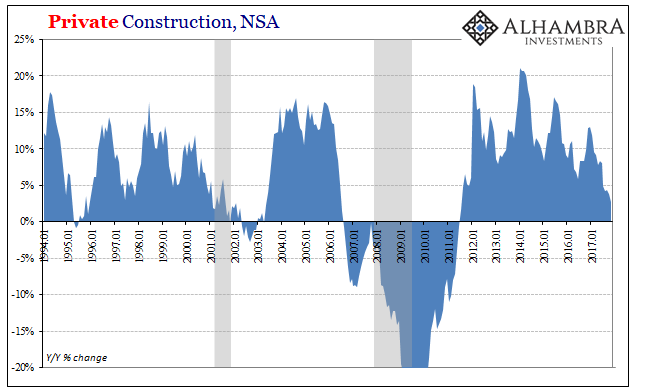 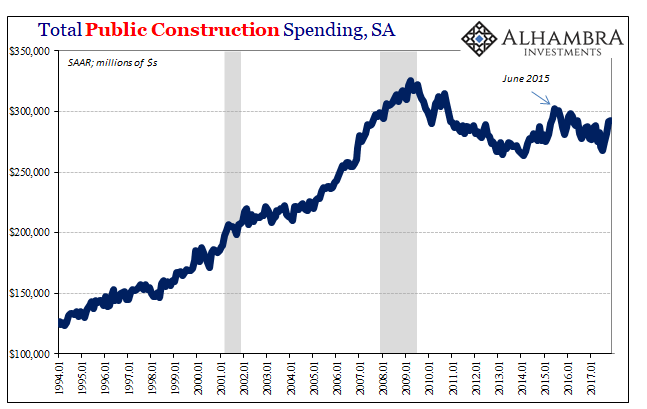 Either way, local governments continue to operate without a clear path to tax growth (more on that later). Despite “reflation” in the economy last year, there hasn’t really been all that much of it outside of sentiment.

That may be another reason why Non-residential Construction spending, the very economic baseline (capex) the economy really, really needs to pick up for everything else to finally pick up, has essentially hit a wall. Going back more than a year now, spending has been significantly lower. 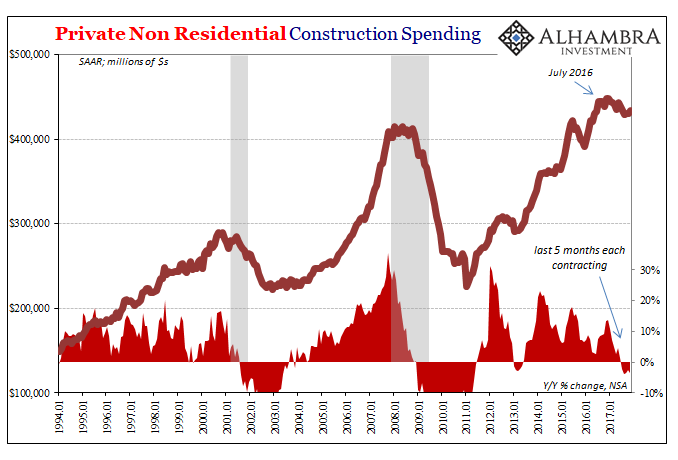 The timing of the shift seems very much in line with the further deceleration in job growth. The middle of 2016, while “reflation” in markets were just starting to take hold in certain market sentiments, appears to have led businesses to the opposite impulse in reassessing on a fundamental level business conditions.

What really matters about 2017 is that reassessment, labor and capex, remains in place. Despite all the rhetoric about “globally synchronized growth” and wage inflation, US businesses are, again, just not buying it. If they aren’t spending in capex, why on earth would they be in a rush to further increase their labor costs (wages)?

The whole mainstream narrative broke down last year, and it appears to have stayed that way the whole time through it. As I wrote yesterday:

That’s the real message from 2017, all the “should be’s” that never were. Last year wasn’t strictly as bad as 2015-16 and that downturn, of course, but in many ways it was worse. Last year confirmed a lot about where things stand, meaning that in the grand scheme of things nothing has changed. Last year was supposed to be the year everything did.

It doesn’t get anymore basic and fundamental than the view from the Treasury market, nor a similar view being carried out in terms of how US businesses manage their major cost items. It’s now two full years since the worst of that economic slide, a near-recession, and yet there remain a lot of lingering negatives that should have long ago disappeared if meaningful improvement was in any way possible.

It’s a pretty clear explanation for why “reflation” failed (again). While it was being bought in those markets, it never was where it truly mattered.