As expected, the Federal Reserve reported today that consumer credit expanded by an unusually large amount in November. Non-revolving debt rose by $16.6 billion, which is only slightly more than the recent average, and less than the average flow three years ago. It was instead revolving consumer credit where balances expanded the most (+$11.2 billion). As noted last week, that is in keeping with what appears to be renewed weakness in the labor market following a small uptick mid-year last year. 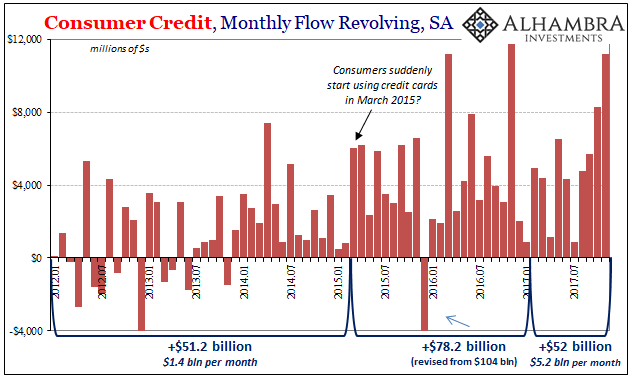 For November, it was one of the largest one-month gains for revolving credit going back to the Great “Recession.” While there has been some debate about what that means in trying to assess the overall economic conditions, and the health of consumers within them, I don’t believe there is much to argue about. The timing of this change (March 2015) as well as its rather obvious correlation with the labor slowdown strongly suggests consumers have at the margins exhausted all but their last option. It’s very different employment data than you would expect to find coupled to recovery-like risk-taking behavior. 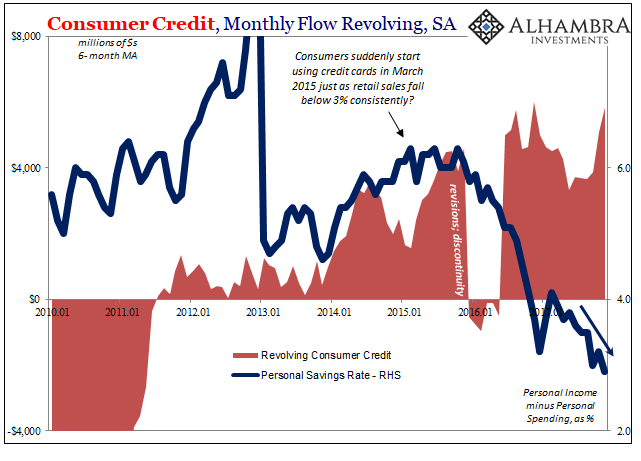 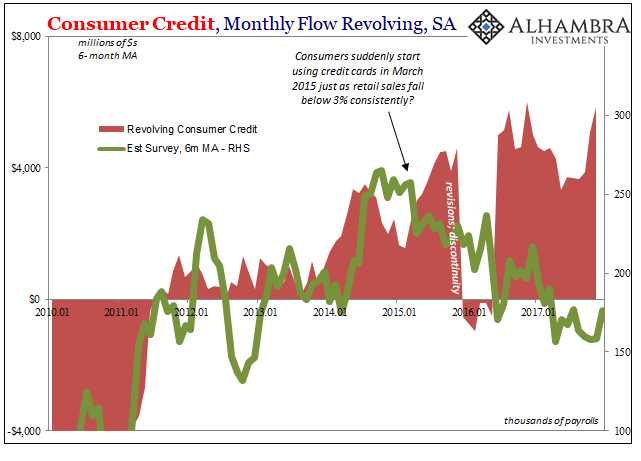 I would also add to that mix the differences in conduct from among the various classes of credit issuers. If we divide the consumer credit universe into the banking sector versus the non-banking sector, a clear and possibly relevant divergence emerges.

We do have to keep in mind that there are large discontinuities peppered throughout the Federal Reserve’s consumer credit data, so the direct comparisons made here should not be taken strictly at face value. There is, however, enough time given these results to make what are, I believe, reasonable though far from definitive inferences. 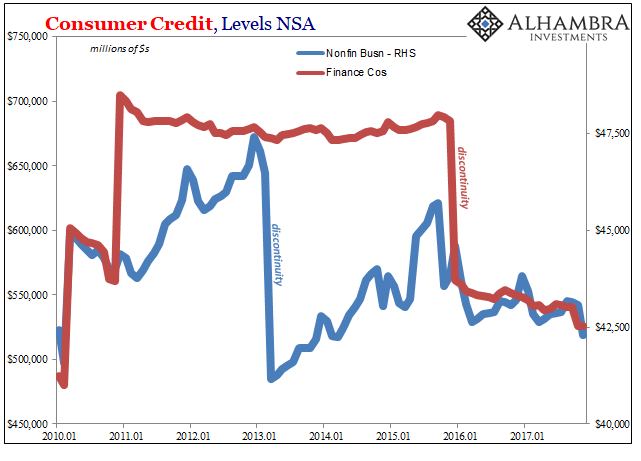 Non-bank issuers of consumer credit (both types, revolving as well as non-revolving) have been reducing their outstanding loans. The degree to which they have done so is impossible to estimate given the disruptions of data revisions, but regardless of them over the past several years these non-banks have been scaling back their consumer credit portfolios.

The banking sector, on the other hand, continues onward seemingly oblivious to all that has happened going back to 2014. 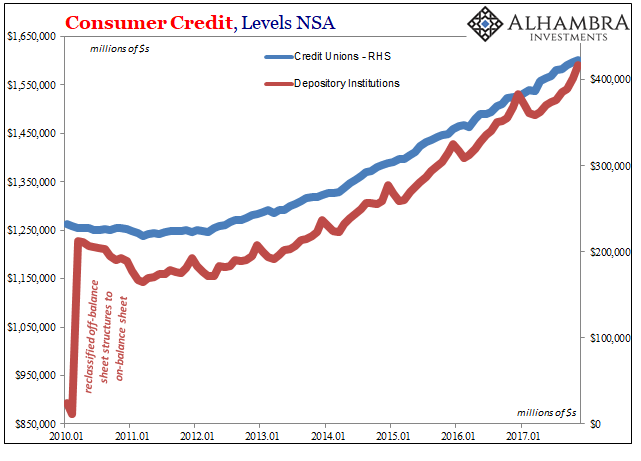 I hate to use the terms “smart money” and “dumb money” because in many ways they are both just different degrees of the latter (and it’s not so much “dumb” as it a hammer will always seek to pound nails), but for our general purposes here they can be helpful illuminating and highlighting this relatively clear divergence in outlook: 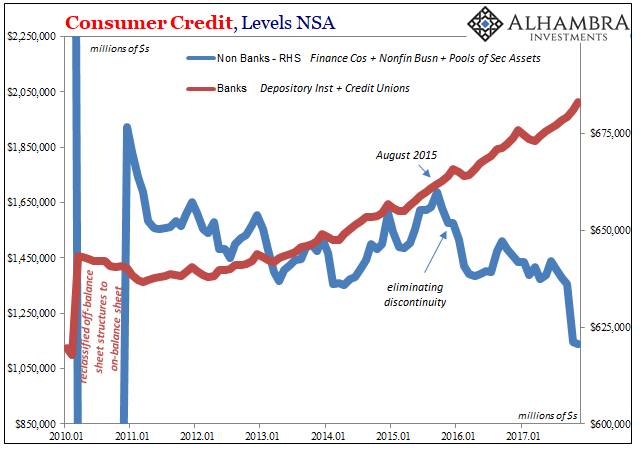 Using a back-of-the-envelope kind of reconstruction to eliminate the discontinuity that appeared for December 2015 and forward, there is an apparent distaste for consumer credit (again, both revolving and non-revolving) within the non-bank sector. More than that, the change appears after August 2015, which for anyone paying attention during that time is an obvious one.

The banking sector, by contrast, notes nothing of disturbance or concern. That would seem to suggest which one has been “smart” versus the other “dumb.” And there is precedence for which category qualifies as which label, one we have seen before at what was then a huge cyclical change: 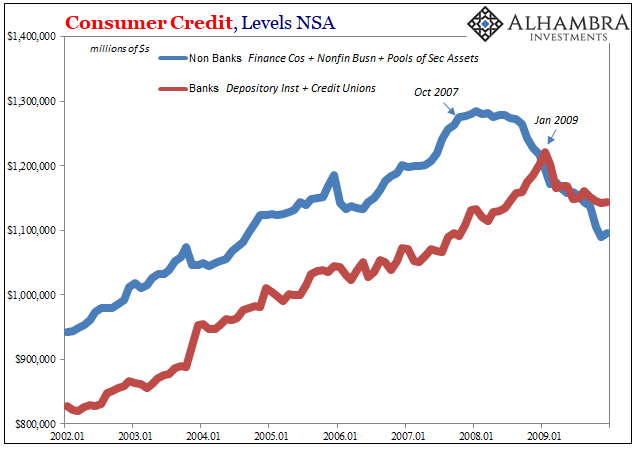 At the outset of the Great “Recession”, these non-bank conduits had already begun to re-evaluate and scale back their consumer credit profiles (some of which had to do with funding problems as much as conscious choices regarding consumer risks). The banking sectors, by contrast, continued to lend as if nothing was wrong right up until the worst in early 2009.

That would seem to validate more of a cyclical signal in the former than the latter, which if you’ve been aware of financial reality in the 21st century is not a surprise.

Again, I have to stress that these are tentative and limited conclusions – for as much as they might be conclusions. In terms of strictly consumer credit, the banking sectors in 2017 provides the vast majority of marginal credit when compared to the non-banking sectors, meaning that though the latter has been reluctant to lend the former has more than made up for it. Consumer credit is still growing and by a significant amount, as we only note some marginal caution in what could be a meaningful portion of issuers.

As always, there has been one other angle to the debt profile. The federal government has been by far the largest provider of consumer credit post-2008, taking over particularly student loan creation from the private sector. Even here, however, the rate of expansion continues to slow for outwardly non-economic reasons. 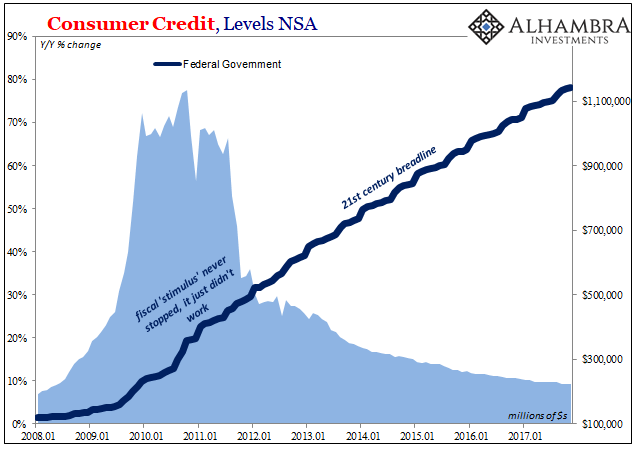 It doesn’t indicate anything particularly significant apart from the possibility that federal lending might be a smaller offset to whatever happens in these other places, or the whole economy for that matter, as we move forward in time.

Taken altogether, what I think all that adds up to is greater caution where it could really count – both on the part of consumers as they charge more and more to credit cards in lieu of both wage increases as well as broader more robust labor expansion, and perhaps more noteworthy the potential warning about consumer credit from the “smart money” non-bank sector. The latter not only follows closely the abrupt eruption of “global turmoil” during that global downturn, it also concurs with the labor market slowdown showing up at around the same time.