The Dea(r)th of Economic Momentum

The Dea(r)th of Economic Momentum

For the fourth quarter as a whole, Chinese exports rose by just less than 10% year-over-year. That’s the highest quarterly rate in more than three years, up from 6.3% and 6.0% in Q2 2017 and Q3, respectively. That acceleration is, predictably, being celebrated as a meaningful leap in global economic fortunes. Instead, it highlights China’s grand predicament, one that country just cannot seem to escape.

To begin with, 10% growth is not a robust rate. Far from it, that doesn’t even match 2014 or the years immediately before (Q1 2013, for example saw 18% export growth), let alone 2011 and the “miracle” precrisis years. For the three months of Q4 2017, total exports from China are still 1.2% less than they were in the same three months of 2014. That’s not growth, most especially that time dimension. 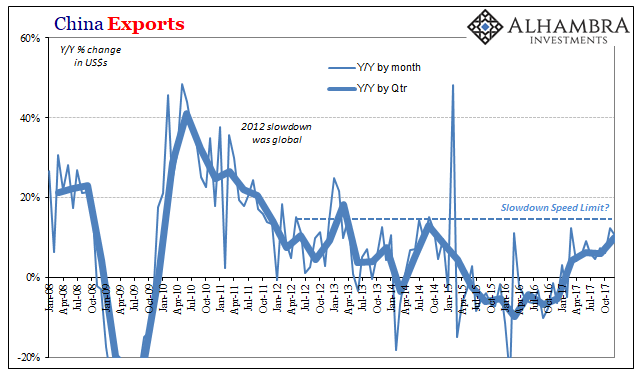 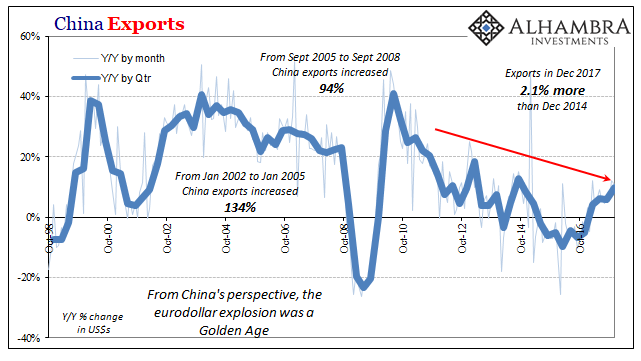 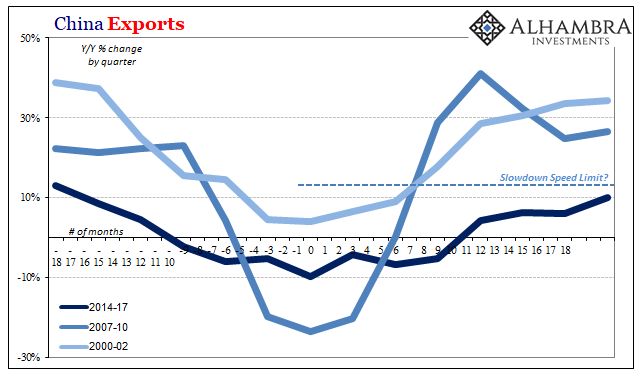 Of course, none of this is news. It’s been this way for several years now, which is really the point. Approaching two years since the trough in exports, that in many ways marked the overall low point for the “rising dollar” global downturn, these many months quite conspicuously are devoid of momentum.

Worse, there are growing indications that this may be as good as it gets. The number out of China most people are paying attention to today, the one they will be fretting about for some time, is imports. Chinese imports were up by just 4.5% year-over-year in December, the worst month by far since December 2016 (every other month in 2017 was double digits, with an average January thru November of 17.6%). 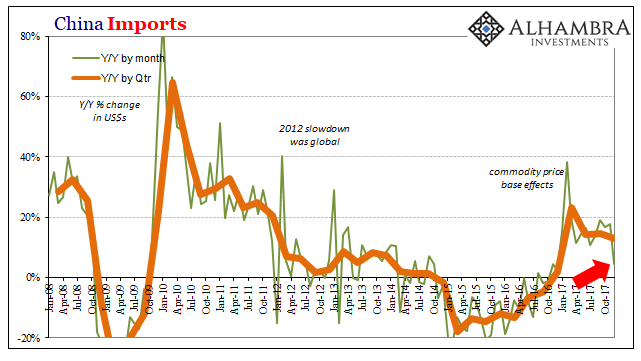 Now, one month of bad data doesn’t necessarily mean Chinese imports are about to run back toward 2015. What it suggests is that like the rest of 2017 we’ve seen the best that “global growth” can offer this time and China’s further contributions to it. The reason for that is what we find for lack of momentum for exports.

For as much as officials and Western Economists keep pushing the “rebalancing” idea, China’s economy remains an investment-led system where FAI (the investment) is derived from the industrial sector and therefore exports. China is inside and out, as it has been for a long time, the barometer of global growth because it is all the all-important marginal pivot in the process.

When industry/manufacturing/exports was booming before the Great “Recession”, and then appeared to again in its immediate aftermath, the Chinese were perfectly content with their so-called ghost cities. The reason was that that empty construction wouldn’t stay unused for very long, so long as economic growth, based on global trade growth, kept up its expected pace.

The real issue, then, is one of time. If your baseline is pre-2007 China “miracle”, then rabid construction makes sense for rapid, sustained growth that will narrow the timeframe considerably between construction and use. If the actual baseline turns out to be far different, then questions about asset bubbles arise due to what become obvious incongruities. Vacancy does matter. The term “ghost city” becomes ubiquitous with all its negative connotations.

In very simple terms, there will be more ghost cities built if private entities in China, with some direction from (mostly local) government, feel that they won’t be ghost-towns for very long. If, however, it starts to feel like they might stay empty for too long, or have been already, then you will see less of them being developed and constructed. What ultimately dictates that difference is the export sector, no matter how much “rebalancing” is claimed. 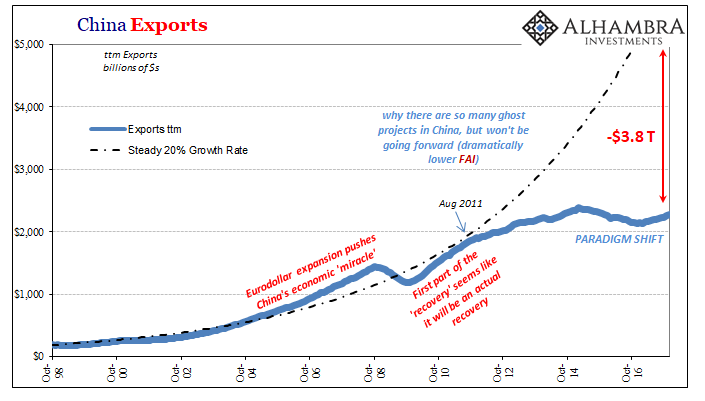 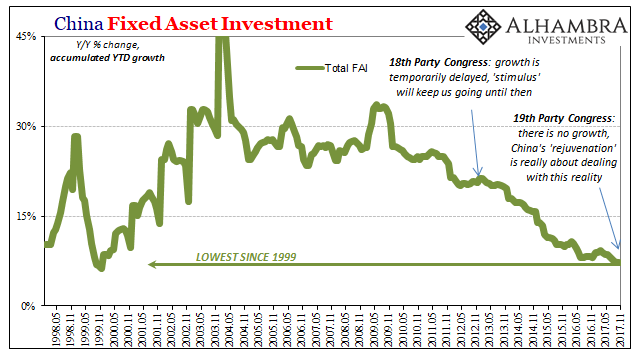 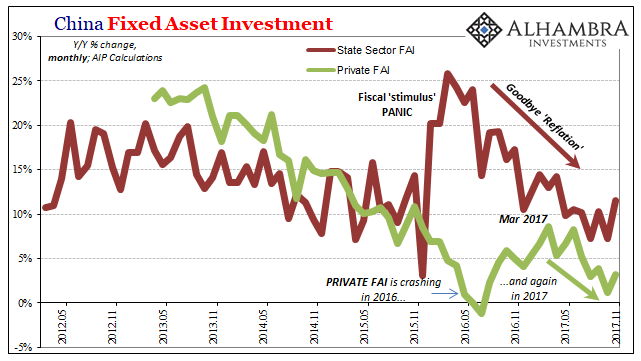 The small rebound in the second half of 2016 in especially Private FAI unsurprisingly leads the one in Chinese imports. The deceleration and potential retrenching of Private FAI later last year seems to be pushing the same now in the other direction (with December’s import number concerning for that reason).

How much China imports sets the agenda for the rest of the global economy beneath it on the supply chain. Which potentially means: no acceleration in top level global growth (despite it being, purportedly, synchronized for the first time since 2007), lower Chinese exports, less manufacturing growth, reduced need for additional ghost cities, lower FAI as fewer will be constructed, leaving less of a need to import material. 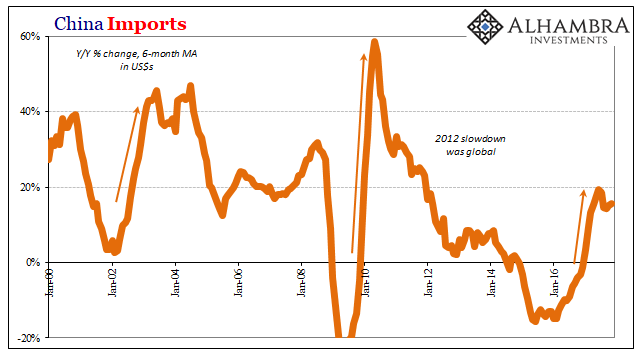 The result is another upturn without much upside, leaving everything else susceptible to rising perceptions of economic then financial risk. That then leads (inevitably?) toward global re-evaluation of those risks and what ultimately turns into the monetary conditions sufficient to produce the next downturn.

Momentum matters, a lot. What matters more is why, and how, it remains absent.