For a very long time, they tried it “our” way. It isn’t working out so well for them any longer, so in one sense you can’t blame them for seeking answers elsewhere. It was a good run while it lasted.

The big problem is that what “it” was wasn’t ever our way. Not really. The Chinese for decades followed not a free market paradigm but an orthodox Economics one. This is no trivial difference, as the latter is far more easily accomplished in a place like China. Economists do love their Keynes, a doctrine that falls on a different part of the same spectrum as Communism.

At the 17th Communist Party Congress way back in 2007, the idea of the “harmonious society” was in trying to strike some balance between growth and living with growth. Rapacious transformation had uglied for a great many the simple basics of human life. The Chinese understandably did not want to give up the economy for it, however.

In seeking that balance, the 17th Party Congress altered slightly Chinese communism. Party officials there going back to Mao had always sought to make sure of their distinct version of political, social, and economic doctrine. Communism in China wasn’t Communism in Russia and the Soviet Union, though you’d be forgiven for mistaking the vast similarities.

For a very long time, starting in the eighties and early nineties, there was an embrace of markets as if that would define China’s ideological difference. After the massacre at Tiananmen Square, as well as the fall of Soviet Russia, a more Western embrace seemed almost easy by comparison. That included total dollarization in money as well as economy. China opened a bit, and the “dollars” flowed in.

The 18th Communist Party Congress was sort of unique in that it was situated between that form of Chinese Communism and what is shaping up to be the next one; what is old is new again. Held in late 2012, government and political officials installed Xi Jinping on the basis of the same “harmonious society.” What was at odds then was the economy, it was sputtering somewhat contrary to all mainstream predictions of full and complete recovery from the global Great “Recession.”

That particular Congress assured the world that China was still committed to growth. The world in response breathed a collective sigh of relief because without the Chinese on board the global economy would (could) not get anywhere. The Western Economic playbook of “stimulus” still guided Chinese Communism; the recovery was delayed, they reasoned, so monetary and fiscal “stimulus” would be deployed a second time (2009 the first) to cushion the deficiency as well as assure its eventual arrival.

Something changed, however, by the 19th Party Congress held last fall. The idea of Chinese communism still officially revolves around the “harmonious society”, only now ten years later that harmony is to be defined more so by “quality” of economic growth without much of the “quantity.”

Over the weekend, Communist leaders released their official targets for a number of factors and aggregates. Premier Li Keqiang offered his annual report to the Chinese Congress which like the 2017 version the government is again targeting 6.5% for GDP. Only this year unlike last year they are no longer referencing the phrase “or higher if possible.” The economy ended up reaching 6.9% real GDP growth for all of last year, but in withdrawing the statement there is some reason to believe the Chinese are further making a statement.

For several years in the West close to the end of the Federal Reserve’s QE’s there was a near-constant reference to “clogged transmission mechanisms.” The monetary program wasn’t living up to its grand expectations, so one answer to the languished results was to suggest monetary policy was bottled up by other unknown factors. It really was just the orthodox way to acknowledge that it wasn’t working.

In addition to the growth omission, Premier Li also mentioned the goal to “improve the transmission mechanism of monetary policy.” Though using Chinese GDP is an exercise in viewing official manipulation, there are some broad economic strokes to be determined from it. 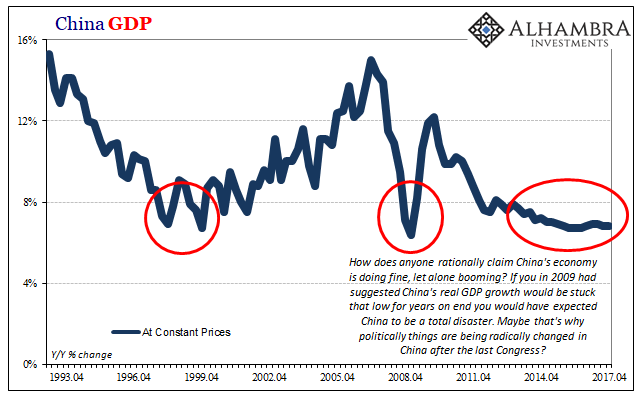 To start with, if GDP presents the best picture for any economy, especially China’s, then there is every reason to believe it’s worse than it looks. And it already looks pretty bad. The Chinese are stuck at a level that in the past has been labeled as dangerous. It used to be a rule of thumb that 7% growth was like recession for this country, now it’s a ceiling where if the Chinese economy gets close, it’s celebrated worldwide as somehow evidence for a boom.

One element that is clearly missing is monetary expansion. In GDP terms, we can easily observe the monetary dimension by the distance between nominal and real GDP growth. 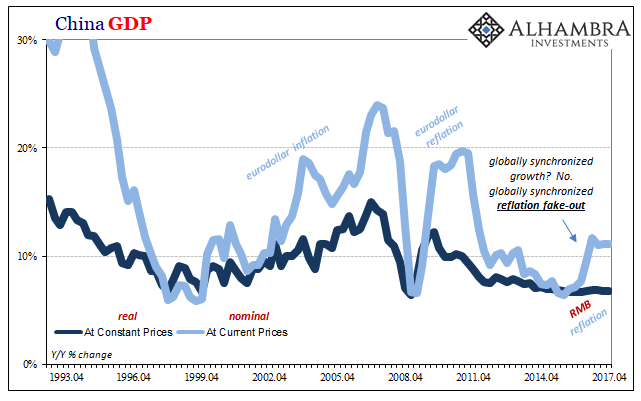 Notice the big difference over the last few years. Nominal GDP acceleration was always accompanied by real GDP acceleration – just as the orthodox Economics textbook claims. If you “stimulate” via monetary policy, though it might produce consumer price inflation it should also produce real economic results, too.

In China’s case, however, monetary stimulation in both the pre-crisis as well as immediate post-crisis periods was never really PBOC monetary policy. It was instead the “dollar’s” massive influence (up and down).

Following the “rising dollar” of 2014-16, there wasn’t as much “dollar” reflation as RMB reflation as a matter of conscious policy. For the first time in later 2016, officials had to experiment with chronic “dollar” insufficiency and what to do about it. They are in 2018 still experimenting (with the latest results still inconclusive if leaning perhaps in the wrong direction).

In nominal terms, China GDP in 2017 rebounded in a manner real GDP did not. We can observe this same divide in other places, too, such as how the Chinese PPI shows inflation in a way China’s CPI does not. The difference is not subtle; the “dollar” baseline is that for the whole global economy, and China’s economy cannot perform without real global growth, leading instead to the “wasting” of RMB monetary expansion. 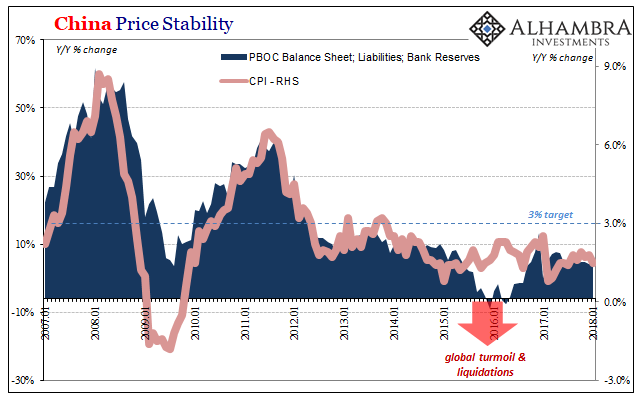 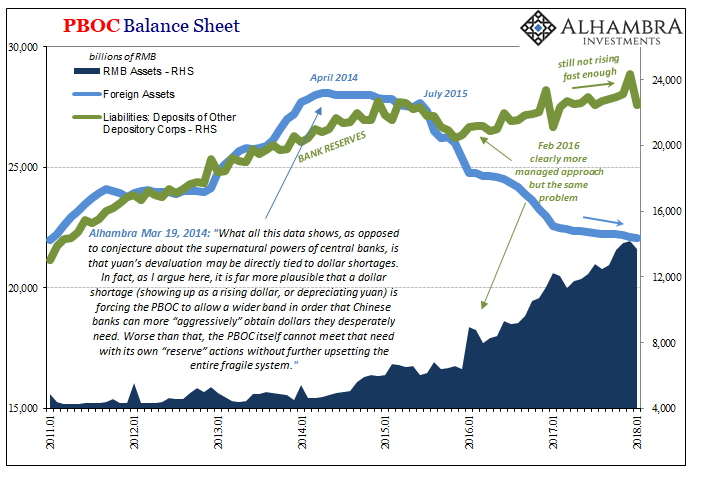 From this view, it’s quite easy to see what has changed between the 18th and 19th Communist Party Congresses. After accounting for a data discontinuity in the NBS estimates of real GDP for Q1 2016, the difference is dramatic and conclusive.At the 18th Congress in October 2012, China’s economy was only off its track by a little. There was, by the orthodox Economics textbook, every expectation that would only be a temporary setback. 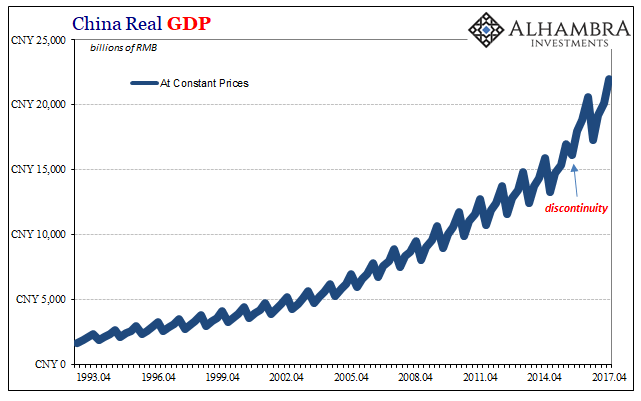 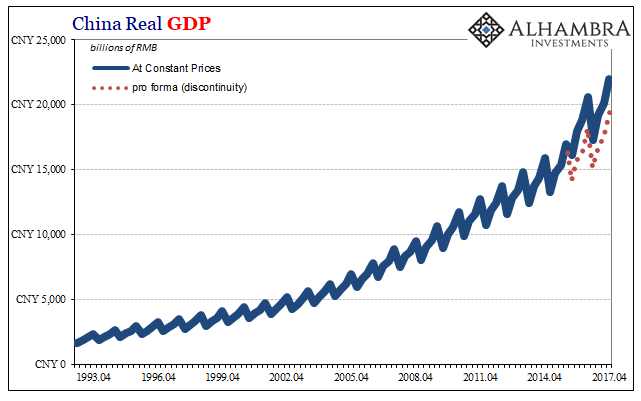 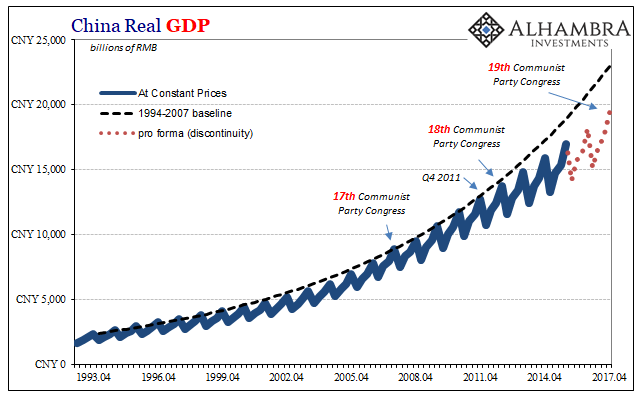 By the 19th Congress, however, it’s much more definitive. Economics in the Western style has utterly failed. In nominal terms, meaning the drag of “dollar” deflation, the gap is much, much worse (and in many ways this is the more appropriate standard): 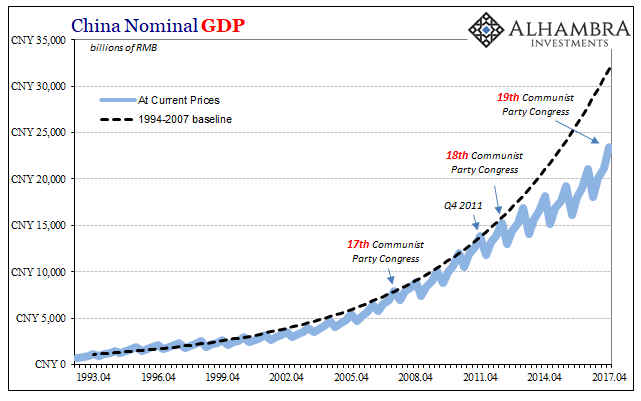 It’s really easy to see why Li is talking about “improved monetary transmission.” This doesn’t mean the PBOC is about to go nuts with RMB, rather in referencing “efficiency” the government is acknowledging the waste (or in PBOC Governor Zhou’s wording, the warning over leverage).

China’s immense debt load was predicated on the old baseline, the one that in 2012 still seemed easily within reach – especially with global “stimulus” then being offered by everyone everywhere. Though many acknowledged some risks, the idea that China’s economy out of anyone’s was going to suffer a total paradigm shift would have seemed to the vast majority a low probability event.

In short, all that debt was written under 18th Party Congress assumptions. The 19th Party Congress is the one that has had to work out what could happen once those assumptions are broadly and fatally discounted. The textbook says you can always inflate debt away. China tried but the eurodollar system overwhelmed it, and now they have all the debt and still no economy.

Xi Jinping’s name was first added to the Communist constitution at the event last October. It is being further amended to allow him to continue serving as many successive terms as President as he many choose. And now official projections omit “or higher if possible” from an already very low level of highly manipulated GDP growth while at the same time referencing the efficiency of monetary policy and its “transmission mechanism.”

This is the altogether disgusting state of the world. China’s Communists are doing more honest assessments in words as well as action than any of the Western so-called democracies. That those actions by and large appear more and more authoritarian only adds to the revulsion. Not only do they know more about the dollar than any US Treasury official, they also appear capable of learning in a more forthright manner about the drastic implications of it.

This difference is easily explained by Economics. In the West, Economists hold all influence about economic (small “e”) opinion. Having spent decades creating Economics, they will not easily surrender it, which they would have to do if they ever admitted there was no recovery and worse the reason for that state is right in their own back yard (global money). Thus, they talk up the results of using the Economics textbook more forcefully as time passes and those results remain overall dangerously deficient (feeding distrust in the process). No one can figure out why China is moving backward.

The Chinese have only borrowed Economics for what they thought was a permanent path to modern prosperity. Since 2011, that dream has been snuffed out, the flaws in Economics, particularly of the monetary variety, all-too-evident. Thus, Chinese Communism can be more easily transformed devolved back toward more China and less Western Economics. If the latter no longer works or has been proved it can’t work and may never have to begin with, then why not go backward toward the former.

Xi Jinping more and more seems to be searching for the path of Mao Zedong. It was, all along, China’s pre-crisis growth baseline that appears to have kept him off of it. As it disappears into the past without hope for the future, this choice might end up being unforgiveable, but in honestly assessing China’s economy it is at least understandable. Not just for and in China.