China’s Xi Really Had No Choice

China’s Xi Really Had No Choice

Chinese President Xi Jinping appeared to back off the heated trade rhetoric over the past few months. In a speech drawing intense focus, Xi, while stating nothing that could be taken as definitive, pledged a “new phase of opening up” China’s vast marketplace.

China does not seek [a] trade surplus. We have a genuine desire to increase imports and achieve greater balance of international payments under the current account.

The country’s massive and structural merchandise trade surplus is a weakness in geopolitical terms. There is in far too many places substantial and legitimate resentment of it, and the Chinese leadership knows very well that it cannot be justified pell-mell. Should China wish to fight the rising tide of fragmentation, this isn’t the place.

Still, it was a far cry from the initial Chinese response to President Trump’s imposition of tariffs and restrictions. Promising retaliation of equal measure, they sought to impose $50 billion in additional duties on mostly American soybeans. Then Chinese officials spent last week leaking potential additional counteractions, including CNY manipulation (yeah right) and the disposition of its forex reserves, largely UST’s (here we go again).

It may be that the official position has softened in recent days, or it may just be the dawning recognition that China, contrary to most assessments, is in a much worse overall shape than the United States. We talk about global Japanification including what’s been done to the US economy since August 2007, but it has been far from uniform playing out this way.

The US system, as riddled with imbalance as it may be, no recovery anywhere on the horizon, it isn’t quite Japan 1989. That’s a far darker and more dangerous scenario. And it’s the one China is much closer to than anyone else.

In 1990, Japan’s share of global economic output (measured by GDP) was about 17%. Not only that, much of the rest of the world had spent the latter half of the eighties extrapolating just how long it would be before Japan’s economy might overtake the US as the world’s largest. Today, instead, it’s proportion is less than 6%.

The similarities Japan 1989 and China 2018 are more than just asset bubbles (and how we don’t and didn’t really know how big they are/were). Japan’s economy was Japan Inc, an export-oriented production and industrial base. Domestic consumption was far less than typical for developed economies, meaning that for its own purposes Japan was in deep oversupply.

A great deal of that misallocation, or malinvestment as the Austrian’s call it, was predicated on the parallel processes of export growth driving credit growth (with the former performing as collateral of sorts, at least perceived economic security for the latter). Once the credit problem blew out, Japan Inc unceremoniously withered leaving in its aftermath the zombification problem for both industry as well as finance. 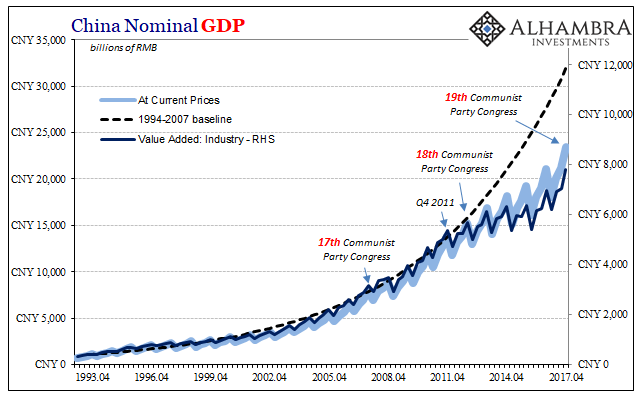 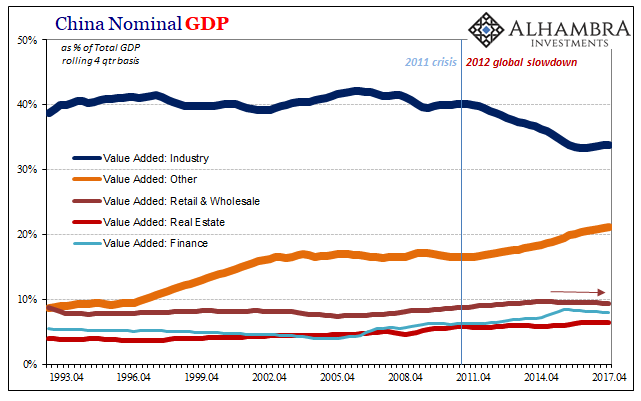 China’s are even more extreme. The idea of rebalancing is really about time and margin for error. They have to swing away from their industrial base simply because the global economy hasn’t recovered – and isn’t about to anytime soon. If rebalancing was anything other than a last-ditch excuse, then Chinese authorities never would have incentivized so much financial explosion between 2008 and 2012. They did so on the premise that the world economy would recover, and China could go back to something like normal (precrisis) growth again.

Starting from that position, however, you can’t just expect a services/consumer economy to spring up and exactly match in growth the retreat of the industrial, export base. It doesn’t work that way. 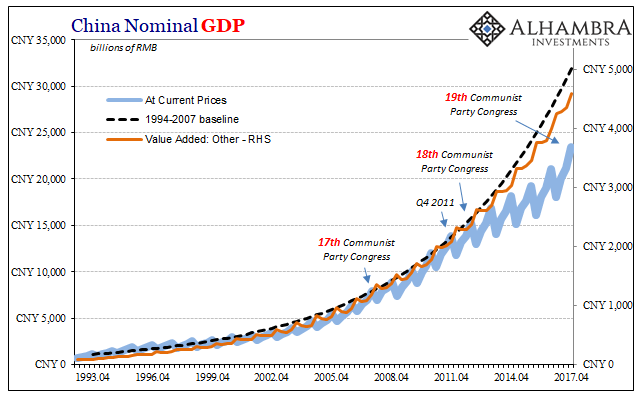 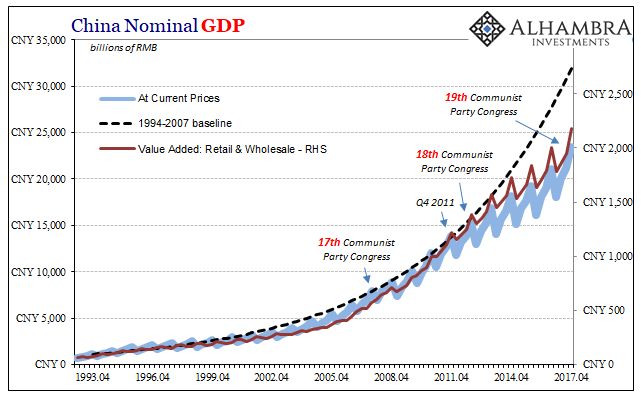 While manufacturing has underperformed sharply since the 2012 slowdown, the other parts of China’s economy just aren’t yet large enough to offset the decline – and so overall the whole system radically slows toward what really is a paradigm shift fraught with enormous dangers (especially financial and leverage). 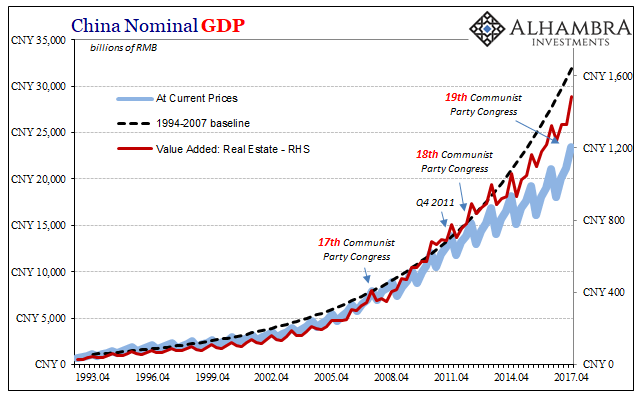 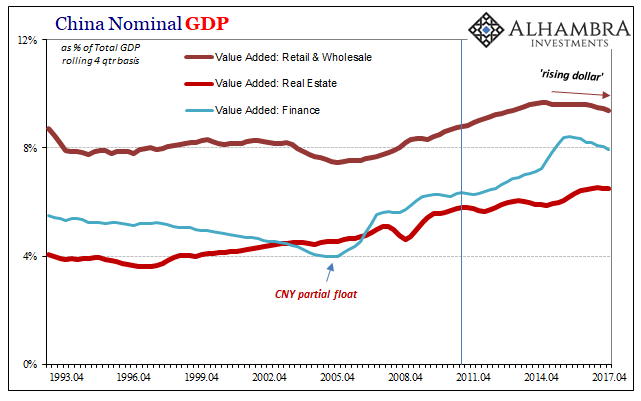 As Chinese industry shrinks in importance, what really rose to take its place was even more unstable still: government spending, the financial sector, and the asset bubbles that often accompany both the others. They really are more like Japan 1989 than anyone seems ready to appreciate. I wrote just a week after China’s shocking non-devaluation devaluation in August 2015:

The idea in both situations [Japan in the 1980’s; China in the 2010’s] was to use internal monetary mechanics (bubbles, as the Yellen Doctrine now asserts as useful) as a bridge over or around heavy adjustments. In Japan’s case, the believed restoration of a more favorable external balance did not arrive before the monetary expiration. I think that is where the PBOC was in 2013, namely that it took the 2012 global slowdown as the final say in the matter of “the other side”; there was only to be an ugly economic fate.

Almost three years after I wrote it, and five years after the sea change internally, it’s nothing but ugly and nowhere getting better (all Western commentary aside). What to do when confronted with that situation?

At that point, I think they made a conscious effort to try to avoid Japan’s disaster by actively engaging to manage a bubble decline regardless of how much growth had to be “sacrificed” to do so. All that has happened since March 2014 seems to conform to that effort.

If that’s what you are trying to do, you avoid at all costs making a bad situation worse by escalating a fight nobody is likely to win. You cannot afford to stir the pot even a little because the margin for error is practically nil, the very warning the former PBOC chief gave just last November. 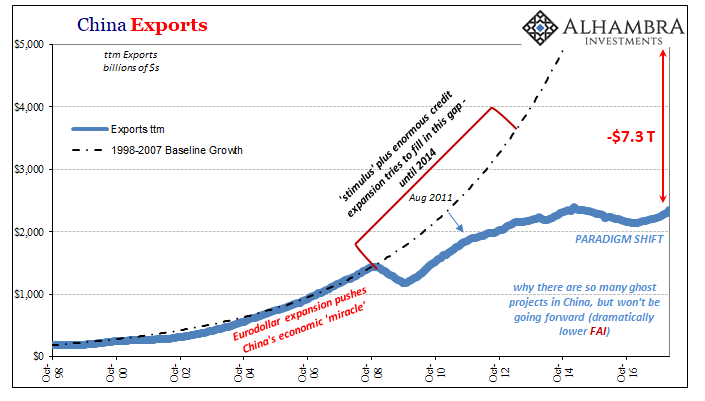 The short version – China is in much worse shape and therefore can’t do much about anything (it’s why so tepid de-dollarizing). What’s left open to them, in my view, is to further play for time; to not upset things too much so that they might take what small chance to thread that tiniest of needles and avoid sharing Japan’s fate. In that respect, despite so many years now (things move slower in eurodollar decay, not faster), they are still stuck on Japan 1987 rather than Japan 1989.

It’s like a financial/economic doomsday clock in that respect. As I see it, they prepare for the worst while at the same time desperately trying to avoid anything (that they can control) that moves the minute hand closer to midnight.

It may sound like an argument to press them even further taking advantage of their relative weakness (the US is in no position of strength), to try to win at a trade war, but China’s downfall should it come to that would lead to enormously negative consequences for everyone. That’s the trick, the real problem. There are no winners down this road.