There is no change to the risk budget this month. For the moderate risk investor, the allocation to bonds is 50%, risk assets 45% and cash 5%. Stocks continued their erratic ways since the last update with another test of the February lows that are holding – for now. While we believe growth expectations are moderating somewhat (see the Bi-Weekly Economic Review) the change isn’t sufficient to warrant an asset allocation change. 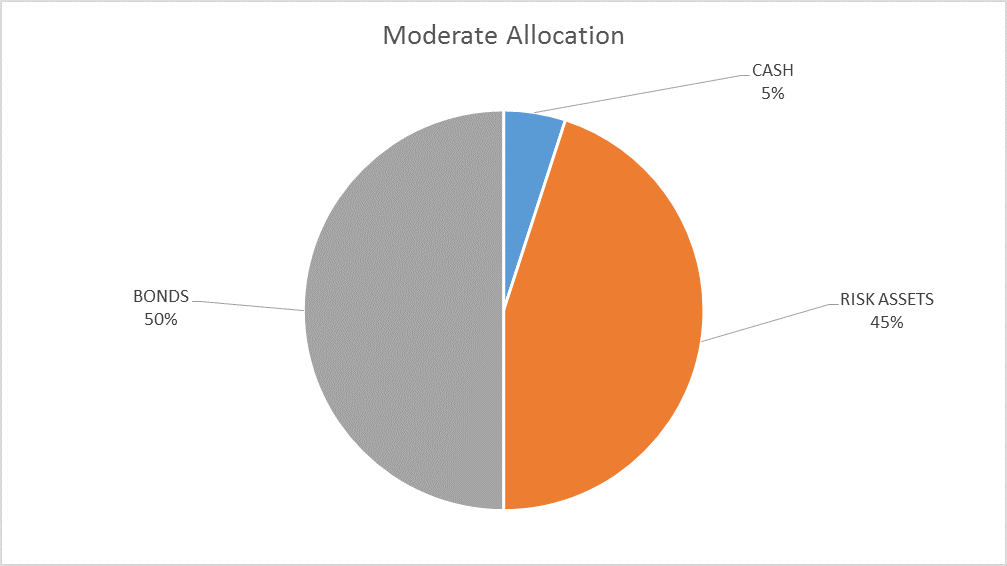 The job creators in our districts…have suggested to us for months now that the biggest obstacle to economic recovery and job creation is the policy uncertainty created by Washington.

Some of the kvetching was nothing more than partisan political rhetoric but there is an element of truth to it as well. Business owners need some level of confidence that they aren’t going to get up tomorrow and find that some new government policy has laid waste to their carefully considered plans. On the other hand, I don’t think most business people are sitting around waiting to hear from their Congressperson before executing their business plan. If they even have a business plan or consider government policy at all. There’s something about the real world problems of running and growing a business, meeting payroll and trying to figure out how to beat your competitors that renders all business plans ridiculous and most government policies an afterthought.

We haven’t heard much about uncertainty from Republicans recently. Now it is the Democrats turn to point to the Oval Office and opine about the plight of the business person trying to figure out what will emanate from the Presidential twitter account next. Tariffs, trade wars, Syria, Russia and immigration, not to mention the once unmentionable rumors surrounding the President’s personal life. Surely, if there was uncertainty under the Obama administration it must be multiplied under President Trump, right?

I will certainly admit that I have come to dread turning on the financial channels in the morning. You never know what Presidential tweet has pushed the futures up or down several hundred Dow points. One day he’s imposing steel and aluminum tariffs on the entire world and the next his surrogates are out with a list of countries that will be exempted with little rhyme or reason to the exceptions. One day he’s warning the Syrians and Russians that missiles are about to rain down and the next he’s saying never mind, not today, but maybe tomorrow. Oil prices jump and then pull back. Aluminum and steel prices get jacked up even before the tariffs are in place. Stocks gyrate as investors try to guess the impact on the economy.

While this uncertainty has existed since the beginning of the administration it has ramped up even more in recent weeks. The trade rhetoric, in particular, has created havoc as investors try to separate winners from losers and also guesstimate the impact on the economy as a whole, thoughts of Smoot-Hawley swirling in the background. And this increased uncertainty is the cause, in my opinion, of the recent moderation of growth expectations I outlined in the Bi-Weekly Economic Review.

But as I said in that update, the change is minor and not yet a problem that requires us to do anything other than monitor the situation. We’ve had only a minor and very normal stock market correction to this point and our indicators don’t point to anything more right now.

Policy uncertainty is not new. Indeed, uncertainty is the rule, not the exception. Every new administration comes in with plans that may or may not become actual policy. Every administration faces mid-term elections where they will likely lose seats and maybe control of their policy agenda. This administration is no different in that regard. And just as they did under President Obama, businesses will figure out how to get the job done regardless of the stream of consciousness that is the Presidential Twitter account. If you are waiting for a period of certainty to invest, plan on waiting a very long time.

The 10/2 curve resumed flattening since the last update, falling 16 basis points to a new low for this cycle. That is a reflection of reduced nominal growth expectations. Still, the curve is not acting as if recession is imminent. In the last cycle, we hit this level in May 2005 so we could still be quite a ways from recession. 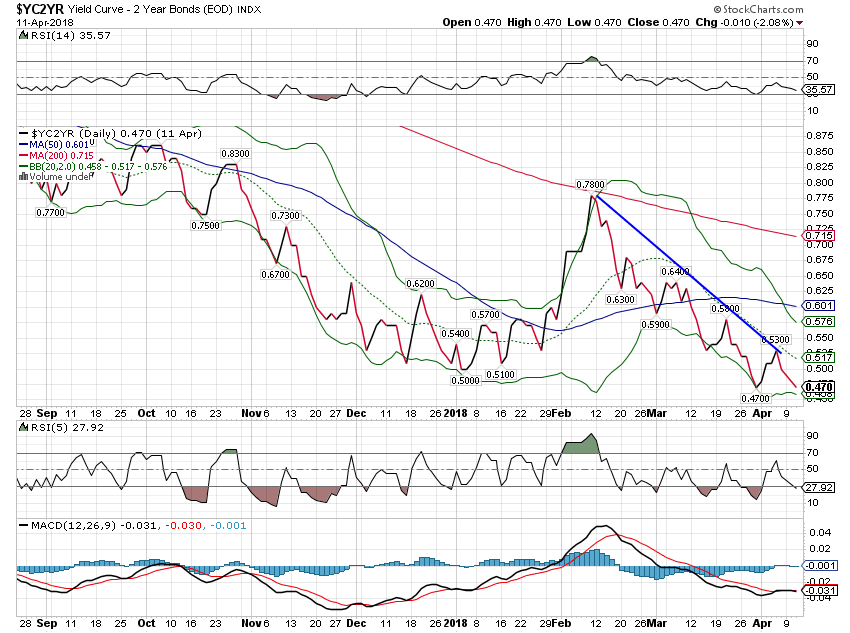 10-year TIPS yields pulled back from their recent peak, falling about 6 basis points over the last month. As you can see, we are still within that range that has prevailed since mid-2013. We are backing off slightly from the top of the range but have not broken out to a new, higher range.

Credit spreads were essentially unchanged, just 3 basis points wider over the last month. Year over year, spreads are still narrower. There is no stress in junk bonds. It is interesting that the volatility we’ve seen in stocks hasn’t spilled over the junk bonds.

Earnings season is just getting underway and stock prices haven’t changed much month to month so valuations haven’t changed much either. Expectations for this quarter are very high with estimates for S&P 500 earnings growth in the high teens. That has risen considerably since the beginning of the quarter when estimates were closer to 12%. That is a bit unusual for this cycle as most quarters have seen estimates cut as the quarter progresses. I expect a wider range of results this quarter as predicting the impact of tax reform isn’t as straightforward as it seems. I suspect we will see some big surprises in both directions. If this quarter runs like last quarter, missing will hurt a lot while making or exceeding the estimate won’t have much impact. That’s what happens when expectations are so high. So stand by, it’s going to be a wild earnings season.

Long-term momentum indicators for the S&P 500 are still positive as we’ve corrected much of the overbought situation that started to develop late last year. This correction, despite the volatility, has been very mild so far. 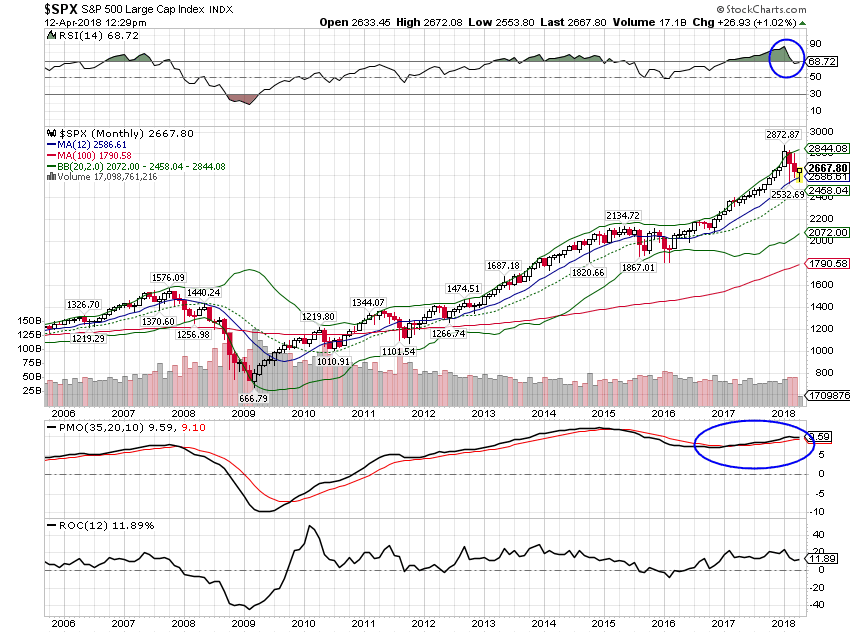 Short-term momentum is turning higher but there is a lot of overhead resistance to overcome. If we go back to test those February lows again, expect them to give way. 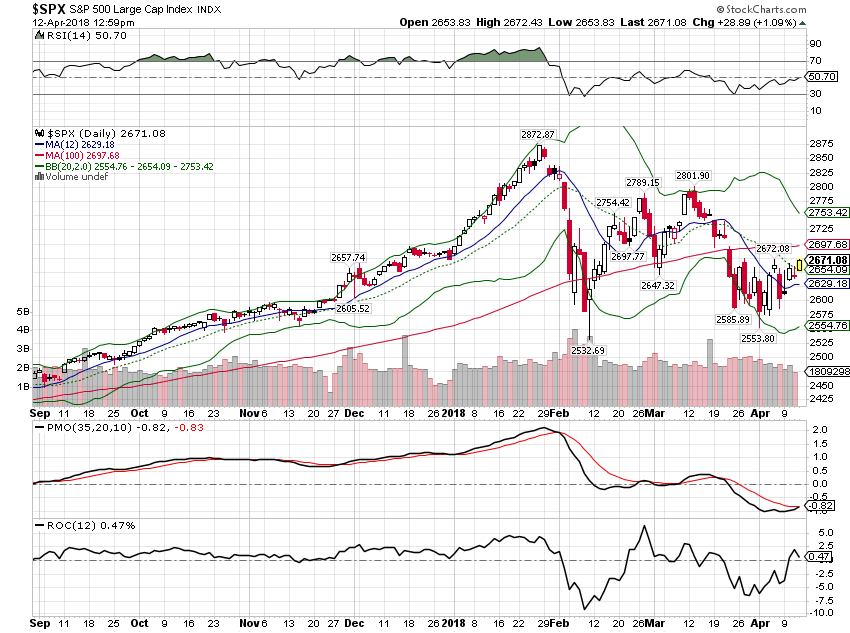 The dollar downtrend has stalled as we expected. We may get a bounce of some kind but as I’ve said repeatedly, if the President wants a weaker dollar that’s what he’ll get. Sentiment has turned pretty bearish recently so expect some kind of rally but don’t expect it to change the intermediate downtrend. 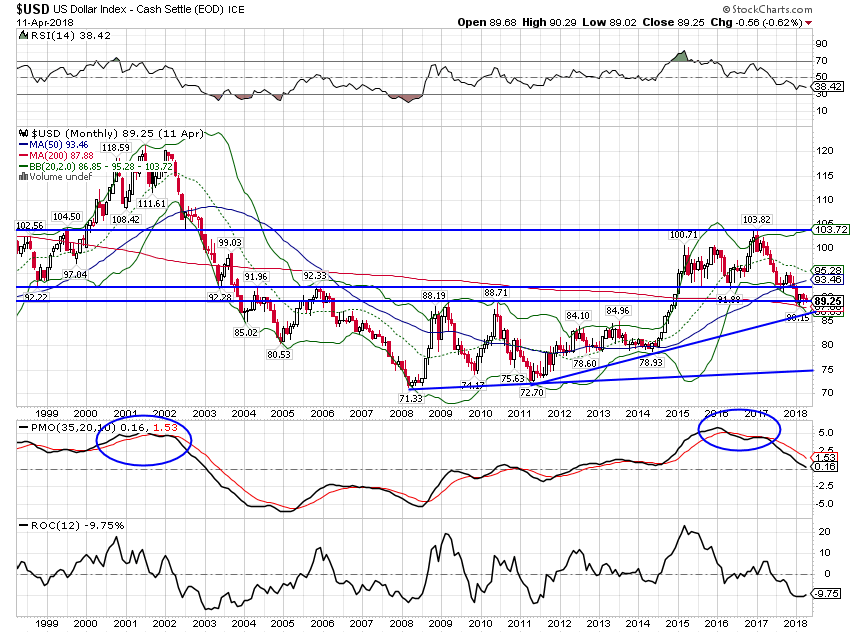 The uptrend of foreign stocks versus the S&P is still in place but it has been a frustrating trend. With a weak dollar, I would have expected a greater degree of outperformance. But weekly momentum is turning higher now. 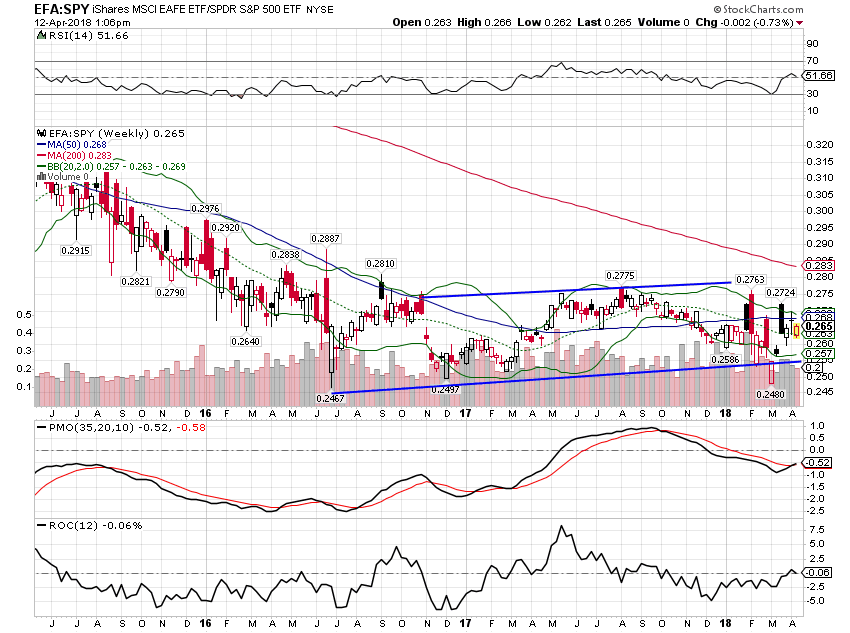 Emerging markets continue to outperform developed markets but the trend has been challenged in recent weeks. Still, I see no reason to for this trend to change right now. 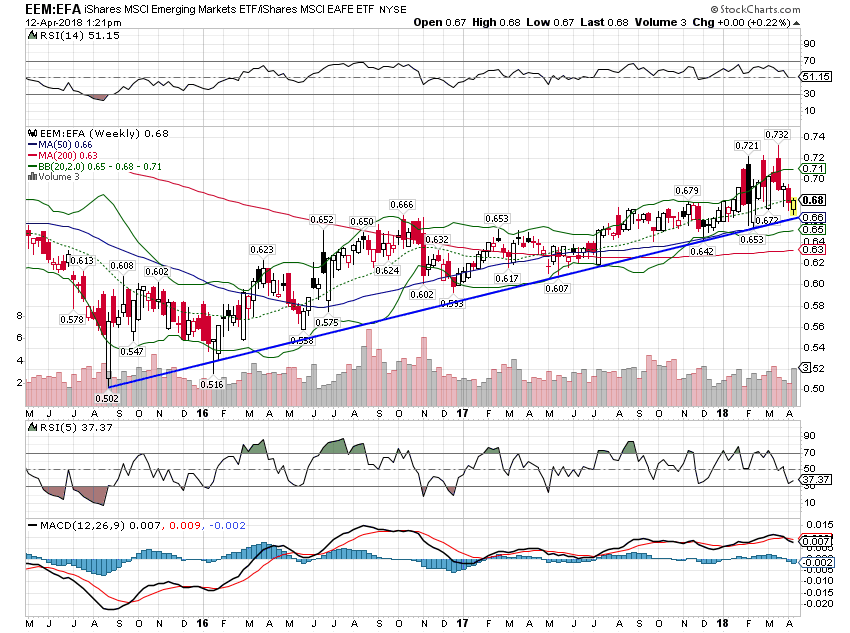 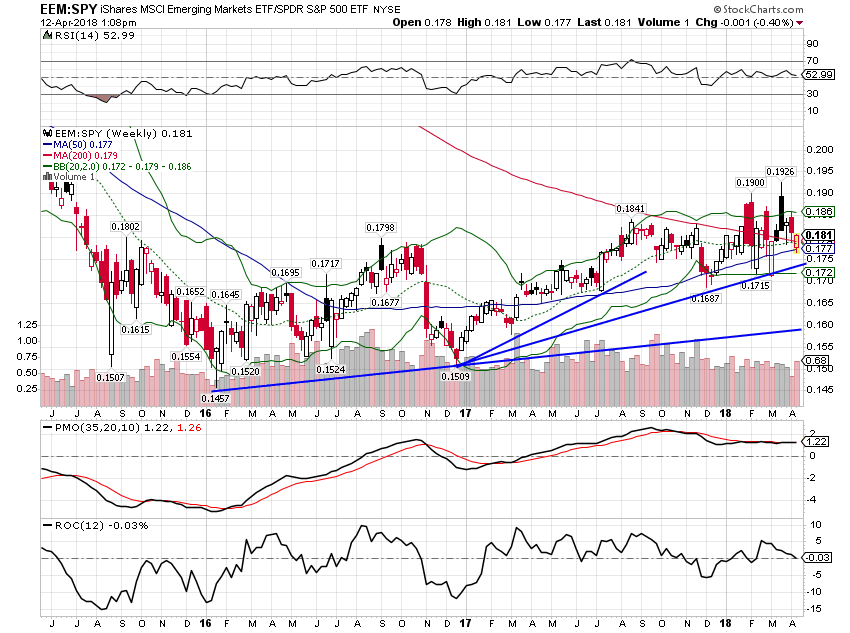 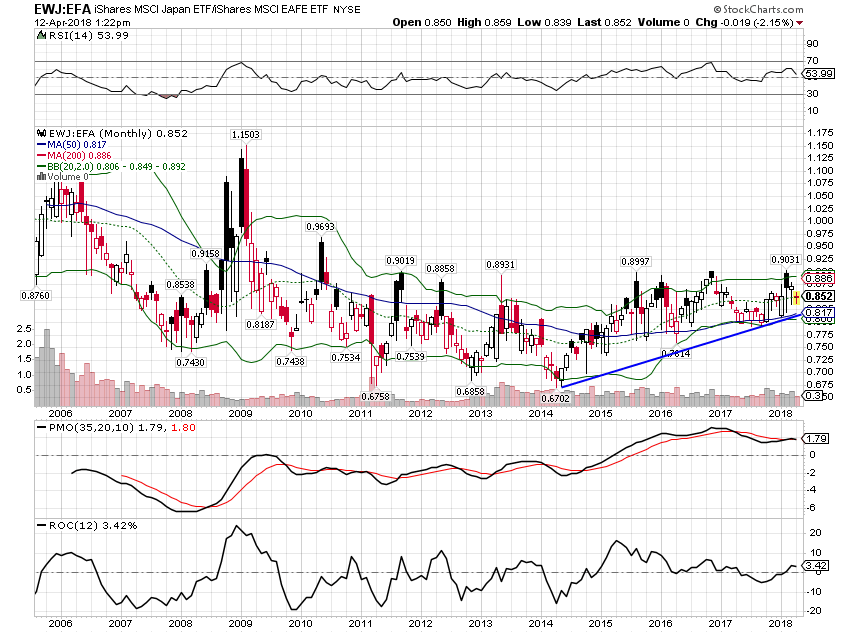 Commodities have recently broken out of a short-term downtrend, resuming the previous uptrend. Part of this is no doubt due to the spike in oil prices from the Syrian conflict. If that eases and growth expectations continue to moderate, commodities may have a more difficult time ahead. 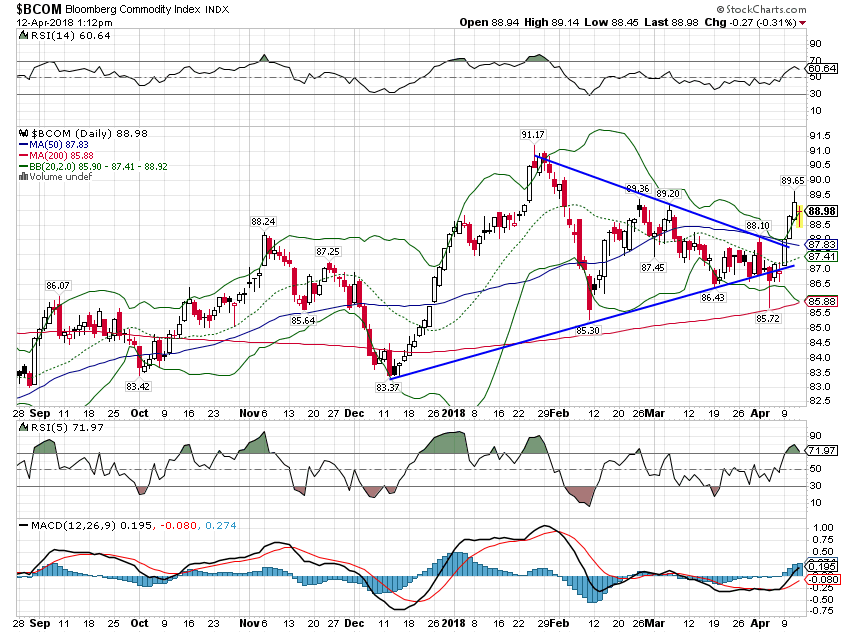 Gold’s uptrend continues despite (because of?) widespread skepticism of the rally. A move above $1400 looks very bullish but that would probably require a further drop in growth expectations and the dollar. 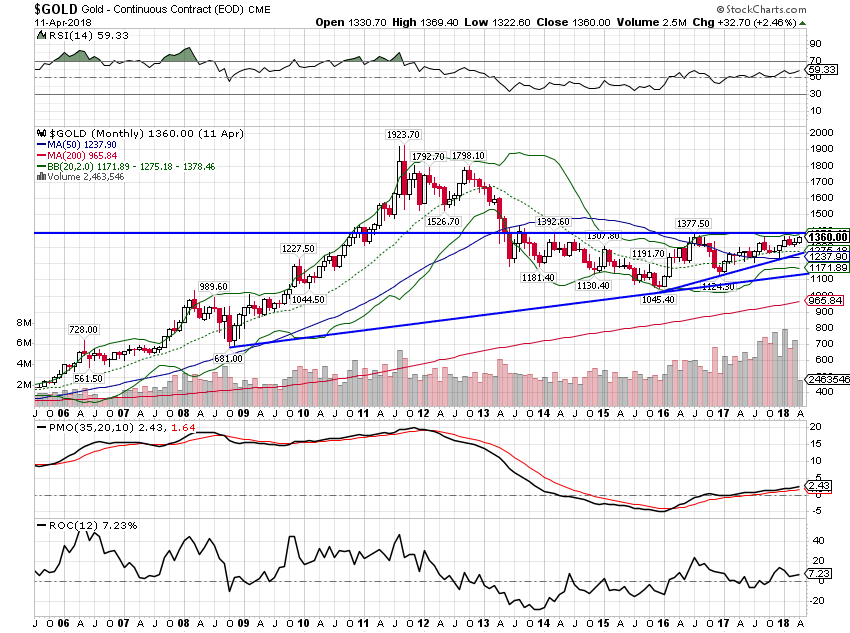 Further evidence of reduced growth expectations can be seen in the recent outperformance of gold versus the general commodity index. 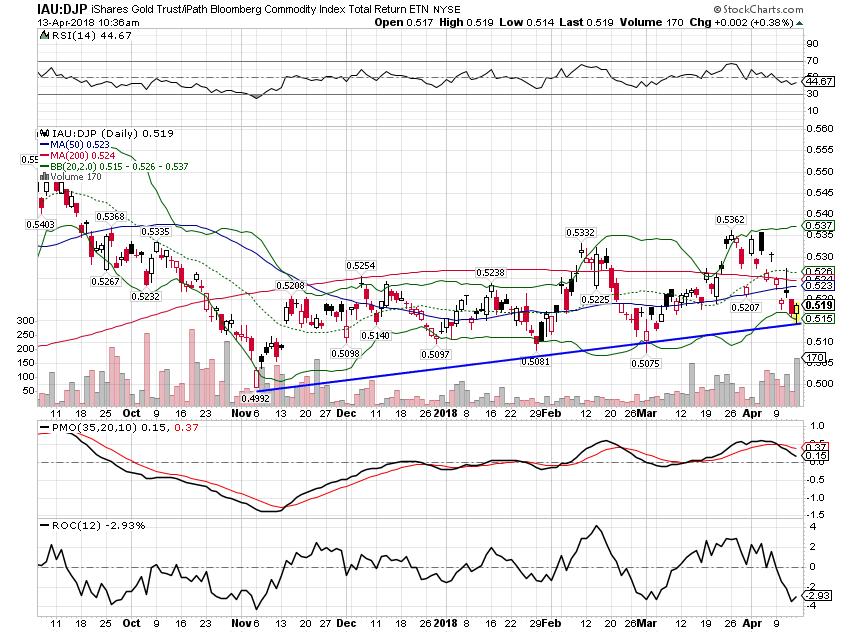 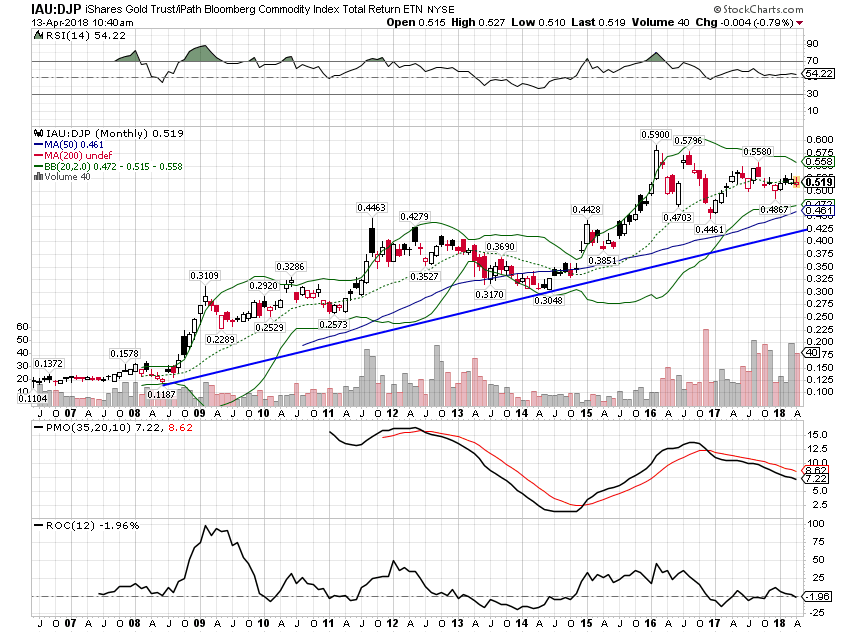 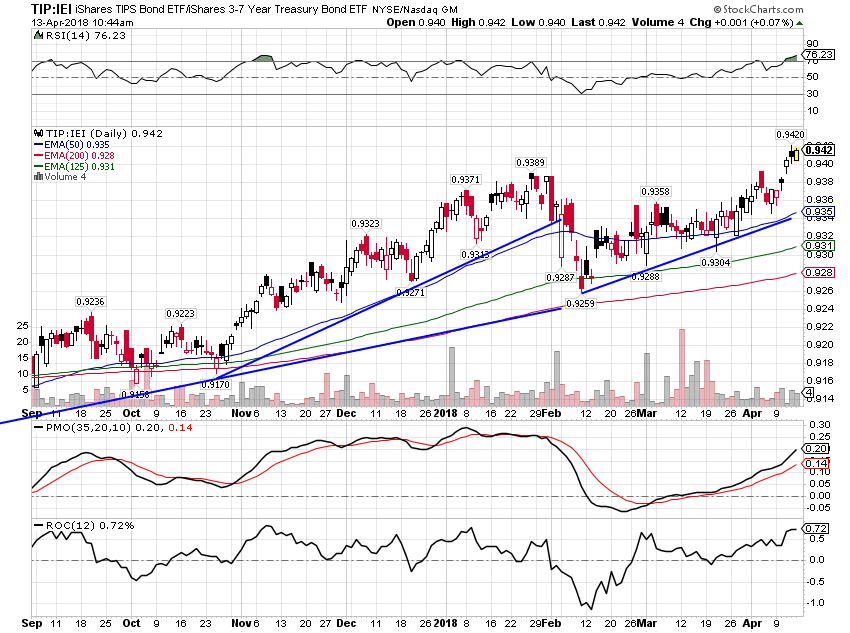 Platinum has recently broken down versus gold and I am throwing in the towel on reversion for now. Platinum has traditionally traded at a premium to gold but that relationship may have changed permanently. 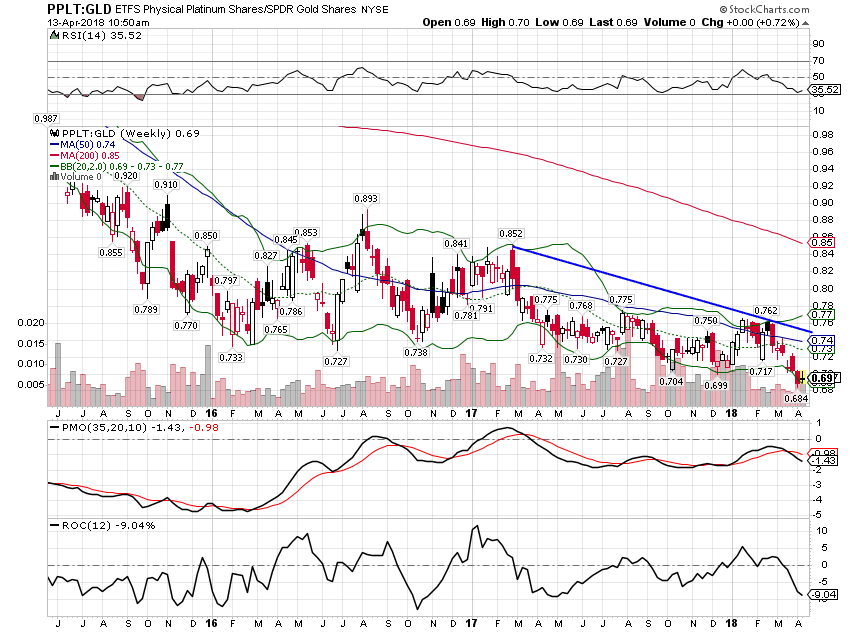 I reviewed a wide range of alternatives to our current positions in each asset class. I did not find anything compelling enough to warrant a change but here are some of the potential investments I’m tracking and will consider in future updates:

So, the only change this month is:

Sell PPLT and use the proceeds to add to IAU. 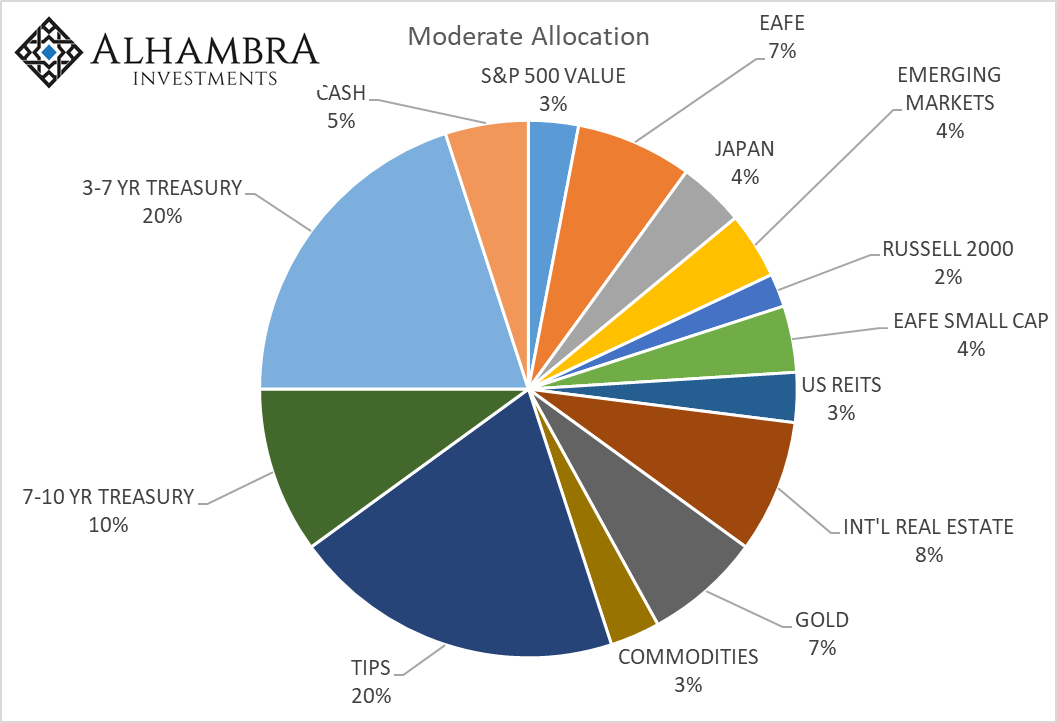