Someone Is On Drugs, Alright

Someone Is On Drugs, Alright

For the second straight quarter, the Bureau of Labor Statistics (BLS) estimates US productivity growth was less than 1%. That’s not surprising given the weakening in output as measured by GDP, the data reported by the Bureau of Economic Analysis (BEA). Productivity is the bridge between the BLS’s labor numbers and the more general economic assessments of the BEA (Private Output – Total Hours Worked = Productivity). 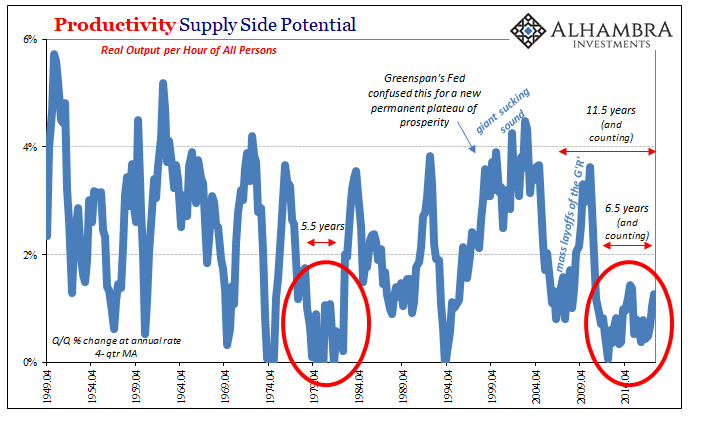 For a very long time now, US productivity has been stagnant. That’s a huge drag on economic performance, though Economists are stumped as to why that was and continues to be. It’s as if US companies don’t want to invest productively in their businesses, preferring to buyback shares and hold the most liquid financial assets instead. These are the actions of companies that foresee little economic opportunity.

One big reason they might feel that way is given to us by these very figures. In the context of a business cycle, what firms want to see after contraction is stability more than anything – the idea that the economy will recover and then continue on that way. Setbacks are devastating in any fragile environment. The last thing anyone wants, particularly when considering potentially costly investments, is for unevenness. That’s especially true when it happens “unexpectedly” yet consistently. 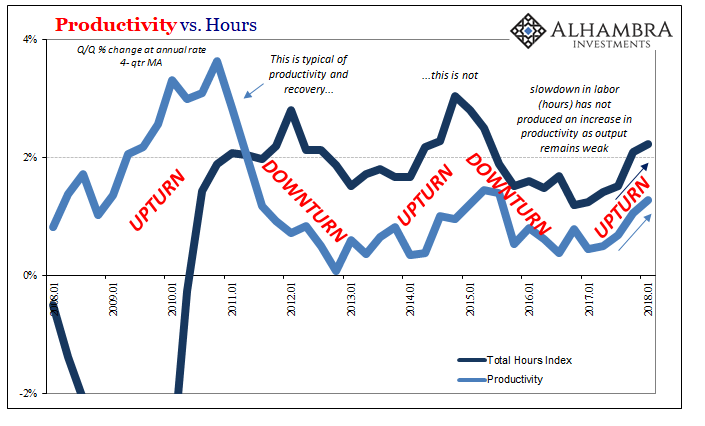 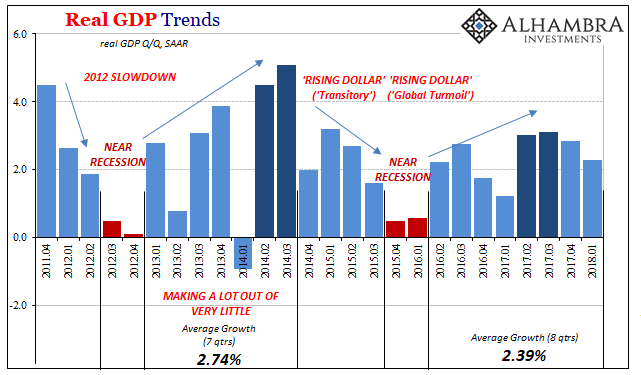 The result is not just uncertainty which gains with each mini-cycle, but also this ratchet effect whereby every upturn is lesser than the one previous. The economic ceiling, so to speak, is reduced each time and the negative effects become cumulative. You can see it at each one of the three peaks above, particularly the last two.

Against this unsteady (at best) backdrop, how in the world does anyone expect wage growth would be accelerating? It’s absolutely amazing that the Federal Reserve and mainstream Economists (redundant) are actually trying to make the case that wage growth is not just a given but is threatening to get out of hand (overheating). It’s plain absurd. 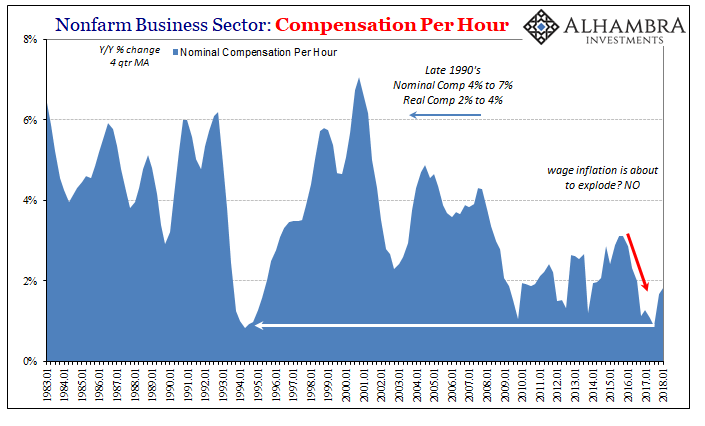 Of course, that’s just what the BLS’s productivity data tells us. Nominal compensation per hour has since the start of 2016 (the worst of the last downturn) increased by rates more in line with continued recession than what the unemployment rate might otherwisepropose. It’s the same in terms of Unit Labor Costs, too, meaning that businesses aren’t just holding the line on wage costs but for all forms of labor compensation.

This trend is no aberration, it’s several years old already and builds further upon a prior historically weak trend several years older still (as I wrote, the negative effects become cumulative). 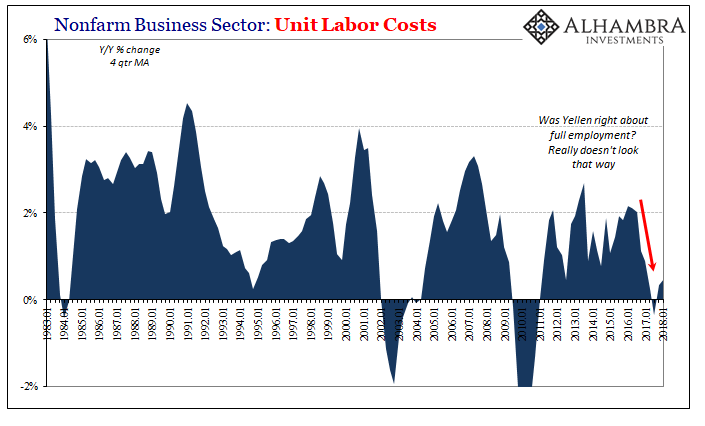 Furthermore, there is evident consistency across disparate data series that just doesn’t exist with the unemployment rate which remains uncorroborated and isolated. While the BLS tabulates Compensation per Hour data from its own sources, the BEA estimates aggregate income from entirely different samples (under Personal Income and Outlays). Yet, the two demonstrate exactly the same results, and it’s nothing like the mainstream narrative. 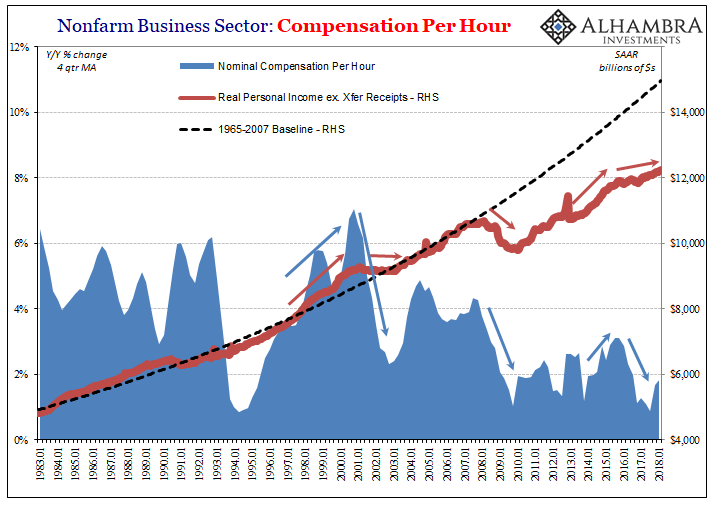 Convention, as derived from Economists, tries to claim that the participation problem is structural rather than cyclical, therefore not a macro issue. In other words, Baby Boomers and opioid users. But if that was really the case, then the unemployment rate would reflect the exhaustion of slack (all the way back in 2015) and so we would expect wages to have started exploding upward as businesses increasingly have to compete for additional marginal workers (labor shortage).

That’s not what’s happening. Not only do you see perfectly the cyclical references in both data sets, each one confirms in the other the continued presence of not just slack but a lot of it. It started back in 2008 (what happened back then again?) and the lack of wage acceleration since matches the seemingly permanent deviation in Real Personal Income. That these inflections occur exactly with the appearance of further additional “dollar” problems since 2008 leaves little doubt.

What it shows is not just the macro problem plaguing the US labor market and American workers, but also exactly why central bankers would be so desperate to deny this is an ongoing disaster. Better to absurdly claim mass retirement and heroin is responsible than to admit there was something really bad about all that 2008 stuff central bankers somehow missed (and now that 2015-16 stuff that was supposed to be nothing more than a minor and “transitory” nuisance).

The current problem with the insinuation is last year’s inflation/boom hysteria. Constant predictions (they really mean it this time) for the unemployment rate to payoff created another false set of economic expectations that is right now being unwound. To that end:

If billionaire bond investor Bill Gross is right, most of this year’s excitement in the Treasury market is behind us and yields won’t see a substantial move from here. 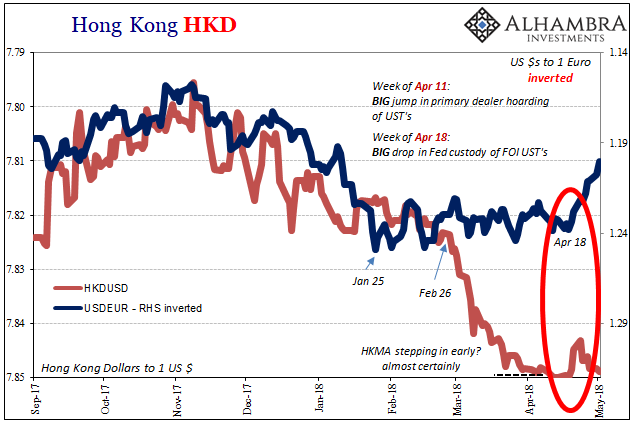 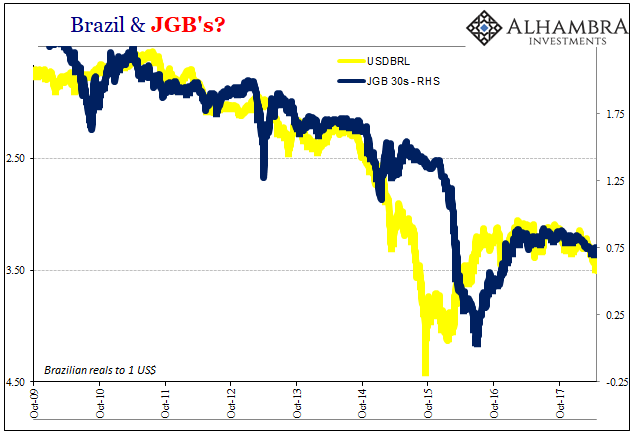