If There Was No QE, How Could There Be QT?

If There Was No QE, How Could There Be QT?

How big should the Fed’s balance sheet be? It’s a topic that has taken over a lot of academic discussions. Recall that before 2008 the level of bank reserves was practically nil. They didn’t play much of a role in any money market, required reserves or not (this should be a big clue). After four QE’s spaced out over many years, there are about $2 trillion of them left.

That’s down from about $2.8 trillion at the peak. Many people have thus called this quantitative tightening, or QT. But in order for that to be a valid description, the build up of reserves would have had to have been quantitative easing. That’s exactly how it was and is described, but that’s not how the world ended up (nor term premiums in the UST market, for that matter). If it wasn’t ever easing, then how could it be tightening?

Looking at it this way, the answer to the original question is, “who cares?” If the Fed’s balance sheet has accomplished very little on the way up, there isn’t really much for it to do on the way down.

But central bankers do care, for one, largely because they continue to view monetary policy as, well, central. It’s as if 2007 and everything that followed never happened. Or, to put it in Yellen’s terms, the last lost decade was entirely “transitory.” One of these days everything will go back to making sense. You’ll see.

The problem with this argument is that it doesn’t even make much sense to those advancing it. Bank reserves are central to post-crisis monetary policy because?

Just last week, the Hoover Institute at Stanford University presented a conference on currencies, capital, and central bank balances (thanks T. Tateo for flagging it). By that description alone they give away their view on the last as it pertains to the former two. Again, however, they are not really sure why. Lorie Logan, who is Senior Vice President of FRBNY’s MOMA, spoke at the conference in laying out current thinking as to QT.

MOMA is no pure academic arm, it is the Market Operations Monitoring and Analysis division at the Open Market Desk. These are the folks whose job it is to watch open market operations and figure out what’s what. Given the behavior of them over the last ten years, had MOMA been more prominently placed in the crisis events it would have been a very tough assignment. Instead, they toil in obscurity, which is a good thing when your answer to QT is some form of I don’t really know.

In the three projection scenarios I’ve shown, reserve balances (as derived from market participants’ expectations) are assumed to be around $400 billion, $600 billion, and $750 billion once a normalized balance sheet size is reached, well below the current level of $2 trillion and consistent with the Committee’s statement. However, we have insufficient information to identify what factors inform these views. [emphasis added]

In other words, they’ve simulated those three scenarios, which, in those scenarios, those are three very different levels. The results are what she further presents, but the highlighted portion displays the extreme level of uncertainty. They have no idea how markets will react to QT because they have no idea how much in bank reserves the system might actually require (which could further propose an option of zero).

How could that be, especially after so many years of experiencing QE? The answer is one they don’t print in the media; bank reserves and monetary policy haven’t ever performed as was expected to have performed. Start with the summer of 2011, and another global liquidity crisis that erupted despite, as then-Open Market Manager Brian Sack admitted in stunned fashion:

MR. SACK. Can I add a comment? In terms of your question about reserves, as I noted in the briefing, we are seeing funding pressures emerge. We are seeing a lot more discussion about the potential need for liquidity facilities. I mentioned in my briefing that the FX swap lines could be used, but we’ve seen discussions of TAF-type facilities in market write-ups. So the liquidity pressures are pretty substantial. And I think it’s worth pointing out that this is all happening with $1.6 trillion of reserves in the system. [emphasis added]

Again, if QE wasn’t ever really easing, then QT might just be nothing more than yet another diversion.

Take, for example, the common perception of what moves the dollar. Everyone says it is interest rate differentials that push the exchange value in one direction or another. And more than that, it is monetary policy, or relative shifts and differences in policy between one regime and another, that controls the differential and therefore the currency’s trading. 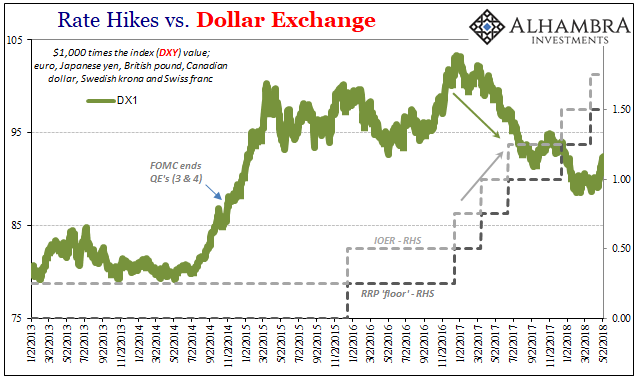 The FOMC voted to fully taper and terminate QE’s 3 and 4 (there were four, not three) at the end of October 2014. The dollar was by then already rising, having attained substantial altitude. It was far out of line with what amounted to a lack of additional reserve creation. QT at that moment was nothing more than the level of bank reserves staying the same (adjusting for other liability side programs such as the foreign RRP and TDF) rather than increasing moving forward.

The dollar was really rising because the market at that point disagreed with the Fed’s assessment for why they should end QE and then think about a further exit.

The Federal Reserve voted on Wednesday to end its bond-buying stimulus program commonly known as QE3 and sent several upbeat signals to markets that it was not worried about global weakness, low inflation or a wobble in financial markets.

Those were risks the markets, in particular funding markets supposedly chock full of liquidity from bank reserves, were not so sanguine about. The dollar rose not because of QT or prospects for it, but because global eurodollar participants (correctly) viewed the economy (no acceleration or recovery) as increasingly hostile to further risk taking (especially EM).

It all shifted toward the end of 2016. At that time, the FOMC after taking much of 2016 off from additional “rate hikes” (after completing just the one during the worst of the global downturn) began to undertake them in more determined fashion. According to conventional theory, that should have been dollar positive. It wasn’t. 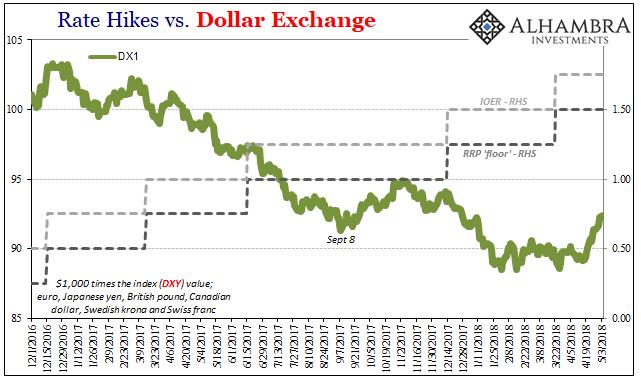 Whether rate hikes alone or in combination with QT, the dollar fell throughout most of last year. But rather than suggest disagreement, as in the “rising dollar” period, it actually proposed a broader if uneasy harmony and consensus. The “falling dollar” was the market increasingly accepting the possibility the economic view the FOMC had been using as the basis for their stepped-up policy exit might prove correct this time.

The last two rate hikes, however, have found a great many markets becoming uneasy about it. It is more reminiscent of late 2014. The FOMC gains confidence about what’s next, but mostly in dismissing increasingly negative data and indications (like 2014) markets are not willing to so easily set aside anymore. We are now more than three months into a countertrend that since April 18 has become more noticeable in that growing uncertainty. 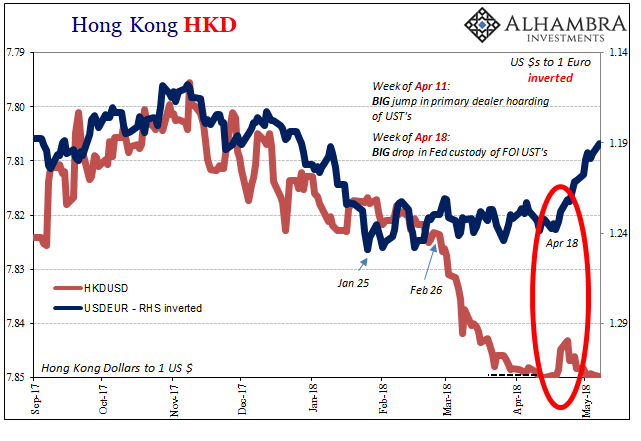 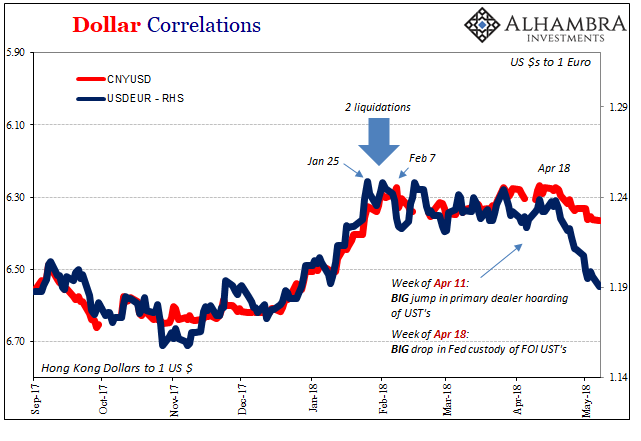 The euro has fallen almost in a straight line since April 18, while the Chinese currency has performed a similar “depreciation.” Just as we could never reconcile QE, there isn’t any reason to believe this is due to QT.

It is now May 2018, and the promised economic acceleration in the US and globally has yet to emerge. It didn’t matter as much last year because narratives so long as they remained plausible were sufficient to turn sentiment in the same direction as policy. But, as I have often written, at some point the boom had to boom.

For policymakers, the economy is doing so right now. That’s a problem for markets because there just isn’t any evidence for it, meaning that yet again policymakers display a stunning, and blatant, disregard for actual data. Rather than reassure unsteady participants, as central bankers tend to want to do, it rings increasingly hollow and foments further negative perceptions.

It’s not exactly an endorsement for following their narrative. Markets are becoming nervous all over again for the lack of confirmation. It is this differential, so to speak, that is driving what is to this point only a partial if deepening dollar reverse.

QT is nothing more than standard central bank monetary (mal)practice. A distraction. 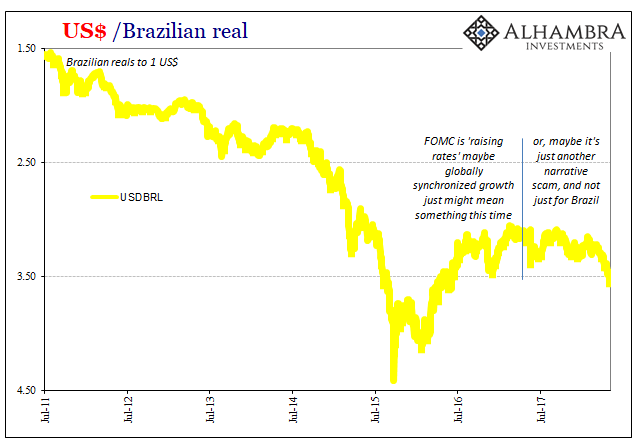