After being rumored and talked about for over a year, at the end of last year the tax cuts were finally delivered. The idea had captured much market attention during that often anxious period of political flirtation. Prices would rise or fall by turn based on whether or not it seemed a realistic possibility.

Public Law #115-97 or An Act to provide for reconciliation pursuant to titles II and V of the concurrent resolution on the budget for fiscal year 2018 amended the Internal Revenue Code of 1986 to among other things reduce the tax rate on almost all of the tax brackets. The income definitions of several of the brackets themselves were also edited. Colloquially known as the Tax Cuts and Jobs Act of 2017 (TCJA), it was widely celebrated by economists (factoring partisan affiliation).

The White House predictably lauded its passage and has since produced a vanilla, vague list of what administration Economists expect from it. It “will help spur more business growth and job creation, benefiting American workers.” There isn’t a tax or economic package that isn’t described in exactly this way by any administration of whatever party in history.

Economists at JP Morgan were a little more specific. They were, as you would expect, equally enthusiastic about the law. In early January 2018, they claimed:

The cuts for individuals are set to expire in 2025, making their long-term impact uncertain. But in the near term, a windfall for households could translate into a consumer spending surge. Since the consumer sector comprises approximately two-thirds of the US economy, more money in the hands of individuals is likely to spur further growth.

Four months of data is certainly not conclusive on the matter, but it’s enough of a start to start questioning these expectations. The Census Bureau’s Retail Sales estimates for April 2018 were comprehensively ugly (again). Year-over-year, total Retail Sales rose by just 3.8% unadjusted. That’s way too close to the 3% recession level that US consumers aren’t able to push away from.

SIDE NOTE: annual benchmark revisions to retail sales will be released separately on May 25. There are a couple of interesting and intriguing changes, including a new sample universe that is supposed to more completely incorporate the results of the last Economic Census (2012, not 2017; the latter will not begin affecting economic stats until September 2019 at the earliest). 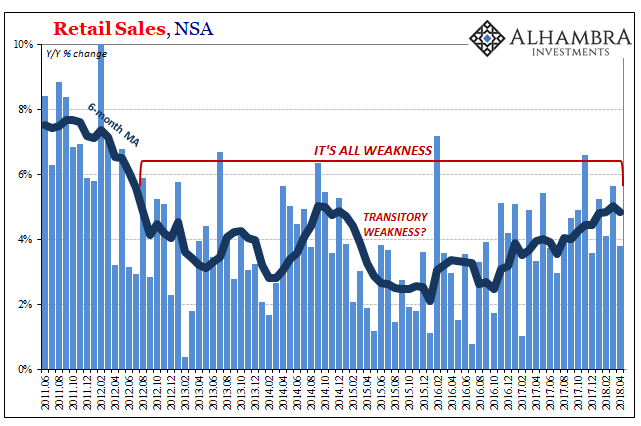 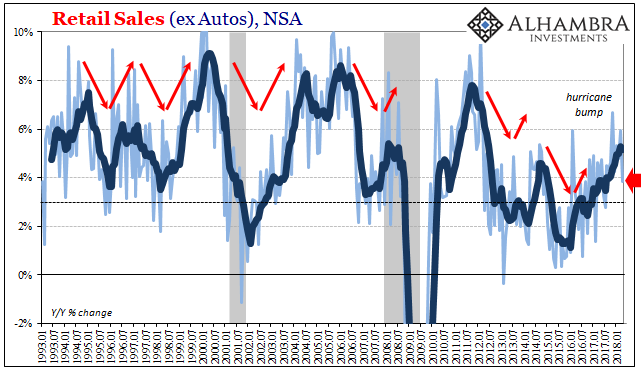 That growth rate includes all of the outsized, positive spending effects of the aftermath from hurricanes Harvey and Irma. Looking at them on a seasonally-adjusted basis, Retail Sales have clearly slowed once more now that those distortions have completely passed. 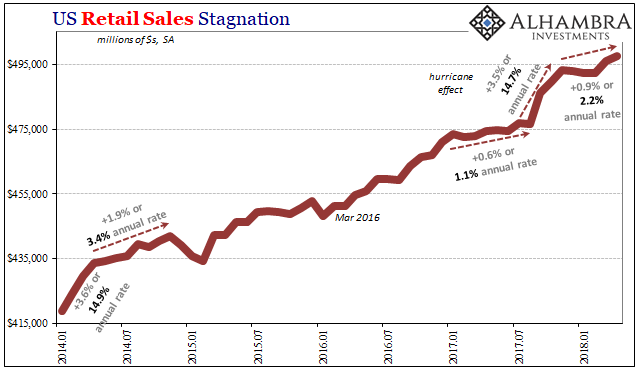 Over the last five months, including December 2017, retail sales have increased by less than 1%. Four of those months fall under the new tax and withholding schedules of the TCJA. The Tax Policy Center, a joint venture between the Urban Institute and Brookings Institution, estimated in March that these alterations would save the average American worker $1,260 this year. 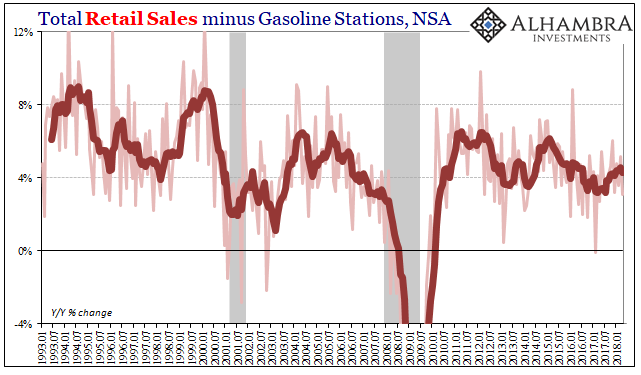 It’s a debatable figure, of course, but in the grand scheme of things it is splitting hairs. American workers will save money this year on taxes, and that is a good thing. Whether or not it is enough, or even could be enough, to break out of the current economic stagnation is the only question that matters.

Tax cuts while they dazzle in econometric models as a rule fall far short in practice. As noted before, the economic problems facing the US economy are incomprehensively enormous. Perhaps it’s the scale of the debacle that makes it so hard to honestly assess. It doesn’t seem possible, to the point of paralyzing incredulity, therefore the utterly conventional is all that is ever offered to what is clearly a paradigm alteration. 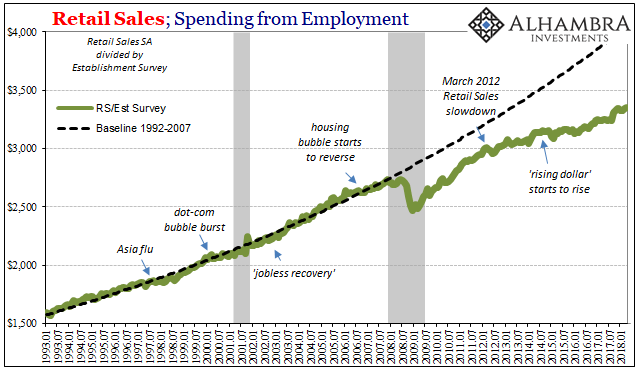 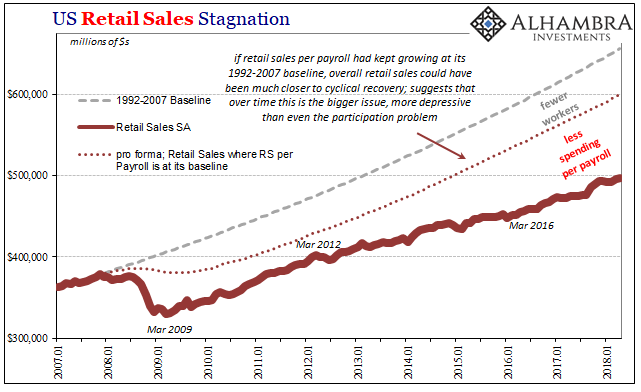 In just consumer spending, we have the dual deficiency of fewer workers working and then what workers are fortunate enough to maintain employment they spend much less as a proportion of what they make. As an economic concept, the TCJA isn’t even a drop in the bucket.

We should not be at all surprised, then, that retail sales so far in the initial period fail to register even a slight uptick. There are numerous other factors to consider, but like QE tax reform in its entirety (more than just changes to individual taxes) was supposed to be the “big thing” that provoked the sharp upward economic response. The economy needs to be jolted back to life, but this thoroughly conventional offering was never going to be even close to a sufficient force (hysteresis).

To begin with, look at this chart: 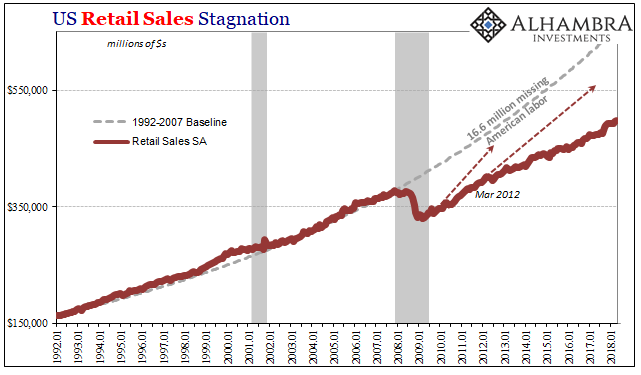 This is a truly out of the box, unconventional problem. QE was believed to be an exceptional solution and it was – if only in terms of current monetary policy thinking. It was an unconventional inside the box answer. As the economic problem is radical, the economic solution must be, too.

In a spot of irony, Harvey and Irma practically demonstrated this very condition. It was massive destruction on a broad scale that finally jolted US consumers to life, if only briefly before the costs of broken windows started to add up. Compared to that, these tax cuts shouldn’t even register. So far, they haven’t. 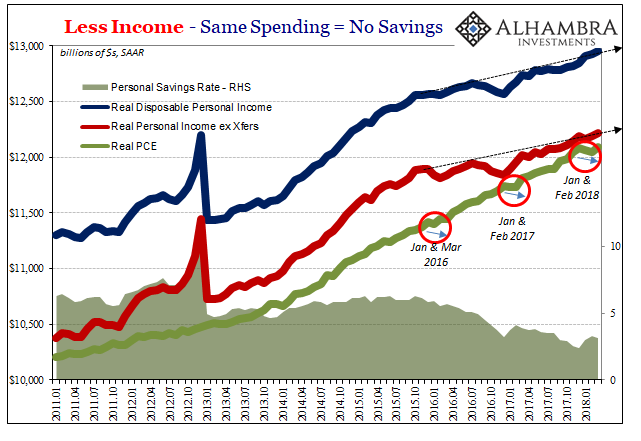