On June 21, 2017, Italy’s Parliament approved Law #96. The new regulation altered Law #130 of 1999. Pertaining to limitations on the activities of Special Purpose Vehicles (SPV), the 2017 amendment expanded their scope. The intention was clear; SPV’s were going to be used as the primary method of cleaning up Italian banks as a conduit for the country’s mountain of bad debts and non-performing loans (NPL).

Less than a month later, the sales team at the accounting firm PwC (what used to be known as PricewaterhouseCoopers) actually and intentionally described Italy’s NPL problem as the “place to be.”

The Italian NPL market is now definitively “The Place To Be”, due to the volumes of NPL, the highest in Europe yet (€324bn of GBV at the end of 2016) and the recent trends in the Italian NPL arena. Ailing banks are going through a restructuring process, significant banks are engaged in massive NPL deleverage plans, overall the NPL management is passing through a prominent overhaul under new ECB guidelines and the NPL servicers are experiencing a deep evolution and facing consolidation manoeuvres.

Those who live in Italy, this “place to be” is only pain from the past and a great deal still left for the future. For well-capitalized individual firms loaded with spare capacity, picking through the bones of Italy’s desperate bank sector is a necessary profit opportunity. This is how it’s supposed to work, the healthy gobbling up what’s left of the profligate and, quite frankly, stupid. The only question to ask is, what took so long?

Economists fear prolonged periods of unsuitable economic conditions because in the past it has led to structural alterations nearly all of them having been unpleasant. Unemployed workers are transformed, for one example, into unemployable workers. Though economists hold monetary policy as neutral in the long run, the same can be witnessed (starting with Japan) of banks stuck in monetary uncertainty and chronic dysfunction.

At some point, they stop acting like banks and head in direct line toward zombie status. That was true for Italy almost immediately during the 2008 panic. Italian banks just stopped lending altogether; it is stunningly remarkable to witness the trend for Italian loans over the space of just about an entire decade, to see it as an almost perfect straight line recalls only the unnaturalness of it. 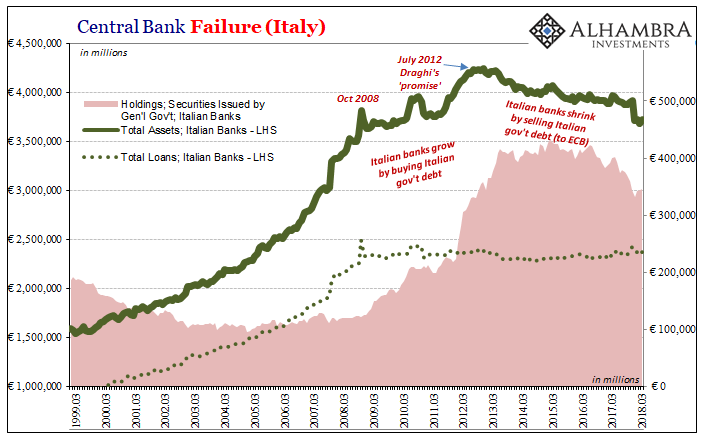 The first stage of zombification was straight up liquidity preferences. Italian banks didn’t stop expanding the size of their overall balance sheet, it’s more that they did so by buying as much Italian government (almost all central government) debt as they could. It wasn’t just a matter of safety in terms of perceived credit risk, the overriding problem was liquidity risk (collateral required in both repo as well as the ECB’s ever-expanding funding windows).

Draghi’s July 2012 “promise” seen in this light becomes something other than what has been described. In short, Italy’s banks jumped out of the frying pan of stupidity (bad loans revealed as really bad in 2008) and into the official fire (PIIGS, of which one or the other middle “I” standing for Italy). 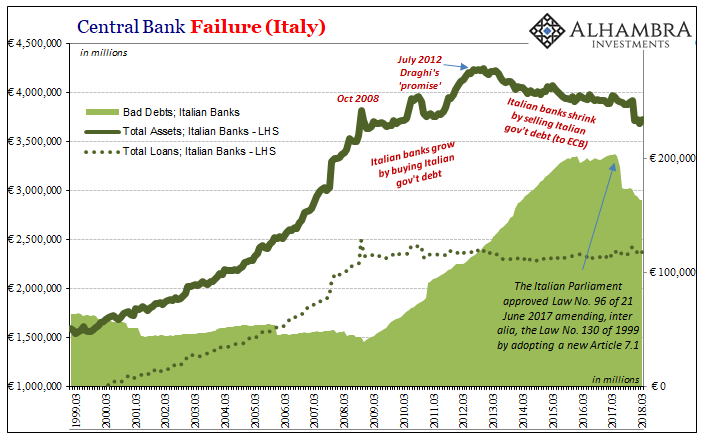 By the time Italian authorities last year finally authorized the “bad bank” option, Italian banks had accumulated €200 billion of bad debts. And I’m only including those loans that have already been reported as soured, there is another ~€120 billion of NPL’s that can be easily classified as unlikely to ever be paid off.

What did Draghi’s promise actually accomplish? For one, it’s not just the zombie banks but also what those zombies did to the Italian economy. While the ECB was buying up sovereign debt (in separate episodes, the PSPP, or QE, being only the latest non-sterilized scheme) Italy’s economy did only appear to stabilize. PR is not nothing for central bankers, but it is ultimately useless for Italians.

Real GDP is growing again, and has been positive for fifteen consecutive quarters, just shy of four years. There was even some acceleration indicated during this latest “reflation.” 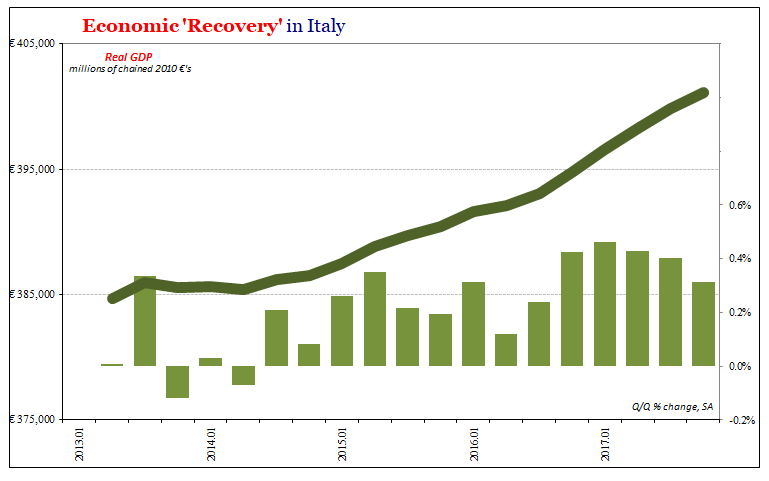 And yet, Italians opted for a radical change in their government as a result of Parliamentary elections held earlier this year. An entirely populist government has engendered almost total mainstream condemnation. 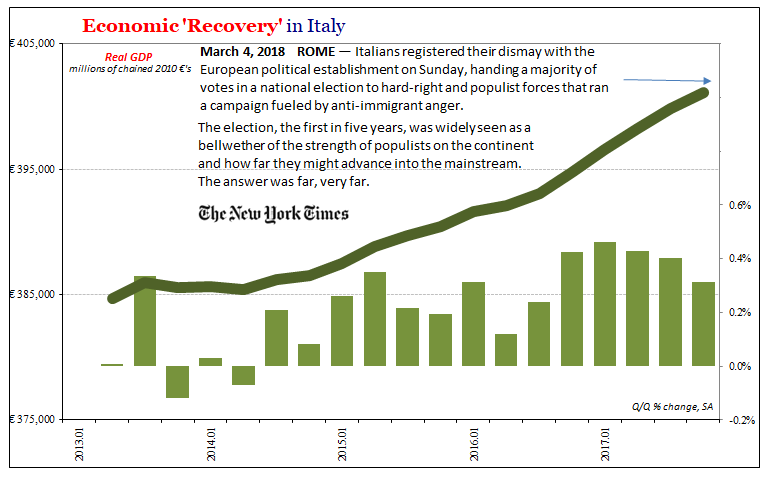 None of the mainstream commentary takes any note whatsoever of what’s really been going on in Italy. These stories are (often purposefully) stripped of the necessary economic and financial context to de-legitimize anti-establishment opposition.

Italy’s new government, likely to be formally confirmed within the next few days, sets a perilous precedent for Brussels: it marks the first time a founding member of the EU has been led by populist, anti-EU forces.

Might not Italians have some very good reason for being upset with the EU? The political experiment was once wildly popular in Italy. The Italian economy had always been an underperformer among the rest of Europe, North and South. It enjoyed, however, some measure of sustained growth and success – but only until October 2008.

Since, the Italians have witnessed one hackneyed scheme after another, none of them whether domestic or originating in Brussels having so much as a measurable impact on Italy’s truly dire economic situation. Over the past few years, they have even been subjected to constant claims of a European recovery, even a complete renaissance. And they might wonder if that’s true, why haven’t most Italians felt it? 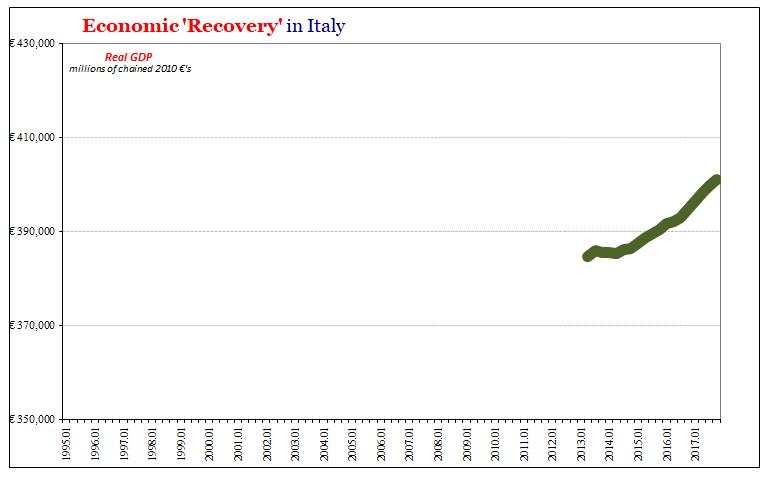 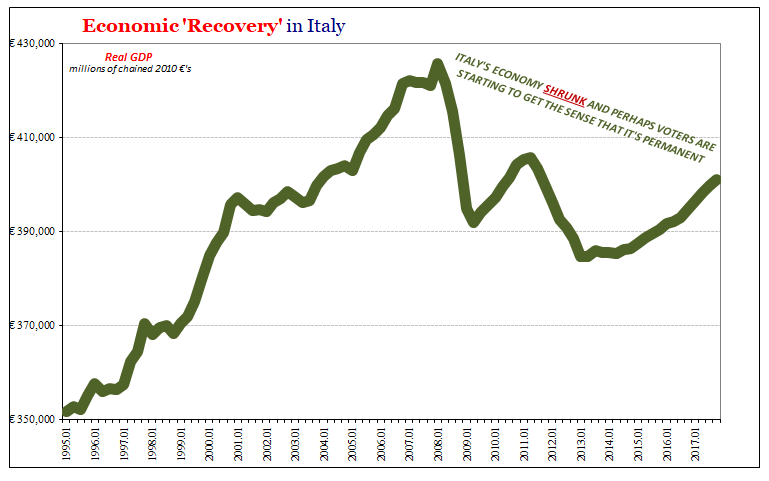 The disdain only continues, however, and it is entirely unhelpful for much beyond Italy’s borders. This weekend it was announced that an obscure formerly leftist lawyer has been named Italy’s next leader (awaiting approval of Italy’s President, Sergio Mattarella). Giuseppe Conte was apparently the compromise candidate most palatable to the League (dominating the North of Italy) and M5S (South).

In Brussels, Conte’s nomination to be PM was met with puzzlement. “Nobody knows who he is and he is not even a high-profile academic,” said one EU official, noting that even Italians had been joking that the man who could be their next prime minister was less well-known than his namesake, the Chelsea FC manager Antonio Conte.

Authorities have bungled, mismanaged, and ultimately failed in their most sacred duties; responsibilities that were largely self-appointed from the moment BNP’s money market funds suspended NAV calculations on August 9, 2007. But the media isn’t allowed to write that, how it might upset or even obliterate the technocratic dream. Monetary policy in particular is to this day described as successful if not comprehensively so. Europe is booming, even when it isn’t even close.

A novice, populist politician in charge of Europe’s third largest economy isn’t some far-fetched dystopian nightmare. The nightmare has been the last decade under the thumb of the thoroughly and irredeemably conventional. Why not try something very different, something possibly less corrupted?

What is happening in Italy is not unique nor is it really all that far in the extreme. That’s the point. You can dismiss the politics of it, but you can only do so by denying the clear economic reality. So long as this continues, and it doesn’t seem to be abating, rather intensifying in denial, it will (can?) only become more problematic. 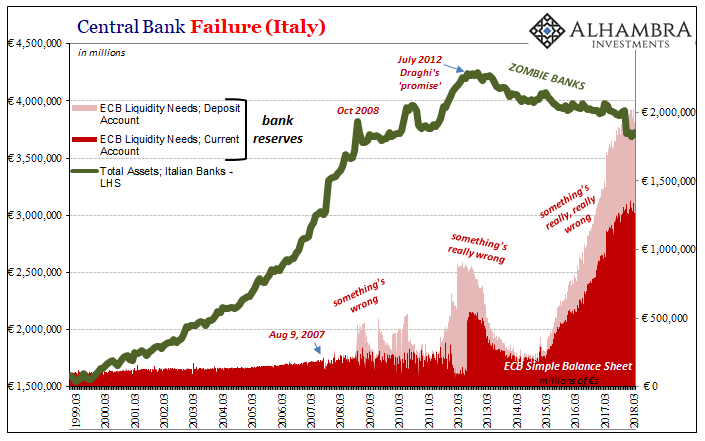