It’s not quite yet on the level of October 15, 2014, but it’s not really that far off, either. What made the prior episode three and a half years ago unique was the condensed timeframe, as well as how far UST yields fell. Today has been a far steadier “flight to safety”, meaning the same thing just spread out over the entire session. Collateral.

And it’s worldwide. The UST 10s is as good as any other place to start. The benchmark bond’s yield opened from the Memorial Day holiday down a little more than 5 bps in yield from last Friday’s close. Beginning around 10:40 am ET, over the next two hours it would sink a further 8 bps, pause until just before 2:00 pm ET, and then drop another 6 bps before recovering just a tiny bit at the close.

From Friday, the 10s are more than 16 bps lower in yield. That’s not uncertainty, it’s a collateral call (fear).

More interesting, the specific trigger in the UST selloff appears to be JPY. It was moving higher (bad) from the Asian open last night. Starting off near 109.50, by Europe’s open it was already up to 108.50. JPY had recovered 109 again until around 10:00 am ET when it reversed and moved sharply higher all over. It didn’t quite manage to break back above 108, but it came close toward the end of trading. 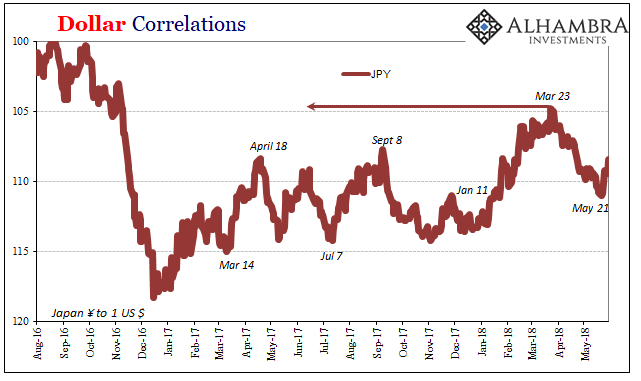 It’s a major reverse from the past few months. During those liquidations in January/February, JPY was on the upswing. From March forward, however, while things were going wrong pretty much everywhere else in the eurodollar’s world, JPY was the one key price that was moving in a favorable direction. It had fallen from a liquidation-type level above 105 all the way to a more BoJ pleasing 111 and less.

To have the yen turnaround and go back, starting last Monday, was a potential warning.

It is not one that suggests Italy. That country in particular may be on everyone’s mind right now if only because that’s where all the most violent market action is taking place. Not only that, this growing “contagion” fits all the preferred narratives about the politics of populism (dangerous).

What is truly telling is just how quickly everything changed. That’s not Italy, that’s the fragility of this whole narrative from inflation hysteria to this boom that never was. There is no better example of it right now than Germany’s debt markets.

Far more than UST’s, German bunds, schaetzes, and bobl’s have erased almost a year and a half of “reflation” in only two weeks. Poof, like that it’s gone. 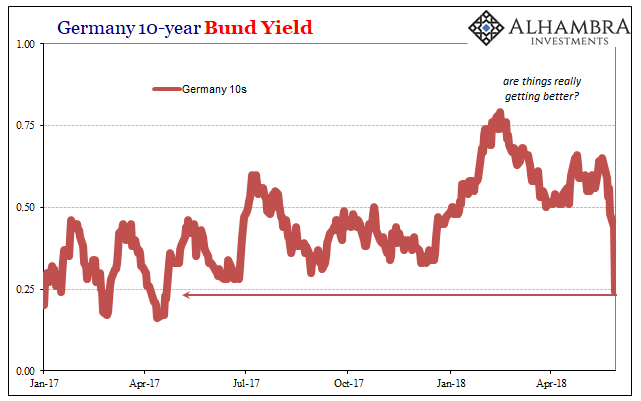 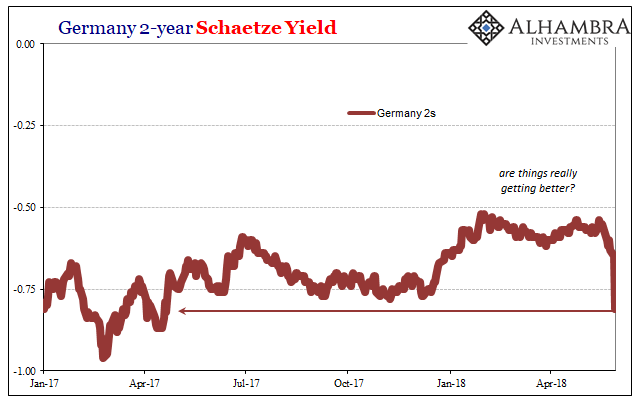 One reason for this obvious fragility is, as we noted last week, Europe’s “recovery” was little more than rhetorical. This has been building for several months, not a few days since Italy’s President sparked an unprecedented crisis (for modern Italy). Going all the way back to January, what little economic momentum there had been had all but vanished in those earlier worldwide liquidations.

Italy is merely another reminder that nothing has changed, and in all likelihood nothing will. Being left in this wretched state is only pure risk. They can gloss over it on occasion, as they have from time to time (2010, 2013-14, 2017), but markets including those in Germany haven’t really been fooled. Bund yields though better than last year were still even at their reflation best this year nearer to record lows than even low levels at the last cycle in 2014.

In other words, financial and monetary participants appear to have been looking for an excuse to pull out; any excuse. They never went all that far in, which is why in a matter of days it has all gone up in smoke.

The real one to look out for, however, is only tangential to the European fireworks. The euro is being dragged lower and lower which again will be laid at the doorstep of Italy’s elected populist government. Instead, we must keep in mind it was European banks who appeared to have stepped up in 2017 in Japan’s increasing eurodollar absence. German bund yields tell us that these very banks may not be so enamored with the story that led them in that direction at that time. 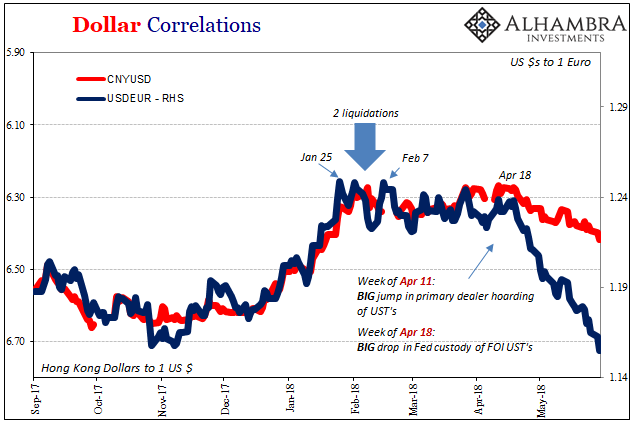 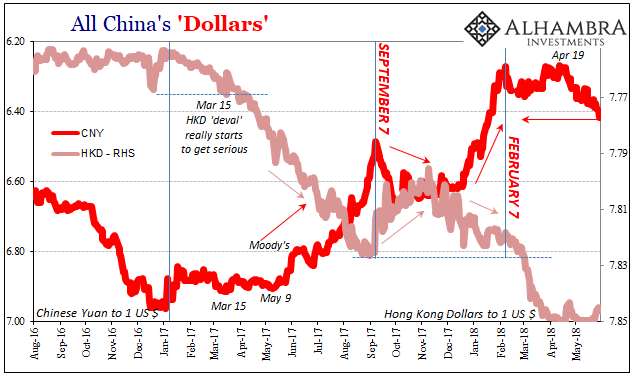 Of all the currencies now moving the wrong way, including JPY, it’s CNY that should be at the top of every watchlist. After all, it was around May 15 that it started to drop and as of trading today it’s back below 6.40 for the first time since January. More than that, it’s been falling going back to April 19 – six weeks all moving lower is a bad sign.

That’s pretty much where we are today.