Back a few months ago when Europe was booming, or at least everyone was sure that this one particular economy was, market futures prices indicated an expectation for the first European rate hike to take place by Q2 2019. That was consistent with the US Federal Reserve’s experience as well as how the mainstream narrative had developed especially over the final months of 2017. Europe’s solid improvement, it was believed, would mean universal policy success and therefore another orderly transition this time by the ECB.

Mario Draghi threw a big wrench into those dreams yesterday. The ECB’s models now believe that rate hikes likely won’t be appropriate until the end of next year, not the middle. That half year delay, in conventional terms, has meant the central bank policy is being characterized as “dovish.”

With the Fed further committed to “hiking” and Europe’s authorities more squeamish, this shift was presumed to be hugely dollar positive. As such, the euro fell yesterday against the dollar, its worst single day slide in two years.

That’s not really what happened, of course. It just so happens to be consistent, for once, with how these things are perceived by most.

Europe’s economy seems to have hit a wall. Yesterday’s maneuvers merely solidified those worries. If the central bank has grown visibly more cautious, and central bankers by rigid doctrine are the most optimistic forecasters on the block, then it indicates there really is something to these growing economic concerns.

Part of this negative reassessment is driven by the ECB itself, or rather the ECB’s pretty clear lack of conviction. What I mean by that can be found in the history of its economic projections. 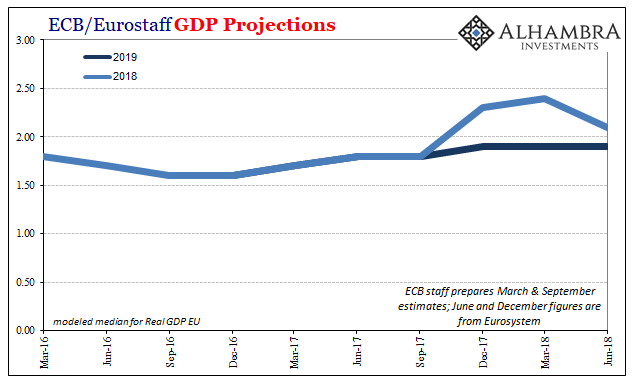 Despite all the hoopla over QE and the constant drumbeat of public confidence about how it can only succeed, European authorities’ projections for Europe’s economy this year weren’t raised until the end of last year long after the so-called boom had shown up in broad economic figures. In short, these estimates were reacting to what had already happened and merely extrapolating from there. That would propose the models don’t really know how or why the economy picked up in the first place (though Economists and policymakers will always attribute it to QE and related policies). 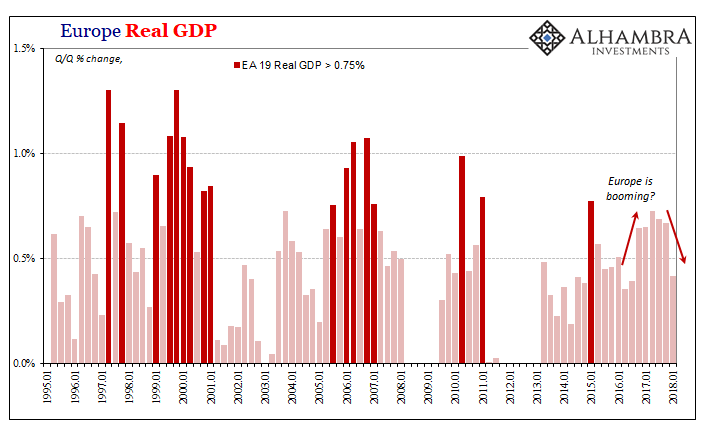 Economic projections were raised again in March when it was presumed “rate hikes” were only a bit more than a year out. In between, a lot has changed. As such, the new ECB projections, the very numbers that have come out as now more “dovishness”, are dropping back toward where they were to begin with.

It confirms that the models didn’t know why GDP had improved, and therefore can’t really tell if that improvement is robust and sustainable nor distinguish when or how it might just disappear (yet again). It’s hardly the stuff of confidence. Thus, yesterday’s gross shift in tone. 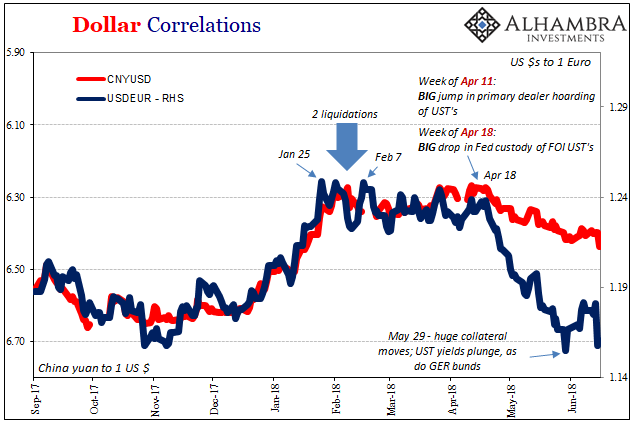 In very broad and general terms, that’s what the dollar and by consequence most of the rest of the world’s currencies have moved on. The “weak dollar” of reflation and globally synchronized growth was banks extending dollar funding (and financial entities buying up Eurobonds by the handfuls) on the expectation of opportunity and the lower perceived risks to those prospects.

Those beliefs were challenged later last year (especially to European banks) and then in concrete fashion throughout the first half of this year. The ECB’s actions lately are, again, in line with the ongoing review and, since April 18, revision as it relates to global risk/opportunity. This is the renewed “rising dollar”, not projections of interest rate differentials among central bank policy actions that have little grounded basis in anything but their same interpretations that always, always fall short.

It is actions that speak here, or in this case the professed reluctance to act. If the ECB were actually confident it would be moving in a more determined fashion. The same also applies to the Federal Reserve, as noted earlier this week. Jay Powell calls it “uncertainty” but it’s really the same thing as in Europe and the ECB’s models. If globally synchronized growth were real then the Fed and ECB would be racing each other toward complete exit, not half throttle wondering what’s up with federal funds and Italy.

Now, instead, enough time has passed that any meaningful global acceleration would have shown up long before now. Markets are merely thinking the same way, and continuing to act as these concerns continue to pile up and central bankers (further) admit to seeing them, too. 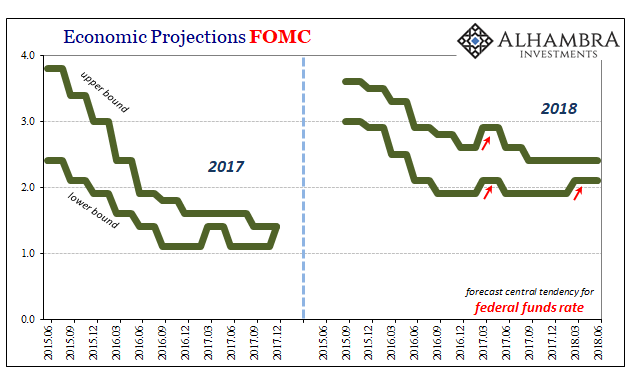