The Simple Economics of What Really Matters

The Simple Economics of What Really Matters

The very idea of a labor shortage is supposed to be strictly an economic concept. No longer. It is now wielded almost exclusively in political terms. Anecdotes about how companies are unable to find workers pepper most commentary on the labor market if only because there is no (none) direct statistical evidence that a nationwide labor problem exists.

In the absence of such data, a plethora of reports on how individual businesses are creatively dealing with the presumed problem is constantly offered as a sort of backup. If there was an actual shortage, no creativity would be required. There is nothing particularly clever about offering more money to workers, both to keep those you have on staff already as well as to bring in new ones if you need them so badly.

It actually argues against the idea.

The other angle for the LABOR SHORTAGE!!! is within the immigration debate. I don’t particularly wish to get into it at any time, but the inadvertent honesty being offered in this one specific instance is particularly noteworthy; this time in the form of a mainstream story about a California citrus and avocado farmer.

Shade will need 50 harvesters for peak season. Right now, he has 25. He’s tried to hire more, but a skilled crew is becoming harder to find: The workforce he’s relied on is aging and he’s having a hard time finding people to replace them.

Even though he pays well above minimum wage, he’s also lost workers to farms that can afford to pay more. The experienced harvesters at Shade’s farm can make up to $400 a day, he says. The rookies start off at minimum wage and then move up to $200 to $300 a day after a few weeks.

The article’s author makes a mistake by composing his thesis from the comparison between what Mr. Shade pays versus the minimum wage. He pays a lot more than the bare minimum therefore we aren’t supposed to imagine why he’s having problems other than the image of labor scarcity.

That’s nothing more than a false equivalence, however, and ends up proving the opposite point. The correct economic (small “e”) notation is between what everyone else pays versus what Mr. Shade is apparently unable to. The question is never “does he pay a lot?”, rather it is always “does he pay enough?” If he was to increase wage rates, shortage solved.

Thus, it’s not a labor shortage. Economic illiteracy is rampant.  As detailed here, these are strict economic concepts the consequences of which are entirely straightforward. 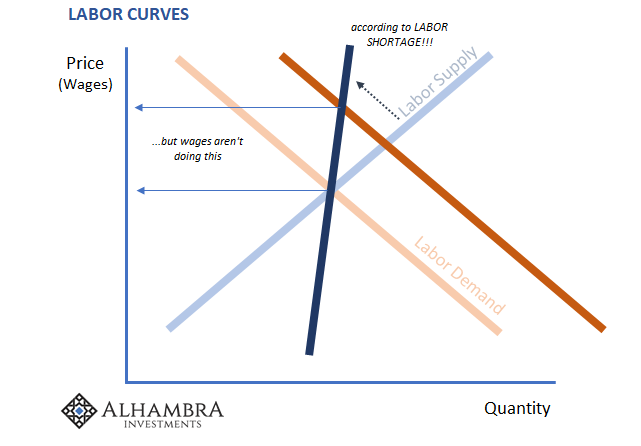 If this one farmer is struggling because he can’t afford to pay the market clearing rate for workers, then that’s a big problem for this one business given its negative proposition towards his own viability. If economy-wide businesses complain about a scarcity of workers but aren’t willing to pay more for any of them, then that’s a macro problem indicating a very different set of circumstances than 3.8% unemployment (shown above).

This stuff matters because even though it is generally believed the US economy is booming right now, that’s almost exclusively by virtue of the unemployment rate. Therefore, if the unemployment rate is disqualified by lack of wage growth, and the labor shortage by extension, the boom simply disappears.

And if the boom disappears, then we are in the same boat as the BoJ is on Japanese inflation, and Banco do Brasil on the question of backdoor swaps versus reserves. It may not seem like it, but all of those things are closely related. If the labor shortage is similarly imaginary, then once more it is shown just how they really don’t know what they are doing, as well as why; “they” in this case meaning nearly all economic commentary and mainstream interpretation of conditions. Adding one more place, the US this time, to the growing list where that applies is devastating to 2017’s reflation/globally synchronized growth expectations.

If the first chart above ends up being proven correct and the economy doing so well we’ve run out of workers, then we’ve got a realistic chance to grow out of this malaise and into something meaningfully better. If the second is instead, a lot of things are going to be marked down. A lot already has, starting with inflation hysteria.