EFF Watch, Or Is It IOER Watch?

EFF Watch, Or Is It IOER Watch?

How bereft of ideas might they have to be to fall back on IOER? It’s scandalous, really. But the Federal Reserve in terms of intellectual property belongs on the TV program Hoarders. They never throw anything away, so attached do they become to whatever ineffective idea implemented at any time. Practical experience is in their practice impractical evidence.

It’s all binary interpretation at this point; everything works, or nothing does.

I can only imagine how the conversation might have gone:

Empty Suit #1.  Hey, federal funds effective has been moving toward the upper range of our target band. Anyone got a theory?

Peripheral Staff Member Somewhat Versed In Modern Money Mechanics.   But wouldn’t the increased issuance actually help, especially in the repo market where additional bill supply could offset some of the increase in fails we’ve seen this year?

Empty Suit #1.  So, what do we do about federal funds?

Empty Suit #3.  Yeah, but back then we thought it was a floor.

When you fight not just for statutory approval for something like IOER, an action that breaks with all prior monetary precedent, and then argue vehemently during the depths of a once-in-four-generations panic to move up that approval, IOER just isn’t going to go away no matter how blatantly futile its use. They’ll find some way to employ it until decades from now it can be quietly retired, absorbed, or renamed.

In other words, IOER has a future probably like the Discount Rate. Once the very lever of old school US central banking, the Discount Rate was in January 2003 unceremoniously transformed into, altogether now, a ceiling.

The idea was to create a monetary corridor for money market rates. The Primary Credit rate at a premium would act as a ceiling in several respects. First, the shift to something other than the Discount Window was intended to end the stigma associated with it that had been developed during the period where it was highly discouraged in favor of federal funds. The rule change to primary credit (why it is called primary credit) removed the restriction against relending any federal funds borrowed there. Prior, any bank borrowing at the traditional Discount Window was prohibited from further distributing those funds; again, last resort.

Because Primary Credit was believed to have cleansed the stigma of the Discount Rate coupled with the ability to relend, theoretically (and academically) it was expected that if money market rates rose above the Primary Credit “ceiling” other healthy banks would then borrow at the formerly Discount Window and relend those funds back into the market as an arbitrage of flow (acknowledging that the federal funds effective rate itself is not really a singular price but an attempt to aggregate and average many trades). Paired with the federal funds target (the policy rate), the new Primary Credit (and Secondary Credit) was meant to define a hard corridor for money market rates. Fragmentation was believed as a remote problem defined instead by these policy arb opportunities. 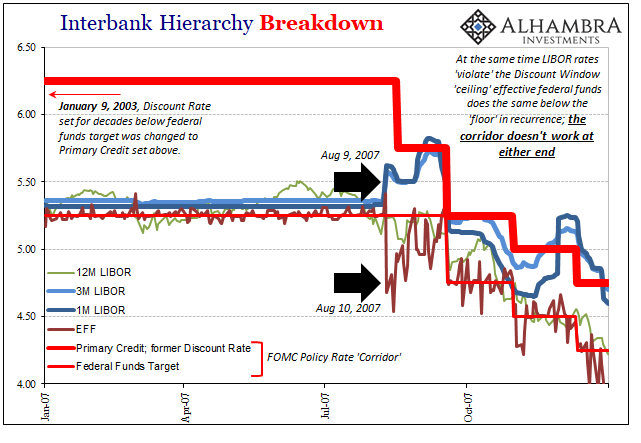 Unsurprisingly, it didn’t work out that way, either. Bank reserves are way, way to the back of the modern wholesale spectrum, not the front.

Federal funds watch, updated for Thursday, June 21: EFF even at 1.92%; the only change was the 25th percentile moved up 1 bp to 1.91%. IOW, 75% of transactions are taking place inside the formerly steady 5 bps spread to IOER. 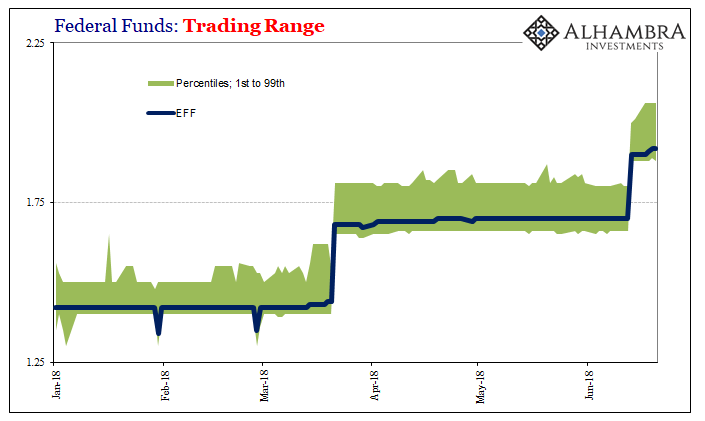 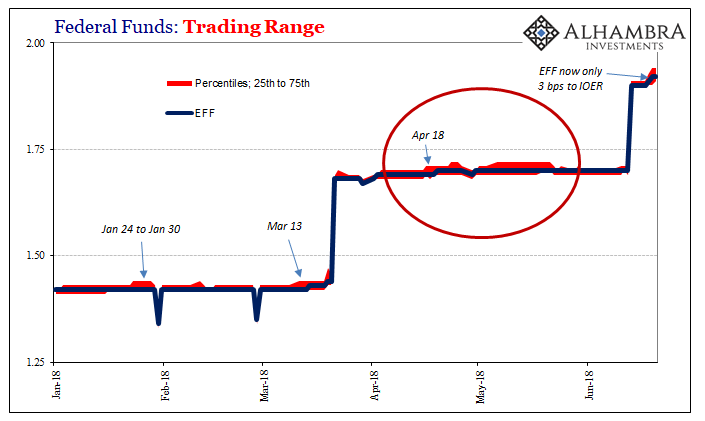