The Money of Metals; More Gold Beyond Repo

The Money of Metals; More Gold Beyond Repo

In all honesty, I do mean to beat this one particular dead horse. In fact, I intend to pulverize it until there is nothing left but the smallest particulate matter. This is everything that is wrong with how things are right now. Either they are willing to put out what could only be legitimately classified as outright propaganda (lies), or they are so thoroughly incompetent they don’t know what else to say.

Those are the only two choices. I’m not sure right now which option would be worse.

Bloomberg (where else?) dutifully outlines (from June 15) the deceased equine in question:

As Treasury Secretary Steven Mnuchin increases issuance to plug swelling budget deficits, the department’s choice of maturities has had some unintended consequences. America’s fiscal stewards have chosen to lean short, ramping up sales of bills and short-dated notes. The approach has created distortions in funding markets that have curbed the Fed’s ability to control its key rate and influenced the debate over the size of its balance sheet.

We are actually being asked to believe that the fate of the entire global economy just as it is about to take off into a recovery now eleven woeful years in the making rests solely on the market outcome of this one thing: 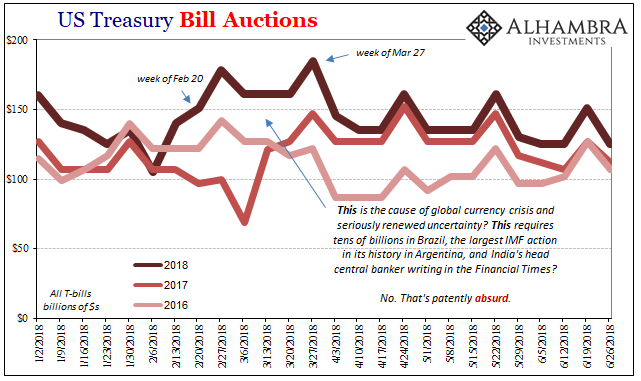 Yeah, no. Either they are lying or they have no other account. It’s an enormous problem whichever way. Both leave the world without any answers, and therefore no solutions.

Eurodollar Event #4 it is.

The reason for so much repetition in these incomplete reflation cycles is that by offering absurd, benign explanations for these serious problems as they regularly appear authorities and “experts” shut off (nearly) all otherwise necessary mainstream investigations toward what might be real answers (eurodollar). No need to look at what might be going on with gold (again), the FOMC says it’s just T-bills. Nothing to see here.

Bloomberg and the rest merely repeat the obvious falsehood because good standing editorial standards demand obedience to credentials; taking no note whatsoever as to data and facts (such as shown above). It’s the realization of what I warned when this theory was first floated earlier this year:

It still is but we have to ask, why even bother to offer it?

Instead, they deliberately throw out this seemingly nondescript reference because it will serve as a de facto official explanation (without appearing to make a big deal out of it) while at the same time they know it will never be challenged. Even though it is, again, demonstrably false, the mainstream media and almost every form of financial commentary is deathly afraid of something like OIS; they don’t understand it, they believe nobody else does, so therefore if the Fed says something about it, then it must be so.

And so history repeats without challenge or detached still further from basic logic and reason.

Gold is peaking toward deflation, as noted earlier today, a textbook monetary case that has over the last eleven years corresponded with these reflation/deflation cycles. The Bank of England custody figures are not the only numbers that line up dead against the crap.

Collateral is an extremely important element to liquidity and modern wholesale money, offshore as well as onshore. And it applies as much beyond simple domestic repo.

The Federal Reserve itself reports weekly on the balance of UST marketable securities in its custody held on behalf of foreign agents, official and otherwise. In other words, we can infer from these holdings what might be going on in offshore collateralized transactions.

Quite simply (oversimplified), if the balance falls by a significant level, we can interpret that decline as likely acute collateral problems out there among foreign entities. While the focus remains on T-bills in the mainstream, these changes line up very well with gold: 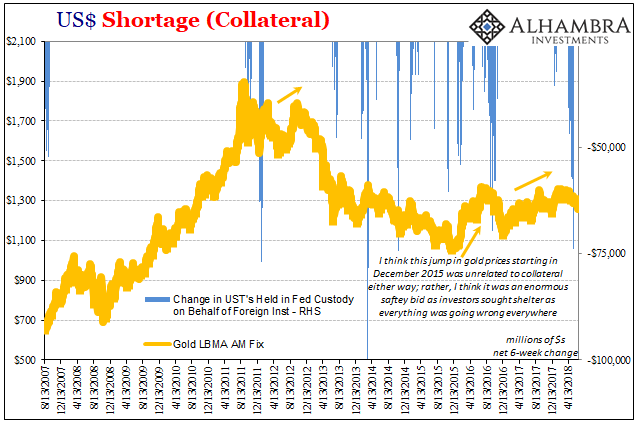 The net result is: tightness in collateral for reasons we can’t know but suspect are, by other data rather than absurd theories, related to balance sheet capacity results in mobilizing gold for those purposes (collateral of last resort); that’s negative for gold prices, therefore gold exhibits the familiar reflation/deflation binary paradigm over time. It’s been a far, far better signal than bank reserves.

There are two exceptions on the chart above. The first is at the far left side, at the start of the data series. In one big coincidence, the Fed began compiling this data at the beginning of July 2007 just prior to the events of that August. The other I’ve noted beside the jump in gold prices starting December 2015.

In both cases, it seems the fear trade or the demand for gold as a hedge against the worst cases (or just central bank error) overwhelmed any deflationary consequences pushed into the gold market by collateral as last resort activities.

By and large, however, the relationship between gold and this view of offshore UST holdings remains relatively consistent. That includes more recent conditions. 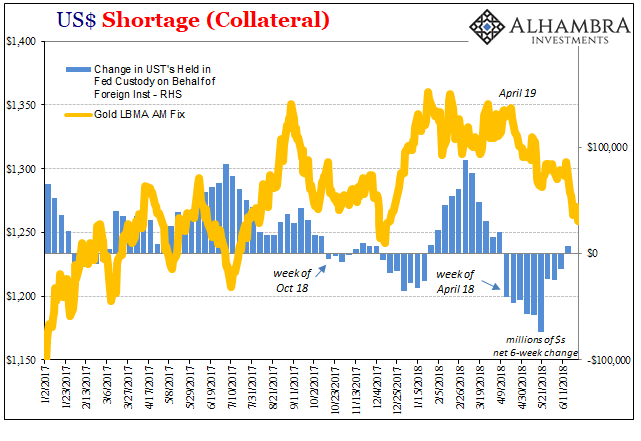 In 2017, while the Fed reported rising custody balances gold prices followed higher (or led, depending on how you wish to perceive these factors). That was the bulk of Reflation #3 uninterrupted by collateral issues. It wasn’t until September 2017 that repo markets erupted in a severe bout of fails that was eventually passed into these foreign spaces (by the week of October 18).

While repo fails have been absent from the latest decline in gold and EM currencies, collateral suspicion is perfectly represented following the week of April 11 (as I’ve mentioned before) – and in offshore or foreign indication.

Unlike what we are asked to believe of T-bills, though these figures are far more compelling than that preposterous idiocy on their own, they are also corroborated by unrelated data showing pretty much the same things; all of which are not new in 2018, rather, as gold, they have shown a consistent history dating back a shamefully long period of time. 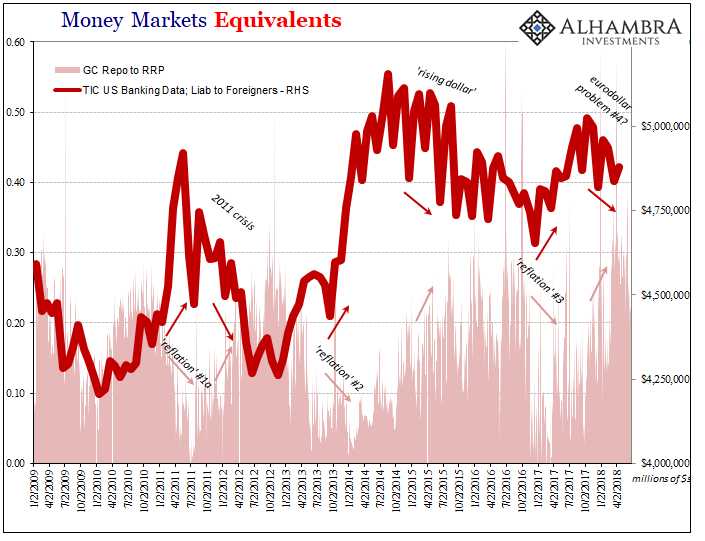 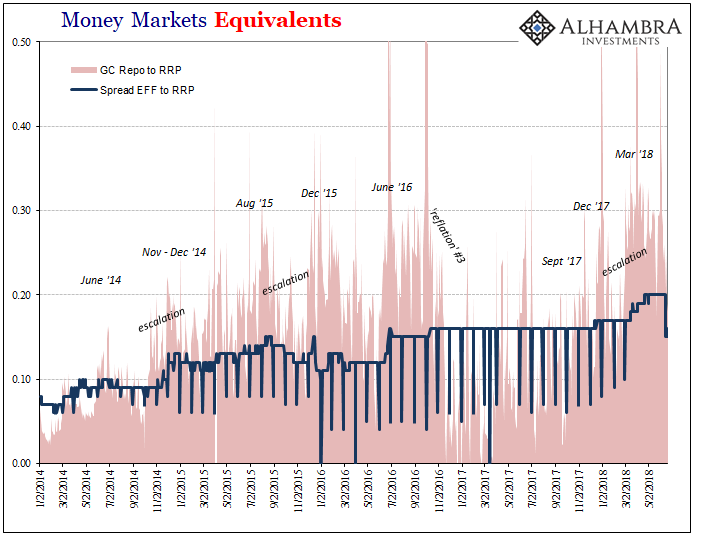 What’s happened so far this year isn’t some different development related to the Fed’s intended exit. It’s the same problem for yet another year. The Federal Reserve’s own figures demonstrate this fact.

One of these times just maybe another shot to the dead horse’s body will get it to finally breathe out the words they really don’t know what they are doing.