It Matters Which Error

It Matters Which Error

We ended last week on a pretty sour note. The eurodollar futures curve has inverted ever so slightly, which isn’t a very good sign of things to come. Since the inversion has to do with different pressures pressing on different parts, convention pays all attention only to the front. It’s there where the Federal Reserve acts out its forecasts.

Because we are conditioned to believe the central bank plays a central role, inversion is widely reported as a market expectation of “policy error.” Briefly, markets expect that the central bank becomes overzealous and tightens too much.

This isn’t quite right, however, an important distinction that has played out several times already in recent decades (conundrums). It isn’t so much policy error as forecast error. That was certainly the case in 2006 and 2007, just as it was in 1999 and 2000 the cycle before.

In one narrow sense, it is no wonder how the dot-com bubble turned to pure mania in 1999. Everything appeared to be aligning in the right direction all at once. From economy to markets, it was for a brief period peak nirvana. Unlike now, the economy was actually booming and markets were expecting it to continue.

The FOMC would make its first “rate hike” on June 30, 1999. Committee members had grown concerned that things were a little too good. In the parlance of the day, they started to lean toward “taking away the punch bowl.”

Because there is no money in monetary policy, central banks operate on a strictly forward basis. Via their interpretation of economic aggregates, they decide when and how conditions might evolve over the near and intermediate term horizons, adjusting the federal funds rate to those expectations.

To begin 1999, official forecasts for inflation (consumer not asset prices) were starting to run hot with the economy.

Eurodollar futures markets initially concurred with those assessments. Though stocks had more than rebounded from the lows around 1997 and the Asian flu, in the first half of 1999 futures markets were not perceiving any dangers. Again, the economy seemed to match perceptions, sky high as they already were. The confluence of trends outside the NASDAQ did appear on the surface extremely favorable. 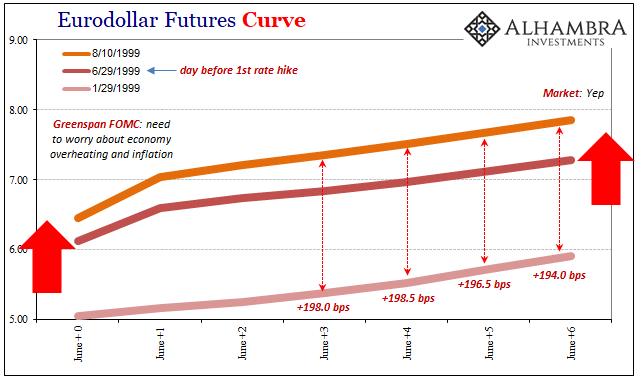 We hear descriptions today of various BOND ROUTS!!!! but the dramatic shift in the first half of ’99 was actually one. It was uniform across the curve, particularly the outer years. Almost half a year before Greenspan started, eurodollar futures were already trading as to how far the Fed would, and could, go.

The good feelings abruptly shifted on August 10, 1999 (what is it about mid-August, specifically the 9th and 10th?) The curve would halt its favorable run and begin to distort, meaning flatten. It would seem in hindsight the market calling for a policy error, but that’s not what it was. 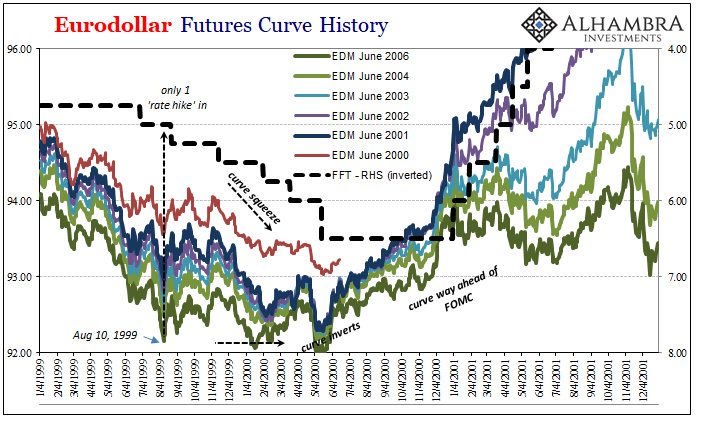 To begin with, by August 10 the “maestro” was only one rate hike in. They had just started, and already the futures market was turning more cautious. Not because the Fed was “tightening” too much, rather the market sensed how blind central bankers were in their trying a forward-looking approach from such a narrow and unsteady intellectual base (what bubbles?) 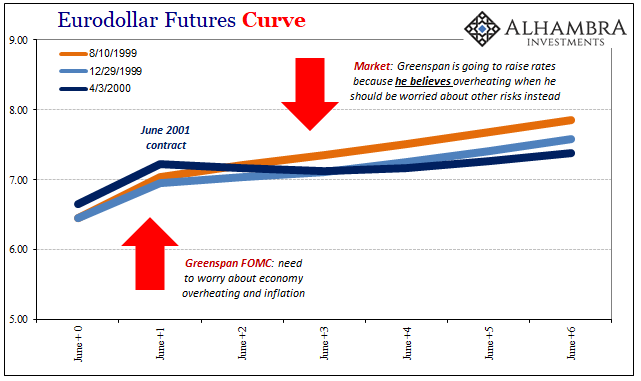 The curve began to twist because participants sensed two very different pressures. Alan Greenspan was going to raise rates no matter what because the Fed always sticks to its forecasts. That was the front end, recognizing the stubbornness of monetary policy officials once they get going in a particular direction. Despite all historical and recent claims to “data dependence” they never are.

As that went on, the intermediate part of the curve began to “disobey” those rate hikes. The eventual and slight inversion evident by the winter months of 2000, especially just after the dot-com stock markets reached their ultimate apex, marked the market’s perceptions that Greenspan was whistling past the graveyard.

The Fed was still “hiking” while eurodollar futures were increasingly betting they would reverse course not of their choice. Nor was it a matter of policy; that wasn’t the issue. Rather, the central bank was raising the federal funds rate without appreciating the true risks to the economy (and markets). They were not in overheating but in how vulnerable it was to the reverse of several late nineties trends including the stock market bubble. 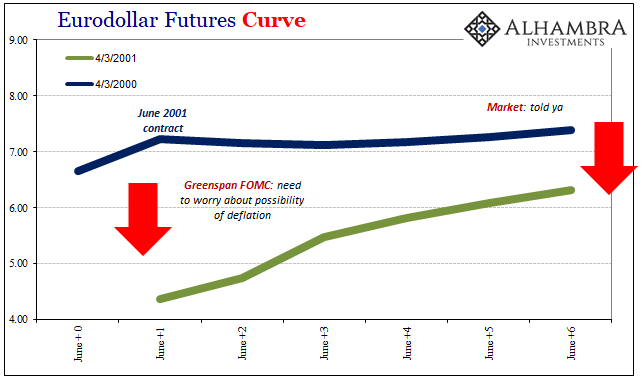 We cannot take the curve literally, either. The June 2001 contract was the bump in the inversion, which might propose the plain expectation that the futures market wasn’t expecting downside risks to materialize before 2002. That’s not how these things work.

Rather, the market was saying that Greenspan was likely to keep going for the foreseeable future on rate hikes, and that there was a non-trivial probability at some point they would halt and reverse. No one could predict when, the appearance of inversion in early 2000 simply forecast a prominent likelihood of forecast error at some unknowable juncture. 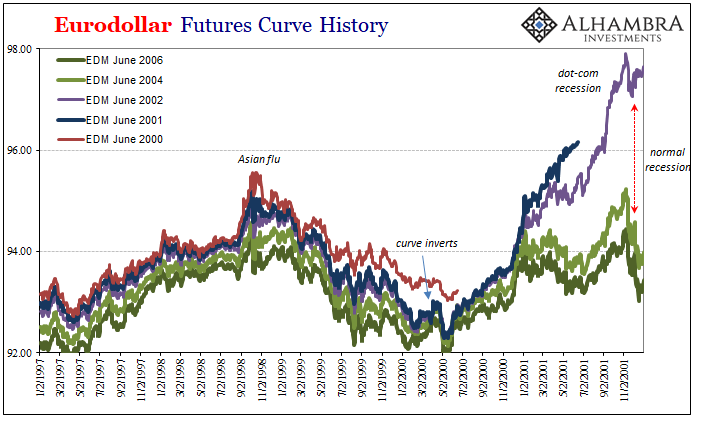 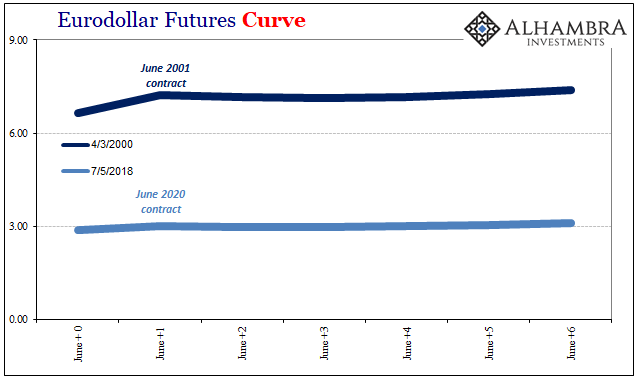 That’s pretty much where we are right now. The current inversion is a bit less but the curve is, frankly, collapsed. The structure of each one is largely the same – forecast error.

And that’s only the beginning of Jerome Powell’s problems. In the first curve inversion, they were widespread and growing worries that a long boom was reaching toward its end. The build up of risks after prolonged prosperity.

The second, on the contrary, tells us there never was any boom nor is there likely to be no matter how many “rate hikes” the current Fed might claim on its future docket. There is as much difference in the distance between those curves as there is in what’s the same in their shapes.

The shape of the current curve is saying the same thing now as it did in early 2000, only at such a diminished nominal level only a central banker could miss the curve’s primary message.

The reason there is so much constant forecast error, especially the last ten years, is that one. That’s why there is no economic growth nor inflation risk as both the eurodollar as well as the UST curves flatten out far closer to zero than normal. They call it R* or the neutral (and natural) interest rate, but all those things describe an economy that just isn’t going to grow and the deepest, most important markets that all believe (eurodollar futures plus UST’s) this isn’t about to change.

The FOMC is forecasting that this could change, but the curve inversion is ripping that prediction all apart. Again. History repeats because everyone still believes these are policy errors. Apart from the tedious influence on the short end, which hasn’t amounted to much, central banks just don’t have that kind of power. They never really did. 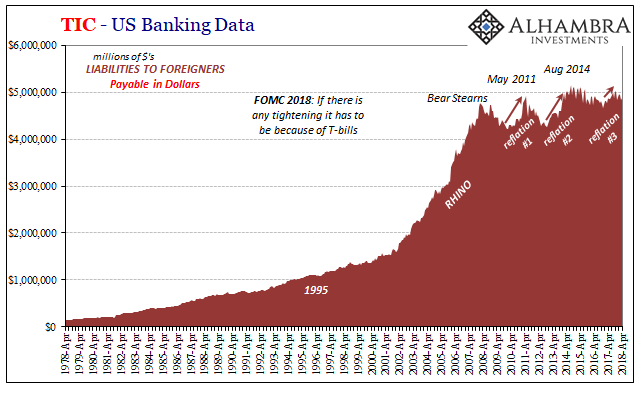