Jerome Powell will make his fourth required appearance of 2018 on Capitol Hill today. The Full Employment and Balanced Growth Act of 1978 required a great many things when it was passed forty years ago, among them a degree of forced monetary competence to be at least displayed publicly by the Federal Reserve. The charade of Congressional testimony is what remains on the books, a semiannual sojourn of kabuki theater playing in each house each time.

The 1978 law, known as Humphrey Hawkins today, more importantly had mandated our central bank calculate, produce, and maintain monetary targets until the year 2000. The year 1978 isn’t accident. The Fed’s total monetary ineptitude was on full display at that time in what we all know as the Great Inflation. Even Congressional politicians blinded by their very political nature could easily understand how unrestrained Economics at a central bank wasn’t leading anywhere good.

By 2000, however, central bankers could no longer define let alone target money supply. The provision in Humphrey Hawkins was allowed to sunset for, as Alan Greenspan noted, “the proliferation of products” being so extreme no human on the planet had any real idea about the money system. They would pretend otherwise, thus the ongoing charade.

It means simply that what Powell will say today is entirely irrelevant and meaningless. Markets may hinge on his every word, but that is only in the short run played up endlessly by a compliant media allowed no other honest alternative explanation. Powerful monetary interests will erase everything he claims, even if unlike many of his predecessors he actually believes in himself.

The most consequential Humphrey-Hawkins of our lifetimes took place exactly ten years ago this week. What made the dramaturgy of July 15, 2008, so momentous was everything not talked about during the testimony. The matter was degraded right at its beginning, devolved to pure farce by all that was wrong with central banks, central bankers, and politicians enthralled to and by both.

Senator Chris Dodd, Chairman of the Senate Committee on Banking, Housing, and Urban Affairs, in his opening statement welcoming Fed Chairman Ben Bernanke as well as Treasury Secretary Paulson and Chairman Cox of the SEC committed a “subprime is contained” moment on par with Bernanke’s given in the same setting a year and four months before.

CHAIRMAN DODD.  In considering the state of our economy and, in particular, the turmoil in recent days, it is important to distinguish between fear and facts. In our markets today, far too many actions are being driven by fear and ignoring crucial facts. One such fact is that Fannie Mae and Freddie Mac have core strengths that are helping them weather the stormy seas of today’s financial markets. They are adequately capitalized. They are able to access the debt markets. They have solid portfolios with relatively few risky subprime mortgages.

The only thing true in that statement was the very last bit; the GSE’s did have solid portfolios with very few subprime mortgages contained within them. Not two months after Senator Dodd lauded their supposedly prudent characteristics they were insolvent anyway, overtaken in government conservatorship.

The presence of the SEC Chairman was noteworthy for what also happened on July 15. The securities regulator would ban the naked short selling of shares not just those belonging to the GSE’s but all primary dealer commercial banks, as well. It was pure mainstream backwardness; selling is always “driven by fear and ignoring crucial facts” in the minds of authorities who would be to blame if crucial facts were proven to be something else.

The period following Bear Stearns’ failure and last-minute merger was much like these reflation episodes we still find today. Things were on the upswing. Even the economy grew again in Q2 2008. This was the essence of Bernanke’s testimony to the Senate that day. Though some lingering problems were still detected, that was to be expected even as cautious optimism spread predicated on the idea that Bear was the worst of it. 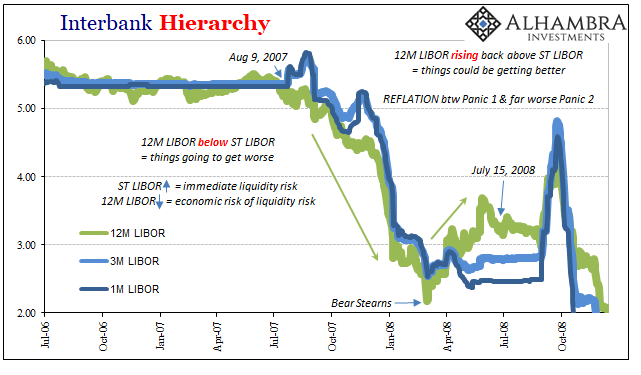 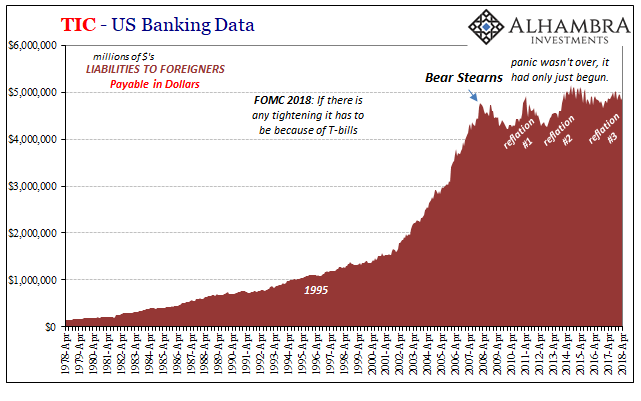 The Panic of 2008 was actually two panics. The first had begun in 2007 deeper in the shadows and kept going until it broke out into the open to claim a Wall Street firm. I wrote on the occasion of the ten-year anniversary of Bear’s demise the significance of its particular demise.

Bear wasn’t some subprime peddler. It was Wall Street.

You might sense a theme developing, and if you do you are even a decade later far ahead of Ben Bernanke and Chris Dodd. The whole panic and crisis and economic breakdown truly had nothing whatsoever to do with subprime. 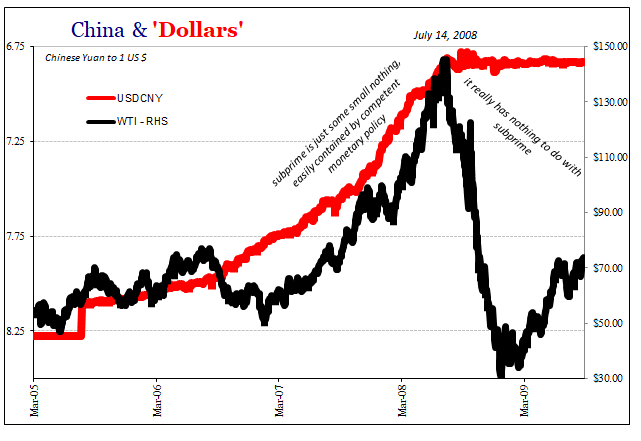 But that is how the official history has been written. It has let global monetary authorities off the hook for stupendous dereliction of duty. Central banks are supposed to be apex technocratic monetary stewards, so how in the world could one panic happen let alone two in 2008?

It was brilliant PR made all the more so given Bernanke had previously said subprime was contained (something he and the rest of the FOMC actually believed in 2007), a declaration that followed him everywhere appropriately like some scarlet letter. The man and the institution were both able to sell the world on this idea anyway, one that in literal terms he got very wrong at the start, so as to be able to sell the world on another lie.

This one he told one year after at the Humphrey Hawkins mockery of July 2009. The official actions taken by everybody not just the Federal Reserve, Bernanke said, “may well have averted the collapse of the global financial system, an event that would have had extremely adverse and protracted consequences for the world economy.” 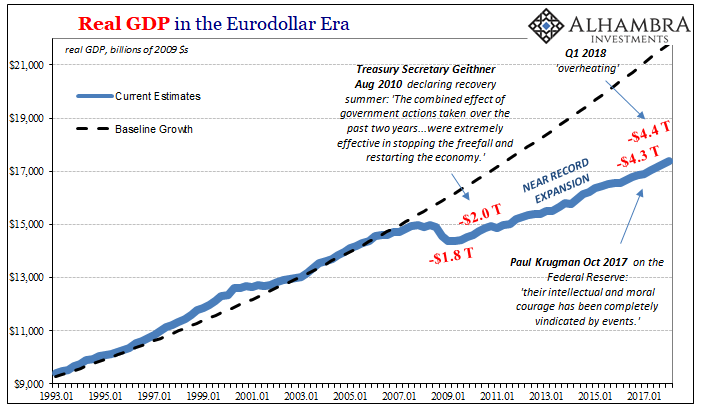 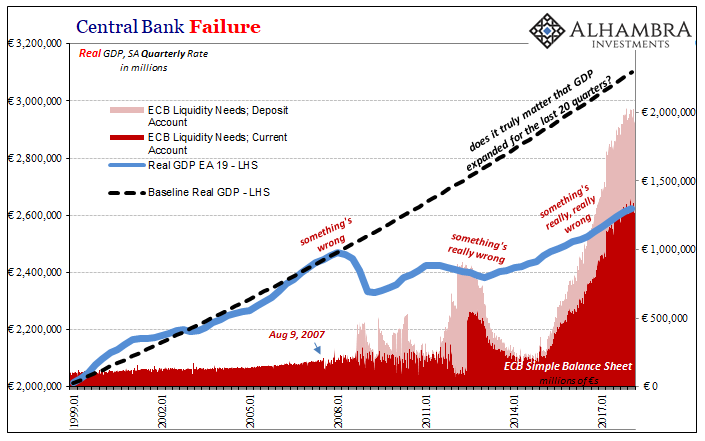 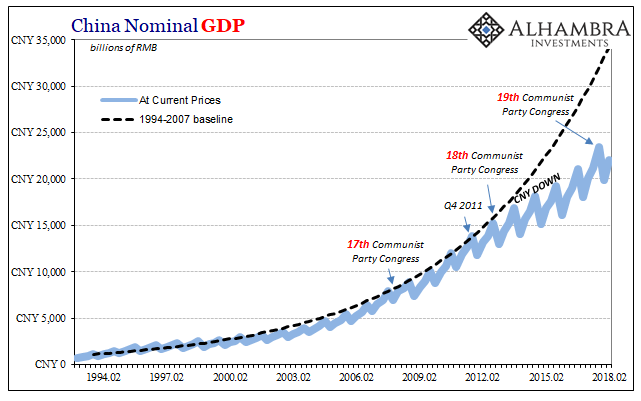 You were not then, and are not now, meant to ask how lil ol’ subprime could have managed to bring the entire global financial system to the brink of collapse. The incongruity is so obvious because it just wasn’t true. If it really was about subprime then that would have meant the Fed failed to stop something so small from becoming so big. They are actually incompetent either way.

Only a monetary event could have produced such nasty and lasting effects, but that would mean the central bank, and all its central bankers, failed and did so spectacularly. Better to claim missing big on something small like subprime than to acknowledge the monumentally terrible, and true, basic facts.

The real insult of 2008 was that the second panic truly began on July 15, 2008. The first one hadn’t really ended; it had like reflation gone dormant for several months smoldering off in the shadows. It wasn’t therefore surprising that they didn’t see the second one coming given how totally unprepared they were for the first.

Maybe it is a fitting portrayal after all. Ten years after the biggest panic wave since the Great Depression began, tiny little nothing subprime still isn’t contained. It’s still their lie, but at least the proportions are right.