You get the impression often that these guys have no idea what drives the dollar. They cling to all sorts of theories, of course, from interest rate differentials to perceptions of economic strength. That seemed to be the case in 2017 and its “weak dollar” environment. Globally synchronized growth would mean potency pretty much everywhere, thus, in this view, a lower dollar exchange value more consistent with the days before Bear Stearns.

The IMF in its World Economic Outlook (WEO) summed up these expectations this past January:

The cyclical upswing underway since mid-2016 has continued to strengthen. Some 120 economies, accounting for three quarters of world GDP, have seen a pickup in growth in year-on-year terms in 2017, the broadest synchronized global growth upsurge since 2010… Key emerging market and developing economies, including Brazil, China, and South Africa, also posted third-quarter growth stronger than the fall forecasts. High-frequency hard data and sentiment indicators point to a continuation of strong momentum in the fourth quarter. World trade has grown strongly in recent months, supported by a pickup in investment, particularly among advanced economies, and increased manufacturing output in Asia in the run up to the launch of new smartphone models.

Just six months later, however, “something” had changed. In its July 2018 WEO, the IMF admitted:

Global growth is projected to reach 3.9 percent in 2018 and 2019, in line with the forecast of the April 2018 World Economic Outlook (WEO), but the expansion is becoming less even, and risks to the outlook are mounting. The rate of expansion appears to have peaked in some major economies and growth has become less synchronized. [emphasis added]

To begin with, 3.9% isn’t all that positive for global GDP expansion. That’s about half of what it would be if there was an actually healthy economy in progress. But that wasn’t really the point of globally synchronized growth. In other words, a real expansion would come later because for the first time since 2007 the vast majority of the world was at least positive again.

Therefore, the world would start from synchronized low positive numbers and then move to inarguable recovery and strength at some point. That point was supposed to be 2018 and 2019. Instead, and you can only laugh, the IMF says now “growth has become less synchronized” well before hitting the liftoff spot.

What happened in between the sunshine of January 2018 and the cracks now very visible in the growth monolith by July? Dollar.

At the forefront of the global economy in either direction is always China. The WEO in January pointed to, among other positives, “sentiment indicators.” In some places like the US they’ve been sky high, consumers as well as industry. In others, such as China, they never really moved that far. This year, they’ve been at best steady though in truth they are moving lower. 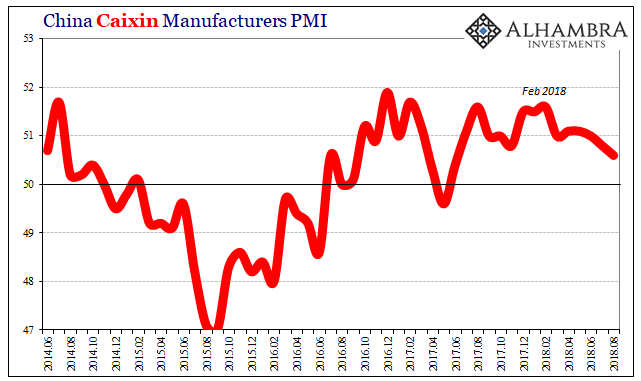 Earlier this week, Caixin reported that its manufacturing index declined to 50.6 in August from 50.8 in July. That was the lowest in fourteen months, having been moving weaker since February (when US imports of Chinese goods peaked in anticipation of trade war restrictions).

The official PMI’s have also been moving modestly lower. Staying with manufacturing, the NBS version was 51.3 in August, up by the smallest amount from July. The index had only gone as far as 52.4 last September. Since, rather than accelerate as the January 2018 IMF WEO had projected, it has stagnated (at best).

The underlying pieces have pulled the headline lower. New Orders are heading in the wrong direction as are New Export Orders. The latter have been below 50 for the last three months and in five out of the eight months of 2018 (so much for US demand). 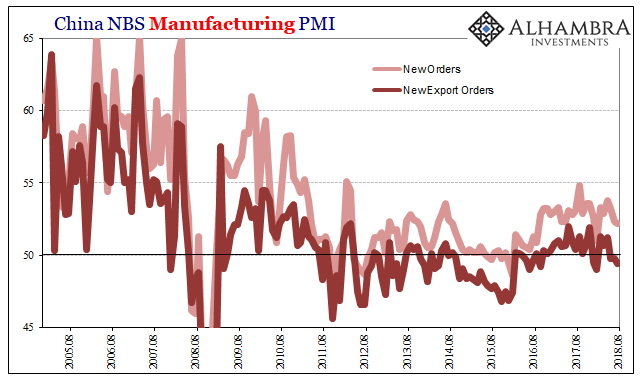 China’s non-manufacturing PMI reached 55.3 in January. Since then, it’s also been a little lower. After registering 55 again in June 2018, the index fell to 54 in July and rebounded only to 54.2 in August.

All three collectively are suggesting a slowdown ahead. It’s not a huge cliff in the immediate future awaiting the Chinese economy, only a rounded inflection. Then again, that’s how all these downturns have begun in the past. As one analyst working for Caixin put it:

I don’t think that stable supply can be sustained amid weak demand. In addition, the worsening employment situation is likely to have an impact on consumption growth. China’s economy is now facing relatively obvious downward pressure

It’s not obvious to everyone, though. “Strong” economy and US decoupling will almost certainly persist as themes for the rest of the year in most media and among central bankers (where the media gets its opinions). The result will be the usual repeated confusion, the increasing distance between negative indications and the unshakable confidence of, and the uniformly positive descriptions contained within, conventional “analysis.”

But if even the IMF isn’t so confident now, then it’s already serious and the global inflection in all likelihood quite far advanced.

You get the sense these guys have no idea what drives the dollar, therefore they have no idea which way the global economy will move at any given moment. One final thought: if globally synchronized growth can begin to fall apart in just a few months, how strong was it really?

The IMF singled out China as well as Brazil and South Africa in January. We know about China already. Brazil is once more in trouble again, and South Africa already two straight quarters into contraction. They really have no idea what they’re doing. 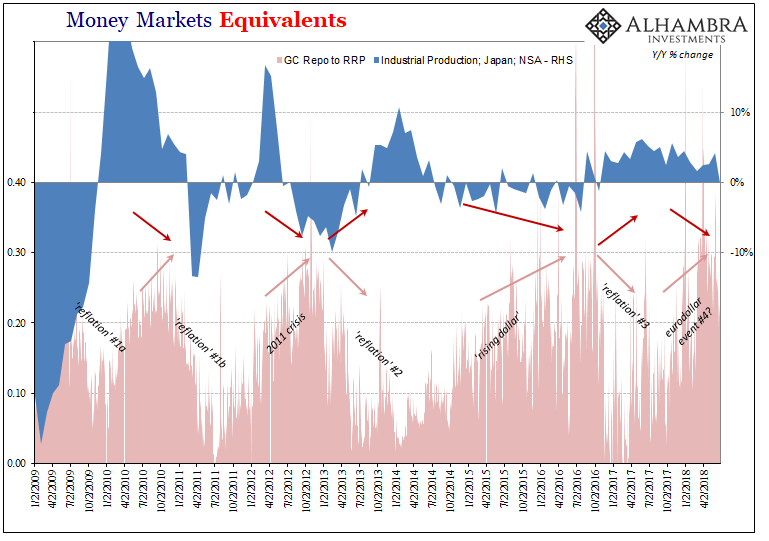