It’s no longer possible to know what state Chinese industry may be in. This is no small matter. Industrial production in China is the bedrock of economic growth throughout the rest of the world. Without it, there really isn’t anything left to do but struggle. And since industry’s performance there is predicated on demand in the Western world, this is the middle of everything.

According to China’s National Bureau of Statistics, Industrial Production is a six. What that six might mean is increasingly open for interpretation. Ever since August 2014, a span encompassing 49 months in total, Chinese IP has been at 8% or less. It’s never been like this in modern China. Of those four plus years, 42 months straight have been fixed right around 6%. To write that it’s unusual for any statistic is one of those Hall of Fame understatements.

There have been a few months where IP has been less than 6%, as well as the occasional one around 7%. Out of those 42 months, IP has been within 0.3% of 6% on either side in 27 of them. There is no longer variability in the figure, and that’s just not normal. In August 2018, Industrial Production was up, surprise, 6.1% after rising 6.0% in both June and July. 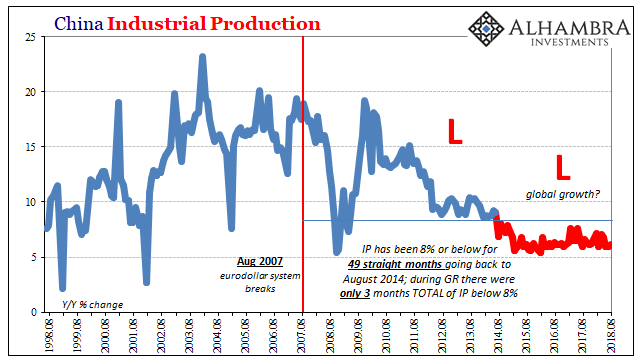 What that proposes is how IP is showing us the best case for China’s underlying true industrial condition. For an upper boundary, this isn’t very good at all (which suggests why it may be at 6%). There is a reasonable probability that especially manufacturing is faring materially worse than the projected official rate.

It is the idea of rebalancing that pushes this question about industry back into the spotlight. Many years ago, as China’s economy slowed “unexpectedly” the idea was put forward the Chinese economy could survive and even thrive without an actual recovery in the West. It was at first dismissed because how could there be no recovery in the US and Europe with the dream tickets Bernanke/Yellen and Trichet/Draghi?

After 2011, however, the idea gained traction though split off from the other part. Economists laud rebalancing but grow silent if ever asked exactly why China would have to do this.

In any case, a consumer-driven, internally-focused economy is supposed to be taking the place of China Inc. The successor to Japan Inc. has attempted to learn from the pitfalls of the latter’s export-oriented economy which can no longer generate the favorable conditions for continued good fortune (wealth is sustained progress, not the illusion of transitory “prosperity”). If you are the world’s chief supplier of goods, and the world isn’t ever going to actually recover, you better have a Plan B.

How much of an alternative rebalancing ever was has been debateable. I don’t believe it was ever more than a cover story, a plausible narrative whose only intent was to say, “we meant to do that” in the face of inarguable slowing (“L”).

Since August 2014, however, retail sales, a key component for indicating the progress of “rebalancing”, like Industrial Production it has shed its volatility. Whereas IP has been almost pegged at around 6%, RS has been near pegged closer to 10%. Or at least it had been up until the middle of last year. For August 2018, retail sales rose by 9%, the fourth straight at or below 9% for first time ever. 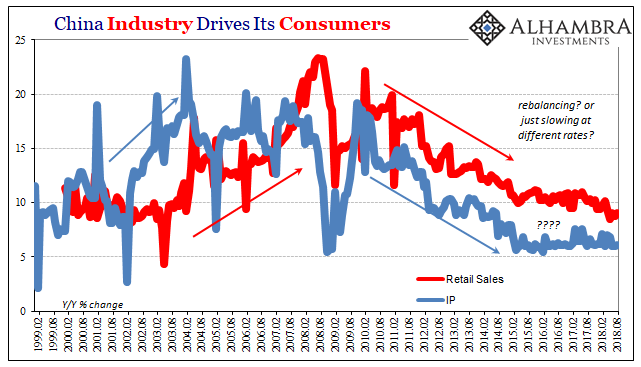 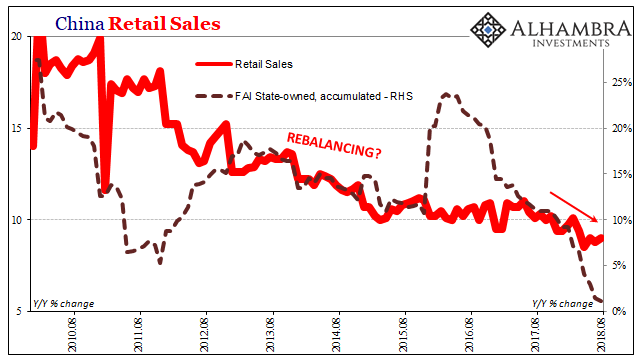 As government officials scale back their fiscal spending efforts, rebalancing has taken a hit that curiously IP hasn’t. It suggests China’s economy has been in many ways held up artificially by government waste. Scaling back the pace of waste leaves China’s internal economy to suffer its much-reduced industrial baseline.

Thus, the question of how much reduced is paramount. If officials are no longer willing to support rebalancing in the same way, where is China left to go from here? Six percent IP isn’t a very good place to start, even if that is the actual number. Fixed Asset Investment (FAI) on an accumulated basis was just 5.3% in August, the lowest on record. 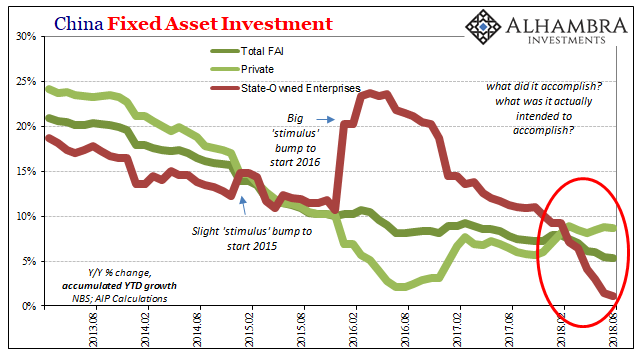 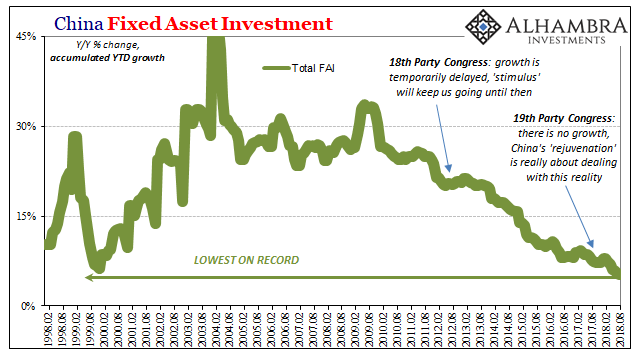 We are, I believe, about to find out what this means. China is therefore caught between two huge unknowns. What does the economy look like without government support? In addition to the sudden withdrawal of “stimulus”, how can it fare absent globally synchronized growth that even the IMF states is no longer synchronized?

And the Chinese haven’t even gotten to this prospective downturn yet. In many ways, this is one of the proximate causes of it, should one turn up for the global economy. This all underscores the tremendous artificiality to Reflation #3 and the narrative of globally synchronized growth in the first place. It took a lot (including hurricanes in the US) to even get close enough to plausibly suggest things were getting better.

But like China’s IP or RS, they never really did. In other words, downside risks.

Part of that stems from a purposeful misreading of what the Chinese wanted to accomplish to begin with. I don’t think 2016’s big burst of “stimulus” waste was ever meant to restart growth, not in the way it has been characterized. With the greater benefit of further hindsight, it seems more likely the Chinese simply wanted to slow the descent to a (hopefully) reasonable pace.

If China can’t really alter its fate and it will end up Japan Inc. either way, then it can at least try to manage how it gets there. And what could happen when it does. I wrote back last October in the midst of that seemingly distant inflation hysteria the Chinese sure appeared to be preparing for the opposite case:

In the West, “we” can’t make out the economic risks because the political class has forbidden it as a legitimate topic. And so in that respect the world over here is perhaps further along in the wrong direction politically than even China. To be clear, I’m not suggesting authoritarianism is the answer, only that the Chinese at the very least appear to be approaching the world as it is from a far less idealized, imaginary even, perspective.

This is the reality of the “L.” Not just China’s, but the world’s.