There was an old joke among bond investors that use to say no AAA-rated bond had ever defaulted…because it was downgraded several times first. By the time the issuer was in restructuring, it was junk accredited long before then. It ceased being funny around February 2007.

There is something similar and similarly tragic that takes place in the wider macro context. The perpetual optimism of each global reflation is at first always extrapolated to the most extreme. The reappearance of positive numbers in whichever set of economic accounts is converted into the definitive sign that the economy will go on forever in its best state.

This has happened, of course, several times so far across the last eleven years; including once in the middle of 2008 especially in the US where for brief time in the spring Economists and Fed officials actually thought the American economy might avoid recession altogether.

The economy has instead repeatedly fallen backward. But those optimistic projections don’t adjust all at once. They are, typically, lagging anyway especially in the “unexpected” nature of each downturn so far. But more to the point, forecasts are like bonds downgraded only a notch at a time rather than all at once.

The process is usually something like this: certified 100% guaranteed recovery that nothing can possibly interrupt (this time); strong recovery with some small risks on the distant horizon; strong economy that has plateaued; strong economy with immediate risks but that are only transitory; strong economy right now in a downturn but one that is merely the space before the actual recovery happens. 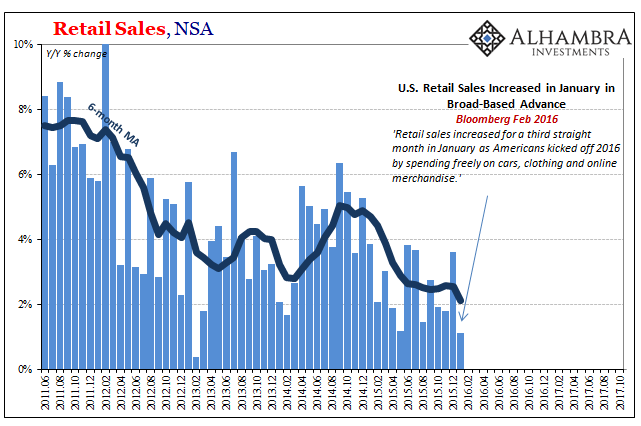 The “strong economy” is never quite downgraded, the qualifications to the qualifier are in its stead.

The IMF today gives us a rare twofer; they now say “there are clouds on the horizon” at the same time they admit “global growth plateaus.” In 2017, the organization had forecast sustained acceleration:

Last April, the world economy’s broad-based momentum led us to project a 3.9 percent growth rate for both this year and next. Considering developments since then, however, that number appears over-optimistic: rather than rising, growth has plateaued at 3.7 percent.

Part of the reason stems from, from what I can tell, a misunderstanding over the word “stimulus.” John Maynard Keynes would be appalled.

Growth in the United States, buoyed by a procyclical fiscal package, continues at a robust pace and is driving US interest rates higher. But US growth will decline once parts of its fiscal stimulus go into reverse.

How can it be “procyclical” if after it ends the cycle downgrades? That’s not stimulus, it’s mere interference. True stimulus would, as Keynes claimed, “pump prime” meaning it would set off a virtuous circle whereby the removal of said stimulus would be rendered immaterial to the cycle that followed. The economy doesn’t go up and come back down, it goes up and then keeps going.

I don’t really think the IMF has misstated Keynes at all, rather they have to say something about global plateaus and the reemergence of those damn clouds. They are, at present, presented overseas in Asia.

The negative revisions for emerging market and developing economies are more severe, at -0.2 and -0.4 percentage point, respectively, for this year and next year.

These are all, the IMF assures us, still very good numbers and projections. They’ve merely adjusted from something like perfect to a little less than perfect. And they sound exactly like every bond rating downgrade going from AAA to AA. What are the chances this one, unlike the last three, stops there? 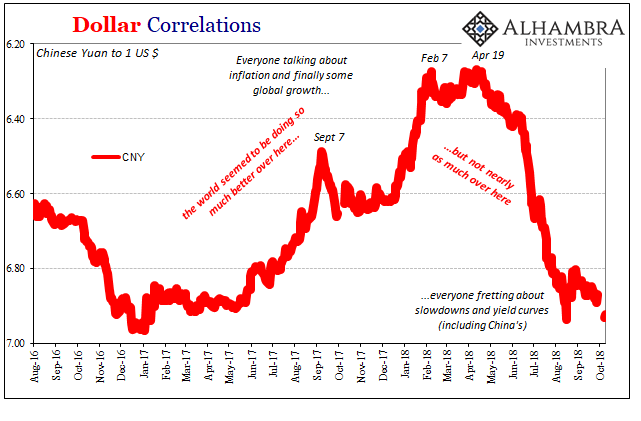