Loreley Rock near Sankt Goarshausen sits at a narrow curve on the Rhine River in Germany. The shape of the bluff produces a faint echo in the wind, supposedly the last whispers of a beautiful maiden who threw herself from it in despair once spurned by her paramour. She was transformed into a siren, legend says, a tantalizing wail which cries out and lures fishermen and tradesmen on the great river to their death.

While it makes a great story for local conversation, this part of the Rhine is now treacherous for far different reasons. Drought in middle Europe has caused water levels to drop, in places like near Loreley Rock making the river unnavigable. Nearly all freight coming from the lowlands passes through here on its way to Germany’s industrial heartland.

In more ancient times, it would have been a catastrophe. In modern times, it is an inconvenience, an economic inefficiency of the kind that strikes anywhere in the world with regularity. Rather than by boat, material and goods are being diverted to railroads and highways.

Still, there are going to be costs. According to the Kiel Institute for the World Economy this will mean German GDP in Q3 2018 contracted by 0.3%. Together with disruption in Germany’s automobile industry because of its slow reaction to the worldwide harmonized light-duty vehicles test procedure, the engine of Europe is experiencing a transitory blip. 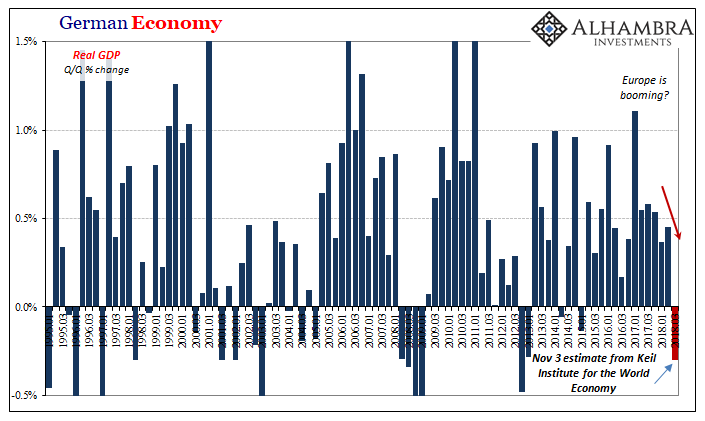 Eurostat has already put together a flash estimate for the Euro Area’s GDP in Q3. Presumably these include something for Germany, even though that specific country’s statistics bureau, Destatis, won’t release its figures until midmonth. The Continental numbers are already alarming.

No matter, claims Keil. There are excuses already handy for anyone thinking Europe’s economic boom is fizzling (or has fizzled). We are back to Economists’ infatuation with weather and climate. It was a common enough thing several years ago, particularly 2015, when sudden snowstorms, or wet weather, were blamed for “unexpected” weakness. In this case, apparently, drought works just as well in that role.

While we don’t know exactly what Germany’s GDP will come in at, Italian officials have provided theirs. Germany and Italy together accounted for 44% of Europe’s total output in Q2 2018, the group’s first and third largest individual economies. In Q3, Italian real GDP growth was basically zero (+0.021%, Q/Q). 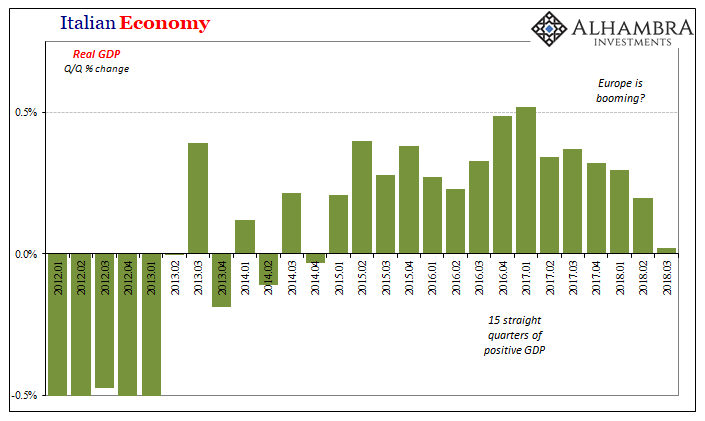 This, too, isn’t supposed to be concerning. Italian GDP has grown for 15 straight quarters including the near miss in that last one. This is what matters, they say, along with the withered Rhine. In other words, the economy must be doing just fine despite all these things.

Mario Draghi indicated last month that he saw “transitory” factors in these places, too. Among them:

But [Draghi] attributed some of the weakness to one-time factors, such as the introduction of new European Union emissions standards that proved tougher than expected for auto manufacturers to meet. Deliveries slumped because the carmakers had trouble getting regulators to approve new models for sale. 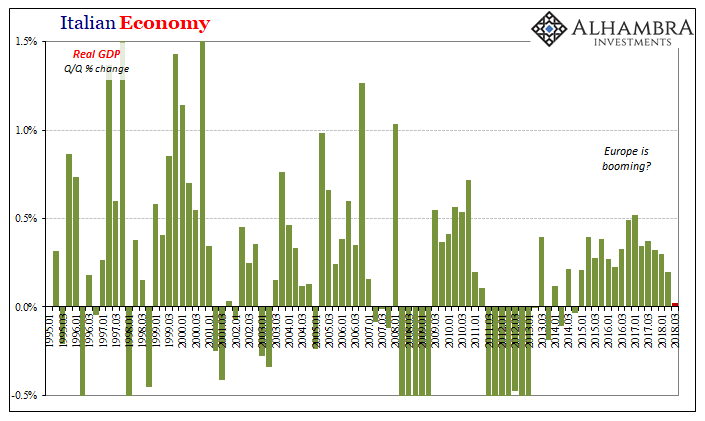 Sure, but none of that would explain Italy nor Europe’s sudden deceleration in 2018 where acceleration was supposed to be. And it doesn’t in any way account for the either Italy or Germany the past ten years.

Germany has fared far better than Italy in the post-crisis era but if that’s the best Europe’s economy can do then the whole place is in deep trouble. 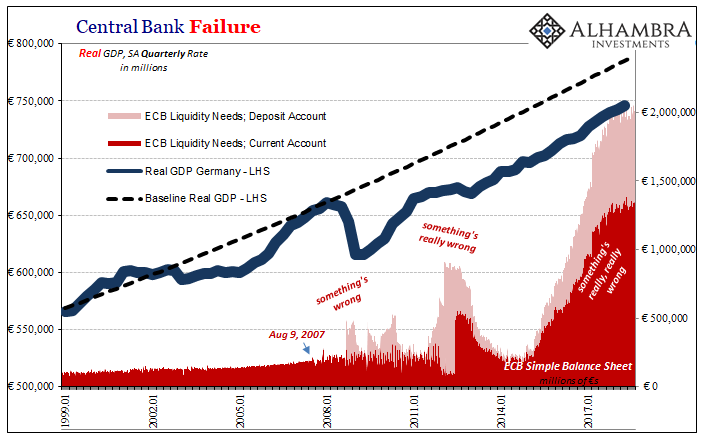 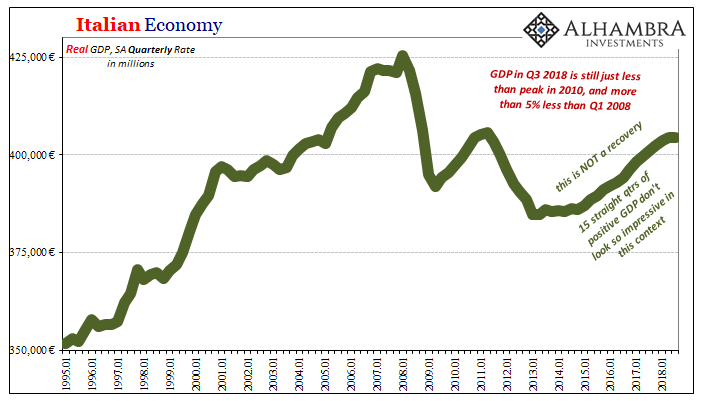 This, ultimately, is what matters more about 2018 and more so 2019. The European economy Germany included has never recovered from 2008. It is this one fact that explains everything. While it’s easy to blame drought, emissions, or even the poor woman of Loreley Rock, those are all just legends being told so people can feel better about very real dangers.

These are growing, not one-off. I wrote a few weeks ago: 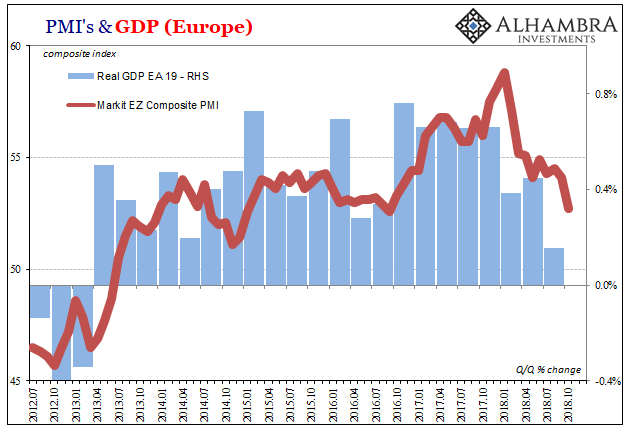 IHS Markit reported yesterday that its Composite PMI for the Eurozone in October fell to the lowest level in two years.

Both the manufacturing and service sectors recorded slower rates of growth during October. Following on from September, manufacturing registered the weaker increase in output, posting its lowest growth in nearly four years…The downturn in overall activity growth was linked to a weaker gain in incoming new business. October’s survey data showed new work rising at a modest pace that was the slowest since September 2016.

Markit’s Chief Economist Chris Williamson didn’t mention the Rhine, emissions, nor mythical stories, but I bet he wished he could have. Instead, Williamson to his credit zeroes in on the real issues:

In fact, those prior factors (trade tensions, rising political uncertainty, growing risk aversion) all trace back to the last one (tightening financial conditions). It sure does in Italy where the Italian economy is not just at risk of shrinking, but shrinking some more. The political situation for the boot is a product of the economy being decimated by 2008 and afterward, the lack of upside for all the continuous downside.

Now that it may be back again, at best it portends uncertainty as Williamson acknowledges. Uncertainty is a killer for an economy in a precarious state.

And that’s the one thing Mario Draghi cannot concede; ever. He has, like his counterparts elsewhere around the world, thrown everything on this one. This globally synchronized growth was supposed to be the happy ending that fixes most if not all these lingering, festering economic, political, and social sore spots. A real recovery would do that, not be uniformly bothered by emissions regulations.

Unfortunately, the direction toward which Europe is now heading suggests this, like the others, just isn’t going to be a real recovery. The European economy is a global warning that “tightening financial conditions” are already causing very real economic disruption. It has been quite expected.

We’ve seen the upside and it is minimal, way less than what is required. Denial won’t help; in fact, it will continue to sow mistrust and incivility. Mario Draghi, as Jay Powell, they are our modern sirens.