The Starring Role In The Powell Pause Isn’t R-star

The Starring Role In The Powell Pause Isn’t R-star

R-star is a fiction which like term premiums for interest rate decomposition allows Economists to skate past reality and onto their econometric blackboards. If there was a neutral rate, which R-star (or R*) proposes to be, why would there be only one and what good would knowing its level today do? In a dynamic world, if you figure out where neutral is today it won’t be there tomorrow.

In many ways, it is a straight up contradiction. Take something like forward guidance. Policymakers think that monetary policy is powerful but even so it takes some time to work through all the hidden economic processes, the beauty of Adam Smith’s invisible hand unknowable to professional and layperson alike. Thus, the central bank under expectations policy (there is no money in monetary policy these days) is forced to live in the future.

But if monetary policy lags into the future, how then could they evaluate where monetary policy rates are in relationship to that future today? You aren’t really supposed to provide an answer for that question, largely because you aren’t meant to ask it.

Jay Powell last week triggered the “Fed pause” scenario by making a lot of that little. Should the Fed pause on interest rates, why aren’t markets enthused over the prospect? After all, if “rate hikes” are the problem then fewer of them should help.

But, as noted earlier, they aren’t really the problem. And that’s the problem. When Ben Bernanke, taking over for Alan Greenspan, paused in June 2006, over the next year and a few months the economy got better? No. It got worse because it wasn’t the federal funds rate that dictated anyone’s monetary direction. 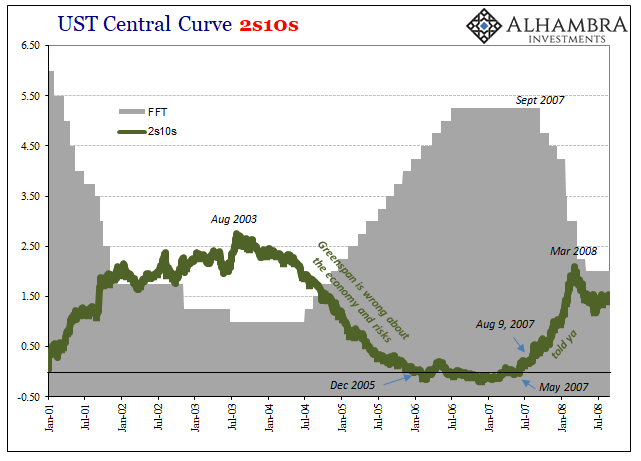 In fact, by the time the Fed reversed course in September 2007 it was already too late. Way too late.

There is always someone, however, who will take it positively. This Fed pause coupled with now yield curve inversion has some people thinking back to the myth of bad news is good news. The legend of central central banks won’t die easily.

“It’s a risk-on move, and the relief trade we’re seeing has allowed the front-end to reprice higher,” said Marty Mitchell, an independent strategist.

That was yesterday, not so much today. If the Fed isn’t going to be raising interest rates but maybe one more time over the next three months, then why is LIBOR still moving higher? Over the past few sessions, 3-month LIBOR has surged despite the unshakeable hawk Powell’s sudden dovish turn. 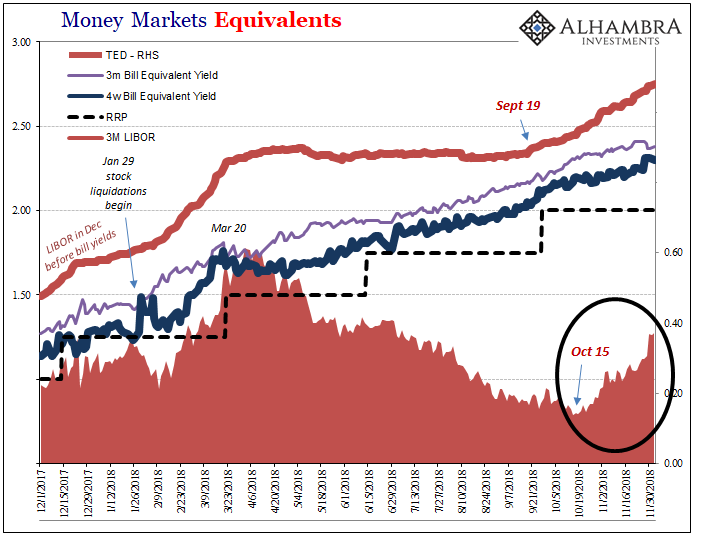 The market seems more concerned about why the Fed’s Chairman may have converted his bird. Remember, one year ago there was hysteria over just how aggressive monetary policy was to become. Now, it’s about a pause? That’s a big shift in expectations and relief is the last thing anyone should associate with it.

Central bankers are always, always the last to figure these things out. Therefore, if Jay Powell is now a bit worried then that doesn’t say anything good about where we are right now. If the most ardent optimist, the greatest champion of the unemployment rate view of the economy, is no longer certain about that view the entire thing skews toward the downside regardless of any other factor.

With inflation expectations falling, and growth projections with them, it is likewise interesting to note how gold has traded to a multi-month high since Powell. Gold was $1213 and change last Wednesday when he spoke, and this morning fixed at $1239 in London. If that was inflation/reflation, it would have been accompanied by the expectation (eurodollar futures) for more not fewer FOMC actions.

Like 2015, gold, LIBOR, WTI contango, UST inversion are all suggesting rising risks even fear. Again, if the recalcitrant policymakers at the Fed have noticed and are laying the groundwork for renewed “dovishness”, it must already be a big enough problem. 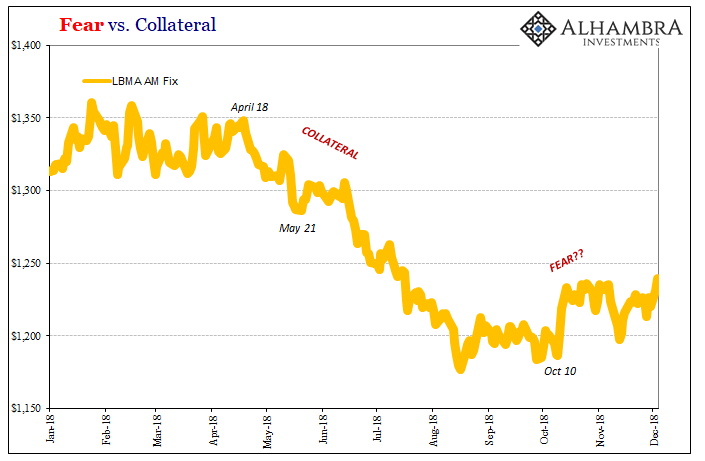 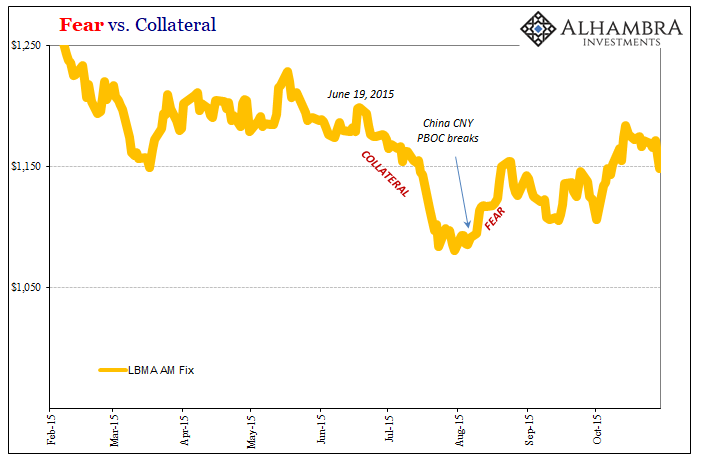 Lower for longer was never a good thing because there is no bad news is good news. If after a decade of all this the world needs more “stimulus” of any kind then all that prior stimulus stimulated absolutely nothing. It didn’t work, especially ZIRP.

R-star is simply the vehicle Economists will use to attempt to disguise their uncertainty. Powell can’t come right out and say “I’m now a little nervous” can he? But he’s also not as smart as he thinks, meaning that markets have figured out that’s actually what he is saying R-star or no.

The world in 2018 was supposed to be well into its fairy tale ending to the last decade of nightmare. The flat yield curve even in 2017 indicated it was only a slim chance to begin with. Now finishing up this year, the probability has scaled back down to nil. Even the R-star freaks are seeing only risk.

RIP upside. The fourth chapter in the nightmare stands before us.