How quickly things change. Only a few days ago, a fuel tax in France was blamed for widespread rioting. Today, Emmanuel Macron’s government under siege threatens to break its fiscal budget. Having given up on gasoline and diesel, the French government now promises wage increases and tax cuts.

Italy has found competition in the race to violate EU fiscal guidelines. Around the rest of Europe, the question is being asked. What happened?

Economists. They fooled Europeans into believing the economy was fixed. If you keep saying the thing is booming pretty soon a lot of people previously on the outside are going to expect it to benefit them, too. And if the economy really isn’t booming, then that’s just not possible.

Pass along some tax increases anyway and uncontrolled political conflagration is pretty much standard especially in Paris.

Some officials get it, in part.

“The problem is not so much income inequality,” he [Philippe Martin, head of the independent Council of Economic Analysis] said. “The big problem is that there is no growth.”

However, this year almost everyone has seen their tax bill rise because Mr Macron, intent on meeting the EU’s 3 per cent deficit target, has chosen to delay the cuts and front-load the rise in the contribution sociale généralisée. [emphasis added]

France, like Italy or Brazil, is a laggard they say. It’s their problem not anyone else. The rest of Europe can be booming without every piece of it taking part. Then again, unrest wasn’t strictly a French outburst over this past weekend.

Belgian police fired tear gas and water cannons at yellow-vested protesters calling for the resignation of Prime Minister Charles Michel after they tried to breach a riot barricade, as the movement that started in France made its mark Saturday in Belgium and the Netherlands…

The reasons for the protests are not entirely clear. Neither Belgium nor the Netherlands has proposed a hike in fuel tax — the catalyst for the massive and destructive demonstrations in France in recent weeks.

The only advice any government needs is to stop listening to Economists and central bankers; start listening to the people, citizens, and voters. Every time populism wins in an election it is immediately dismissed as illegitimate, some form of evil “ism” rearing up its ugly head. This is not a strictly European problem, either, it is as global as the unending malaise.

Things are likely to get worse before they get better. The economic news keeps coming up down. Not just in France or the Low Countries, but across all Europe and the rest of the world. If there was no growth during this “boom” there was at least small positive numbers. Those are increasingly disappearing. 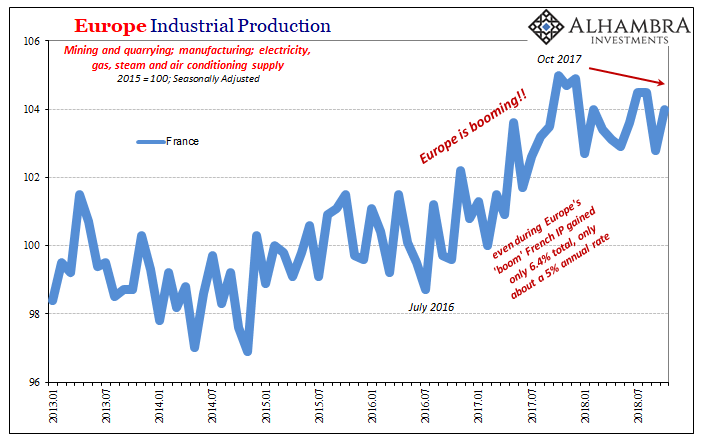 French industry, as besieged as its government, has been on a losing streak of more than a year already. As has been the case each of the past four worldwide downturns (like business cycles throughout postwar economic history), industry and manufacturing lead the overall direction. A “manufacturing recession” has proven to be only the beginning not isolated weakness. 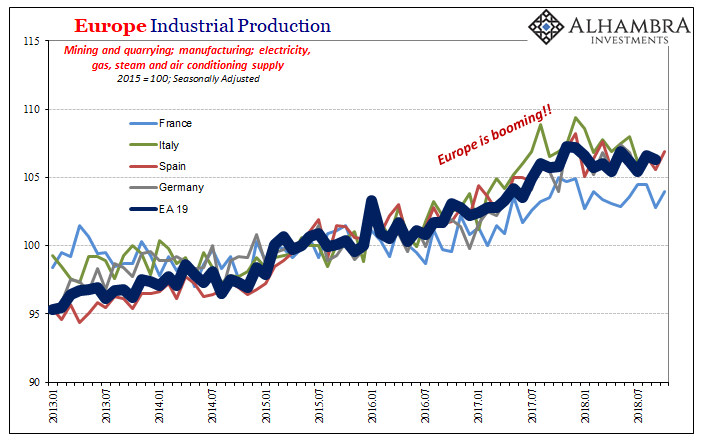 Again, it’s not just France though business there has surely lagged. But the lowest or near lowest performing out of this group is really indistinguishable in terms of just plain awful. Two percent behind Germany, Italy, or Spain really means no different than Italy, Spain, and Germany. The most fundamental aspect of all this is how none of these economies have ever recovered from 2008. Not one.

It doesn’t matter what metric or account you use. Each and every economy broke down ten years ago and has been permanently shrunk as a consequence. With that in mind, it’s a small wonder why it has taken this long for rioting. People gave central bankers every chance to get it right, stretching the benefit of the doubt remaining superhumanly patient all throughout. 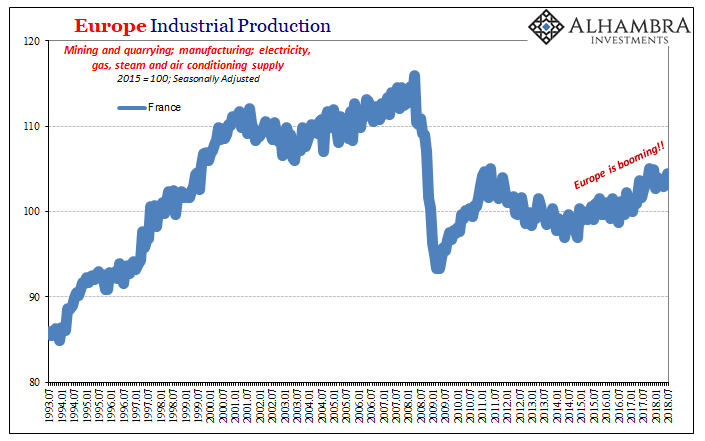 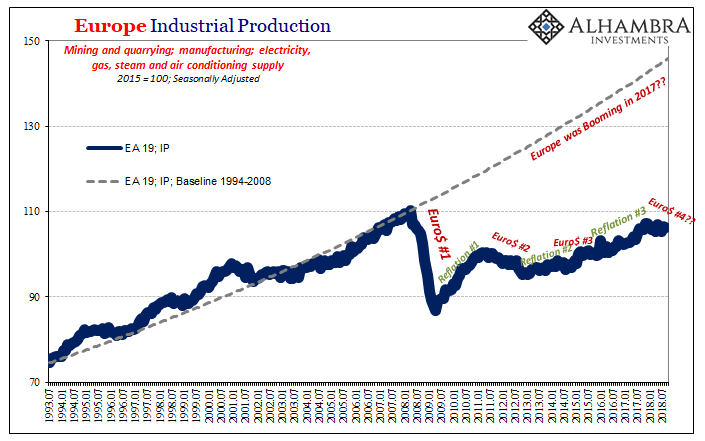 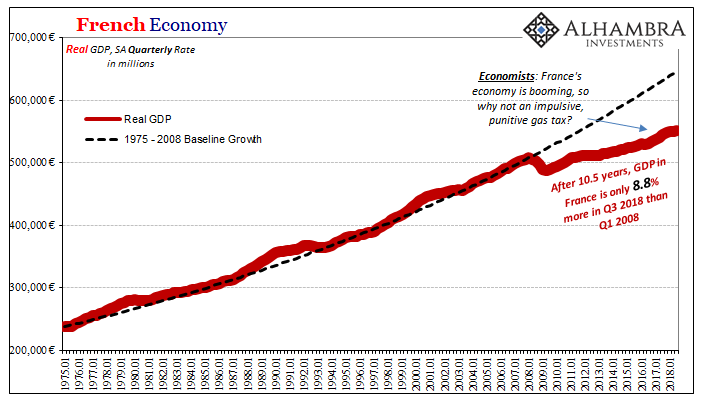 That’s a tense baseline to begin with, especially as officials refuse to admit this is what really has happened. Then to call last year a boom and an end to the misery only to find this year growing and spreading danger in its place. The economy turns worse (again) and so does the social situation.

In Germany, the engine of Europe’s system, a sudden contraction in Q3 2018 was immediately blamed on non-economic factors. It will bounce right back in Q4 Economists claim. Mario Draghi remains supremely confident. He has to be about Germany because if that country falters Europe’s going to follow no matter what.

The latest figures and estimates from Germany suggest the bad times are only getting started. One of the first warnings was suggested by the Zentrum für Europäische Wirtschaftsforschung (ZEW) and its indices of Germany’s economic situation and sentiment. The latter has already dropped negative to levels consistent with recession and despite all mainstream predictions for it to bounce back it has remained steadfastly under zero (-17.5 in December). 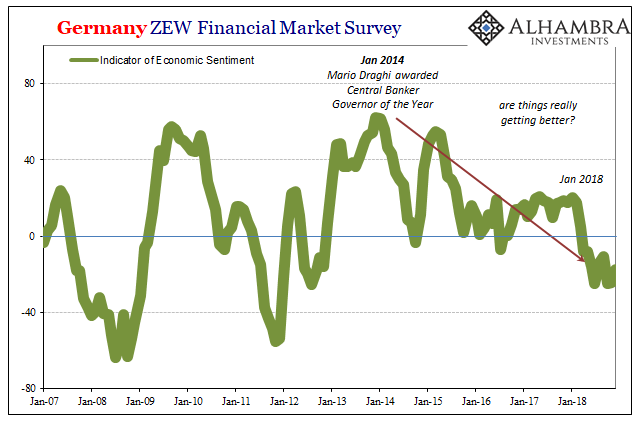 With sentiment stubbornly sinking, Germans are growing more concerned about how things are today. The ZEW situation index has dropped more than 40 points just since May. Most of that decline, 25 points, has materialized over the past two months.

If Q3’s minus GDP in Germany was supposed to be temporary, why are both ZEW’s in Q4 still moving the wrong way? 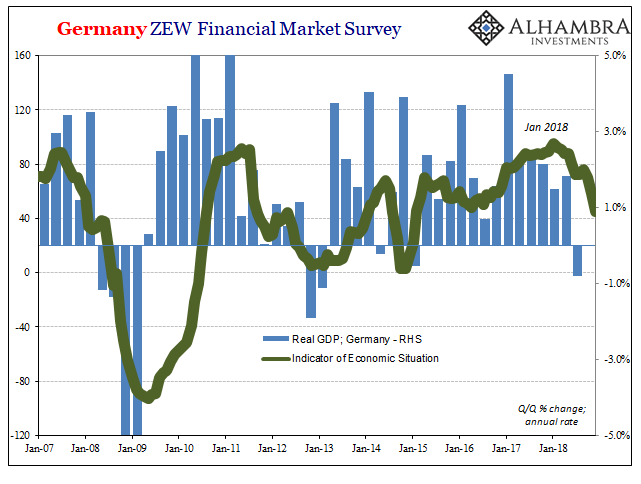 Central bankers and Economists really, really don’t know what they are doing. The costs are no longer strictly economic in nature, though those are still piling up anyway.

QE (and ZIRP) was a massive waste, pure fraud that has only served to sow further mistrust all over the world. Remember, Mario Draghi’s ECB right this minute is still buying up assets all over the financial landscape, the balance sheet still rising as it “prints money.” It doesn’t matter if a central bank is doing QE or not, the results are the same anyway.

“People have this feeling that the Paris technocrats are doing complicated things to screw them,” said Charles Wyplosz, an economics professor at the Graduate Institute of International and Development Studies in Geneva.

If only it was limited to “Paris technocrats.” 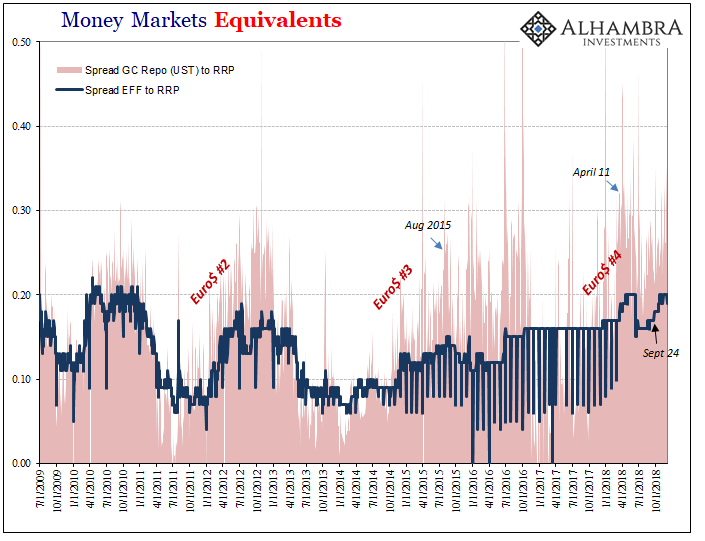