Keynes Was Right, The More Evil of the Two

Keynes Was Right, The More Evil of the Two

I am no fan of John Maynard Keynes. But this isn’t to say that there is nothing worthwhile about Keynes’ work. Indeed, it is a logical fallacy that one can’t object to his conclusions while at the same time admiring some of the ways with which he arrived at them. There is a lot about what Keynes thought, and wrote, which survives historical scrutiny.

This is one big reason why more than A General Theory forms the basis for what modern Economics has become. But we also must realize that Keynes’ contributions were not strictly scientific. There was politics at root in his views. This is the general ideology which has largely been recombined for modern use, good and ill.

In 1931, while a fellow at King’s College, Cambridge, Keynes wrote and pulled together his Essays In Persuasion. The Great Crash had only recently struck and by that year the follies of recovery had faded into more horrific reality. Many around the world had expected 1929-30 to go as the economic interruption ten years earlier had; a deep depression followed by no lasting effects, the world quickly returning to normal.

When describing class effects of inflation in the prewar (the first one) period in his essay on the changes in the value of money (Social Consequences, 1923), he wrote, “the depression of 1921-22 did not reverse or even greatly diminish the relative advantage gained by the working classes over the middle class during the previous years.” A decade later, however, everyone could see that this was different. The Great Depression hadn’t yet been called that, by then there was no doubt the world had stumbled upon a very different case.

This was massive instability of the type never before witnessed, or even theorized. In some ways, maybe nobody should’ve been surprised. The latter 19th century was bursting with innovation and technology, the world as it was already erased, rebuilt, and erased again. On a more fundamental level, Keynes was trying to argue that progress itself was a key element fomenting volatility.

In the realm of economics, these would chiefly divide among the two most visible extremes: inflation and deflation. He spoke of these not in the modern conception but as to how each would influence affairs among a more fixed world. Monetary regimes had been built up to attempt stable prices only to see them wrecked by extreme bouts of one or the other. The Great Depression was simply the greatest outbreak.

What he was arguing was that both were wrong, and evil. But they weren’t equivalently so. The one was far more destructive.

We see, therefore, that rising prices and falling prices each have their characteristic disadvantage. The Inflation which causes the former means Injustice to individuals and to classes—particularly to rentiers; and is therefore unfavourable to saving. The Deflation which causes falling prices means Impoverishment to labour and to enterprise by leading entrepreneurs to restrict production, in their endeavour to avoid loss to themselves; and is therefore disastrous to employment.

Truer words have never been written. Central bankers have dedicated their central banks to defeating deflation at all costs because of this. They will tolerate the injustice of inflation, hopefully controlled, in order to keep at bay the general impoverishment of its opposite.

Theory and practice are, of course, seldom in sync. How does one control one evil so as to use it against another? It is this question which has led economics as a general discipline into econometrics, thus Economics. Economists became obsessed with mapping out mathematically all the factors that might determine these consequences. DSGE models are the product of the desire for dependable prediction.

But it all stems from one of Keynes’ most insipid assumptions. At the conclusion of Social Consequences, the essay noted above, he writes:

For these grave causes we must free ourselves from the deep distrust which exists against allowing the regulation of the standard of value to be the subject of deliberate decision. We can no longer afford to leave it in the category of which the distinguishing characteristics are possessed in different degrees by the weather, the birth-rate, and the Constitution—matters which are settled by natural causes, or are the resultant of the separate action of many individuals acting independently, or require a Revolution to change them. [emphasis added]

While he was specifically thinking of the value of money here, this dictum has been applied to almost every aspect of economy even finance and money. Central bankers, these neo-Keynesian statisticians, are deeply distrustful of markets for these reasons; believing in themselves as the necessary and proper counterbalance proposing sustainable progress often directly opposed to the messy free markets.

Therefore, as a consequence of the “grave causes” which might visit so much destabilized damage to any economy, there must be, in the Keynes view, the “deliberate decisions” of so many enlightened Economists to control these negative forces.

Here’s the thing, though, how would we know that their way is better? The real fatal flaw in the arrangement has been the lack of accountability. Most Economists today as in Keynes’ day think of themselves as dispassionate, detached scientists and judges; in other words, the very people who claim to be better are the same who are to say what’s better.

The result has been and is “jobs saved.”

As we find time and again reviewing “their” work, the products of their policies, they craft these measures intended for stability based upon the consistent rejection of market data (Bill Dudley’s tortuously embarrassing relationship with eurodollar futures, as one example). Whether or not they can be blamed for the crash, even they have been forced to admit they never saw it coming. This never factored in Keynes’ essays.

Nor the case for the aftermath, a crisis ten years deep that is still plaguing the global economy. Central bankers might protest that there hasn’t been outright deflation, and certainly not on the scale seen in depressions past, but this like “jobs saved” doesn’t measure up to reality. Because he was right about the deflationary tendency, it “means Impoverishment to labour and to enterprise by leading entrepreneurs to restrict production, in their endeavour to avoid loss to themselves; and is therefore disastrous to employment.” 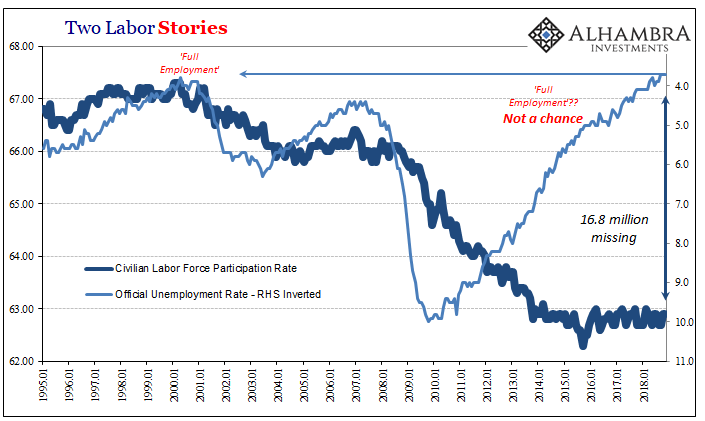 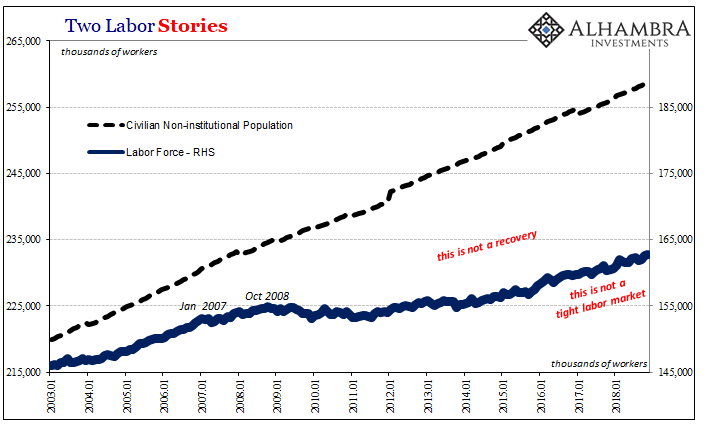 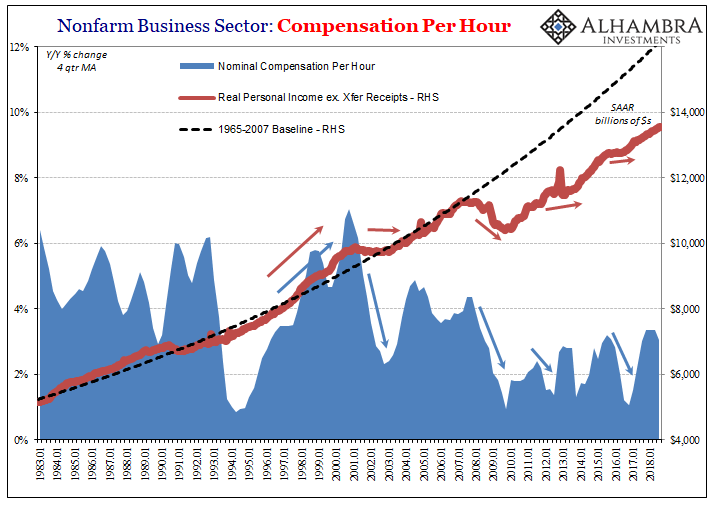 Pretty much describes the last decade. Various excuses have been offered so as to downplay these consequences, including “jobs saved”, but the more time passes the more it can’t be denied the world has a labor problem – not just in Paris.

Don’t worry, it’s coming. That’s what they keep saying. In 2017, authorities all over the world put all their chips into the center, going all in on globally synchronized growth. It briefly led to inflation hysteria which was the calculated overhyping of some minor improvements. Disinflation continued anyway, even on this presumed upswing. 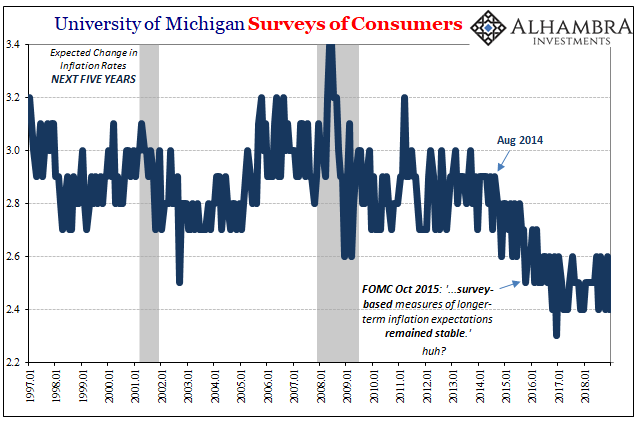 In the United States, there just hasn’t been any sign of wage-driven inflation. Instead, market signals especially money curves keep suggesting the same negative factors as we’ve seen over the last decade – all consistent with “disastrous to employment.” From surveys of inflation expectations to the various consumer price indices themselves, nothing had changed.

In the CPI, for example, there has been a very curious lack of evidence for an inflationary shift. Core rates have remained conspicuously subdued, some of them perfectly obvious in what they show. 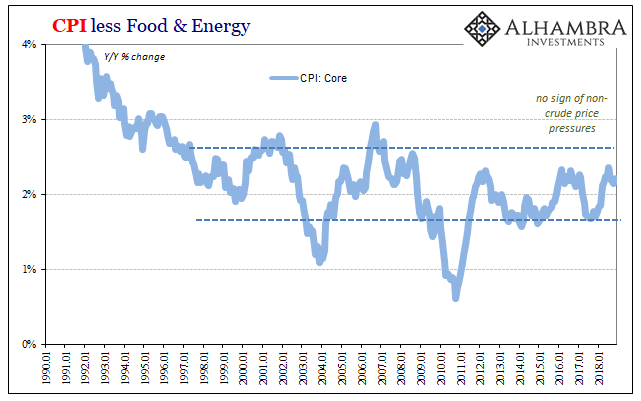 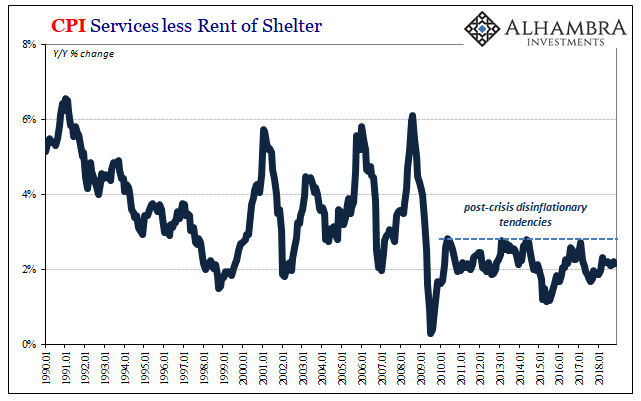 Researchers at the Federal Reserve Bank of Atlanta, building upon work done in the Cleveland branch, have taken parts of the CPI and constructed their own indices attempting to create a better forecasting system by using discrete differences in economic behavior.

The “sticky” CPI is made up of those consumer product categories contained in the CPI basket where prices change much less on average than those in the “flexible” category. For example, as the Cleveland economists note, the price for tomatoes, they found, changes every three weeks. Those of coin-operated laundries, every six and a half years.

This distinction is predicated on another of Keynes’ general theories, the concept of “sticky” prices in addition to wages. That is, in the context of the CPI, there are goods whose producers know changing the price of that good is fraught with danger and costs – primarily risks to demand (simple economics). These tend to be longer run considerations; therefore, the market might be telling us something about deeper economic and cyclical expectations where prices are sticky.

Indeed, running their regressions, as is their tendency, the Cleveland Fed researchers found the sticky version of the CPI offered “alternative proxy for inflation expectations [more accurate] than the headline CPI.” Keynes may have distrusted markets, but he couldn’t ever deny that there was powerful information contained within them (the underpinnings of Big Data).

His proposal was of an educated class of officials who might better use that data for markets’ own good, to prod them over time toward “optimal” outcomes. 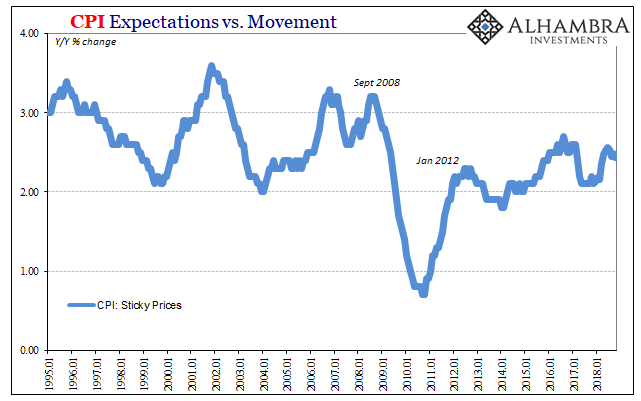 The “sticky” CPI continues to suggest producers who are wary of raising prices, not those who believe what Bernanke/Yellen/Powell have been saying. And if they are skeptical in pricing, they in all likelihood have very good reason to be since they aren’t raising wages, either. There is a pretty clear relationship (lagged) between the two – earned income and the ability of workers as consumers to absorb upward price changes. 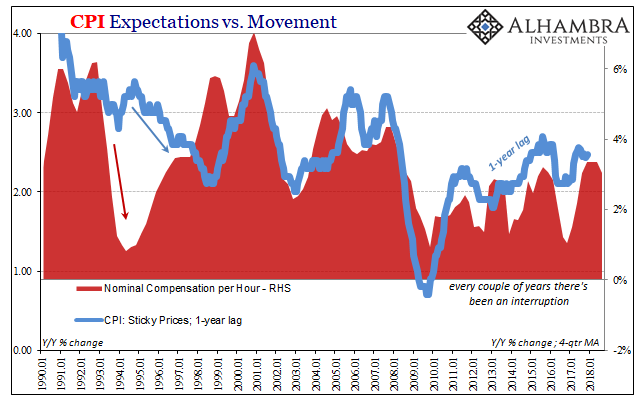 Inflation hysteria was always the same dividing line as what Keynes had long ago proposed; markets versus Economists. People should not be surprised by continuously disappointing inflation headlines, like today, where the promised uptick in inflation meaning economy is for yet another month pushed into the future. Markets, like eurodollar futures and UST’s, have been consistent about liquidity therefore monetary risks – deflationary processes – for a very, very long time.

Central bankers have been equally as consistent in their promises to overcome them as well as their failure to ever do so. If you can’t even define money, pace Friedman, how would you know if or when the monetary system is failing? Inflation follows directly from that. John Maynard never envisioned such intellectual impoverishment for his Exemplars.

Disinflation is not the same as 1930’s-style deflation, to be sure, but the end results are, as Keynes proposed, the same destructive force that if left unchecked for a prolonged period lead to far worse consequences than an inflationary outbreak (Keynes excluded hyperinflation like Weimar Germany from the catalog).

Markets, even those for consumer goods, are constant in declaring that Keynes’ intellectual disciples really have no idea what they are doing. It’s not any mystery why instability continues to be the primary global problem, and consequence. Nobody could possibly live up to an ideal. It was never wise to base all official capacities that they could. Politicians need to start listening and heeding markets, not Economists, the best sources of good information. 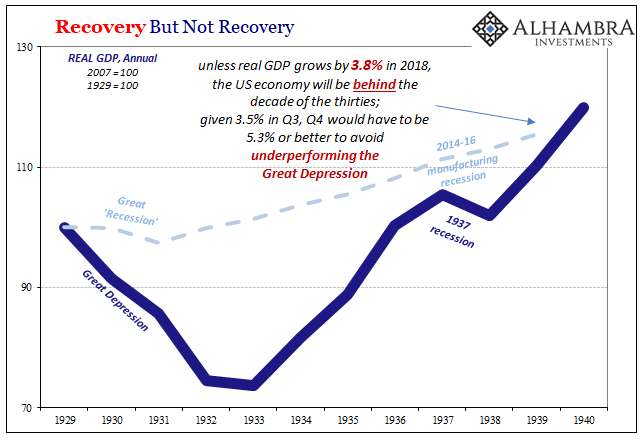