The Basis Behind The Forming ECB ‘Pause’

The Basis Behind The Forming ECB ‘Pause’

These things are all related, not that they are in any way connected by conventional thoughts on the subject of the global economy. Two European officials are now on record hinting at an ECB “pause.” There is one already underway in the US, Federal Reserve officials past and present debating how long it might last while markets price probabilities for the first cut.

The situation in Europe is a little different in that pausing means failing to start. In that way, it would be more like the Fed’s first pause in 2015 and 2016. One of the two ECB members is likely to replace Mario Draghi when his single, non-renewable eight-year term expires in October.

Two of the top contenders to become the next European Central Bank president said they don’t know if the institution will be able to raise interest rates this year…Benoit Coeure and Francois Villeroy de Galhau both said in Bloomberg TV interviews in Davos that the ECB is still judging the extent of the euro area’s economic slowdown and any increase in official rates will depend on that prognosis.

Judging by Germany’s bond market, they’re not raising anything anytime soon. Economic stats out of Germany concur, coming in at recessionary rates or even minus signs already. Mario Draghi’s position has been that German weakness is a product of transitory and specific factors; emissions regulations and local weather.

With each successive monthly data point, however, that position is becoming untenable. Thus, Draghi retreated somewhat yesterday, admitting there is some stickiness to the unexpected softness.

Incoming data have continued to be weaker than expected as a result of a slowdown in external demand compounded by some country and sector-specific factors. While the impact of some of these factors is expected to fade, the near-term growth momentum is likely to be weaker than previously anticipated.

The German ZEW sentiment measure was one of the first to foretell of the economic downturn. In January 2019, at -15 it shows that a broad cross section of German economic participants operating at close quarters with the global economy remain very pessimistic – this hasn’t changed, refuting Draghi. 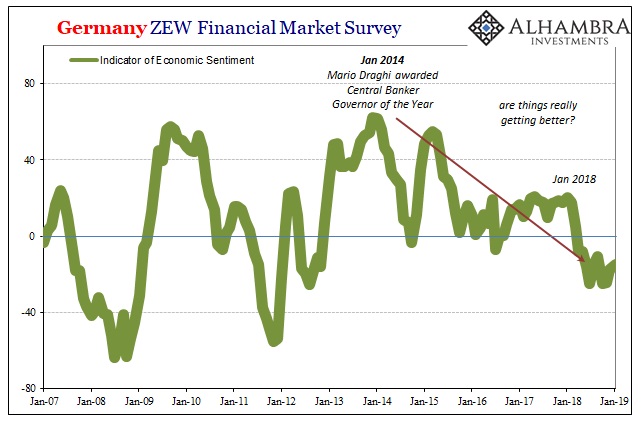 What has changed is the same panel’s assessment of Germany’s current economic condition. As sentiment remains low, the German economy is slowing to meet it not the other way around (the economy stays robust and sentiment improves over time as worries recede in a matter of Draghi’s transitory factors). 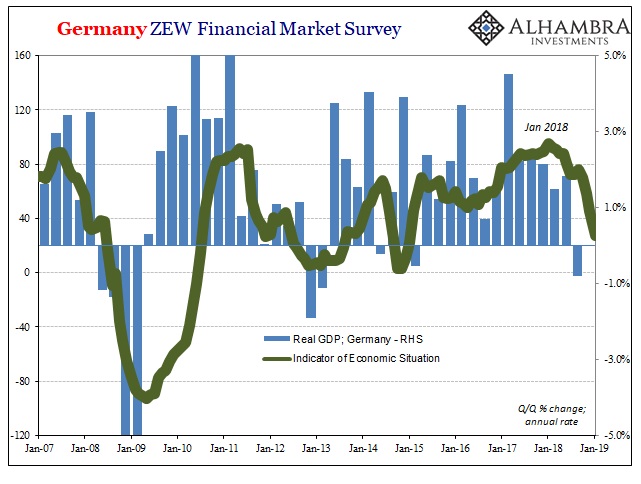 It is in every way reminiscent of 2011-12, soft data matching hard data already there. Officials will say this is “country specific” weakness, but does Europe really boom without its German center participating? That scenario is already doubtful, let alone the chances of one where Germany acts as a huge drag upon the rest of the Continent.

Besides, as noted yesterday, PMI’s and other data (such as IP) already show contrary to Draghi’s desperate wishing the downturn is established and broad. 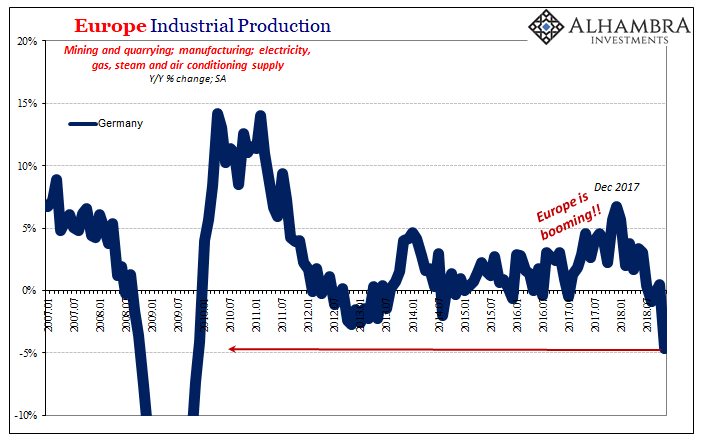 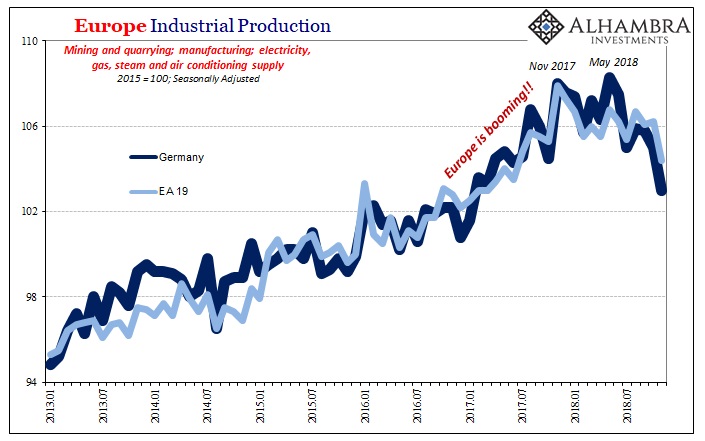 As the current seat holder, you can appreciate Draghi’s reluctance to admit to the substance of the problem he now faces. For those seeking to replace him, credibility will matter quite a bit more. Draghi will say transitory while the others are in the driver’s seat for the ECB pause.

All of which should begin raising questions about QE and what it accomplished. In the real economy, nothing. About the only concrete result attributable to it is just how messed up European money markets have become. They weren’t in great shape before the PSPP, they are surely worse now. 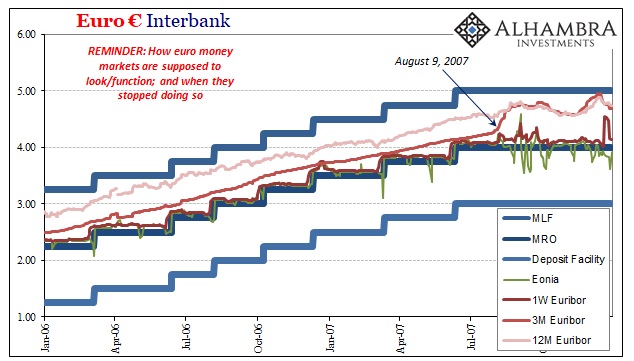 It’s been so long in Europe since money markets kept to working order, we often have to go back and show people how things are supposed to function. The ECB has three distinct mechanisms for controlling money market rates and making markets conform to its policy dimensions.

The Marginal Lending Facility stands on top, an actual ceiling (unlike IOER).

In the middle is the MRO, or Main Refinancing Operation rate. As a collateralized window, unsecured money rates such as Eonia (overnight) or any Euribor tenor should fall in above it. As you can see above, that’s how it used to be. After August 9, 2007, in euros as dollars and eurodollars, money market hierarchy has broken down.

This fissure was exacerbated by ECB policies that didn’t (couldn’t) solve the main issue – global monetary tightness in the form of balance sheet constraints. In Europe as the US, the central bank ended up flooding the banking system with useless, inert bank reserves. The result in euros was an ever-descending trajectory for “money” rates, first disobeying the MRO’s placement and before just dropping way out of line.

The lower they fell the more the media and central bankers themselves fell into the trap. Being described as “ultraloose” and “stimulus” what you find (below) instead is something very different indeed. 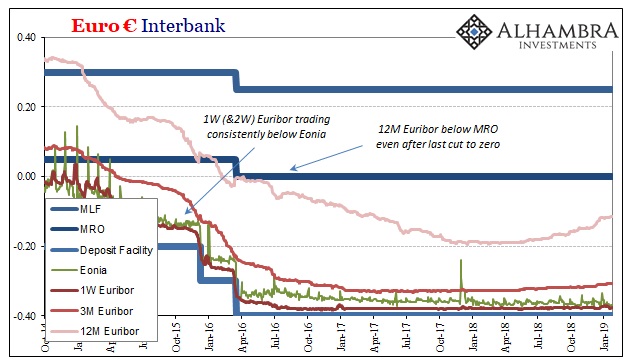 Banks dumped these reserves on these markets after filling up their current and deposit account ledgers; all of which works out to often highly negative “yields.” It’s the one thing central bankers don’t seem able to really grasp, why in the world financial institutions would be doing this and then keep doing this year after year after year.

The theory was simple enough; provide so much “liquidity” banks (Europe’s banking system represents and covers nearly the whole of the financial system unlike the US) no longer fear liquidity risk. No need to worry about another 2008, or 2011, did you see all those bank reserves! Having been reassured, they can get back to the big business of finance and economy

Economists, and every central banker is one, don’t seem to understand that persistently negative money rates are banks saying, “no, we aren’t going to do that.”

And, by the way, they haven’t. Lending remains at best slightly positive and in some places like the business sector (loans to NFC’s, or non-financial corporations) it continues to be a disaster no matter what the ECB does (or doesn’t do). 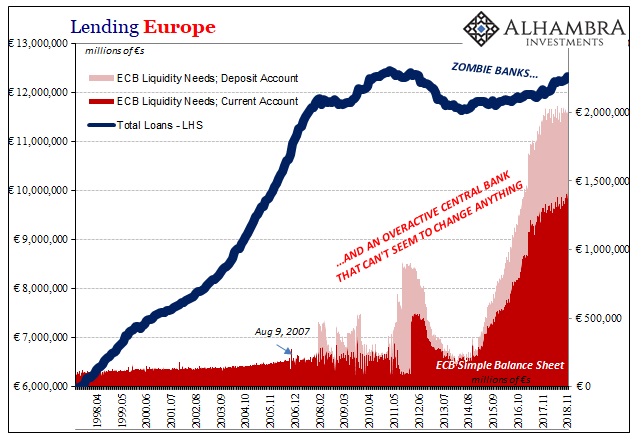 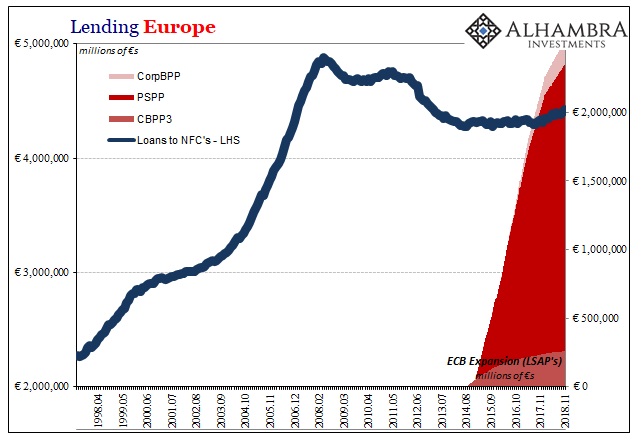 European banks would rather swap government bonds (and other assets) to the ECB picking up pennies on the transactions because it is predictable and tolerable, all the while holding trillions in bank reserve assets “paying” out negative rates, than they would lend into the European economy even a little. The risks are way too high, perceived liquidity risks primarily, and the returns far too low (no booming economy no matter what Draghi has said).

Persistently negative money rates are an enormously bad signal; there is no stimulus indicated here, and the last thing anyone should associate this stuff with is money printing. It’s all a third-rate magic trick designed purposefully to get you (you as in Europeans) to believe that something positive had happened. Because it is so complex and (purposefully) convoluted, you shouldn’t ask any questions about exactly what this positive thing was, so just take Draghi’s word for it. Politicians and the financial press do.

Economists put this all together in a statistical model and it works great. Expectations policy is supremely effective in academia when the variable it is assigned on the spreadsheet comes prefilled with a big positive number. Banks operating in the actual economy, periodically reminded of their own survival instincts, not so much.

In the real world you actually have to fix what’s wrong; trying to convince the world nothing is wrong can’t possibly succeed. Unsurprisingly, it hasn’t.

Milton Friedman had it exactly right. What we are seeing with so much uncertainty and Germany’s (or Japan, China, and around the edges of the US’s) stumbling economy is what I wrote a couple days ago:

It isn’t that the economy can’t manage slightly higher rates, rather the economy represented by low rates is prone to falling back again long before policy rates can get very far.

In Europe’s case, it is increasingly likely the ECB isn’t even going to get them off zero. QE was a failure but more than that it wasted so many years of everyone’s time, time that Europe more than anywhere could ill-afford. Populists in Italy, Brexiters in England, Yellow Vests in France, and Merkel on the ropes. This is QE’s real European legacy. 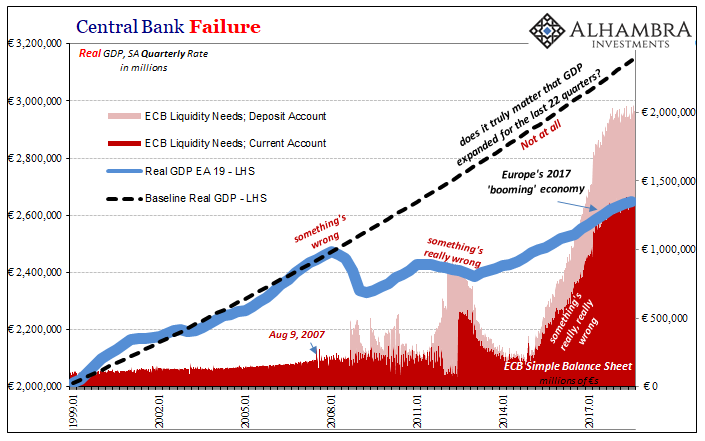