Explaining All The Facts

Explaining All The Facts

St. Louis Fed President James Bullard was in New York last week, making a presentation to the US Monetary Policy Forum. A well-known dove, speaking to CNBC while attending the conference, as a current voting member of the FOMC Bullard announced his dissenting view to the last “rate hike.” He was not eligible to vote in December, rotating into this situation at the beginning of this year just in time for this new dovish tilt.

I thought at the December meeting, myself I thought it was a step too far. I argued against that move. We did get a bad reaction in financial markets. I think the market started to think we were too hawkish, might cause a recession.

That’s the thing with these doves, they never explain this huge contradiction. Monetary policy is the center of the universe for these people, the central bank could not be more central. To them, it explains everything even though it can’t.

Since rate cuts and QE were so powerful, how in the world can anyone be so dovish after all this time and so much of it? The world wouldn’t seem to need more of it if it worked at all like it has been advertised. Not only that, if it is so effective how can just 250 bps of “rate hikes” (spread out over three years!) be sufficient to bring about very real fears over a recession?

For Bullard, that is the main issue currently; the rate hikes, not QT. Though everyone is talking about balance sheet normalization, for the St. Louis branch this is a minor bit of fine tuning. The subject of his presentation in New York was how QT isn’t really QT.

The funny thing is, Bullard comes awfully close to acknowledging the truth about monetary policy. It isn’t money printing; it isn’t even money. He makes the argument that QE’s powerful effects were instead accomplished via expectations. I could not agree more. Or, as former Dallas Fed President Richard Fisher admitted in early 2013, a monetary head fake.

This is how, according to James Bullard, QE can be massively effective while QT is, essentially, nothing more than accounting. 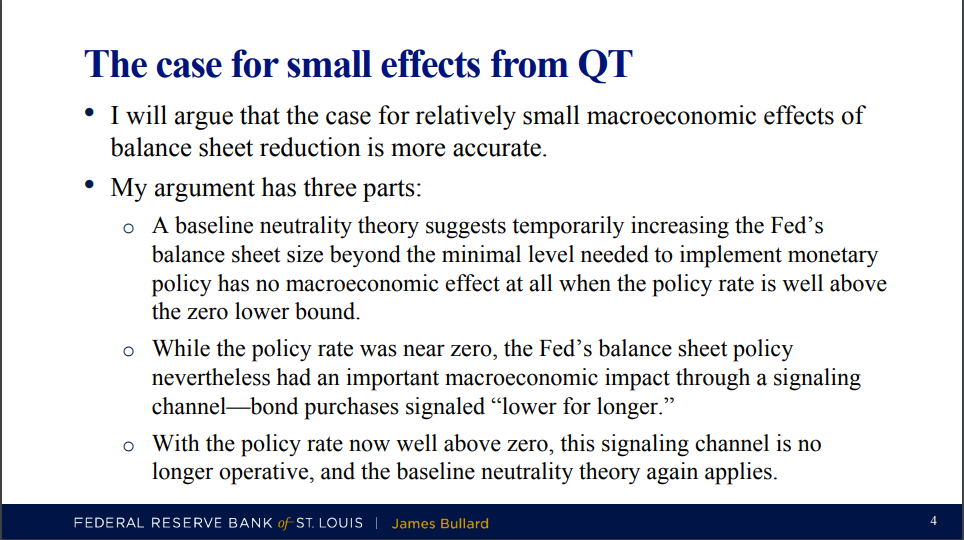 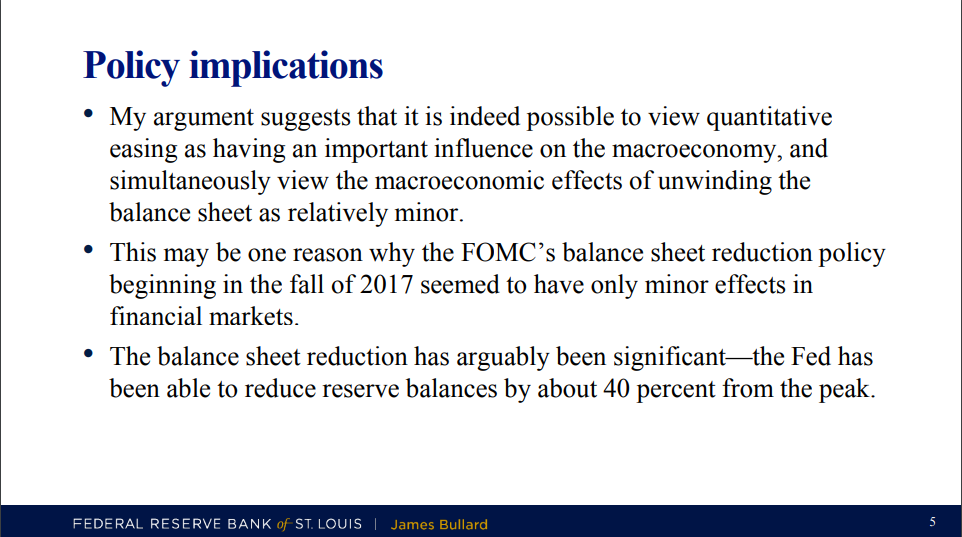 How, then, does 250 bps work out to recession fear? For policymakers, it is an extension of secular stagnation. They don’t call it that, of course, rather it is clothed in the CYA of R* discussions. Where once a policy rate could get up to 600 bps or better, in today’s economy 250 bps where R* is atypically low becomes tight by virtue of reasons never specified.

In other words, several suspected factors are holding back the real economy so that whatever today’s smaller input from the Fed can potentially hold much larger negative consequence for the real economy; except, obviously, QT which seems big but apparently, for Bullard, is small. It doesn’t really add up.

A separate and unrelated study published earlier this month by Ernest Liu, Atif R. Mian (of Princeton), and Amir Sufi (University of Chicago) attempts at least an explanation for R*. An exhaustive statistical exercise (as per usual), the authors look for this persistently weak economy in low interest rates themselves.

Traditionally, a lower interest rate is viewed as expansionary for the production side of the economy. Consider a typical firm making an investment decision. A decline in the interest rate, all else equal, increases the net present value of future cash flows leading the firm to increase immediate investment. This mechanism explains why the production-side relationship between economic growth and interest rates is typically negative in endogenous growth models.

That’s not how it has worked out, though. Over the last decade, interest rates seem like a trap – as James Bullard now alleges. The economy is so awesome because of powerful monetary stimulus but can’t tolerate even the smallest, more carefully laid out “rate hike” regime. Call it R* if you want, but something is missing.

Liu, Mian, and Sufi contend that the curve representing the production-side relationship between interest rates and economic growth is an inverted U-shape (Laffer curve-like). Interest rate policy, in their view, has a sweet spot; if rates drop below it, then the circumstance does more harm than good.

The reason they cite is increasingly monopolistic behavior across industries:

This paper introduces the possibility of low interest rates as the common global “factor” that drives the slowdown in productivity growth. The mechanism that the theory postulates delivers a number of important predictions that are supported by empirical evidence. A reduction in long term interest rates increases market concentration and market power in the model. A fall in the interest rate also makes industry leadership and monopoly power more persistent.

In other words, Milton Friedman was right about low rates. The paper’s authors don’t say it, nor would I expect them to have even thought about it. Still, what they find in their conclusions is every bit consistent with liquidity preferences due to a tight money constraint. The interest rate fallacy.

When money is tight in the real economy, as low interest rates propose, then those who find themselves in the enviable position of possessing effective money choose the safest, most liquid investments (Keynes called these liquidity preferences). When money is loose, they do the opposite foregoing safety for risk and opportunity.

In corporate markets, which one is which? Quite clearly, market leaders as Liu, Mian, and Sufi identify receive the best financial terms with an unending stream of credit at the expense of their smaller, less established therefore more risky competitors who struggle, relatively speaking, to secure financing. Competition is lessened thereby reducing the incentive for those leaders to invest productively; they fall back instead on harmful monopolistic behavior.

There isn’t enough money to be redistributed more equally.

The paper doesn’t mention them, but I would put stock repurchases right at the top of this list. Noting this clear correlation, it does note how, “The fall in long term rates has been associated with a rise in industry concentration, higher markups and corporate profit share, and a decline in business dynamism.”

Rather than try to explain a few of the facts in piecemeal fashion, as Bullard attempts, we can instead explain all the facts at once by stepping outside the orthodox box and into the monetary head fake. Tight money is disruptive to the economy supply side, for obvious reasons as well as these other channels. It is itself a trap, meaning that low rates become self-reinforcing in behavior as well as occurrence; especially since policymakers are under the delusion that QE for whatever reasons was powerful stimulus. 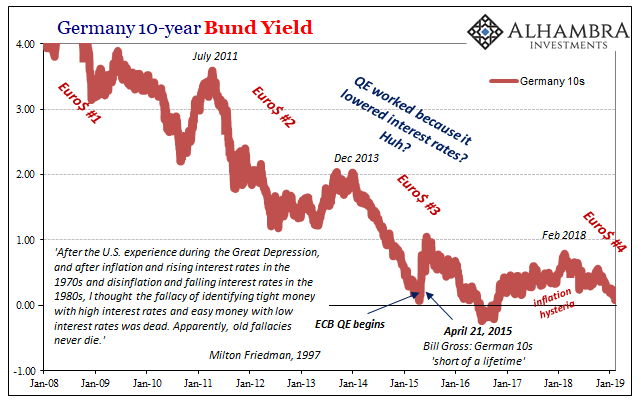 They welcome them as successful policy and therefore are not prepared for the negative consequences; some of which Liu, Mian, and Sufi detail.

The interest rate fallacy explains why neither QT nor 250 bps of “rate hikes” have much to do with recurring problems of recession-like periods. Focusing on monetary policy instead of the interest rate fallacy is itself an enormous fallacy. Therefore, policymakers can’t make heads nor tails from the situation. It shows, one day absolutely sure about an inflationary economic breakout and the next trying to figure how bank reserves (which didn’t matter to anyone before 2008) or 250 bps of federal funds (a market nobody uses and a rate for it that practically nobody pays attention to in operative practice) spoiled the party.

These are nothing more than attempts to reverse engineer how to get from their persistent assumptions about what they do to the equally persisting awful economic circumstances surrounding them. QE was awesome, but yet it doesn’t seem to have worked out that way. Not only is there no money in monetary policy, central bankers have no idea what interest rates mean. The first two presumed functions for every central bank are money and interest rates.