Not Surprisingly, It Wasn’t Italy

Not Surprisingly, It Wasn’t Italy

It’s so obscure now, I actually had to go back and reread what was going on there at the time. On May 29, the mainstream consensus was how Italian populists were screwing up Europe. Global bond markets were supposed to be selling off, massacred as global recovery took hold. Instead, worldwide the most liquid, safe instruments had been hugely bid for several weeks culminating with heavy buying on that particular day.

The new Italian government had tried to appoint euroskeptic Paola Savona as Finance Minister, a nomination which immediately triggered an EU backlash from Brussels. Giuseppe Conte resigned as Prime Minister once Savona’s name was withdrawn…and none of this actually mattered. Almost a year later, Italy’s political theater has disappeared but May 29 still sits prominently as a turning point on all the important charts. 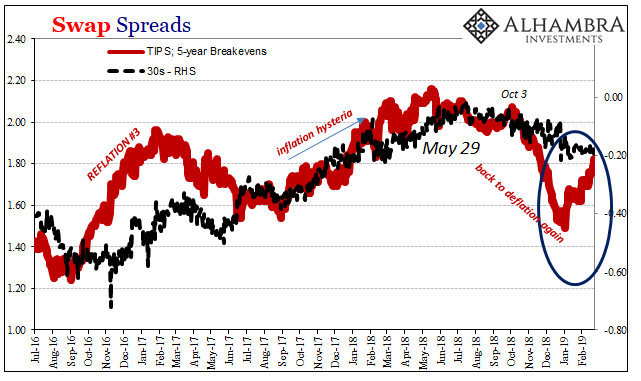 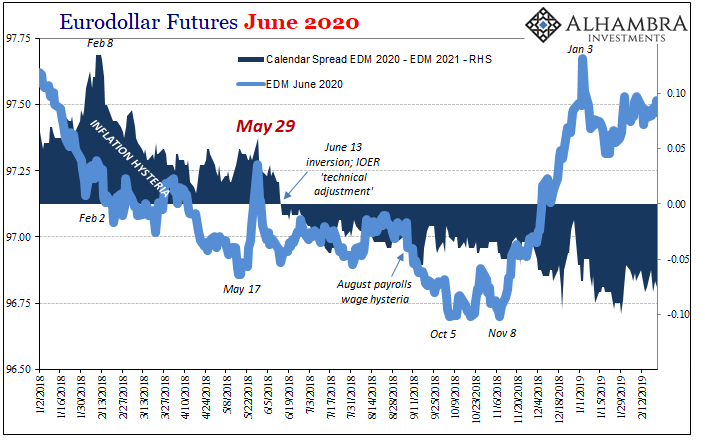 I wrote on that day how it was fragility rather than Italy kicking up this “strong worldwide demand for safe assets”, as the FOMC would later call it.

What is truly telling is just how quickly everything changed. That’s not Italy, that’s the fragility of this whole narrative from inflation hysteria to this boom that never was. There is no better example of it right now than Germany’s debt markets.

Of course, May 29 was no isolated episode; itself following up from the dollar’s sharp upward turn the month before during last April.

Just as April-May are clear inflection points in key markets, so, too, those months show up increasingly across econ stats in the same way. From Japanese industrial production (the first contraction since 2016, marked that way on the chart below) to Chinese auto sales turning decidedly negative for the first time in a very long time. May and afterward hasn’t been kind for globally synchronized growth. 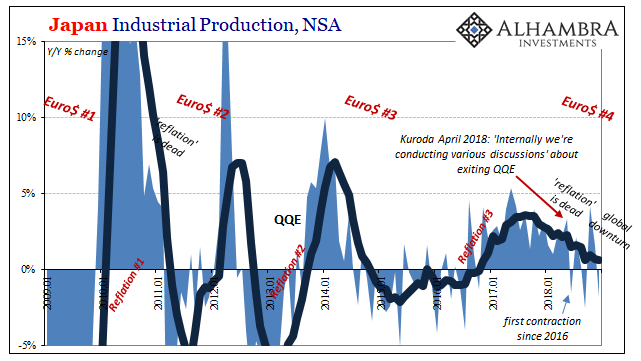 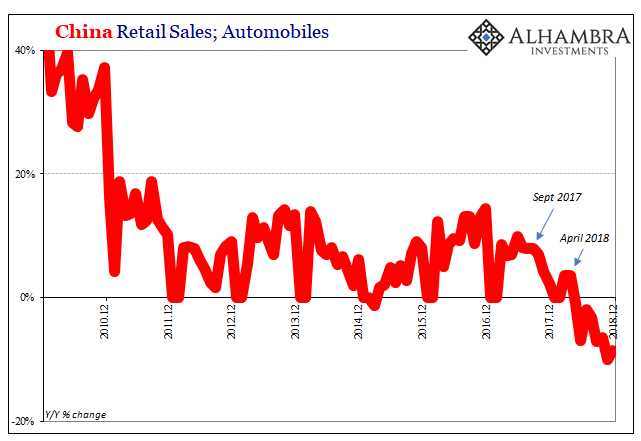 In fact, more and more it looks as if May was the point of no return, the beginning of globally synchronized downturn.

The US Census Bureau is still trying to catch up from the federal government shutdown. Today, the agency released wholesale sales and inventory data up to December 2018. On the sales side, activity is being directed at the margins largely by oil prices. As such, wholesale sales had tanked during that October-December window. 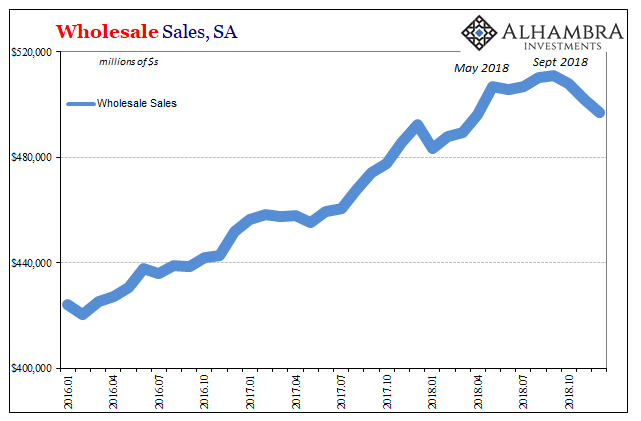 That doesn’t mean everything else in the US economy is good, though. Quite the contrary, even on the chart above you can easily detect and find where May 2018 falls in the data. When you remove oil prices, both up and down, the shift in circumstances (unrelated to Italy, obviously) suggests much deeper problems than just the WTI futures curve in contango. 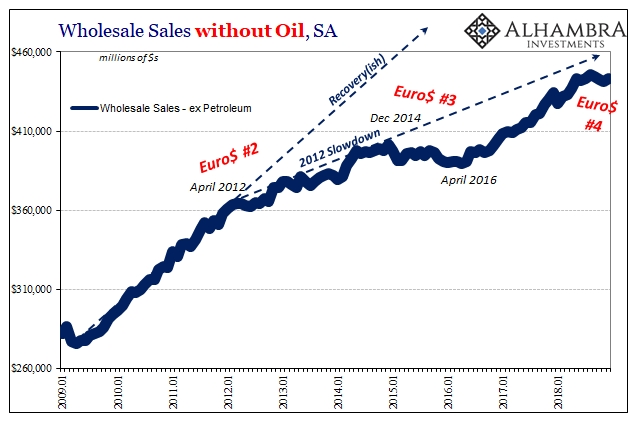 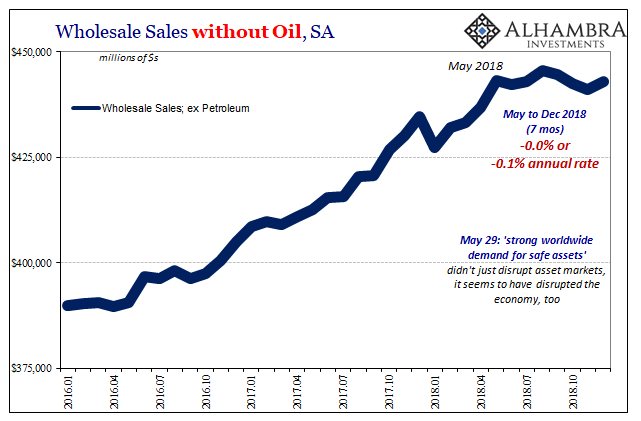 “Something” clearly changed after last May in the booming US, no less; markets as well as economy. In terms of wholesale sales, the final seven months to finish out last year saw no growth in them whatsoever. Non-petroleum sales were slightly higher in December, the opposite of overall sales impacted by oil prices, which brought the estimated total to slightly less than they were seven months before.

That’s a long time for no growth, suggesting, strongly, there was a real, non-statistical disruption behind the data. 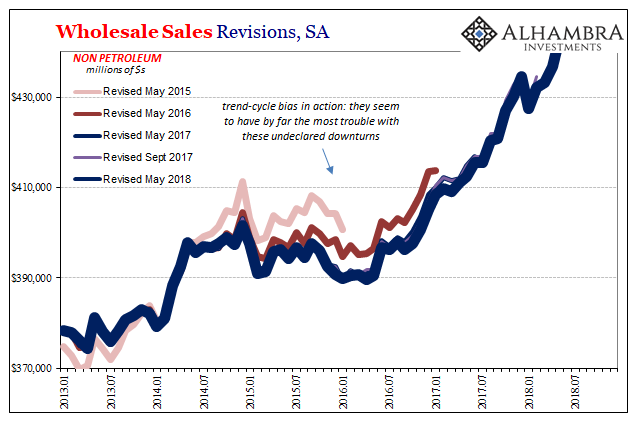 And it may be worse than as currently projected. As noted last week with durable goods, there exists an official bias to the figures that may be obscuring the dimensions of this downside. During 2015 and 2016, the exact size and depth of the domestic downturn associated with Euro$ #3 wasn’t known until years afterward when benchmark revisions were forced to reckon with these unconventional conditions.

We have to at least question that if the US is experiencing a similar type of downturn already, consistent with large market breaks observed both in April/May as well as October/November/December, it may be substantially worse than it appears in this kind of trend-cycle setting.

This is not a mere academic issue. Quite the contrary, we may have trouble figuring exactly what the US economy is doing right now but individual economic agents aren’t concerned about statistical construction. Whatever the actual level of wholesale sales currently, they have much bigger problems on their hands; we just don’t know how big. 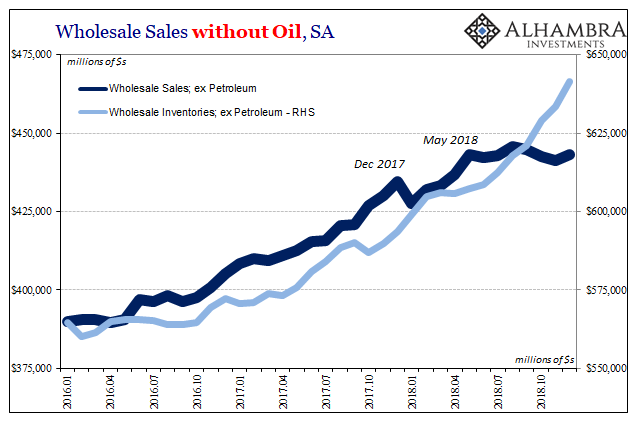 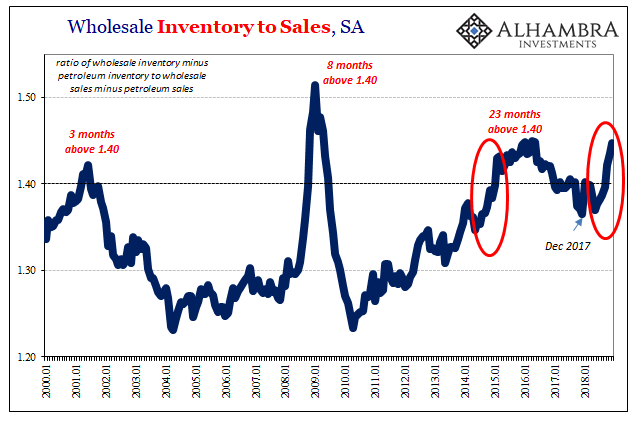 While sales growth at best disappeared, wholesalers kept up with inventory. Unlike wholesale sales, wholesale inventory hasn’t been revised during past downturns to nearly the same degree, which suggests that this sharp rise is more of a best case than not.

It is, essentially, a repeat of late 2014. Then, Janet Yellen was the Chairman and she kept constant to the same message as Powell uses (or did). And just like the beginning of that downturn, the dollar turned sharply higher for reasons nobody could explain (interest rate differentials or something) while activity especially in the goods economy increasingly and “unexpectedly” deteriorated.

Thanks only to subsequent data revisions, we now know today the extent of that contraction, though only if to backup negative market action apparent from Day 1 (including 2014’s “strong worldwide demand for safe assets”).

This sort of business cycle behavior still matters. A lot, actually. Too much inventory regardless of the reason acts as a dampener upon future production. Businesses left with excessive levels have to discount what they are stuck holding (deflationary), cutting into profits up and down the supply chain, at the same time they curtail orders for future products (see: durable goods, April 2018). 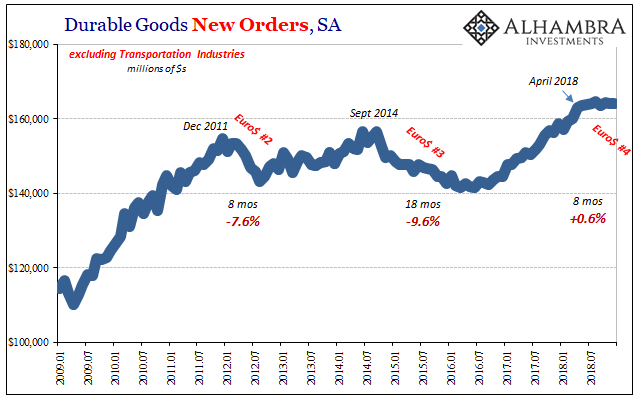 Looking back using the luxury of time, we more and more see this pretty uniform dollar disruption in the US economy as well as across the rest of the global system. We should all keep in mind Italy for it, though not for its actual contribution to the economic inflection (there was no contribution). Rather, as various explanations are put forward to deflect from this “something” each excuse will shortly be forgotten leaving behind only consistency with, and corroboration of, negative real-time market data.