A month behind schedule, Q4 GDP sure did disappoint. I don’t mean that it was disastrously weak, rather it came in right down the middle benefiting neither camp. The BEA’s not preliminary but not quite second revised GDP estimate for Q4 2018 was 2.55617% (seasonally adjusted compounded annual rate) above Q3. Not strong enough to dispel every growing worry, at the same time not weak enough to fully confirm them.

The BEA in making everyone wait an additional month settles nothing.

What is now established, though, is a mathematical fact. The last eleven years have been worse than the Great Depression. According to the updated estimates, using 2012 dollars as a reference, the current economy has underperformed the worst economy. 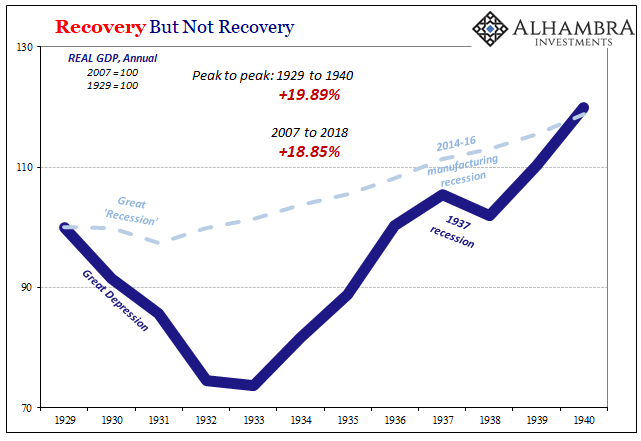 Most people believe this is an absurd interpretation, and it is in some ways. The last eleven years probably haven’t been nearly as bad for Americans as it was for their predecessors who lived through the calamity. But that’s not really the point. GDP is a simplified measure of economic progress which is suggestive of broad conditions.

Set aside the pseudo-precision that accompanies the number. The fact that it might even be debatable is itself cause for circumspection. The Great Depression was supposed to have been an anomaly, meaning that overall pattern wasn’t expected to ever be repeated; especially with seasoned Economists at the helm, many of whom made their name (Bernanke) studying just what went wrong during the thirties.

Thus, what GDP is telling us is that the current economy, whether or worse or not doesn’t matter. It is entirely too much like the one that never should happen again. 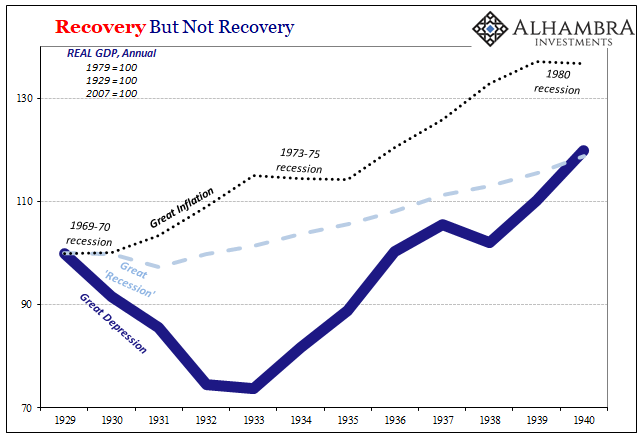 To put this into context, we need only compare both with another disastrous period of economic history – the seventies. The Great Inflation will never, ever be confused for a decade of prosperity and unquestioned advance. It was rocked by massive imbalances, too, courted by grave monetary incompetence at the highest levels (sounds familiar) and the result was nothing short of awful.

Somehow, though, according to real GDP, even after accounting for all the inflationary aspects of consumer prices the Great Inflation produced twice as much real growth as either of the other “greats” – even though its comparison period ends in recession during 1980.

Again, whether or not the Great “Recession” economy actually underperformed the Great Depression in non-figurative fact isn’t the issue. By every reasonable suggestion, the last eleven years rank among the worst in US history. This is what the “end of the 30-year bond bull” people never seem to understand; the two go hand in hand, low rates and objectively awful economy.

Ah, but that’s all about to change! After all, the hubbub in 2018, beginning in 2017, was that this was a new new era. If the “new normal” immediately following the contraction in 2008 and 2009 was stubborn malaise, then starting in 2017 after Yellen’s “transitory” stuff was magically transited to the memory hole we were back to a true growth paradigm again.

This was the substance of the claim to globally synchronized growth. Maybe belated, still a meaningful shift in direction.

In purely political terms, the Trump folks think they fixed the mistakes the Obama folks made (who were acting the similar premise of trying to clean up from the Bush folks’ mistakes). Tax cuts and deregulation, we were told, meant there was a very different background this time around.

Therefore, 2018 was the best year in thirteen years! Boom confirmed? 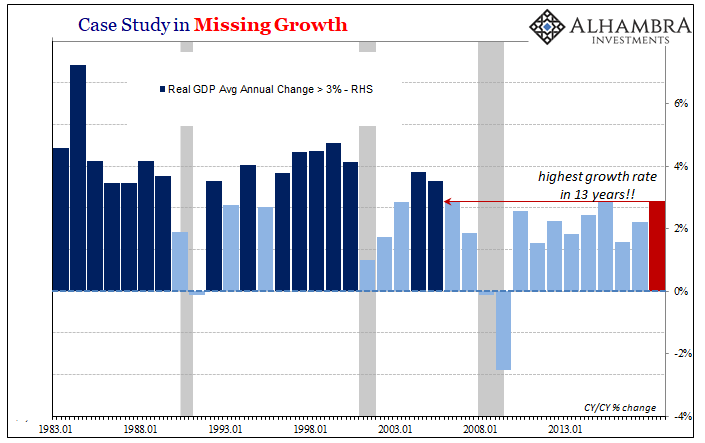 Not quite. No wonder there was a concerted effort to shift toward blaming the Fed. It is definitely the greatest number but it obviously isn’t meaningfully different. The least worst doesn’t actually count as good, which if you were thinking tax cuts were going to be the answer you have to be horrified by the lack of GDP result.

Rather, what 2018 GDP suggests is that nothing really had changed. Even if you believe tax cuts were economically helpful (there is a very good argument for tax reform, it just doesn’t have much to do with “stimulus”) if all they amounted to was three one thousandths of a percent more than 2015, they didn’t really accomplish their economic mission. 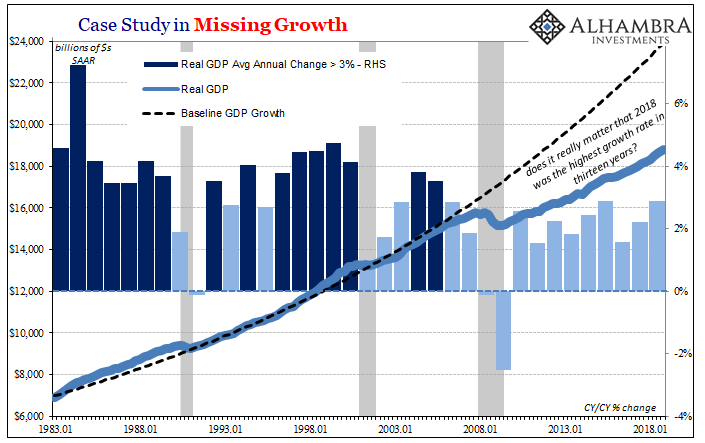 If there has been a booming economy somewhere over the last eleven years, it just doesn’t register as what anyone should reasonably, honestly consider as one. This is why focus has turned toward the more forward-looking indications which raise substantial questions for 2019.

That already proposes last year’s boom was missing all the necessary qualities. If the economy had finally found its footing, there would be no questions about this year. The only query on anyone’s mind would be something along the lines of Jay Powell – just how good will it be. He doesn’t even talk that way anymore.

During the best year in thirteen years, the man was the hawkest of hawks. Starting off 2019, though, he’s a paused chicken dove talking about “some crosscurrents and conflicting signals.” 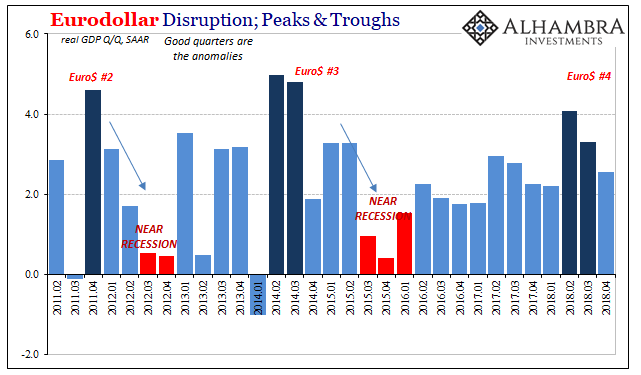 We are left to consider what 2.55617% might suggest in the context of the rest of the global economy tailing off, even contracting already in some places. Is that a stable if low-level of growth? Or does it confirm slowing, like early 2015, with the ultimate destination of that deceleration unconstrained on the downside?

The BEA gives us nothing conclusive. An actual boom would have been. More of the same means vulnerability to financial meaning monetary disruption. Therefore, despite this economic “achievement” it’s not really being celebrated like it would have been had 2017 come out on top.

I can only imagine last year’s inflation hysteria had GDP been the highest in twelve years. That’s the point; we can now very easily see how it would have been ridiculous, even with Q4 coming in right down the middle. It may add up to a few decimal places better than other bad years, this still doesn’t equate to an escape.