Not Buying The New Stimulus

Not Buying The New Stimulus

What just happened in Europe? The short answer is T-LTRO. The ECB is getting back to being “accommodative” again. This isn’t what was supposed to be happening at this point in time. Quite the contrary, Europe’s central bank had been expecting to end all its programs and begin normalizing interest rates.

The reaction to this new round was immediately negative:

The euro and euro zone government bond yields fell sharply on Thursday after the European Central Bank changed its rate guidance while banking stocks tumbled as a fresh round of cheap loans was less generous than previous packages.

I don’t think that was actually the case; the reason for today’s pessimism, I don’t think, wasn’t how the T-LTRO was “less generous than previous packages” or anything at all to do with “rate guidance.” Rather, perhaps it was the very fact Draghi is proposing anything after a very long time claiming, enthusiastically, how Europe’s economy was absolutely booming. Today was a really solid sign how that can’t be the case. 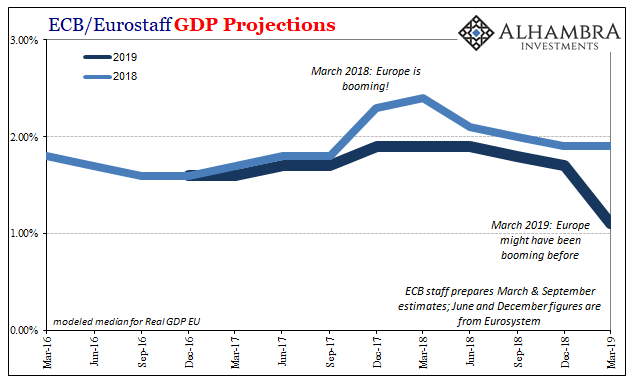 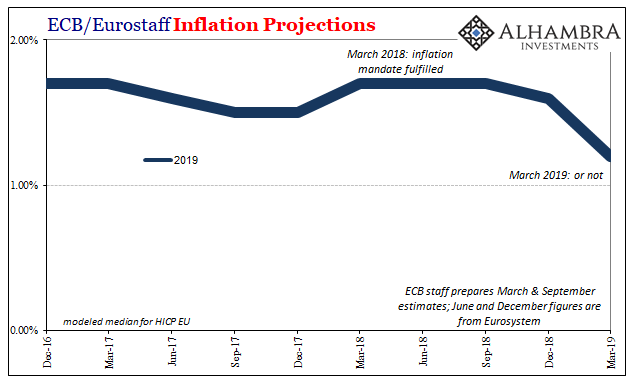 The danger, from the central bank perspective, is when you shift unexpectedly in the “dovish” direction some might get to wondering why. This peril is heightened when expectations have gotten so far out of whack. From early 2018 to early 2019, from “this is inarguably awesome” to “now we are worried.” That might not sit well when it finally comes out.

If even the most optimistic among us, and central bankers have a lot riding on the idea of recovery, are suddenly not optimistic at all, maybe it doesn’t matter how much in any T-LTRO is offered. What does is the mere fact the ECB feels it necessary to pledge anything whatever the amount.

And that is another related, very important angle. The background for all of this isn’t exactly what the boom narrative has said. What the ECB proposes today is actually the third T-LTRO. The second was launched in March 2016, about €700 billion. The first dates back to June 2014, nearly five years ago. Cannibalizing what I’m going to write elsewhere for tomorrow:

If you keep repeating “stimulus” so that, before you know it, half a decade has flown by and you are still launching and relaunching the same policies, you aren’t doing it right. It cannot be stimulus, you have instead wandered right into Japan’s trap.

That, too, might’ve been considered in today’s negative reaction. I don’t know if we are there yet, or even close, but at some point enough people were bound to get the sense these people have no idea what they are doing.

What do you do if you find yourself, as a policymaker, in that situation? More likely than not you keep repeating what you’ve already done. If you’ve made it this far… 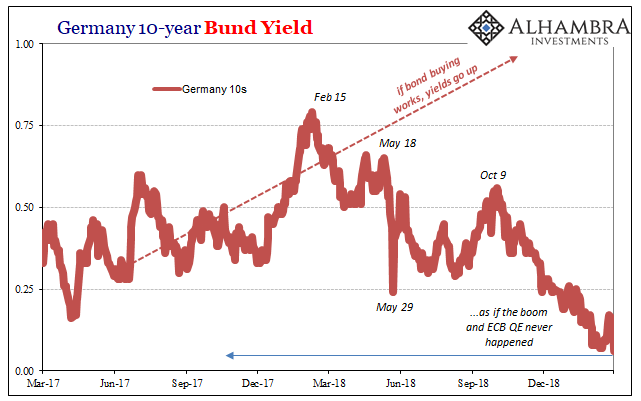 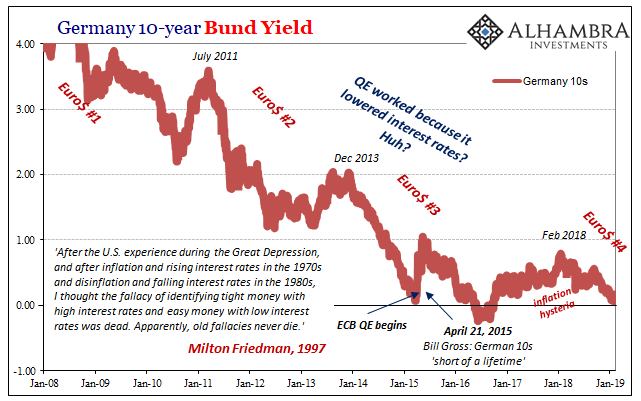