More important than the US GDP number, more substantial than the February jobs report, what will linger for longer in the public consciousness is China’s trade data. It seems as if the big drop in exports has garnered the most immediate attention, I suspect that won’t be the case moving forward. There are more important trends being captured where the data wasn’t so splashy.

The month of February is always a tricky one, what with Golden Weeks moving around every calendar. As such, the latest numbers are skewed at least on the one side.

Compared to February 2018, China’s exports in February 2019 came in 20% lower. That’s a big negative number, obviously, the worst since February 2016 and among the worst in the series. However, exports in the preceding were monumentally out of whack, adding substantial base effects to whatever calendar skews. Combined, January and February together, Chinese exports were up 2.4%,

That’s a bad result, not indicating much that’s good about external demand, if not quite as shocking as -20%. 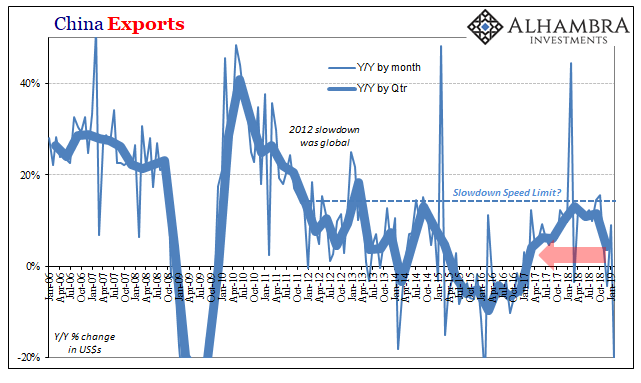 The real concern is on the import side. As a monthly change, -5.2% in February doesn’t seem all that bad especially considering all the same factors. Rather, you see the problem very clearly in what is now a continuing negative trajectory. Imports are down each of the last three months, compared to 20% growth (which was already low) previously.

The timing also grabs one’s attention; the very clear shift in economic activity registers right during that same window we’ve been talking about. October-December was a global market shakeup, and here are the Chinese establishing yet again what was certainly the real economy impetus behind it. 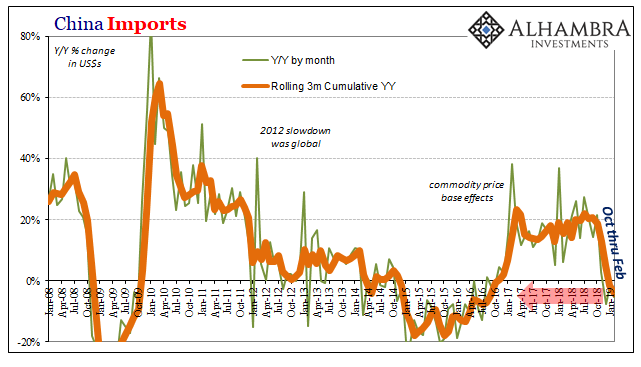 Only, it hasn’t stopped. Whereas some minor reflationary sentiment has crept back into things in January and February (a little less so later in February), some hope about monetary pauses or whatnot, Chinese demand for foreign goods has not rebounded.

A lot of the rest of the world economy, at the margins, depends upon China for underpinning development. That was one of the areas of concern even during 2017’s globally synchronized growth. Even at the Chinese best, it wasn’t nearly sufficient to really get things going again. There was some snapback in activity after the huge plunge in 2015-16, but just enough to leave the distinctive “L” shape. 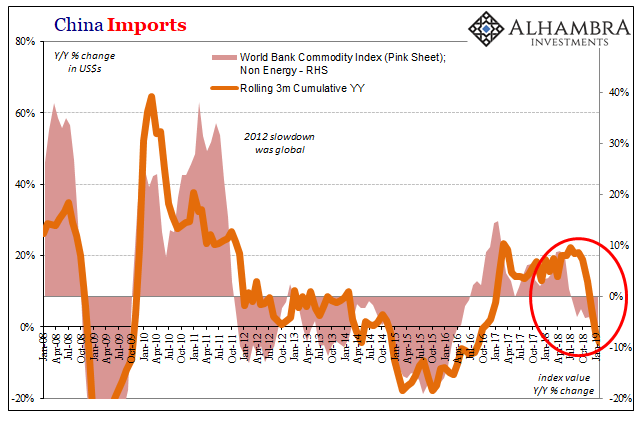 Even though the scale of the contraction here is low to mid-single digits, it represents a big change in direction. This is made all-the-more negative given the shock in terms of expectations; even during the middle and later months of 2018, before last November, there remained a pervasive belief that at most the global economy might slow.

In the space of maybe six or seven months, everyone goes from huge global boom to maybe some slowing to China is outright contracting. And is still contracting after the full reach of its New Year holiday.

The effects have already been profound; the ECB yesterday singling out weak Chinese demand for it having to unleash a third (absurd) T-LTRO in place of a booming monetary policy exit. The OECD did the same when downgrading its forecasts for the global economy.

So, what is China’s problem? There’s trade wars and record (misleading) Total Social Financing, confusing monetary policies where banks are issuing bonds that are really equities and the central bank is swapping them for bills that are bonds but belonging to the central bank. There does seem to be a confusing mess coming out of Beijing.

All that stuff is just various symptoms. I’ll refer once again to what I wrote right at the outset of the October-December window:

The PBOC is actually telling us that they expect in the months ahead the same or perhaps bigger commitment to “stepped up support.” CNY doesn’t need support if there is no worsening “capital outflow” situation of retreating eurodollar funding.

On a rolling three-month basis, Chinese imports were averaging 18% growth up to and including October. On the same basis in February 2019, -4.3%. It’s not a result skewed by the holiday. That’s a substantial, categorical shift in economic circumstances, all-too-consistent with the following: 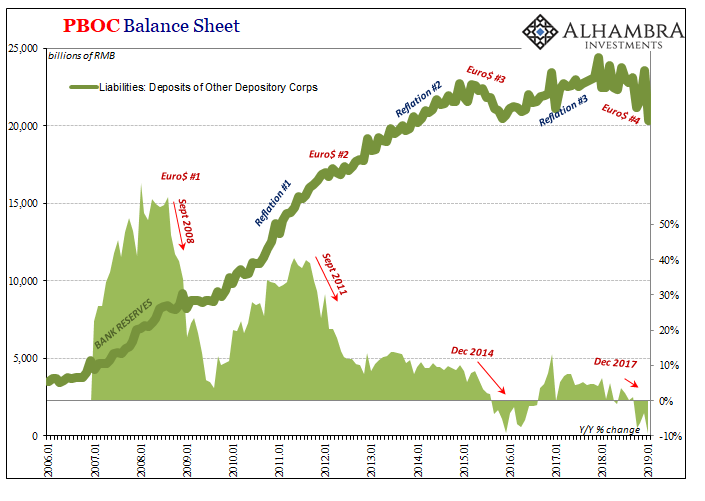 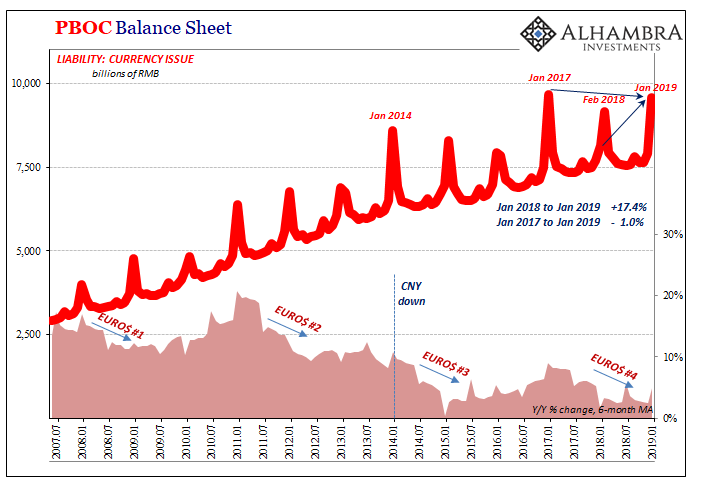 Much more than US GDP or payrolls, Europe’s LTRO’s (naked, or with a T) or Jay Powell’s chicken pause, Chinese demand for foreign commodities and goods more than suggest this thing is just getting started. What it actually might be when all is said and done, we don’t know. But the probability of just bouncing off a small, temporarily annoying global soft patch is very much diminished with China spreading this kind of persisting disorder and distress throughout the rest of the world.