Where Doves Are Dreaded

Where Doves Are Dreaded

If “rate hikes” and QT are the world’s big problem in 2019, then why is the FOMC announcing the end of “rate hikes” and QT failing to have a positive effect? The answer will surprise most people. Central banks, dominated by central bankers who are Economists, meaning statisticians, are always behind. They do not lead.

Monetary policy, which has no money in it, is reactive rather than proactive.

Pay no attention to that inflationary boom Jay Powell spent the first significant portion of his tenure describing. It’s all gone. He said that the labor market was so strong it would force the Fed to get more aggressive, farther and faster in terms of those hikes. Forget about all that.

The latest FOMC meeting was conducted, apparently, like 2018 never happened the way they thought. Officials at least got that much right, belatedly. 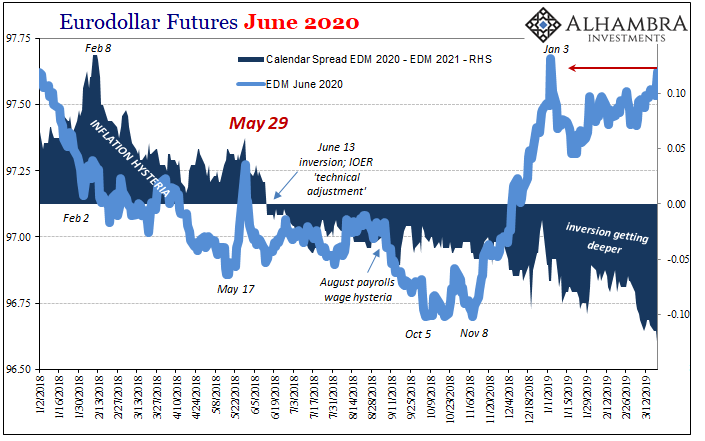 In other words, for months on end while markets were betting, strongly, how he was dead wrong, Powell continued in public fully confident anyway. The FOMC even made specific mention of “strong worldwide demand for safe assets” implying how they were mispriced since they were going in the wrong direction. How about now?

It came to a head around September when the August payroll reports came out with (supposedly) inflationary wage gains.

Nominally, the bond market sold off, nominal rates and expectations moved up, not because the market bought the scenario rather the market figured Jay Powell did. That’s what the inverted curve initially said – the Fed was going to keep on going past the point when obvious economic distress had materialized. Inversion said however far the FOMC would manage to go with them, it wouldn’t be too much longer before they were forced give up and begin thinking about going back in the other direction.

And now here we are. The Fed is on board last year’s slump. That must’ve been what Powell was using the word “strong” so much about, a strong slowdown. 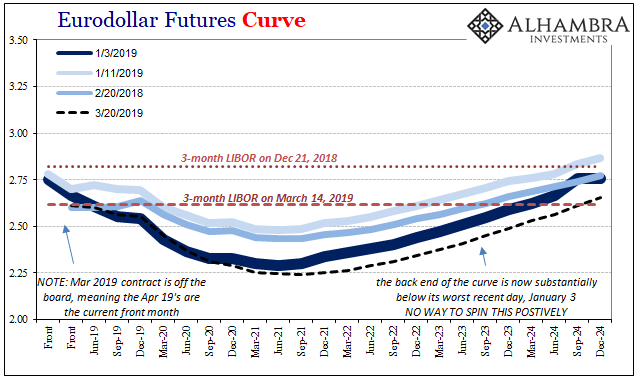 Forget the “dots”, they are the meaningless expressions of statisticians who unrealistically forecast their own reputations. This thing, this other economic thing, is really starting to get serious now. Even policymakers get it.

This was always the danger with the Fed “pause.” Some people, those who despite the mountain of evidence indicating otherwise continue to believe central banks are central, would have been relieved at fewer rate hikes and an end to pesky QT. Others, however, would start to wonder more completely about all this. I wrote a few months ago:

Can we stop with all the “rate hikes are causing this” nonsense? The upper boundary of federal funds is currently 2.50%, hardly any sort of hardship on anyone anywhere. If 250 bps is the cause of so much fright and angst, how in the world did the world function when risk-free was 6% or better? You might even notice that the economy did function so much better when interest rates were higher (interest rate fallacy).

Something big changed between 2017 (three rate hikes) and 2018 (four rate hikes) and it wasn’t the extra 25 bps. The global economy isn’t going to be sailing into globally synchronized growth with federal funds around 150 bps and then on the precipice of full downturn with the addition of just 100 bps more.

The strongest economy in decades would never have been cut off by another 1%, at least if it was actually strong in any realistic sense.

By being behind the progress of events, Jay Powell has tipped his hand. They see it, too. The Fed didn’t save the economy from getting worse, today has instead confirmed that the economy is already heading that way and has been for some time. That’s why you see the knee-jerk negative reaction in markets today to what, by mainstream account, should have been a dovish celebration.

Ben Bernanke’s transparency is now Powell’s curse. Bernanke saw the modern central bank, the one operating quite purposefully out in the open, as a tool for more efficiently accomplishing its goals. The more people saw of what the Fed or ECB was doing the more assured they would be in its effectiveness.

He never thought about the opposite case, even after 2008, because Bernanke was a true believer in econometrics. Give it enough time and everything will go the way the models predict. Jay Powell hasn’t that luxury, between Yellen and Bernanke they squandered an entire decade.

Thus, when confronted with a setback monetary policy is revealed as to its true, moneyless nature. The Fed pause and QTT (quantitative “tightening” termination) were both meant to help calm markets and the economy, when instead they together verify what markets have (for a while already) feared about the economy. Officials must be spooked about something.

Rate of change is all that matters: if the most optimistic of optimists is no longer so optimistic in word and action.

Not only that, substantial risks must lie ahead and what can the Fed realistically do about them? For one, as the pattern establishes, there is almost no chance it will act until long after these risks become materially obvious. Through most of the market turmoil in December Powell clung to his strong economy nonsense. It wasn’t until afterward when it became absurdly obvious that suddenly he, and they, shifted. 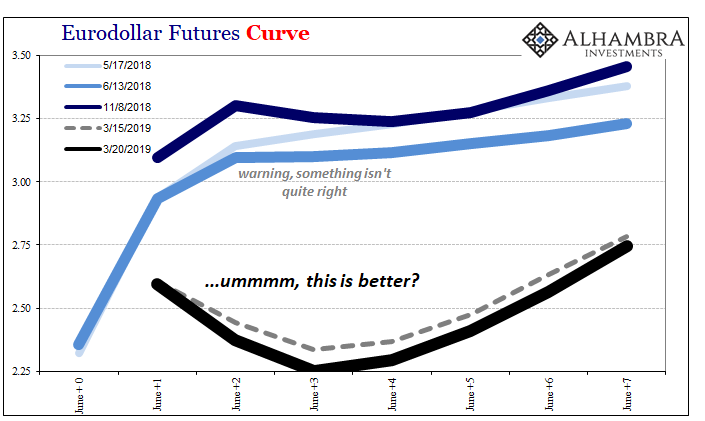 Again, reactive policies. Even if you thought there was some positive benefit to monetary policy, at best it doesn’t get applied until after whatever happens happens.

Couple that realization to EFF just 240 bps, a pretty low level, and its more than enough to doubt whether the Fed matters much at all either way. Especially with the 5-year UST trading today at 233 bps.  Powell is a bystander, and not a very astute one. That proposed standing repo facility (QE5) takes on an entirely different official tone today.

Where dovishness is dreaded: sorry about saying the economy was awesome, we regret to admit it really wasn’t.