Confirmation that it wasn’t a shallow Rhine and emissions regulations. Something big is going on in Europe, Germany first. And if the German economy stumbles, particularly its industrial and manufacturing sector, we can reasonably infer its cause – the entire global economy is suffering.

As is standard practice, when weak data began showing up last year it was attributed to anything, everything else. Europe was downright booming, they said, so there was no possible way for a macro negative scenario. If something had hit Germany, surely it was a transitory distortion traced to the lack of rain in central Europe easily cleared up given a few more months.

IHS Markit’s PMI’s for March 2019 were all bad in Europe, Germany most of all. The latter’s manufacturing index was put at an alarming 44.7, down from 47.6 in February. It was the first time less than 45 since the 2012 re-recession. The composite figure, incorporating the services side, was just 51.5, the lowest in 69 months.

In Markit’s write-up, though, for some reason the boom still makes an appearance in the introduction, at the very start of the second paragraph:

March saw private sector business activity in Germany rise only modestly and at the slowest rate for almost six years, according to the latest PMI® data from IHS Markit, with the report indicating a deepening downturn in the country’s manufacturing sector. The first monthly fall in employment at goods producers in three years meanwhile saw the overall rate of jobs growth ease to the lowest since May 2016.

At least service sector output prices are up, good thing. Manufacturing is at recession levels but “solid domestic demand” prevails.

As is the case in all downturns and recessions, it is the manufacturing sector which plunges first. The service sector aims to follow because a lot of what goes on in it has to do with the management and movement of goods. Fewer new goods are ordered, fewer then produced, eventually requiring fewer services to manage and move them.

Over in France, that country’s composite PMI fell back to 48.7. The manufacturing index retreated to 49.8, with the service sector already sharply underwater (48.7). To its credit, Markit doesn’t write about the Yellow Vest protests while practically everyone else blames them for France’s deepening economic woes:

A key factor behind the reduction in business activity was a fourth consecutive monthly decline in new business. March’s contraction in new orders was moderate overall but quicker than in February. The rate of decrease was consistent across both the manufacturing and service sectors.

Forward-looking indications are all negative, Germany and France.

For Europe as a whole, the manufacturing PMI came in at a 71-month low (47.7) obviously dragged lower by the German mess. The composite was 51.9. 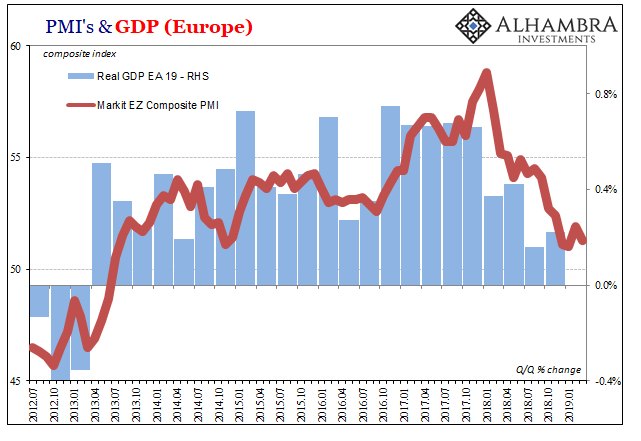 Europe isn’t the only place where manufacturing declines are showing up. Just as Germany is a bellwether for global trade and therefore global economy, Japan is in very much the same situation. Export-oriented, if Japan Inc. isn’t making new goods that’s because the rest of the world isn’t demanding them.

Nikkei’s flash March 2019 Japan Manufacturing PMI was 48.9 for the second straight month. There is no turnaround yet in sight one quarter of the way through 2019.

Further struggles for Japanese manufacturers were apparent at the end of Q1, with latest flash PMI data showing a sustained downturn. Slack demand from domestic and international markets prompted the sharpest cutback in output volumes for almost three years. With input purchasing falling, firms appear to be anticipating further troubles in the short-term.

Given all this, it really is no surprise that Germany’s federal 10-year bund was negative again. At -1 bps in “yield” today, these benchmark bonds hadn’t been under zero since October 2016. In truth, they never really “reflated” that far in 2017 before Euro$ #4 caught up with them in 2018. There was no boom.

But there is a downturn. It’s here and has made its appearance known in key places. 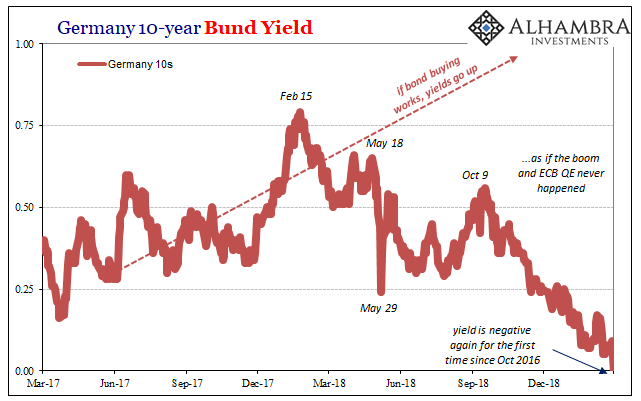 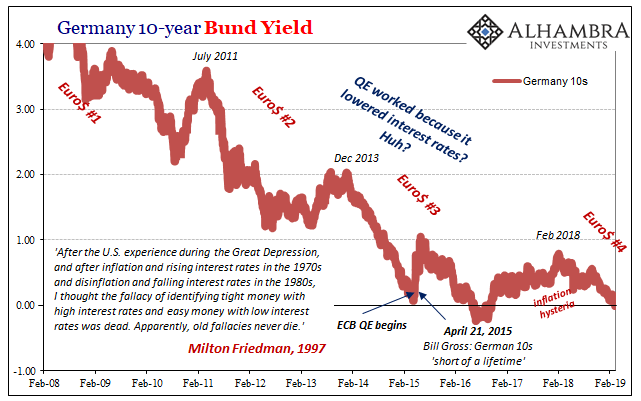