In a way, the government shutdown couldn’t have come at a more opportune moment. As workers all throughout the sprawling bureaucracy were furloughed, markets had run into chaos. Even the seemingly invincible stock market was pummeled, a technical bear market emerged on Wall Street as people began to really consider increasingly loud economic risks.

There had been noises overseas, troubling indications that had gone on for some time beforehand. Typically dismissed as Brazil being Brazil, or strictly European factors which apply to strictly Europe, there had been some softening in US data as 2018 drew to a close. Right when uncertainty was reaching a boiling point, the data flow stopped; shut down.

And so, everyone was left to fill in their own scenarios. Was the US economy really decoupling? Or, had weakness penetrated what was claimed to be an unrivaled boom?

Slowly, the statistics have been trickling back into focus, the various agencies almost all the way caught up. In the meantime, markets have really diverged: share prices have nearly rebounded all the way from what was lost while bond markets, curves and nominal placements, have plunged some more especially recently (before today).

The Census Bureau has performed double duty of late, finally getting one important data point fully back up to schedule. Retail sales for February 2019 leave little doubt as to which way the US economy had turned.

One of the first post-shutdown reports was a truly upsetting setback in retail sales for December 2018, the very height of the retail industry’s business calendar. Those numbers were then revised lower still, followed by a modest rebound in January 2019 which are now revised upward. 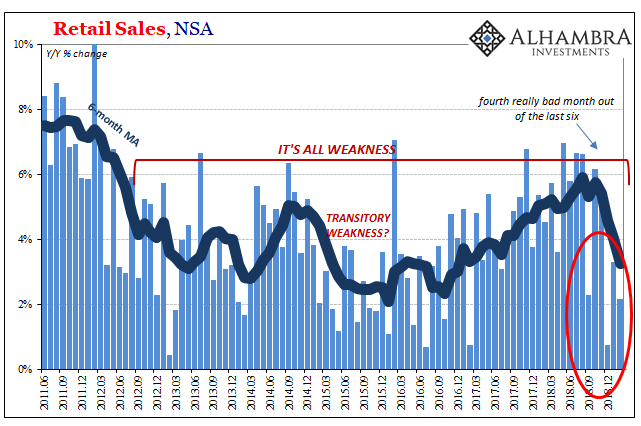 That means four out of the past six months are pretty bad ones, the kind that in the past clustered during previous downturns or even recessions. Year-over-year, unadjusted, retail sales rose just 2.16% in February. January was revised upward to a still recession-level 3.31%, while December remains at around 0.74%. The downward slope in the 6-month average pretty much tells the tale.

And while gasoline and oil prices have certainly made their mark during this deceleration, the slump is broad-based. Excluding retail sales recorded by gasoline stations in February, consumer retail spending increased by just 2.6% year-over-year. The weakness is apparent no matter oil prices. 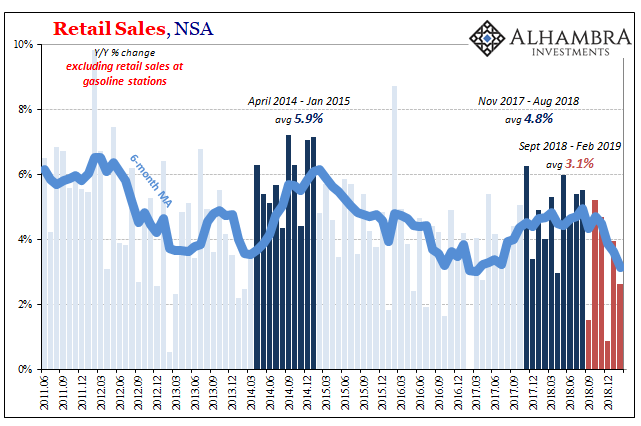 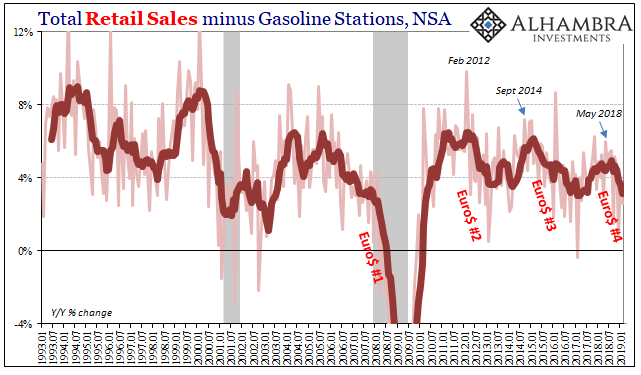 The seasonally-adjusted series describes rather well what seems to have happened. Just as the global economy began exhibiting signs of weakness, particularly after last May (May 29 wasn’t just prominent on price charts), US consumers began to behave in similar fashion and at practically the same time. Though officials and mainstream commentary kept up the constant drumbeat of a booming economy, it had already reached what is now a clearly established inflection: 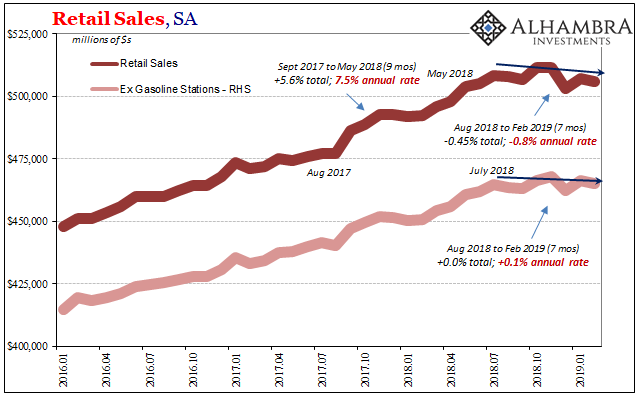 That’s a nine-month slump, seven-month contraction, which is plenty long enough for any statistical doubts to have been satisfied. And since it shows up with and without gasoline sales, this not merely a function of WTI.

The numbers are pretty stark, particularly these last seven months (through February 2019) dating back to August 2018 (it wasn’t hurricanes after all). Seasonally adjusted retail sales in February were 0.5% less than they were last July. That’s an annual rate of -0.8%, which is much worse than it sounds. 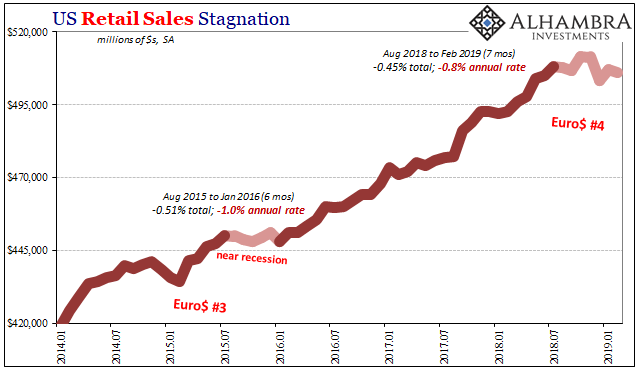 It’s already one month longer and about the same depth as the second phase of Euro$ #3, the one beginning August 2015 (CNY plunge) that would push the US economy to the precipice of recession.

In the retail sales series, this kind of prolonged decline is pretty rare. Some of the more recent annual rates are already among the worst in the series history, particularly December. During the dot-com recession, for example, retail sales continued to expand at nearly a 2% rate before and during most of that cyclical trough. 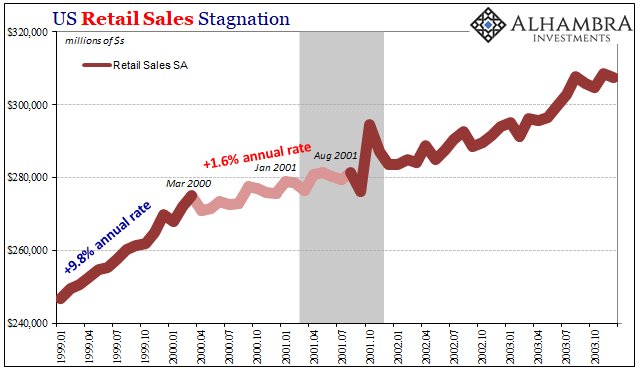 In other words, this current period at least as it pertains to US consumers is already in really bad company before we even get to considerations over further depth and duration.

This would obviously explain the market behavior up to December and early January (bonds and money markets were witnessing the real behavior of real economy participants in real-time as things were going from uncertain to bad; for stocks it was the utter shock of seeing the bond market turn so negative when expectations had been set for nothing but huge positives). The question moving forward now that the US has been shown to be a full participant in the global downturn, is, obviously, what comes next?

Stocks are trading as if this renewed (surely) coordinated central bank dovishness will prove effective; though the entire global economy hit a landmine during that particular window, disappointing to be sure, for the optimistic-minded it’s all in the past. Conditions will only improve from here now that monetary policies are favorable again. The Fed broke it; they’ve now fixed the error so nothing more to be worried about.

The bond market, and eurodollar futures, isn’t so sure. First of all, it was this view which had prevailed in the debate over global growth in the second half of last year. Seeing the Fed taking things a step further, several rate cuts on horizon, this would require more than just what’s already been recorded on the downside. To get Jay Powell to complete the entire U-turn, domestic weakness will have to be more substantial still (policymakers really do require a robust slap in the face, as December proved just to get to this Fed “pause”).

In terms of strictly retail sales and US consumers, these are already bad and it doesn’t appear due to some mishmash of idiosyncrasies. There is too much consistency with what is going on in the rest of the world. The general pattern has been laid out far too many times in recent years, as I described many months ago back in September:

Last year to this year, it has gone: globally synchronized growth, decoupling. What comes next?

Well, we have our answer. The government shutdown had the practical effect of stringing along US decoupling a little bit longer at least in its narrative format. Now that decoupling has been shown once more to be a silly idea, the window shifts toward globally synchronized downturn. Bonds are of the opinion this isn’t good no matter what, while stocks are betting it is already past tense.

The only thing that really is, besides the government shutdown now, is economic decoupling. 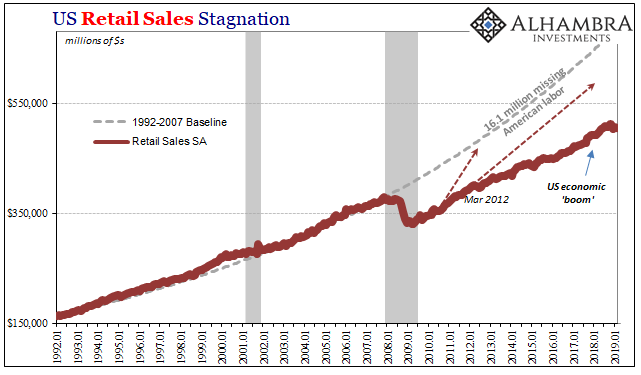