It is, if you haven’t noticed, that time of year again. ‘Tis the season for green shoots. In the Northern Hemisphere, winter gives way to spring. The flowers start to bloom and humans living here are naturally optimistic for the change of seasons. There is a reason how for ages this time of year has been associated with rebirth.

In raw economic terms, green shoots have become synonymous with the expression “growth scare.” Autumn uncertainty turns into winters of discontent. Unsure what to make of them, people typically go with what they know (or think they know). Economic growth is a given, therefore any negative association must be temporary; dare I say transitory?

This is how it went in 2014-15. Fall ‘14 was ominous not just in the sudden appearance of minus signs but more so because of how shockingly contrary that was from mainstream expectations. It would only get worse at the launch of 2015 before suddenly Spring.

Things seemed to look better without the snow (quite literally, as Economists had by then become infatuated with meteorology). Some actually said it was nice the world had avoided a growth scare. Green shoots abounded.

The most famous, really infamous example was Spring ‘08. The world became familiar with the word subprime in the Fall of ‘07, and then the name Bear Stearns at the end of the harsh Winter of ‘08. It wasn’t until Bernanke in 2009 that the term “green shoots” was actually used, but in those middle months of 2008 it was the prevailing theme nonetheless.

MS. YELLEN. The strong incoming data on spending eased my fears that we are in or are approaching a recession regime of the sort embedded in the last two Greenbooks.

LACKER. On the whole, I think the risk of the national economy sinking into a serious recession has receded, and the growth outlook has edged up a bit. I was relieved by the strength in retail sales in May as well as the upward revisions for April and March. The ISM indexes have steadied at right around 50 over the past four months; and although the labor market has been weak, it has not yet shown the accelerating declines that I feared.

MR. HOENIG. More broadly, turning to the national economy, I have revised up my growth estimate for the first half of 2008, but it has made little change in my longer-run outlook. Compared with the Greenbook, I see somewhat stronger growth in the second half of this year and somewhat weaker growth next year and in 2010. I continue to judge that the potential spillover effects from the financial distress have understandably been overestimated in this Committee’s recent decisions and in Greenbook forecasts in recent months. [emphasis added]

You’d be forgiven if you thought those quotes were taken from perhaps the FOMC meeting held in September 2007, maybe December. But these are from the transcripts of the JUNE 2008 meeting. Six months into what would later be called the Great “Recession”, policymakers were somehow seeing spring everywhere.

Recall what we noted last week in this very same setting. The Tuesday after Bear Stearns, March 2008, Bill Dudley spoke out loud to the rest of the FOMC what would come to define the entire global system for all the years in between then and now. Global banks watching this unfold saw one of Wall Street’s oldest and most respected names go dark in a matter of three days.

MR. DUDLEY. The lesson from that for a lot of firms is going to be, oh, I need more liquidity, I need to be less leveraged, and that lesson, from what happened to Bear Stearns, isn’t going to go away.

Why didn’t the FOMC heed that very lesson? How did they forget about it so quickly?

They really didn’t know what they were doing. They had no idea what they were really up against. Monetary policymakers don’t understand the system they think they are responsible for, nor the implications of how central banks are not central. Officials knew the banking system was going to be different after Bear, but then, they thought, so what? No big deal. Firms come and go.

By June 2008, they really felt this view was being vindicated. By Summer ‘08, the world began to witness the horror of how it wasn’t. Spring wasn’t a rebirth in the economy, it was merely the pause between global monetary squeezing. No one bothered to really look in the shadows in order to verify the optimism.

This is the stuff that I write about what’s behind federal funds. Federal funds in 2008 was a very different place, but even then it wasn’t nearly as big a deal as it was made out to be. Today, federal funds is nothing, an extraneous anachronism. And yet, this far out of the way monetary corner is picking up…something.

No one can directly observe this global eurodollar system, what is actually the world’s reserve currency. First of all, it is primarily based offshore from everywhere therefore outside of official recognition. There are no direct statistics. The term “shadow” is, in this case, perfectly appropriate.

But we know it is there. A quark, for example, is a fundamental building block of all matter, yet no scientist has ever observed one. Physicists know they are there because of how quarks affect things they can observe. It was indirectly confirmed by how it disturbed and agitated the world around it. 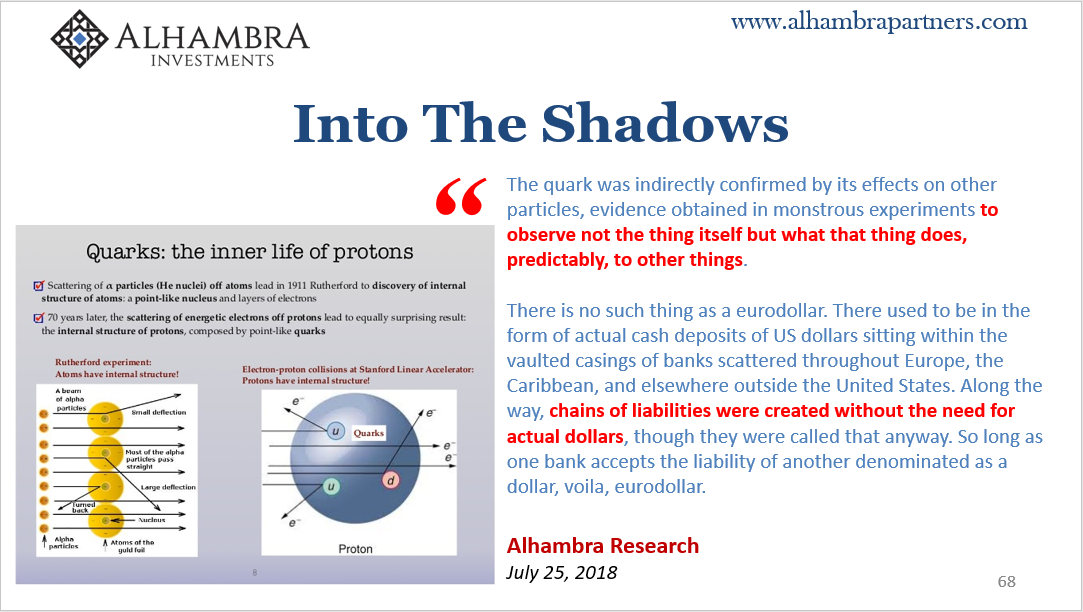 That’s our job in trying to understand the eurodollar; to observe, catalog, and interpret what we do see.

To that end, I’ve been fortunate enough to partner on several occasions with Erik Townsend of MacroVoices. Together, we produced a series called Eurodollar University. Erik brought to it his skeptical, journalist point of view. But also from the perspective of the audience. Extraordinary claims require extraordinary evidence.

They also need, as he often points out, as do most people I interact with, a more relatable and accessible format. This is very complicated stuff, I know, and, as the struggles of the FOMC emphasize, none of this shadow money is widely known. It is entirely unfamiliar, even to the people whose job it is to know better.

If the central bankers don’t know what the hell is going on here, and we are all taught in school what central bankers believe should be taught, the public at large is at a huge disadvantage right down to terminology.

In attempting to recraft and re-introduce Eurodollar University as, hopefully, more user-friendly both Erik and I went off to Harvard Business School late last month. We’d developed what we think is an overview for a starting point, hitting enough on the major themes without getting lost in the details. As he constantly reminds me, explain to the audience why they should care.

There was, apparently, enough of a demand for it that we’ve recorded largely the same presentation (with a few extras at the end) we gave at Harvard for broadcast on MacroVoices. It will be published this coming Thursday (April 18).

In it, we briefly touch on what I think makes this eurodollar idea so fascinating and compelling. Though, like quarks, we don’t see eurodollars we have mountains of consistent evidence for them. It spans enormous lengths of time and cuts across all types of data: from bank call reports and statements to government collected accounts to real-time market prices. It’s all there; if you know how to interpret it.

One of the key pieces we left out of Harvard, for the sake of brevity, was swap spreads. I can’t write enough about them. They are an enormously important indication for the one thing that the eurodollar stands for: the balance sheet capacity of the banks that are responsible for “printing” and redistributing this virtual currency.

And this is right where people tend to get lost. For me, I’ve been doing this so long it has become second nature. But in the spirit of a better, more accessible Eurodollar University, in advance of and association with next Thursday’s presentation, I want to take the time to explain in one way why you should care; what all the evidence actually says and what it means for the green shoot/growth scare attitude currently circling the planet, as well as the big long run picture.

Federal Reserve officials are getting ready a standing repo facility to better tame EFF. They’d be wise to instead figure out why it’s misbehaving in the first place, what is it that swaps are telling us is really going on out there in the shadows behind it.