Bonds and Economists At It Again

Bonds and Economists At It Again

Federal funds is up again. As of yesterday, the 29th, the effective rate (EFF) is now 5 bps above IOER. That takes it to within 5 bps below the top of the Federal Reserve’s policy range. According to FRBNY, the 1st percentile in yesterday’s session was 2.40%, meaning that almost the entire federal funds market is paying more than IOER. Where are the dealers?

If a scramble for liquidity shows up here, what is it like everywhere else where it does matter? The federal funds market is nothing more than leftover pocket change of the FHLB’s. But with these rates, there should be more than that going on. There is opportunity for any enterprising dealer to take advantage of risk-free spreads, to make something more than what it is.

And the profit opportunities just sit there. 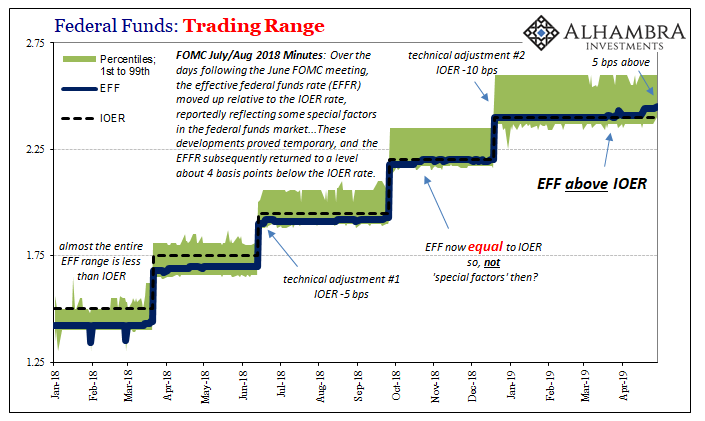 It’s not just here where the dealers publicly demonstrate their hoarding. If EFF is up you pretty much know what’s going on in the repo market. There is no obvious reason why month-end in repo should be so dry. We’ve become accustomed (though only during these Euro$ squeeze periods) to quarter-end runups in the GC rates. Month-end is something else.

That’s just what happened today. The final trading day of a middle month in Q2 2019 for some reason became extra special hard in terms of repo market liquidity. It’s not nearly the insanity experienced at the very end of 2018, but the GC rate for UST collateral was fixed today at 2.807% (DTCC). That’s nearly 56 bps above RRP (literally off the chart below), and a lot more than yesterday’s 2.534%. The GC rate for MBS was even higher, 2.915%. 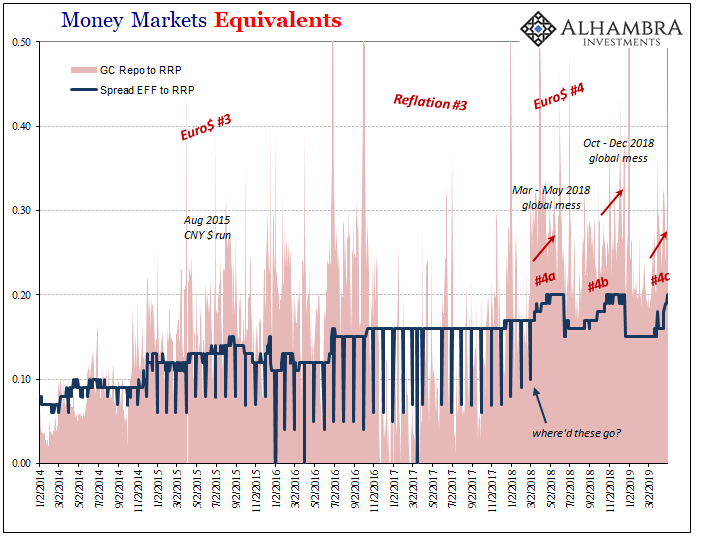 The few who do notice these vitally important indications will keep talking about T-bills or some other technical-sounding excuse. Meanwhile, going back to the original outbreak last year, the world keeps coming apart. The global economy’s minus signs keep piling up and proliferating.

If you are a big leveraged player, meaning just about every large financial entity on the planet, you can’t afford to be so sanguine or to keep your head stored so firmly, deeply in the sand. As illiquidity escalates with these warnings, the chance of the most dreaded phone call in finance rises.

The collateral call creeps ever closer, the one that can terminate your career and your firm if due care is not exercised. The lingering lesson of Bear.

Given this situation, it doesn’t matter one bit that you might agree with Economists. Let’s say you are ultra-positive on the economy. The unemployment rate in the US is the true picture of the domestic situation, inflation has to therefore rise. The world isn’t going to keep buying all the US federal debt, not with the economy on the rise and demand for UST’s dropping against that rising supply.

Those factors, however, don’t mean a damn thing today. All that does matter is EFF and repo (and interest rate swaps, as well as FX). Liquidity is primary over everything. The more these “benign” problems continue forward and intensify, the less relevant those other parameters will be. The bond market massacre can easily wait. A long time.

And that’s if you actually believe Economists.

They are thinking something else because they don’t get bonds. CNBC’s chief Economist Steve Liesman sent out a survey to a lot of others like him. Guess what? Surprise of all surprises, the Economists almost uniformly believe that Economists are right and the bond market must be wrong.

Almost two-thirds of them. 63% are still forecasting another Fed rate hike by the end of this year. Whereas bond and money markets continue to betting trillions on a cut perhaps more, not these guys. They are sticking with their econometric models where the unemployment rate cannot possibly be so faulty (again).

“The markets are irrationally pessimistic about the future. There is no recession coming,” wrote Chris Rupkey, chief financial economist at MUFG. “Cutting rates for low inflation at this time is ill-advised…The Fed should restart its gradual pace of rate hikes later on this year.” [emphasis added]

For them, green shoots and an overblown growth scare. It doesn’t matter that, according to the same survey, these same Economists had last year expected the 10-year UST yield to rise to 3.5% or more but now only expect 2.75% by the end of 2019. The difference is just transitory stuff. China trade tensions that will go away when a trade deal is done.

But that’s the thing. Here we are one-third of 2019 in the books already and EFF keeps showing up Jay Powell; repo keeps doing remarkably disruptive things. And the economic data continues to follow the obviously illiquid nature of global money – as do bond yields. Even the US economy’s biggest (purported) boom in a long time has proved vulnerable, pulling up especially lame recently in all the key components (income most of all).

None of these Economists ever studied Bill Dudley.

We’ve been here before, of course. What I wrote in May 2014 could’ve easily been written today:

That sets up another “titanic” struggle between economists and money markets – academic models against those with actual money positions. The economist side sees taper as a signal that the economy is going to take off (as intended under the Bernanke scenario of influencing expectations), whereas the credit and dollar markets may be coming around to taper as optimal control, preserving policy margins ahead of economic turbulence.

We know which side stocks are betting on.

Stocks didn’t care, outside of seven months starting August 2015, that Economists got it wrong for the third time in the last almost twelve years dating back to Bill Dudley’s first ugly encounter with the curves in 2007. There was no recovery and acceleration in 2015, no big liftoff as had been planned by Economists and central bankers in 2014.

Even The New York Times two years too late finally fessed up and acknowledged what did happen instead.

Bonds were right. Euro$ #3 pushed the US economy very, very close to recession while the rest of the world suffered a variably intense nightmare. The way the markets are positioned now, that’s actually the upside to today’s confirmed Euro$ #4, the least worst case. If bonds are specifically right about rate cuts, that’s more of a downside still.

Then again, Economists and their models could just get lucky for once. That’s about all they have going for them at this point. When does it ever just work out great once all the biggest financial institutions in the world, despite what the Economists working for them say, all pile in on liquidity preferences? Pretty much never, especially when the reasons they are and have been are right there in front of everyone. 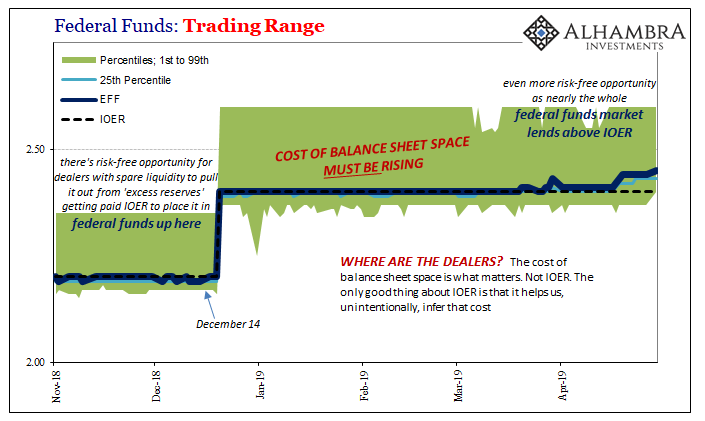