It’s a tell-tale sign of someone who doesn’t know what they are talking about. In the realm of global currency systems, anyone who brings up China’s massive stockpile of US Treasury assets inevitably they assign all the power to the Chinese. Xi could destroy Trump if he wanted, bringing down the US in a righteous fit of trade war anger.

Not only is this totally wrong, it is ignorant of history. Recent history. Toward the end of November 2013, out of nowhere a report appeared in Chinese State media which said officials were reconsidering their foreign reserve allocations. 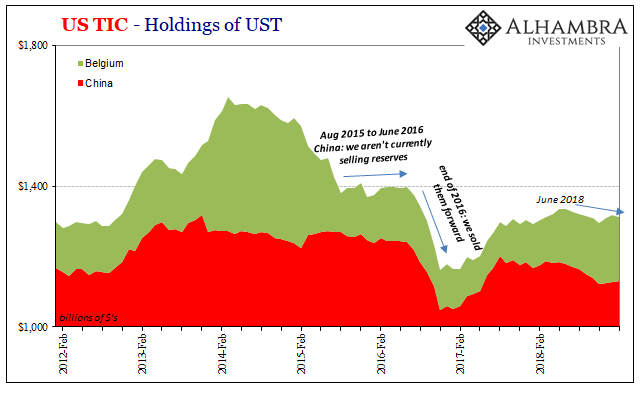 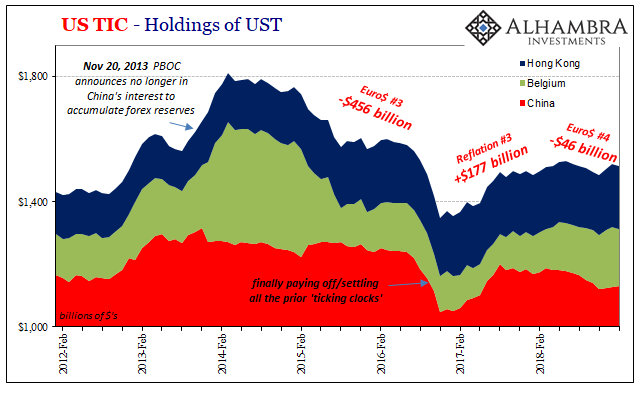 The country then spent the next several years shedding more than $900 billion in official reserve assets, more than half that in the form of reported UST holdings. The carnage, if the conventional story was right, should have massacred the market for US federal debt. Not only are UST yields lower today than when that announcement was first made, it was the Chinese economy indeed the entire Chinese system that had been transformed in between.

In late 2013, convention held China in high regard especially when it came to its purportedly invulnerable economy. But as they bled reserve assets, that view has shifted entirely. In 2019, the Chinese are leading the world in economic weakness.

In announcing that they would avoid UST’s five and a half years ago, what the Chinese were up to was very different. They were indirectly warning everyone, albeit in their own geopolitical fashion. I wrote in January last year when this “threat” last came up:

How, then, do we view the PBOC’s November 20, 2013, announcement? Over time, I began to see it as more like desperation, the kind of “oh we meant to do that” public statement that is oftentimes crafted only to reassure the public that what turned out to be a big negative was really what they meant to do all along. I have come to believe that by late in that year, Chinese officials knew what was coming (they already had a taste) and were trying to get ahead of the “rising dollar” so that it might not spiral, for expectations, anyway, out of their control (with the media playing right into it, the exact point of my March 2014 article).

In other words, they had some idea about what was about to be unleashed – and that it was aimed squarely at China. I think they underestimated its scale and depth, certainly the duration, but in terms of our idiot officials versus theirs, theirs were that much further ahead not that it made much of a difference in the end.

We all suffer for the lack of effective understanding about global reserve currency.

In escalating trade war sparring, another such media report has been issued just today. The Chinese have hinted how they are once more thinking they might sell their UST’s. Predictably, our media, quoting all the right “bond king” experts, sees it as a powerful threat.

For one, a Chinese reduction of Treasurys [sic] could weaken the dollar and make U.S multinationals more competitive. For another, Treasury yields would rise and thus cause prices to fall, lowering the value of China’s portfolio…

“To me, that is the biggest worry. This is really the biggest weapon they have,” said Sung Won Sohn, professor of economics at Loyola Marymount University and president of SS Economics. “They need to do more to counter the United States. So if push comes to shove, that’s what they are going to resort to.”

Again, were these people not paying the smallest bit of attention to what was going on the last five years? Did the dollar weaken as UST’s “disappeared” from reported Chinese custody? Were Treasury yields shooting upward as they did?

No. In fact, it was the opposite in each of those. The dollar goes up, yields go down, and all because of what the Chinese are actually saying. Even in 2017, everything was in reverse: UST yields rose because of reflation, the dollar fell, and China added a huge amount of UST’s while they did. Things get bad when Treasuries vanish from China’s official hands.

The fact that they are attempting to take credit, almost, ahead of time merely confirms the weak and desperate position they find for themselves in 2019. Just like 2013 and to a lesser extent January 2018. CNY DOWN = BAD, for China, certainly, but not just in China.

Funny timing, CNY and UST’s. It’s a damn roadmap to understanding how the global system actually works. You just have to stop listening to Economists and central bankers (redundant). 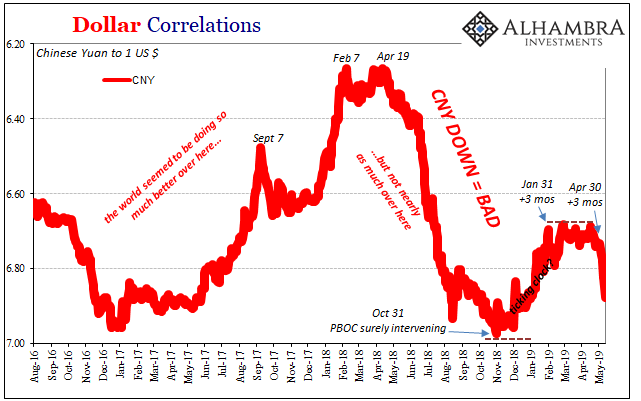 Just in time for China’s latest existential eurodollar threat, not only is CNY falling (right on schedule) it is being joined by a few other of its doom sisters. By Economists’ reckoning, UST yields should be surging higher given what has been threatened. Who is going to keep buying up the safest, most liquid instruments in the world if China can’t…I mean won’t?

Not only is the UST curve smashing downward, it’s further and further into rate cut territory. You can only conclude that something bad globally will have to happen to get Jay Powell to really embarrass himself not two years into his tenure.

Treasury yields are being joined, confirmed, in this latest bout of fear by both copper and JPY. Copper prices had boarded the “dovish” train in early January. They held up for the most part even in March as the next step in the global downturn developed. Since the end of April, though, in tandem with CNY and UST yields, Dr. Copper is coming back into the deflation column. 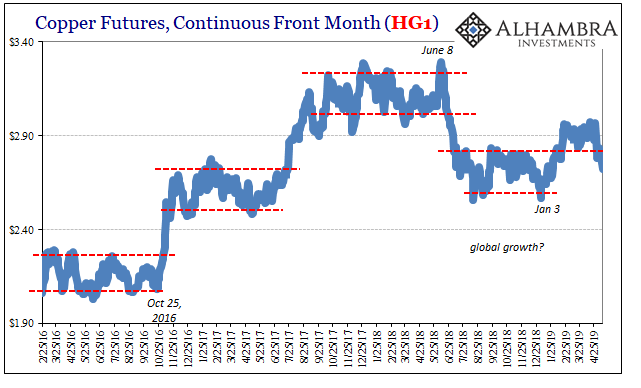 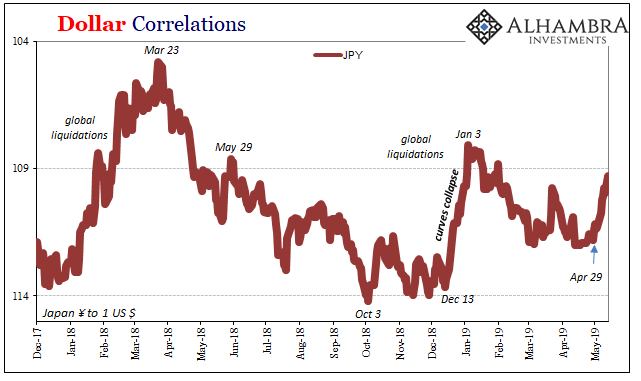 JPY isn’t what it used to be in terms of a global monetary center. The Japanese, somewhat prudently, have exhumed themselves from the mess of global eurodollar redistribution – largely because of what’s really going on in China.

Still, JPY can be an important short run signal. It’s much the same as 2015; whenever JPY rises, look out. The latest runup puts the yen in the same place as copper, CNY, falling yields, inverting curves, almost certain US rate cuts, etc.

Precisely the same as what ends up with China “selling” even more UST’s. Global eurodollar shortage. The Chinese government can make threats, but it’s pretty clear who it is that is really being threatened.

It’s the eurodollar’s world, we are all just trying to live in it. 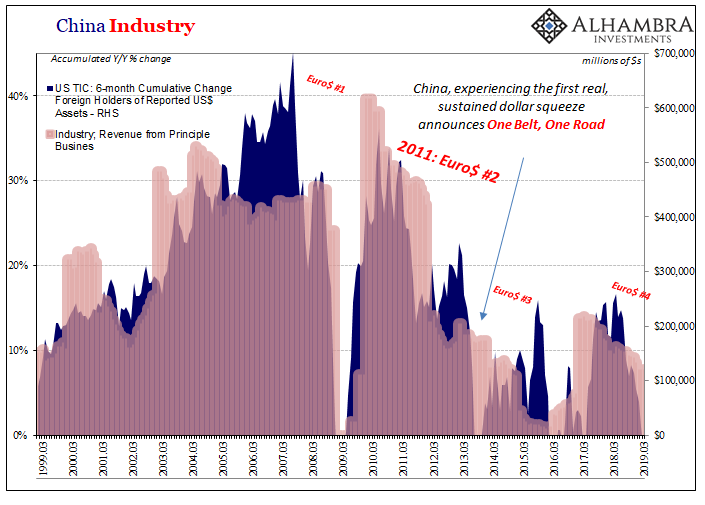