As Europe Keeps Falling, The Implications For Europe And Everyone Else

As Europe Keeps Falling, The Implications For Europe And Everyone Else

In late March, as global pessimism was renewed in the world’s bond markets, ECB President Mario Draghi appeared as he always does to urge optimism. Yes, Europe’s economy in particular didn’t finish 2018 as he had been expecting. But a soft patch, Draghi said, wouldn’t necessarily “foreshadow [a] serious slump.”

The question on the minds of bond investors is, how would he know? 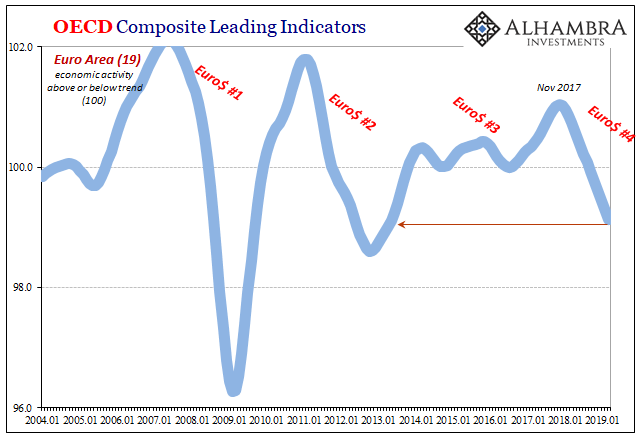 That’s ultimately the problem with botching globally synchronized growth. And he has no one else to blame. In hyping the hell out of 2017, way, way overdone, he and others like him, such as Janet Yellen and Jay Powell, set themselves up for statements such as this one delivered in Washington last month:

Nevertheless, since the Annual Meetings in October 2018, incoming data have been weak, in particular in the manufacturing and tradable goods sectors, reflecting a slowdown in external demand. This was compounded by some country and sector-specific factors that are turning out to have somewhat longer-lasting effects than previously expected.

By constantly choosing the over-optimistic interpretation of everything, Draghi has become the reverse Cassandra. In mythology, she was given the divine power to accurately predict the future but cursed by Apollo so that no one would ever believe her ultimately correct prophecies. Mario Draghi can’t predict anything, and yet everyone in the mainstream believes him no matter what.

Like the US Treasury market, though, Europe’s bond markets were never much convinced. As has become his typical pattern, before admitting to the current weakness throughout the European economy the ECB President will always couch it in the most favorable of terms. “The euro area economy expanded at a slower pace in 2018, following robust growth in the previous year.”

From boom to a little less boom doesn’t sound so bad, entirely the man’s point. It’s just that it’s not a valid one.

To buy his premise you have to believe Europe was, at some point, booming. Germany’s bond market, importantly, never did. Bill Gross was right about his “short of a lifetime” – if only he had first been right about the effectiveness of QE. Had it actually worked, created an actual boom, Gross’s investment advice would’ve paid off handsomely. 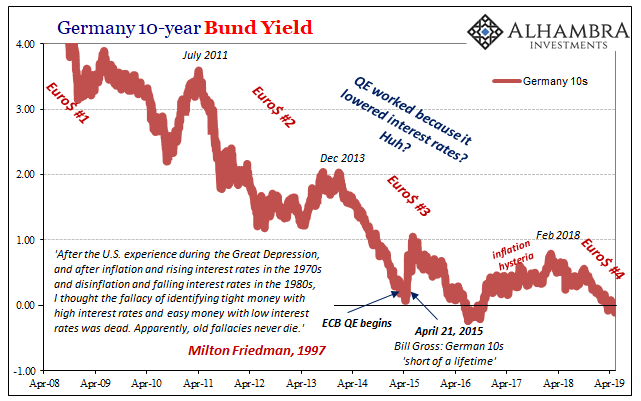 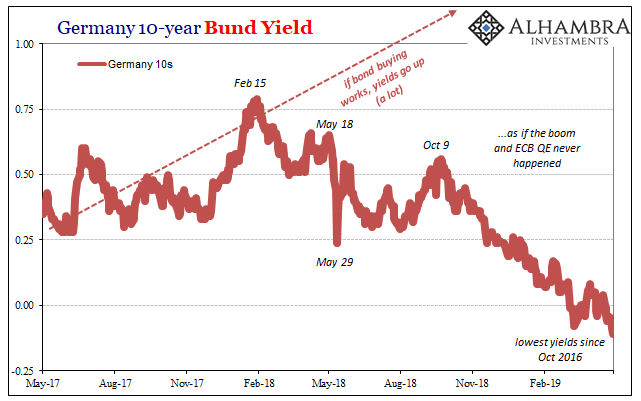 Even at the height of worldwide inflation hysteria, the only tangible results of Draghi’s work, German yields never got much higher than they were at the lowest points in their long history. Draghi kept saying boom, the bund market kept responding, we just don’t see it.

Now the ECB claims from boom to a little less boom. German bunds once again, we just don’t see it.

Ten-year yields yesterday and today were -11 bps and -10 bps, respectively. These were the lowest since October 2016, and very close to the lowest on record. This flight to safety is actually heightened liquidity preferences. There’s really no other reason why you would own a bund at -10 bps “yield” or a schaetze at -66 bps. 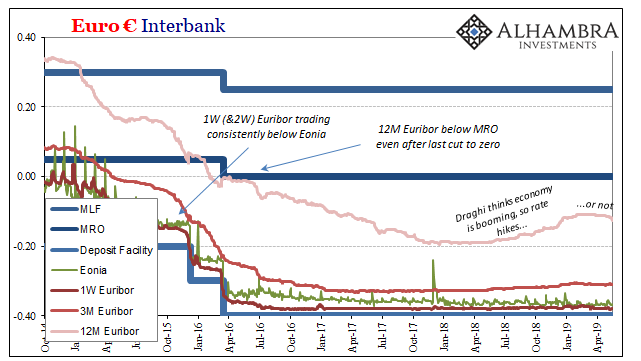 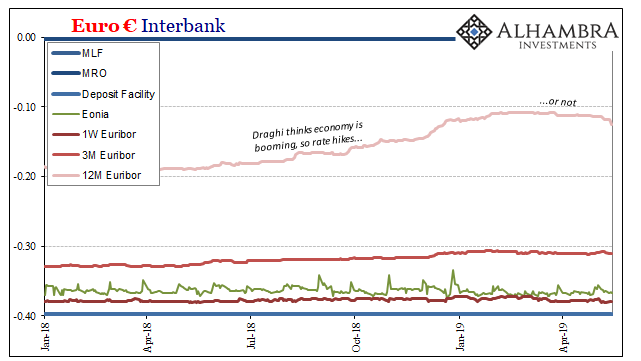 Quite naturally, given this progression, even money markets have turned on the man. Twelve-month Euribor, the unsecured rate for borrowing interbank euros for a year, had been moving up (meaning less negative) while Draghi was confident about his boom. That’s the thing about them, or those who see them, they tend to continue into the foreseeable future.

Therefore, so long as Draghi believed boom the euro interbank markets priced what Draghi believed. The 12-month rate rose in anticipation of the ECB’s first set of rate hikes.

No longer. Going back to the end of March, the prior plunge in bond yields before this current one, 12-month Euribor has reversed. In just the last three days, the rate has ticked down by a full basis point (it doesn’t sound like much, but you can actually see it on the chart above). This after giving up more than half a bp over the previous 14 trading sessions.

This doesn’t suggest rate cuts as US$ markets are; unlike the Fed, the ECB never got to the first liftoff. The slide in Euribor, more than just the 12-month tenor, says markets are betting like German bunds the probability of a liftoff, any liftoff, is heading back to zero. He may say soft patch, but that’s not what a very broad section of the most important euro markets see.

The implications, of course, are for much more than Europe. The European economy is obviously an important one for several reasons beyond its size. In terms of just sentiment, if Draghi had succeeded in creating a real boom, that would’ve been a substantial achievement. Perhaps the second sickest large economy in the world, behind only Japan, a Europe actually moving forward would have meant a great deal inside and out. 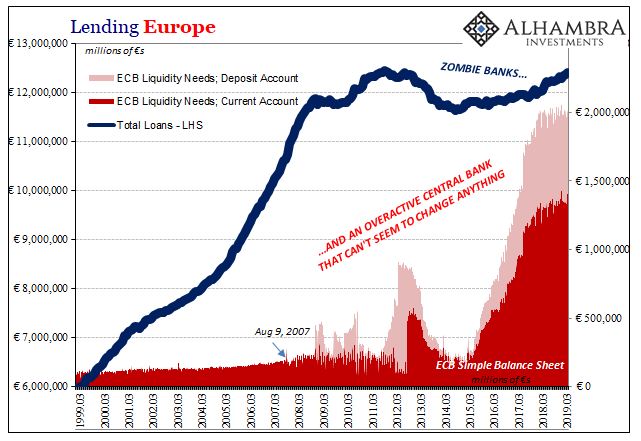 Going backward again, however, signals just more of the same unending malaise, proving only the ineffectiveness of extreme monetary policy experiments. Nothing has changed. Nothing had changed. German bunds, like UST’s, were right to be skeptical even during the “best” parts of 2017. Sour, not soar.

The more immediate problem is what Draghi said last month: “reflecting a slowing in external demand.” This slowdown even downturn perhaps recession in Europe is a symptom of the same negative potential as showing up in the rest of the global economy. The US very much included. Globally synchronized downturn is full of all sorts of other downside risks.

Euro$ #4 has registered in Mario Draghi’s speeches already, and though he may not yet appreciate what that truly means the world’s bond and money markets do. And they are betting he will before much longer. That’s not a very pleasant prophesy.