Japan’s Surprise Positive Is A Huge Minus

Japan’s Surprise Positive Is A Huge Minus

Preliminary estimates show that Japanese GDP surprised to the upside by a significant amount. According to Japan’s Cabinet Office, Real GDP expanded by 0.5% (seasonally-adjusted) in the first quarter of 2019 from the last quarter of 2018. That’s an annual rate of +2.1%. Most analysts had been expecting around a 0.2% contraction, which would’ve been the third quarterly minus out of the last five. 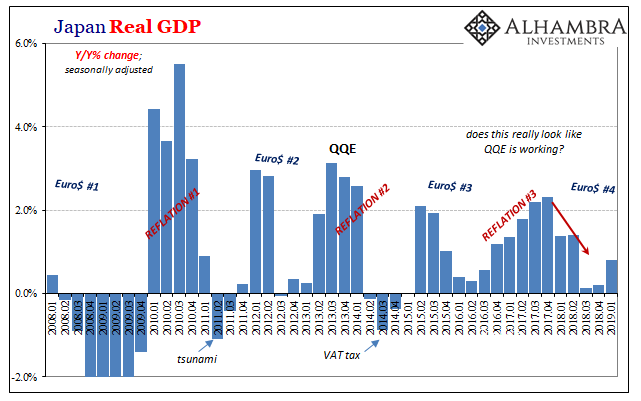 This is another one of those cases, however, where GDP accounting is beyond unhelpful. In the US, GDP in Q1 was boosted in large part by the bad version of inventory accumulation which counts as a positive regardless of intent. That was at least misleading.

In this specific instance, Japan’s number gives off the entirely wrong impression.

Despite this, probably because of this, one senior Economist for Capital Economics was widely quoted noting the Japanese economy’s “surprising resilience.”

Japan’s economy unexpectedly grew in the first quarter, giving Prime Minister Shinzo Abe some momentum to go ahead with his plan to raise the country’s consumption tax this fall.

The only reason there was a plus sign was a huge change in Japanese imports. On a quarterly basis, the reduction was a shocking -4.6% in Q1 from Q4. Year-over-year it was -1.7%, the first negative number since 2016. 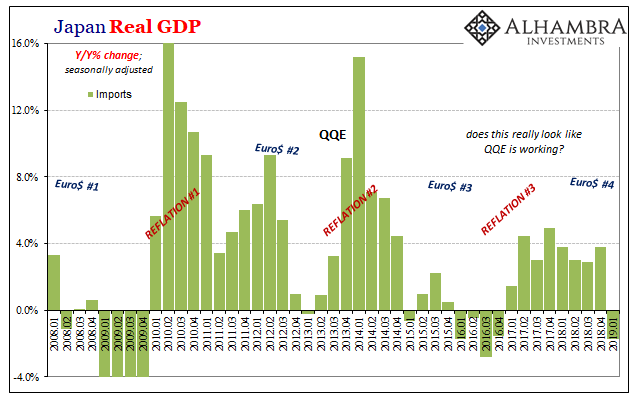 It doesn’t give a very good impression of overall Japanese demand. It’s not even resilience. In GDP accounting, though, negative imports are positive especially as a second derivative where the calculations come from. As a result, the big drop in imports “contributes” 3.4 percentage points to the 2.1 percent annualized gain. 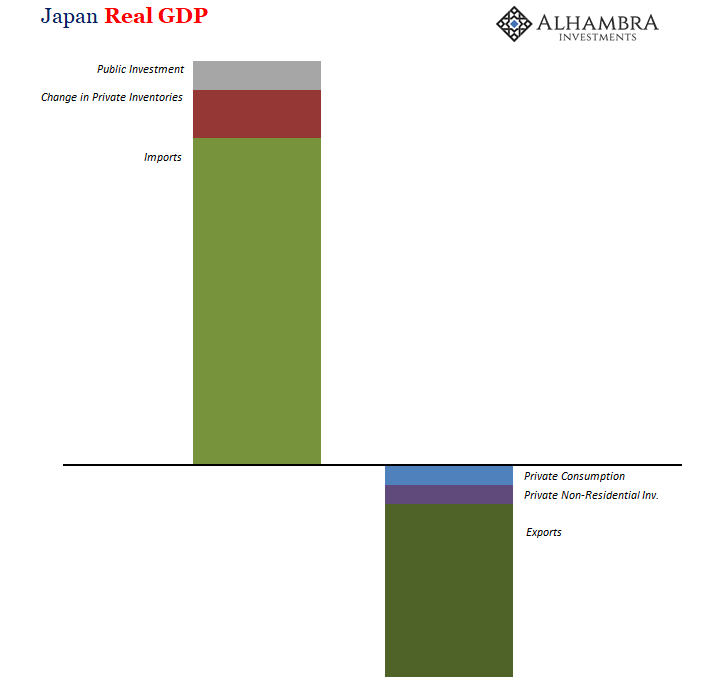 That’s because almost everything else was on the minus side. Private consumption declined in Q1 (Q/Q) for the fourth time in the last seven quarters. It subtracted about one-fifth of a percentage point from GDP. As did Private Non-Residential Investment. Capital spending has fallen in two of the last three quarters.

The largest reduction was also due to Japanese trade. Exports in Q1 declined 2.4% from Q4. Year-over-year, exports from Japan fell by 2.6% – the biggest minus sign since the first quarter of 2013. Global trade, global economy, global money. 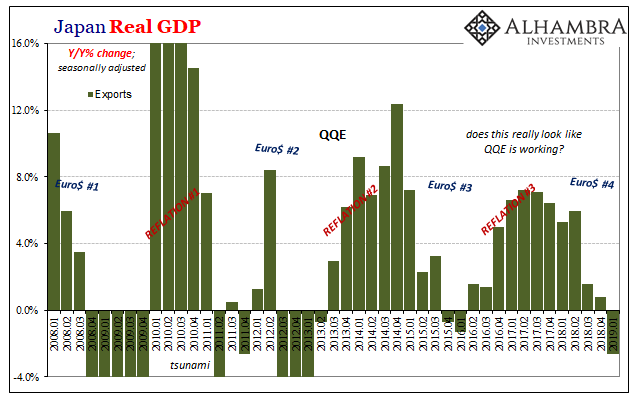 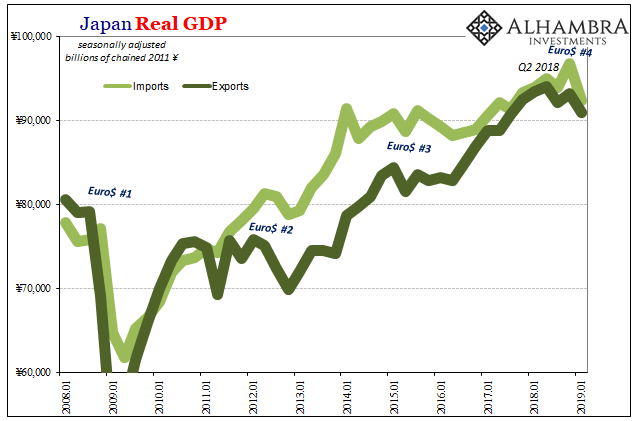 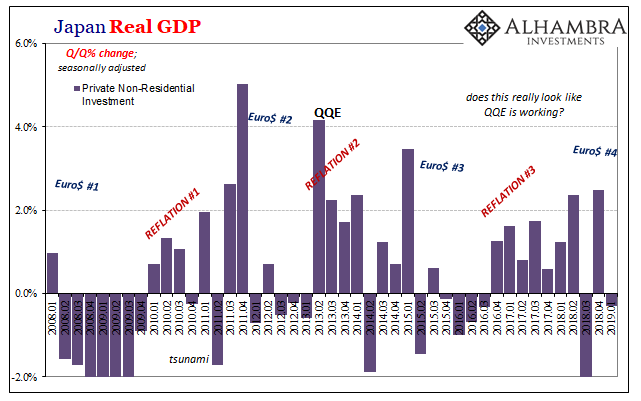 Though the headline came out positive, there was nothing at all positive about this GDP report. Japan’s surprising topline actually confirms Euro$ #4 to a substantial degree. Economists will see Japanese GDP as Japanese GDP rather than another piece of the global whole. And even then, they are fooling themselves by thinking this is anything other than another disaster for QQE, Abenomics, and the whole.

Which is why, as usual, Economists will use the flaws in GDP accounting to try and hold on for yet another quarter before it might all fall apart. It is, in many ways, the last gasp of globally synchronized growth and inflation hysteria.

Neither of those were meaningful economic trends, careful and rational interpretations derived from honest analysis. The whole point behind globally synchronized growth was to make the world believe in the puppet show(s). The hope was that by over-hyping even outright lying about the state of the economy people would act as if the boom was real.

It would then, orthodox theory posits, become real.

Inflation hysteria took it to the next level simply because the boom wasn’t. It is as old as the current neo-Keynesian textbook, the intended manipulation of expectations. Things were going to get so good, they said, the world finally had to start worrying about rapid inflation for the first time since before 2008.

And by thinking about rapid inflation for the first time in a decade, people would start to believe (and act) as if the economy was getting back to the way it was a very long time ago. In central banking parlance, raising inflation expectations was stimulus because it reduces the current level of real interest rates. Nowhere would that have been more noteworthy than Japan.

But where economic recovery-driven inflation was supposed to be, global monetary deflation showed up instead. Just like 2014. For the last year, year and a half, it’s been a struggle defining the overall global direction. More and more, though, Euro$ #4 is the only factor that shows up all over the world.