Reality has begun to dawn across Wall Street’s Economists. This year isn’t going to go the way everyone thought. Even as late as last November and December, the optimism was still sharp about how what was taking place at that moment would be nothing more than a transitory soft patch. They still listened to Jay Powell.

In its projections for this year, 2019, JP Morgan’s strategists were not truly dissuaded.

Given a Fed that continues to tighten against the backdrop of increasing Treasury supply, J.P. Morgan forecasts 10-year yields will rise to 2.95% by the second quarter of 2019 and to 3.2% by the end of the year.

Incredibly, these projections were put together on December 20, 2018. Powell had just recently reiterated his strong economy view, the one requiring more rate hikes, the Fed pause still only whispers at that point. Curve collapse was a triviality, apparently, in the face of central bank backbone. 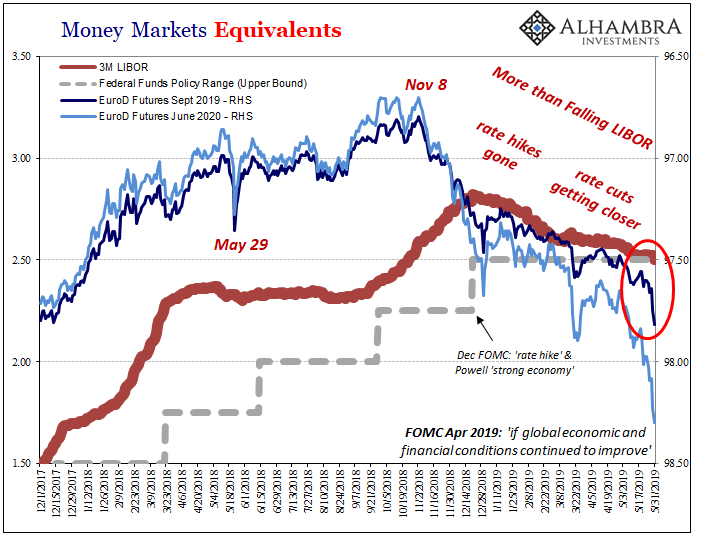 The same bank’s same strategists have now thrown in the towel. Not all the way, at least not yet. They are now calling for much lower rates on the “strength” of at least a couple rate cuts.

According to Bloomberg, the bank is now predicting the 10-year will be just 1.75% by the end of 2018 and 1.65% by next March. Pretty stark contrast compared to what JPM’s CEO was saying at this same time last year.

Even so, as the article notes, this isn’t something they think should be feared. Oh no, there’s a lot to be optimistic about, a lot still left in the tank because the Fed will be on the move!

Despite their new forecasts, JPMorgan’s strategists warned against jumping on the current Treasuries rally, saying that they maintain a neutral call for duration. “We are hesitant to initiate longs given the pace of the rally over the last two weeks and the substantial uncertainty that remains around the path forward for trade policy.”

For their part, JPMorgan equity strategists led by Mislav Matejka still see the potential for gains in global stocks before the next American recession, bolstered by policy support and, in the U.S., buybacks.

If you think trade wars and rate hikes are what led us to this point, then the prospects for a trade deal and rate cuts lend themselves an upside out. If enough can go right, still the soft patch. After all, according to this view, the economy would otherwise be booming.

This remains the background case for most Economists. One appearing on BloombergTV was far more direct in revealing himself this way:

“It’s just a mindless bond market rally — once it gets going, it gets going,” the chief financial economist at MUFG Union Bank said in a recent interview with Bloomberg TV. “I don’t know who’s trading these markets. It doesn’t feel like its [sic] trading completely logically here.”

This is the distilled wisdom of the mainstream view, this serious malpractice on the part of the media. All throughout the past few years, it has been reported as fact that the US economy was booming; and even more so why it was. QE had worked, therefore the monetary and financial system cannot be at anyone’s issue.

This view was reported as fact despite the fact that it was the contrary, minority position. This wasn’t how it was ever presented, of course, how it was only ever Economists and central bankers who held to it. The long end of the bond curve, indicating the thinking for the vast majority who matter, never once felt the economy was anywhere near the conditions necessary for taking off. 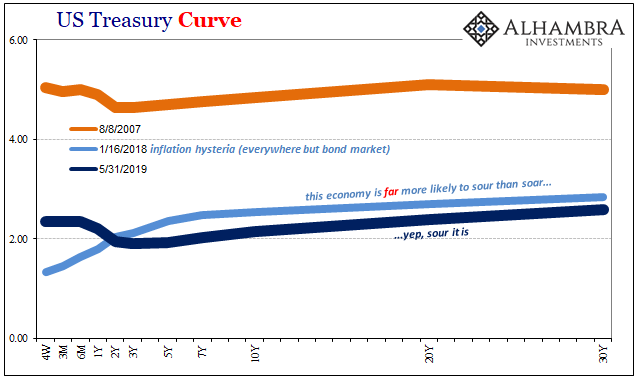 The various financial curves are treated as out-of-the-way niches, some mysterious triviality about which only a few cranks bother to keep track. Jay Powell is described as a towering figure, the man upon whose opinion everything else flows. It is entirely the other way around.

The bond market is what runs the world. Always has. Therefore, even in 2017 this idea the global economy was about to take off was never more than wishful thinking. If the bond market was against it, that skepticism was always the base case in reality. The bond market in addition to being much larger than stocks could ever hope of being, it is made up of agents whose actual practice (and survival) brings them in close contact to the real money of the real economy.

Economists never had any real market support for their view. Not at any point.

And this is why people have such a hard time understanding the way the world goes. When you are taught the backward, mainstream version, the bond market doesn’t make any sense. “It doesn’t feel like it’s trading completely logically here.” Except, the curves have been making the most sense, and have been most consistent in data therefore forecasting than any other place.

Curves are important notices for every economic situation, but you only hear about them when they are inverted. This isn’t some brand new disagreement. MUFG Union Bank’s Economist is of a blue line believer. 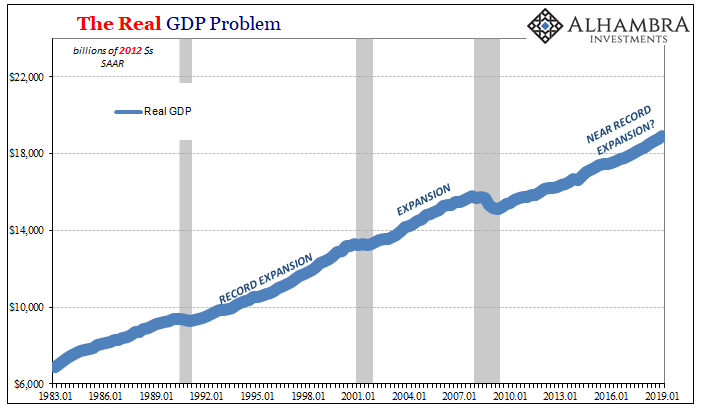 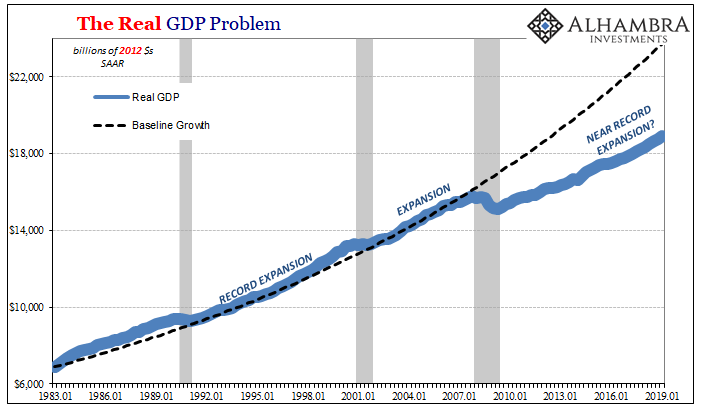 The bond market appreciates only too well what the dotted line has meant all along. Nothing has changed since August 2007. There was only ever a much higher likelihood something would go wrong before it could ever go right. In a nutshell, that’s just what May 29 represented – the very thing that went wrong and proved, all over again, how QE was at best an asset swap and at worst a harmful monetary head fake.

You can’t fix a broken monetary system with a head fake. You can try, but in the end you’d only confuse Economists. 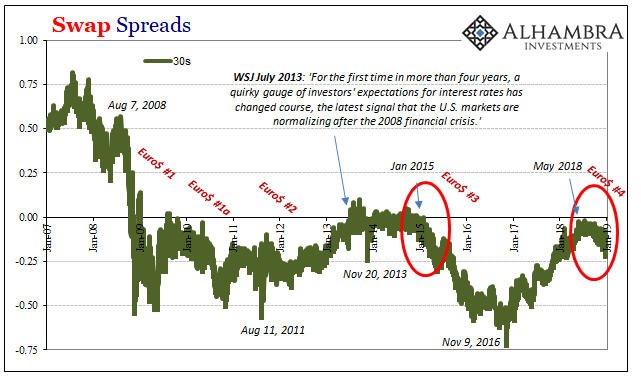 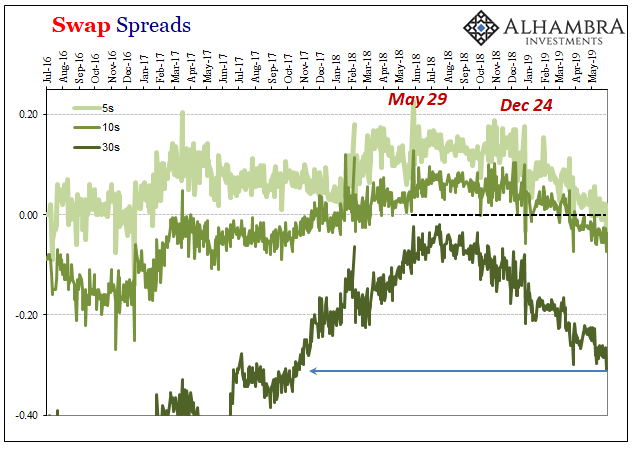 With rate cuts becoming more and more the accepted base case even among these people, you really have to go back to the curves and see the last few years evolve exactly how they predicted. The Economists are already partway to admitting this as true. They’ve already gone from BOND ROUT!!! to rate cuts.

This was no trivial journey. BOND ROUT!!! always meant something specific, the inarguable case of recovery. It would’ve been the point at which central bankers had finally convinced the market the liftoff was more than emotional pleading. I wrote last March, with hysteria raging:

In my view, it’s perfectly clear today that to believe the paradigm is changing is to do so from the same blind position of monetary illiteracy. That’s why it’s been to this point nothing but hype.

To now see the mainstream shift toward rate cuts, it doesn’t matter that they will try to say these will help. By the very fact they have given up on the BOND ROUT!!! it shows the boom was only ever hype. Never happened.

There’s was never the majority position. The recovery was always, always the long shot. It was only presented the other way around by a financial media that does the public a tremendous disservice. The bond market never once climbed aboard the boom. And once you see that, you cannot help but appreciate the very real dangers of 2019.