Again, who’s following who? As US Treasury yields drop and eurodollar futures prices rise, signaling expectations for lower money rates in the near future, Federal Reserve officials are catching up to them. It was these markets which first took further rate hikes off the table before there ever was a Fed “pause.”

Now that the Fed is paused, it’s been these same markets increasingly projecting not just a rate cut or two but an entire series of them. Playing from behind once more, Chairman Powell today signaled how the FOMC will vote for what he still thinks is accommodation – if conditions warrant it. The economy is, he reminded everyone, still very strong.

He just wanted the world to be relieved given this presumed monetary policy backstop.

Yesterday, St. Louis Fed President James Bullard once again brought up the Asian flu scenario. Maybe that backstop could be just a few rate cuts like Alan Greenspan in 1998.

A downward adjustment of the policy rate may help re-center inflation and inflation expectations at the 2 percent target.

Why does a strong economy and labor market with the unemployment rate the lowest in fifty years need help to “re-center inflation and inflation expectations?” Something obviously doesn’t fit here, and Fed officials are more and more trying to make trade wars into that something.

When Greenspan “tweaked” federal funds twenty-one years ago he did so with that rate already above 6% – and Bullard wants to compare the current economy that apparently can only manage 2.25% with that one?

For all their talk and massaging, they know they are on the wrong end here – starting with inflation and the unemployment rate. This isn’t working out anywhere close to the way it was supposed to. The reason? Nobody outside the media (and laypeople who rely on the unemployment rate to tell them the economic condition) ever believed that much in their view.

As noted yesterday, the inflation/acceleration scenario these guys have been peddling has never once been the accepted baseline. None of the markets ever really bought into it, including inflation expectations. It didn’t matter much at all how low the unemployment rate tumbled. 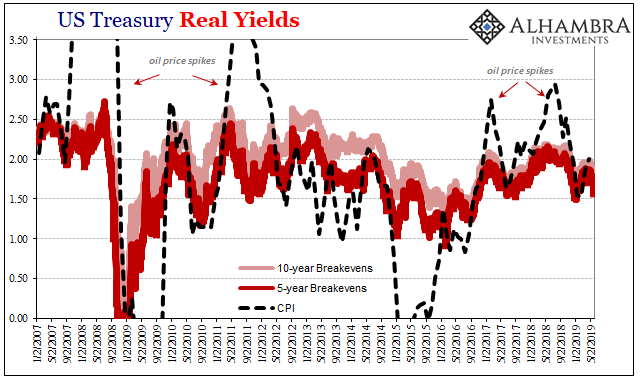 Even when oil prices were rising (in annual comparisons, WTI is still well below the 2014 peak) the TIPS market wasn’t chasing them. Given a longer run view of the CPI, inflation expectations have remained subdued throughout those price spikes.

And now they are falling again as the curves distort more and more. That rotten and entirely too familiar deflationary feeling is what is spreading. 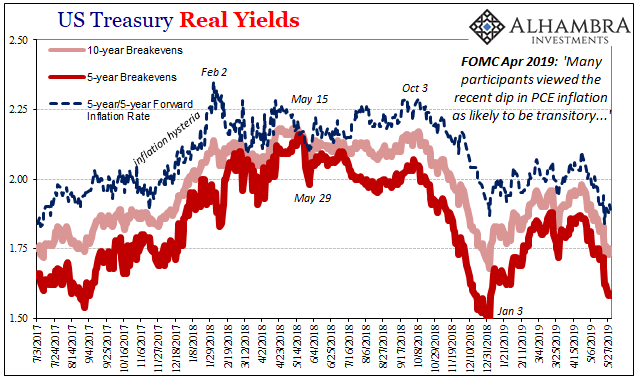 In a lot of ways, what Powell and Bullard have admitted about rate cuts and standing ready is another flip flop on inflation, the second big one just this year. Not that long ago, the minutes published for the April/May 2019 meeting, the FOMC was claiming that inflation would pick up again because of “transitory” factors. If that was actually true, then why any need for even a few rate cuts as insurance?

They’ve begun to turn against transitory, too. 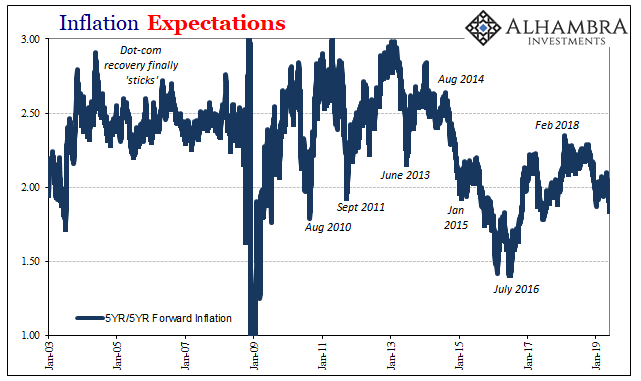 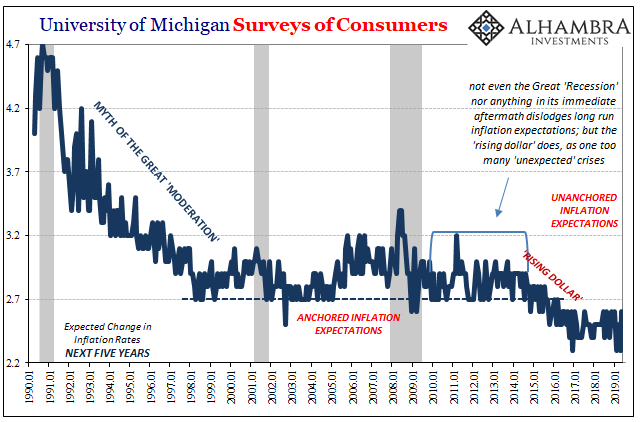 There’s was never the majority position. The recovery was always, always the long shot. It was only presented the other way around by a financial media that does the public a tremendous disservice. The bond market never once climbed aboard the boom. And once you see that, you cannot help but appreciate the very real dangers of 2019.

Perfectly uniform rejection of the mainstream view, meaning it never really was the mainstream view. Bond yields, eurodollar futures curve, swap spreads, inflation expectations, etc. It truly was inflation hysteria, one whipped up often purposefully by these officials who hoped things would go just right to get out of it but deep down know especially now that they are in real trouble – but can’t say it.

At least not until it is absolutely obvious to everyone around the world. The curves have made it obvious and are continuing to do so. Thus, rate cuts which not all that long ago were said to be unthinkable are now already in both mouths of Janus Powell. 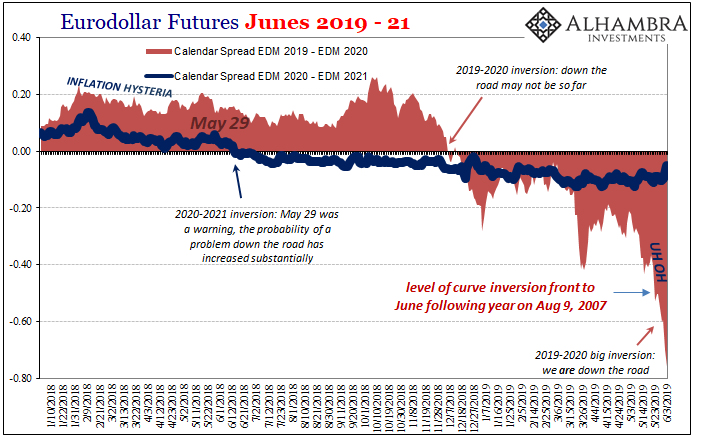