The Speed of Sour: LIBOR Now Inverted, Too

The Speed of Sour: LIBOR Now Inverted, Too

Last week, for the first time since February 2008, the LIBOR curve inverted. The 3-month tenor has been on the move downward for some time. The 1-month rate has been gentler in its slope. Last Thursday, the two finally crossed. As unnatural as inversion in the UST curve or elsewhere, it’s another sign of imminent rate cuts.

I am somewhat reluctant to point out how it was on August 9, 2007, when this same thing happened for the first time last time around. It doesn’t mean we are repeating 2008, only that the market perceives substantial negative factors which are going to lead the Federal Reserve to begin reducing the interest it pays on its money alternatives soon.

Almost certainly at the end of next month. 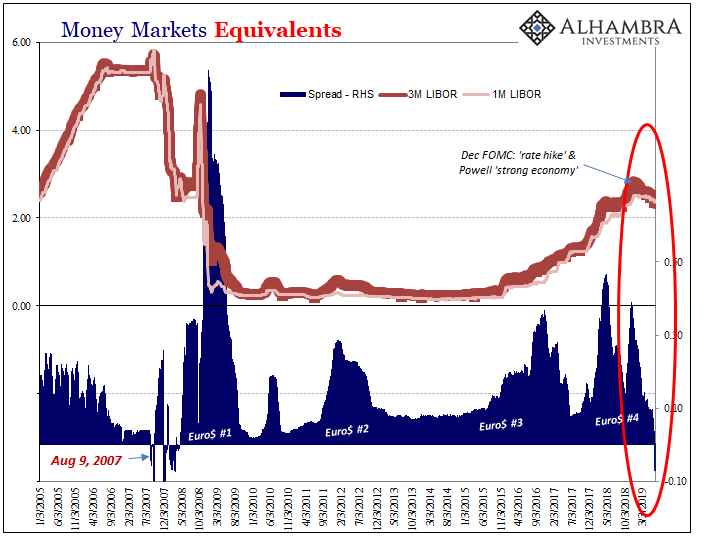 The stock market view of all this is predictably one of near giddiness – more punchbowl! This is shared to a lesser extent by policymakers themselves. They are in public claiming that one or any rate cuts are nothing more than insurance for an otherwise strong economy to stay that way.

The problem with the two is that in many ways they rely on each other. It was, after all, record high share prices which encouraged Chairman Powell to be more hawkish in early 2018 after the uncertain start to his tenure. And then, a year later, it was the rebound in stocks following November and December’s plunge (the landmine) which kept the FOMC from outright panicking.

Just today, Mr. Powell said that one month ago things were looking up:

When the FOMC met at the start of May, tentative evidence suggested these cross-currents were moderating, and we saw no strong case for adjusting our policy rate.

What “tentative evidence?” The only markets which were suggesting an improvement were those share prices at the NYSE being set by the idea of a dovish Fed. Everyone then ignored what was otherwise a consistent downturn in the real markets. They quite conspicuously skipped right over April 17 even though it showed up in their own backyard (federal funds).

It’s not just that rate cuts are now certain; it’s more so the speed with which even these central bankers taking cues from equities are having their minds changed for them. Just last week, at the previous policy meeting, the Committee finally gave in to the idea of rate cuts – for next year.

The central bank predicts one or two rate cuts in its set of economic predictions, but not until 2020. Despite cautious wording in the post-meeting statement Wednesday, markets are still betting the Fed cuts, as soon as July.

We now count LIBOR’s inversion among the indications that these people have no idea what’s going on. Authorities are being pulled kicking and screaming in a direction they absolutely don’t want to go. As such, here’s the rest of Powell’s quote from today. It’s a beauty:

Since then [May], the picture has changed. The cross-currents have re-emerged, with apparent progress on trade turning to greater uncertainty and with incoming data raising renewed concerns about the strength of the global economy.

No, no, no. That’s not what happened at all, starting with trade. In fact, markets, those that matter, have been perfectly consistent for now nearly eight months. I always write that nothing goes in a straight line, and right now I’m being made to eat those words. This is about as straight a line as markets may ever traverse in either direction: 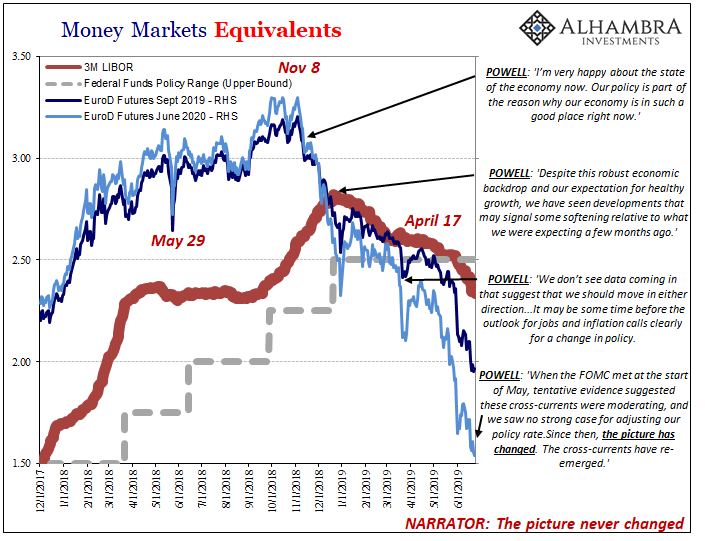 In more important terms, these prices and indications have been very consistent (about the landmine) in a way policymakers haven’t. Again, they are having their minds changed for them, and the speed with which it is taking place is itself a flashing indication of the gravity of the situation.

Official deterioration which is now priced in the LIBOR curve is the only thing anyone should pay attention to when it comes to these people. When you start out (late 2018) thinking robust economy and several rate hikes only then within weeks to shift to a Fed “pause” and then a few months later rate cuts but next year to a month further debating whether a 25 bps or 50 bps one to start with in July, things must be going sour very quickly.

After all, if the most optimistic group of optimists, the most likely to keep their heads firmly buried in the comfort of NYSE sand, has their position changed so radically in such a short period of time we have to be confronting a substantial downside.

Rate cuts are not going to be insurance; they are the alarm bells. 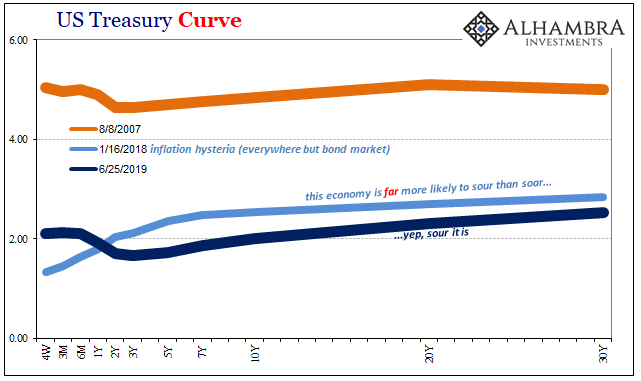